Q&A: Tyler Adams on Adjusting to Germany and a New System with the U.S. MNT

A lot has happened for U.S. Men’s National Team midfielder Tyler Adams since we saw him in November. The 20-year-old midfielder has moved to RB Leipzig, where he’s become an integral part of the midfield for a German Bundesliga club pushing for a UEFA Champions League place. While his focus has been on making his way with a new club and in a new culture, he’s also kept a keen eye on what has transpired with the MNT under new head coach Gregg Berhalter.

ussoccer.com caught up with the Wappingers Falls, N.Y. native to see how his transition to Germany has gone and his impressions of the MNT going forward…

ussoccer.com: Watching from afar, what were your impressions of what you saw from January Camp?

Tyler Adams: “Getting a new coach, there were new opportunities for a lot of guys. I had the opportunity to go to January Camp last year, and having a new coaching staff this year we knew it was going to be different. When I made the move to Europe, I wasn’t able to participate in that, but there were a lot of guys that I was excited to see make it - guys like Djordje Mihailovic, who I played with at the Youth National Teams, and Aaron Long who I know from the Red Bulls and captained the team in the games against Panama and Costa Rica. It was exciting staying up late to watch and see how they developed over the course of two games. ussoccer.com: You guys are always texting and talking through the social media. What did you hear from your teammates that were part of January Camp?

TA: “Specifically, I had good conversations with Jeremy Ebobisse who is another guy I know from the Youth National Teams and someone I’m really close with. I spoke a lot with Aaron Long too. They were so excited about the vibe of the camp and how everything was going. Obviously things were changing with a new coaching staff, but I heard a lot about the energy level, how the training sessions went, the attention to detail and how they wanted to play. They were giving a specific identity to the team and the importance of the different variables that go into everything we do.

“Those guys were obviously excited and the first thing they said to me was, ‘You’re going to have so much fun when you come into camp.’ Obviously as a player watching from afar, that’s what you want to hear. Whenever you’re able to put the crest on and have a smile on your faces, that’s an exciting feeling.”

ussoccer.com: And so, watching those games from abroad, was it evident to you that there was a shift in the style of play?

TA: “Absolutely, but having played many games against Columbus before, that identity was so clear there with the players they had to fit that style of play. Playing against it was never easy, so I think it definitely challenges defenses and that’s the most important thing.

All in all, we want to go out there and get results, but at the same time, we want to change the way people view soccer in the United States. Other nationalities sometimes look down on soccer here – maybe it hasn’t come quite as far as it could have yet. We want everything to come full swing. We’re part of that movement now.” ussoccer.com: To get guys that were not part of January Camp up to speed for these games, Gregg has said he and his staff had video conferences with you guys. What did you take away from those sessions?

TA: “The first thing I noticed was the attention to detail and how they convey it. There’s so many little details with how we want to play -- the movements that open up different players defensively and offensively, the different variables and perspectives that you can take, and certain positions and roles you can take. It’s something that you have to pay close attention to and the guys in January Camp had a full month to try and grasp as much information as possible.

“For those of us coming back from Europe, we have to grasp as much as possible on the fly, but the coaching staff has done a great job being in contact coming into camp, showing video and graphics of how you move and what positions they want you to take up. They’ve been lengthy discussions, but they’ve been good ones.”

“You want to be as prepared as possible coming into these camps and you want to be right on cue with your attention to detail. For me, I’m obviously focusing on something different in Germany, but in my downtime there I’d hope on a Skype call and be shown this information that in a few week’s time gives me the best preparation and opportunity to succeed when I get in camp.”

ussoccer.com: Gregg has said that he wants to try you at right back in this system. How do you think your skillset fits with that position in this system?

TA: It’s definitely an interesting role. Nick Lima did a good job with it in January Camp and I’ve had the conversations with Gregg that have helped me understand what he wants from it. 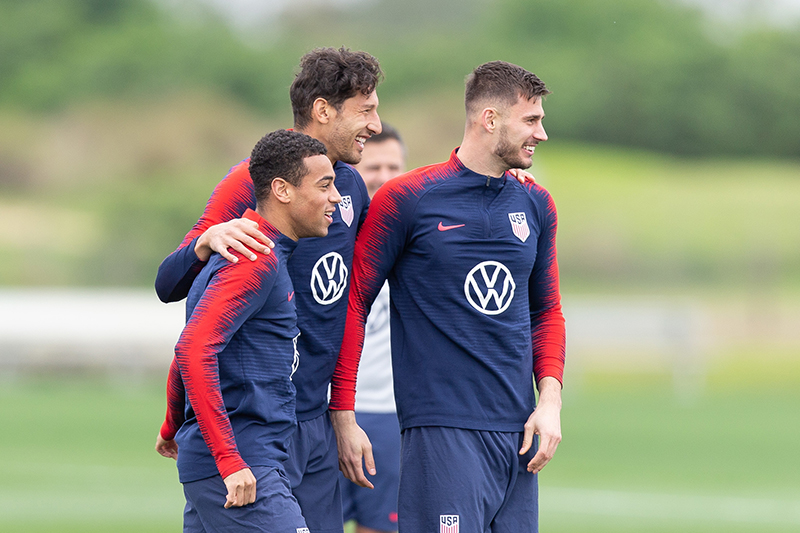 ussoccer.com: While a number of young guys got their chances with the MNT last year, there’s been a shift in the last few camps as more veteran players have come back into the fold. How do you feel about having more experience around this group?

TA: “I absolutely think it’s crucial to help the team develop in the right way. As a young player, it’s a little bit different. Of course you want to be around all your buddies and connect with guys your age, but the veterans offer experience that we don’t have. I think whether it’s leadership on and off the field and being able to connect in different ways is important.”

ussoccer.com: In January, you made the big move from the New York Red Bulls to RB Leipzig in Germany. What have been the biggest adjustments for you?

TA: “The jump to Leipzig has gone about as well as it could have. A lot of people see what takes place on the field, but for me it’s the work I’ve tried to put in off the field – understanding the language and the coaches getting me up to speed with the tactics. In New York we played a similar system, and having [former New York Red Bulls head coach ] Jesse Marsch make that jump as an assistant coach before me has helped get me up to speed as well.

“Having a short break after the MLS season, getting back into the swing of things with a good preseason and trying to make teammates trust your ability and want you to be on the field with them has been the biggest thing. Now that I’ve earned the respect of some of those guys, everything is going smoothly.” 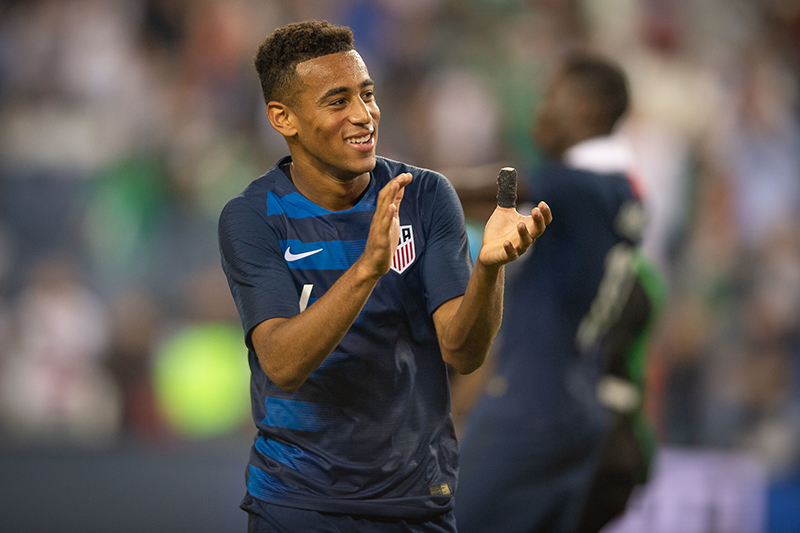 ussoccer.com: What is the funniest thing that’s happened to you living in Germany?

TA: “A lot of people in Germany speak English, but sometimes you run into a situation someone doesn’t. I went to the grocery story one time and they only spoke German and they have such different accents in Leipzig.

“I tried to use my card at the cash register and I was just standing there, wondering why this lady was just staring at me. She wasn’t saying anything except this one word in a German accent that was harder to understand. After a few minutes wondering why she didn’t give me my receipt and looking at my card sitting there, I just gave her cash and left.

“I came around later and figured out that she was asking me to type in my pin number, but I didn’t think I was using a debit card!

“It was so funny because she’s just standing there. The line is stacking up behind me and I’m just like, ‘Sorry guys, I don’t know what’s happening!’ They’re looking back at me wanting to get through the line. It was pretty funny.”

ussoccer.com: Has there been a culture shock moment yet?

TA: “No real culture shocks. We have so many foreigners on our team that it’s not a typical German locker room or staff. Obviously the language is German, that’s not going to change, but when you have French and Scandinavian guys that all speak English – that makes for a pretty calm environment.”

ussoccer.com: And since you’ve joined RB Leipzig, the team is unbeaten in the matches you’ve played, third place in the Bundesliga…

TA: “Don’t jinx me! Everyone that wants to talk about it. I’m scared they’re going to jinx what we have going right now…"

ussoccer.com: Okay… Rephrasing that question… Is it fair to say you’re happy with the success you’ve had so far in Germany?

“So far, so good. I think that there’s so much to improve on still and so many things you want to do well. For me, it’s just making sure I’m in the starting XI every game now. I want to provide a positive influence on the team and now we have some big games ahead of us, so I’m excited for the second half of the second half of the season to get underway.

ussoccer.com: A year ago, we were visiting you at your parents’ house and driving with you to training for your RISING video… Now you’re playing in Germany, starting for one of the best clubs in the Bundesliga and making strides with the National Team… Is it crazy to think about how everything has worked out?

“I feel really fortunate to have things work out like they have so far. I think to go into a club where there’s so many familiar faces I’ve seen around New York before, because they were always checking in on our club. It’s nice to go and make this transition that we’ve talked about for a long time now – basically since I signed my first deal with New York, this was a potential move. I just take it as it goes.

“The biggest thing for me when I think about it is remembering where I came from. Being in my house a year ago with my family, valuing those times when I have the opportunity. Now I don’t see my family for months at a time. It’s hard at times, you go through ups and downs with that. A lot of people don’t understand that it’s not just every Saturday that the work goes into. It’s the six days before that and there are good and bad days. Working through those ups and downs is the biggest challenge for sure.”