May 29 2019
Featured
Sergino Dest visited the United States for the first time in 2014. Before he would represent the USA in two youth World Cups, the Dutch-American came to New York City. The magnitude of Manhattan left its mark on the young defender.

“In Holland, everything is small. New York, it’s so busy. It’s so big, all the buildings are tall. It opened my eyes,” Dest said. “The first time in America, it looked like I was in a movie! I liked it so much.”

The Big Apple’s soaring skyscrapers spoke to Dest’s enormous ambition. The “concrete jungle where dreams are made of” resonated with a player on the books at Ajax, a club that has launched and continues to launch countless soccer dreams at the highest levels of the sport. Now a key part of a U.S. Under-20 Men’s National Team that shares his immense ambition, Dest stands ready to work to make those dreams come true at the 2019 FIFA U-20 World Cup.

I want to win the World Cup, I want to write history with the U.S.
Sergino Dest
Dest started to make some of his soccer dreams come true in fall 2017 when he represented the USA at the FIFA U-17 World Cup in India. The tournament shattered attendance records and the team’s opening match against host India came in front of over 46,000 roaring fans.

“It’s the dream of every kid. Everybody wants to play in a big stadium,” Dest said. “The tournament was an amazing experience, the biggest experience of my life so far. I’ve never played in a big stadium like that before. If you heard all the people in the stands, if you heard that sound, it just made me want to play. It gave me motivation to play well. Playing in a World Cup is the biggest thing you can do at your age group.” 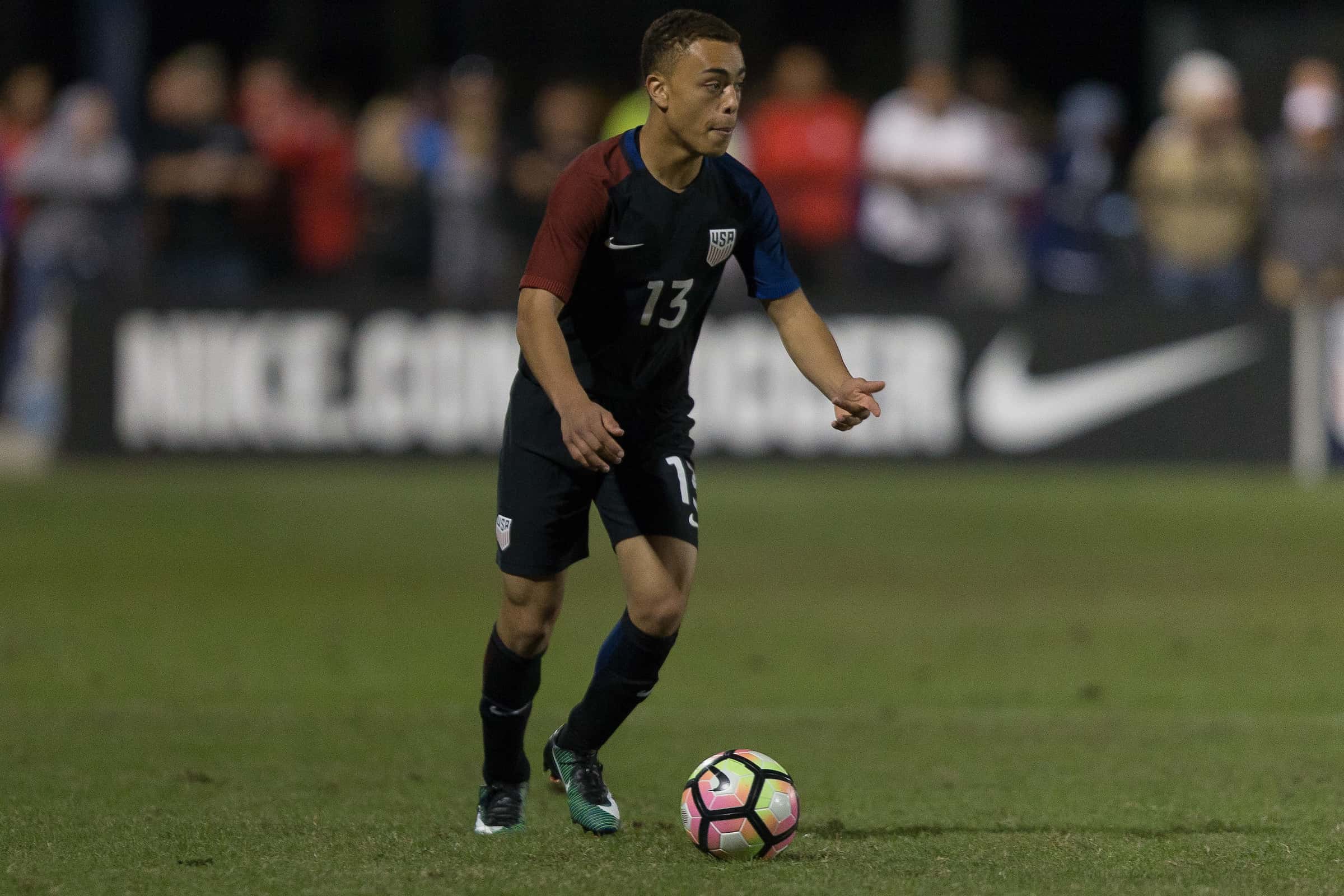 The U-17 World Cup provided Dest’s biggest stage yet as he played in four of the team’s five games in India. While the bulk of the USA roster trained together full-time at the U.S. Soccer Under-17 Residency Program in Bradenton, Fla., Dest had spent his entire life in the Netherlands.

A connection at Ajax tipped off then-U-17 MNT head coach John Hackworth to Dest’s American eligibility. Son of an American serviceman and a Dutch mother, Dest held dual citizenship with the U.S. and Netherlands. Hackworth called him into his first camp in October 2016 for a set of friendlies vs. Costa Rica in Bradenton.

“When we first looked at him, he was playing as an outside back, but had been playing as a winger,” Hackworth said. “Every time you watch Sergino play, you know right away there’s a reason he was a winger because he loves to attack and he loves to attack off the dribble. He’s an attacking player who has learned to be a really good defender. He comes from a pro environment, a club renowned for their player development pathway and a club that has visions of being one of the top teams in the world.”

While the U-17 World Cup provided the first raucous crowds for the defender to play in front of, he has started to find fuller and fuller grandstands this season at Ajax. Dest has risen through the ranks of the Dutch superpower since the U-12 level.

This season, he broke through with Jong Ajax, the club’s reserve team that plays in Holland’s second division. He scored his first professional goal last November in front of 25,000 fans at FC Twente as he logged over 1300 minutes in 17 appearances for the second team. Dest also spent time with the reserves and Ajax’s U-19 squad, where he appeared in all eight of the team’s UEFA Youth League matches.

The club has a legendary reputation for the development of young players. Based in Amsterdam, Ajax has produced a number of all-time greats, often launching them onto careers with even bigger European powerhouses. This season, its latest high-profile products – a nineteen-year-old captain and twenty-two year-old star midfielder – led the team’s exhilarating run to the UEFA Champions League semifinals.

“It’s so inspirational,” Dest said. “I was so proud of Ajax. I also want to play in the Champions League! It’s everybody’s goal and dream to play at the highest level. When I see the Ajax first team, I‘m always watching and trying to see some tricks from the players in my position so I can do that too with my own abilities and create my own style.”

To Dest, Ajax has instilled that the technical aspect of soccer stands as the most crucial part of the game. It sits at the core of his education over nearly a decade at the club.

“The technical stuff, that’s the most important in soccer,” Dest said. “Ajax is one of the biggest clubs in Europe. They’re always focusing on technical stuff, they’re not as physical as in England for example. You can always go the gym and work on your fitness and improve your speed. But it’s soccer. So, you have to be technical, you have to know how to control a ball and that’s what you learn at Ajax: to pass, to get some first touches, those kinds of things.”

That skillful quality has made Dest a consistent contributor in the U-20 MNT cycle. He started the team’s first two games at the U-20 World Cup as he has picked up 10 U-20 caps and appeared in five of nine U-20 events.

The defender joined the U-20 MNT for the second stage of November’s Concacaf U-20 Championship, where he started and went the distance in the qualification stage games against Costa Rica and Honduras as well as the final against Mexico. He helped the U.S. defense keep a clean sheet in all three victories against its most difficult opposition of the tournament.

“I don’t think I’m similar to anyone over here,” Dest said. “I have my own qualities and I want to be unique. I watch a lot of different types of players. I enjoyed watching Ronaldinho so much, that I wanted to learn all those skills. I’m a defender but still I’m using those skills.”

Dest’s technical ability makes him stand out but it fits right at home on a U-20 team that prides itself on holding possession and playing attacking soccer. While U.S. teams of yore might have developed reputations of gritty defense and opportunistic counters, Tab Ramos’ squad fits the skillful abilities of Dest and his teammates.

Unlike the USA’s other 20 players in its World Cup squad, Dest was born overseas. But the place on his birth certificate has never impacted his desire to represent the United States. From the moment Hackworth brought Dest in, the Dutch-American has stood eager to play for the Stars and Stripes. 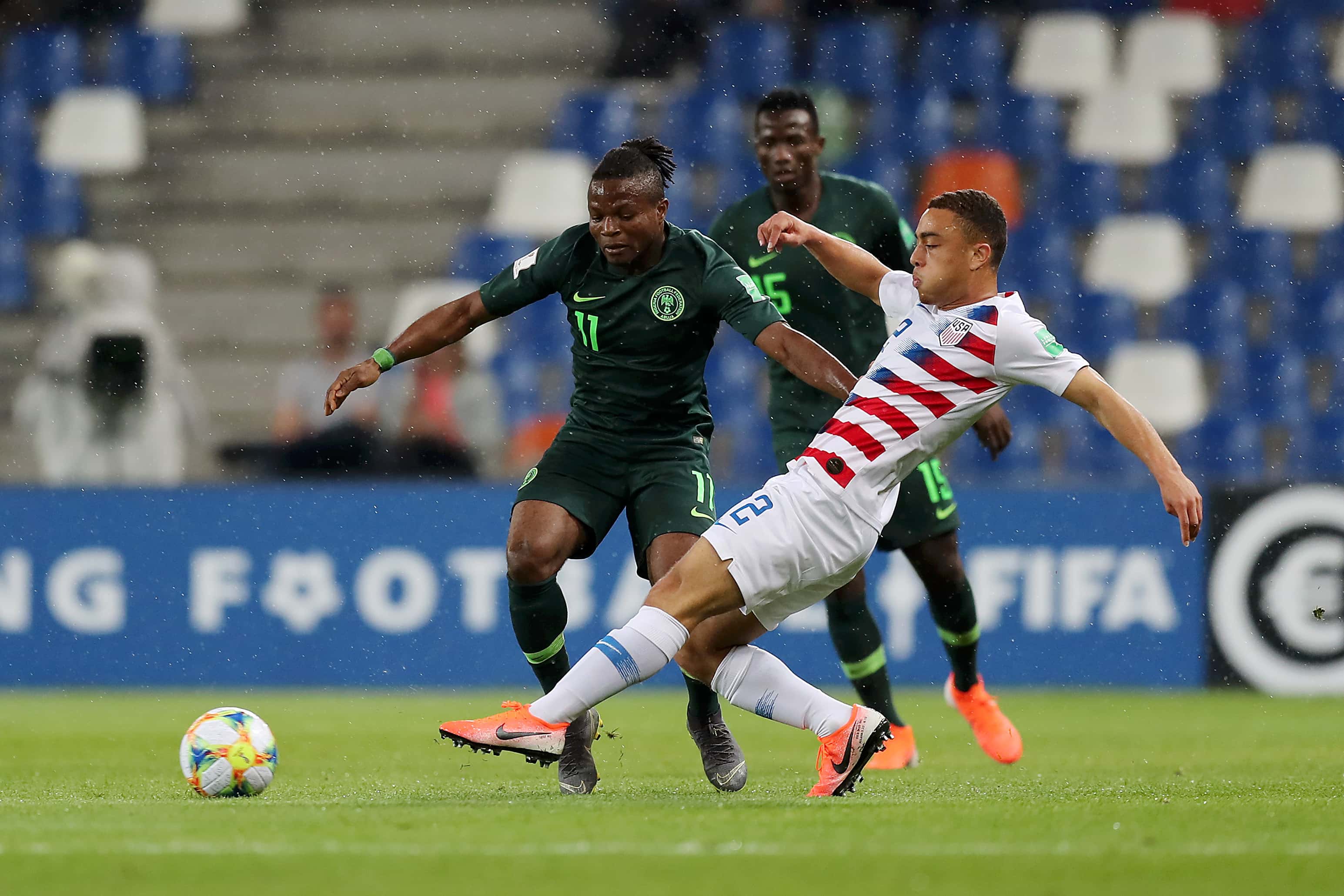 “We didn’t have to sell it to him, we didn’t have to talk him into it. He was adamant that this was the team he wanted to represent,” Hackworth said. “It wasn’t a hard process, it wasn’t a process like I’ve experienced with other players that have different choices. He said, ‘Hey coach, this is where I want to be. If you want me, I’m in. I’m here, I’m ready to go.’ It’s a great commitment from a player. He liked the team, he liked the staff. He liked the culture that was established and felt like he could be really successful in that.”


Dest’s dreams loom as large as the Manhattan skyline. While he muses of making his own Champions League run with Ajax, even more sought-after is the chance to represent the USA, his chosen country, in a senior World Cup. For now, he takes enormous pride in wearing the crest at the U-20 level and will do everything he can to push the U.S. to new heights in Poland.