In the latest edition of the Great Eight series, we take a closer look at some magic moments from the Third Round of the 2019 U.S. Open Cup, where there was a Cupset for the ages and goals tumbled out of the wet night in Oklahoma.
Jonah FontelaMay 31 2019
Open Cup

Fans of the 106-year-old Lamar Hunt U.S. Open Cup live by its magic moments. And the Third Round of the 2019 competition tossed up a good few of those on May 28 and 29. Join ussoccer.com for a look back at eight moments of note from the 11 games, in which a wise old head prevailed, goals (and rain) tumbled out of an electric sky in Oklahoma and amateurs Orange County FC did the impossible (and perhaps the pre-ordained) just off the Strip in Las Vegas.

The Promise of Ominous Beginnings

There was a dangerous sky over Norman, Oklahoma. The air weighted with threats and charged with electricity. Kick-off between Energy FC and the Tampa Bay Rowdies, an old and venerable name in American soccer, was delayed. Then delayed again. And once more for good measure. Strike after strike of lightning streaked the sky. Two separate tornado warnings were issued. Just shy of two and a half hours passed before fans, huddled in cars under improvised shelters, crawled back to the damp stands. And, as if an apology for the wait, the game gave all of itself over to those who remained. We had five goals in the first 30 minutes. Three lead changes. Two men were stretchered off in the first half alone. There was no defense. And hardly any midfield. Just goals, goals and more goals. They tumbled out of the wet night. The hometown Energy put five past the Rowdies, who haven’t conceded that many in 12 USL Championship games this year, and won the day 5-4 just seconds shy of midnight local time.

After a long weather delay, @EnergyFC & @TampaBayRowdies served up a thriller of a Third-Round opener with the Oklahomans winning the day 4-3 & moving on to a date with an @MLS side in the Fourth Round.

Jimmy Nielsen is an Open Cup icon. We remember his pink keeper jerseys, his black tights and shock-blond hair. We remember him lifting trophies and braving sub-arctic doomsday Finals with Sporting KC in 2012 and 2013. But things are different now. It’s not all glories and trophies these days. The Dane’s on a hard road with the USL Championship’s worst team. He pleaded with his Hartford Athletic players before their Open Cup Third Rounder in Tennessee. “We need to go out and show who we are against Memphis 901 because our loss to them earlier this year was the worst of them all,” said Nielsen, a two-time MLS All-Star and once Goalkeeper of the Year – a winner by any measure. “We can show them who we really are now.” Despite the manager’s battle cries and pleas to redemption, Athletic were toothless in a 4-0 loss. Now all they have is pride to play for – dead last in the USL Championship with one win from 12 games. 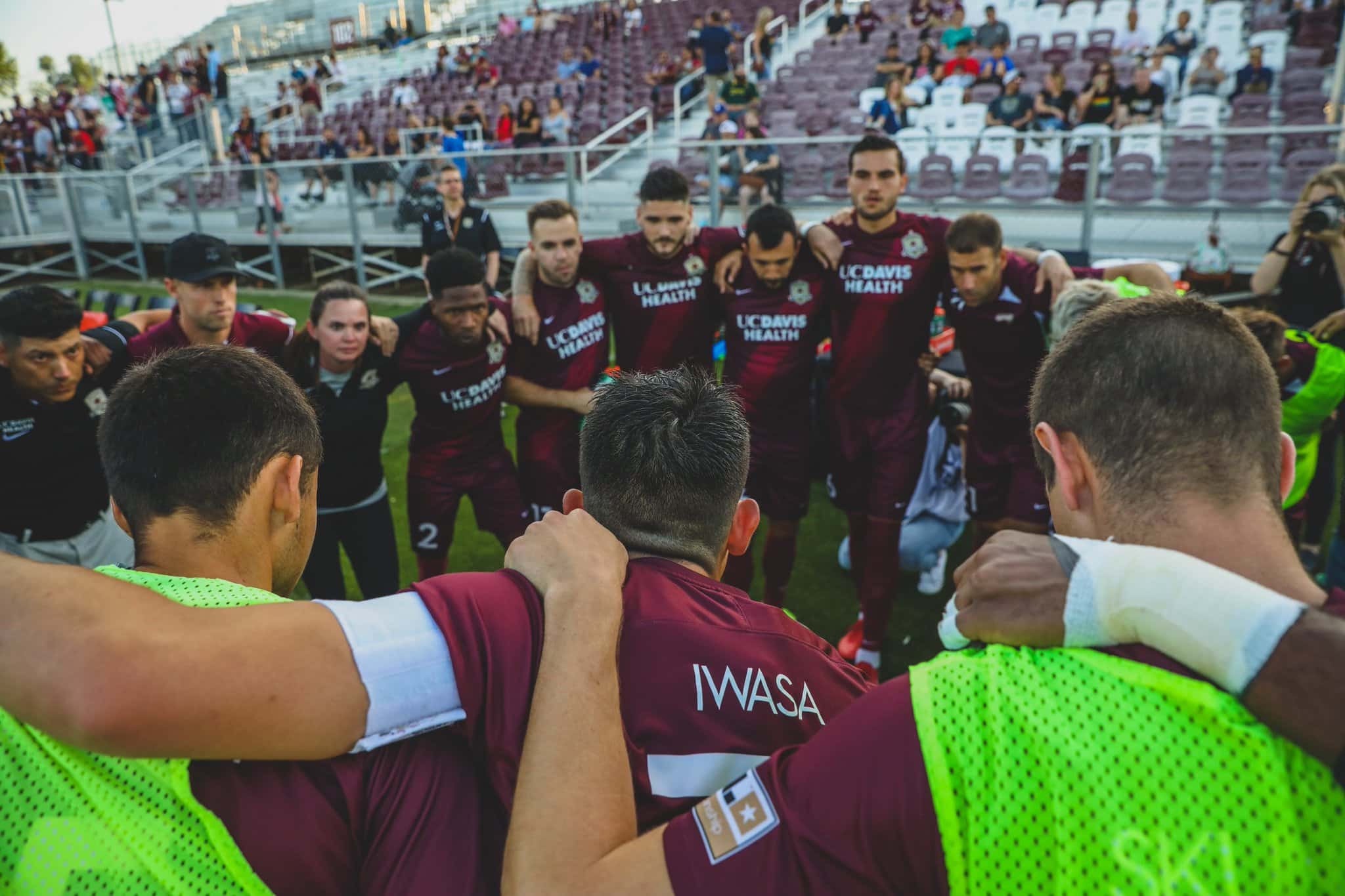 The Battery & a Wise Old Head

The Charleston Battery are the oldest continually operating soccer club in America, though Richmond’s Kickers will argue it. They’re legends in the Open Cup too. Their name makes the big boys shiver a little. In 2008, the Battery beat FC Dallas, Houston Dynamo and the Seattle Sounders to reach the Final. They pressed D.C. United that championship day too, losing out 2-1 in the end. It was the last charge to a Final for a squad from outside Major League Soccer. Charleston didn’t look like much in their edgy shootout on the road in Nashville in the 2019 Third Round, but that won’t bother Mike Anhaeuser. He was in charge back in 2008 and has been with the club since it was founded, first as a player and for the last 20 years as head coach. He knows better than anyone, it doesn’t matter how it looks in the Cup. How it’s better to grow into the competition than to flare hot and fast and early. He sits, rounder and thinned of hair, on that bench. He waits for an opening. Anhaeuser watches like a predator, looking for a weakness. “It’s harder now,” he told ussoccer.com, a glint in his eye ahead of a clash with MLS giants Atlanta United in the Fourth Round. “But it can still be done.”

The Open Cup often draws comparisons to the NCAA Basketball Tournament. It’s played every year, check. It’s a one-and-done format, check. Underdogs rise up consistently, check. Every game needs a winner, check. There are a million and one reasons why they’re not similar, but the excitement on offer, the way the two tournaments urge us to dream big and weird, are common to both. “Those runs where you knock a few big names off are the essence of the Open Cup,” said the 2011 USOC top-scorer Dave Bulow. “You’re probably not going to win, but it matters, just like March Madness.” And this time out, in the 2019 Third Round, we had a bona fide buzzer beater. Sacramento Republic and Fresno FC had played two hours and more of scared soccer. They both feared the knockout blow. It was tangled up at zeros and headed, without doubt, for penalties. That was until Stefano Paolo Bonomo stood up. A SacTown local, soft-spoken and likable, he put his header of deceptive power tumbling into the goal. It was, literally, the last action of the game and the ref didn’t even bother to re-start in the center circle. It was over. All that was missing was Bonomo climbing up and cutting down the net. 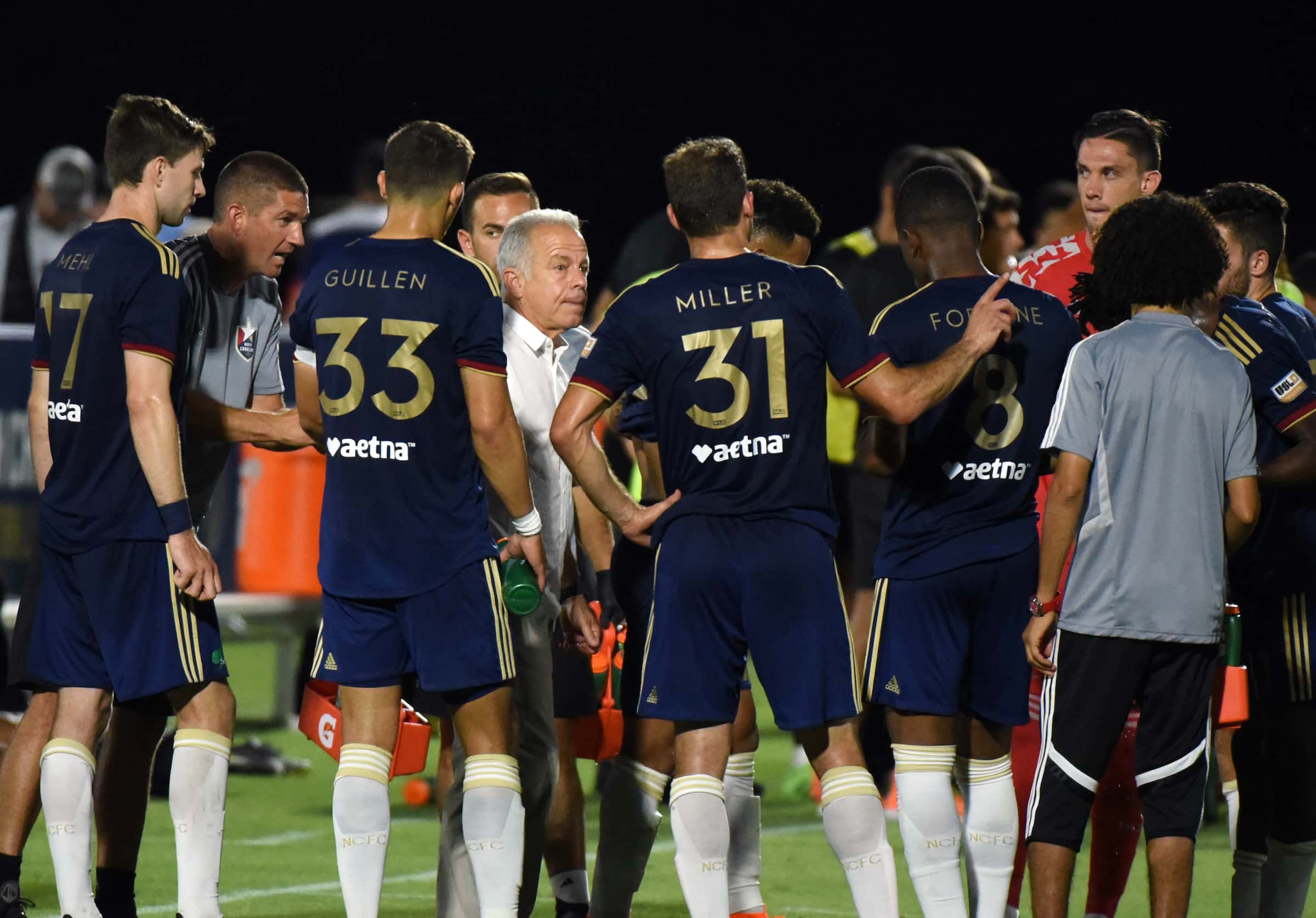 Wise old head, Dave Sarachan, and his NCFC saw off the Soccer Soldiers

Florida’s Soccer Soldiers helped us dream in 2019. A team of Sunday-leaguers, amateurs all, they humbled pros Miami FC and Charlotte Independence. They did it with style too. But they met the wrong foe in the Third Round. North Carolina FC boss Dave Sarachan has won Open Cups and seen it all. His team did what pros do to beat amateurs. They sat back as the Soldiers charged hard. They let Valentin Sabella, hero of the previous rounds, punch himself out. The best Soldiers were sucking wind inside 30 minutes. Sarachan and his NCFC happily played the role of the bigger boy on the schoolyard, not ruled by emotion or lured by quick glories. They held the Soldiers by the forehead and waited while they swung. Predictably, the young bulls faded. NCFC took their chance, won 1-0 and moved on. By the end, the Soccer Soldiers – wearing the neon green of a construction crew – were out of gas and out of ideas. A late red card for the outstanding Daniel Meneses signaled the end of the their charge. Romance be damned.

The Cupset – It is Written

But there is romance. There are dreams worth dreaming. Little David can win. He’s got a rock and an arm and there are soft spots in the giant’s armor. There’s one every year. An amateur team that finds something they didn’t know was there. They scale walls. Their goalkeepers grow to fill the whole of the goal. Their strikers find holes where they aren’t. Last year it was NTX Rayados, before that Christos FC of Baltimore in 2017. Before that someone else and all the way back as far as you want to look at the 106-year-old Open Cup. This year, we have Orange County FC. Their smiles are ancient. Their heroics, biblical. Their run to the Fourth Round, and a date with LA Galaxy, is as thrilling and joyful as it is pre-ordained.

What Happens in Vegas

There was something in the air in North Vegas. In that old ballpark near the Strip. Eric Wynalda, coach of the all-pro Las Vegas Lights, on one side. Paul Caligiuri, his old roommate with the U.S. National Team, was on the other, in charge of the amateur Orange County FC. The first goal, from Cody Shelton, started the whispers. Upset. Cupset. Whatever you’ll call the miracle. Then another fell. It was a tragi-comic own-goal that went cruelly past Angel Alvarez, the 21-year-old Lights goalkeeper who attended high school a few blocks from Cashman Field where OCFC were holding our dreams in their hands. If they were nervous about tripping up, it didn’t show. If they worried about crushing them, they didn’t let on. The Lights, a man down, clawed back. They tied it near the end. But it was already over and they didn’t know it. The sling was spinning, making a whistle in the air, and the stone had been flung. Blake Frischknecht looks awkward, but he’s a killer. He’s a King, like old David was. He turned up at the back post unnoticed – no small feat for a young man well over six feet and built like an ox. He volleyed home. 3-2 with only moments remaining! And cue the celebrations, the thick romantic scribbles. And another! This one from Oscar Flores who tiptoed with the ball into the Lights goal, and the giant was down. Goliath wasn’t getting up. The OCFC players hardly knew where to turn in celebration. Their fists in the air and their wide smiles seemed to ask a question in a long-gone language. Goliath who? 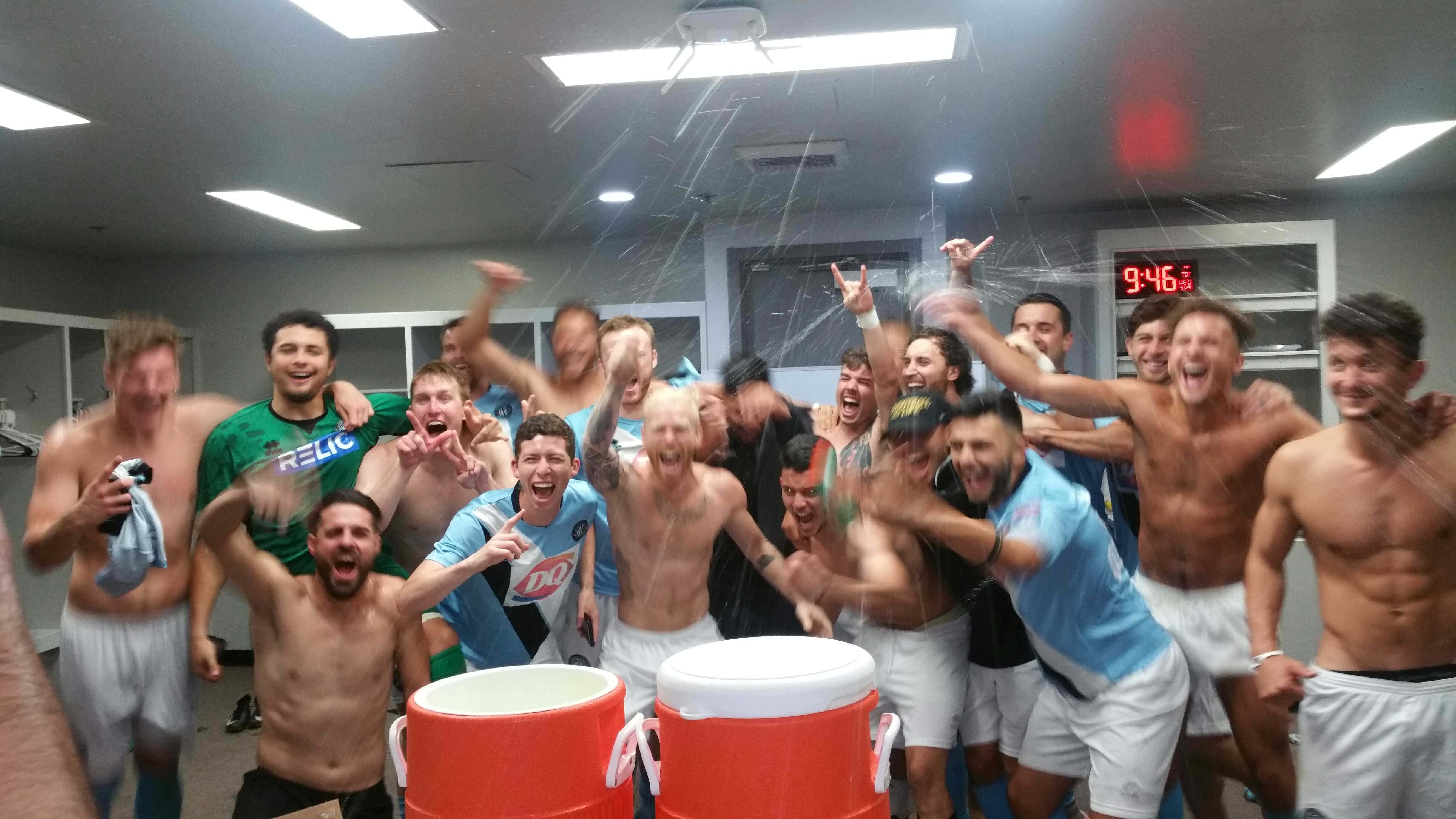 In among the upsets and the dreams, we’d be wrong not to spare a thought for those clubs who took their leave. With every rise, a fall – this is the Open Cup after all. There’s no winner without a loser. No draws here. Nothing to share. Those Florida Soccer Soldiers, how they showed their stuff. And boy, was it good. They did it with class too – a final message to the Cup and their hosts on a losing night – ‘Thank You NCFC, Florida Soccer Soldiers!” The words were scrawled across a dry-erase board in the away locker-room in red block letters. Forward Madison, the League One men from Wisconsin, you were never less than #FullMingo. You brought the tournament color, wit, and some fantastic soccer. Thank you for it. And we’d be wrong not to say one last goodbye, or farewell, or see-you-soon, to a special friend. Eric Wynalda – you old wizard of the Open Cup, you evangelist for all its charms and second chances – you were on the wrong side of it this time. And we know it wasn’t the first time. But isn’t it what the Cup is all about?