Forward Alex Morgan, who was one of the three finalists for The Best FIFA Women’s Player, finished second (42 pts) in the voting, only four points behind Rapinoe (46 pts), while England defender Lucy Bronze finished third (29 pts).

In addition, U.S. players made up almost half of the first FIFA FIFPro Women’s World11 with Rapinoe, Morgan, midfielders Julie Ertz and Rose Lavelle and defender Kelley O’Hara being honored.

Rapinoe and Ellis received the awards today at the 2019 The Best FIFA Football Award Ceremony in Milan, Italy, and the FIFA FIFPro Women’s World11 was also revealed as the world’s governing body for soccer held its annual event. Lionel Messi of Barcelona and Argentina was named The Best FIFA Men’s Player for a record sixth time, and Liverpool’s Jurgen Klopp was named The Best Men’s Coach of the Year.

This year marks the sixth time an American woman has been named FIFA Women’s World Player of the Year following Carli Lloyd’s selection in 2015 and 2016, Abby Wambach in 2012 and Mia Hamm in 2001 and 2002, which were the first two years the award was presented.

Rapinoe, 34, made her USWNT debut in 2006 but broke through in 2010-2011, famously lofting the pass to Abby Wambach for her iconic goal against Brazil in the quarterfinal of the 2011 FIFA Women’s World Cup, and has gone on to play 158 times for the USA. She scored her 50th career international goal in the 2019 FIFA Women’s World Cup Final.

Rapinoe has scored nine goals with four assists in 2019, six of those scores and three of the assists coming during the Women’s World Cup, where she won the Golden Ball as the tournament’s best player and the Golden Boot as the top scorer.

Rapinoe scored in four of the six matches she played at the World Cup and had the game-winning assist against Sweden in the final group game. She famously scored back-to-back braces in the Round of 16 win against Spain and the epic Quarterfinal triumph against France, both of which ended 2-1 in favor of the USA.

She coolly converted a 61st minute penalty against the Netherlands in the World Cup Final to put the USA ahead for good on the way to its fourth Women’s World Cup title. 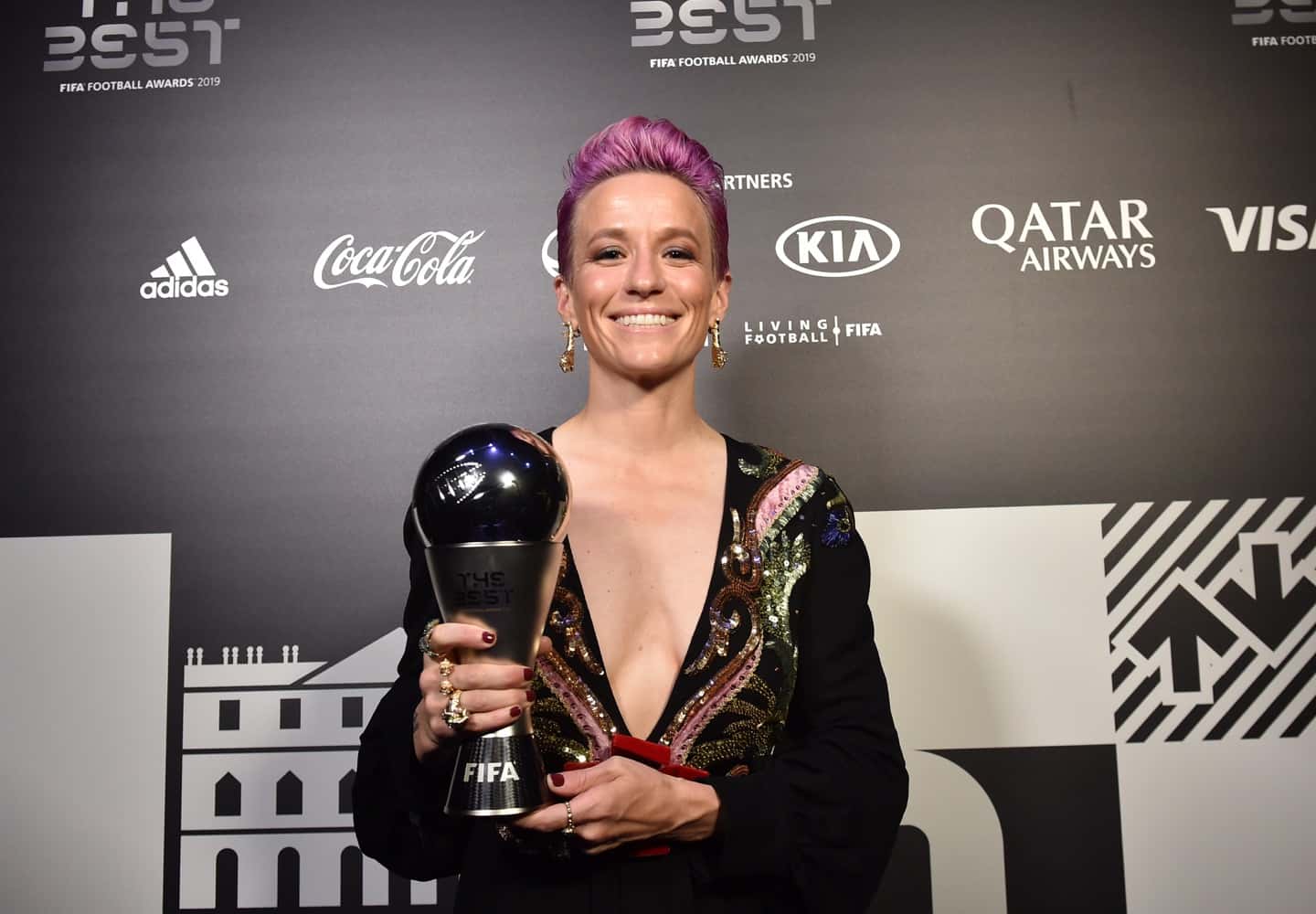 Ellis is the second coach of a U.S. team to win the FIFA Women’s Coach of the Year award, which was instituted in 2010, but the first American and the first U.S. coach to win it twice. She is only the second coach to win the award multiple times after Silvia Neid of Germany, who has won it three times. Swede Pia Sundhage won the award in 2012 after leading the USA to the Olympic gold medal in London.

Ellis, who announced on July 30 that she was stepping down from her post as U.S. Women’s National Team head coach, has led the USA to a 15-1-2 record so far in 2019, losing only the first match of the year against France in Le Havre. Since then, the USA is unbeaten in 17 consecutive games, including the run of seven victories at the 2019 Women’s World Cup, the final five of which came against some of the best teams in Europe on European soil.

At the World Cup, Ellis and her staff deftly managed the U.S. to first place in Group F, resting many players in the second match against Chile before starting the run of victories over European opponents, taking down pre-tournament favorites France and England in the Quarterfinal and Semifinal, respectively, then defeating reigning European champion Netherlands, 2-0, in the title game.

Fifty-five players were named as finalists for the FIFA FIFPro Women’s World11, including 14 Americans. Ertz, Lavelle and O’Hara each started all six matches in which they played at the Women’s World Cup and all played crucial roles in the USA’s success in France.

Ertz, 27, was a force in the middle of the field and scored her first World Cup goal in the USA’s second group match against Chile. Lavelle, 24, won the Silver Ball as the second-best player in tournament, scored three times and famously clinched the World Cup Final with a brilliant dribbling run and finish up the middle of the Netherlands defense to make the score 2-0, which is how it ended. O’Hara, 31, who was a forward during her entire youth and college career but switched to outside back for the USA in 2008, was a key part of a U.S. defensive line that allowed just three goals in the tournament.

This is the fourth time a FIFA FIFPro Women’s World11 has been named, but first time that the team was honored on stage at the awards ceremony.

The 2019 FIFA Women’s Coach of the Year, the 2019 FIFA Women’s World Player of the Year, the USA’s FIFA FIFPRo World11 players and their teammates all return to the field Oct. 3 in Charlotte, N.C. and Oct. 6 in Chicago when the USA takes on Korea Republic [Tickets]. The match in Chicago will mark the final game for Ellis as U.S. head coach. She has amassed an overall record of 105-7-18 during her tenure as head coach and is on the cusp of breaking the U.S. record for all-time wins, which she could accomplish in Charlotte on Oct. 3.