After representing the USA at the U-17 and U-20 FIFA World Cups, Ajax defender Sergiño Dest confirms that he will continue with the U.S. Men's National Team
October 28 2019
Featured

The U.S. Men’s National Team received a boost on Monday as Sergiño Dest revealed that he will continue to represent the United States in international competition.

The first opportunity for Dest to officially be cap-tied will come when the USMNT faces Canada in a must-win Concacaf Nations League group stage match on Nov. 15 at Exploria Stadium in Orlando.

“I am happy to announce that I have decided to keep playing for the U.S. Men's National Team,” Dest said. “Of course, it was a tough decision for me when the Dutch Men's National Team showed their interest, but I have built up a very good feeling with Team USA over the last couple of years and I strongly believe in the plans and potential of U.S. Soccer. I am therefore dedicated to making the next 10-15 years a big success and will do my utmost to help the team play for titles.” 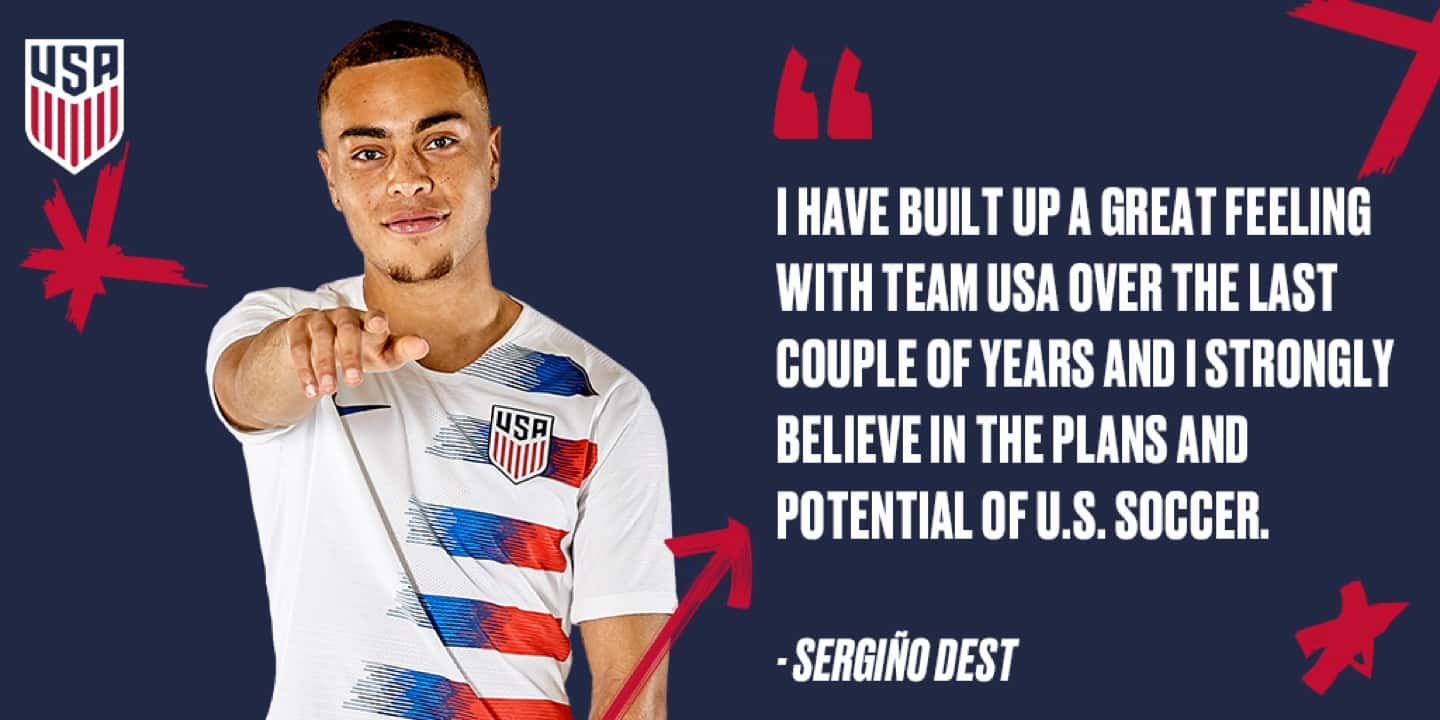 Born in the Netherlands to a Dutch mother and Surinamese-American father, Dest represented the United States at the 2017 FIFA U-17 World Cup and 2019 FIFA U-20 World Cup, then earned his first two appearances for the USMNT in September.

Since those senior appearances came in friendly matches, the 18-year-old remained eligible to represent the Netherlands, who recently showed interest in the Ajax full back.

With Dest haven taken the October international window off to think about his future, USMNT head coach Gregg Berhalter and Sporting Director Earnie Stewart went to Amsterdam last week, meeting with the player and his father the day after Ajax’s UEFA Champions League encounter against USMNT teammate Christian Pulisic and Chelsea.

We are thrilled to have Sergiño commit to our program. He is an exceptional young player with a bright future. Our youth national teams gave him the platform to showcase his talents on the world stage and now he will continue his progress with us at the senior level.
Gregg Berhalter, USMNT head coach

Including Dest, 69 players with dual eligibility and 11 sons of American servicemen have represented the United States since 2008. His story is strikingly similar to that of Stewart, who was born in the Netherlands to a Dutch mother and American serviceman and spent most of his life living in Holland.

“We are excited that Sergiño will continue with our program,” Stewart said. “In all of our discussions, Sergiño expressed the comfort he feels within the group and his appreciation for the commitment the Federation has made along the way. As a dual national myself, I understand the choices that these young players face. Our job is to provide a clear pathway and maintain honest and open communication, and then ultimately it comes down to a personal decision.”

Off the back of his performance at the 2019 FIFA U-20 World Cup, Dest has impressively locked down the starting right back spot for the Dutch giants this season. Dest has appared in 15 matches across all competitions, including the midweek Champions League encounter with Chelsea as well as Sunday’s 4-0 win against rivals Feyenoord, contributing an assist in Die Klassieker.

The youngster has also shown his versatility, with both his USMNT appearances coming at left back.

Dest is expected to be part of the USMNT squad for next month’s must-win Concacaf Nations League matches against Canada on Nov. 15 in Orlando (TICKETS) and Cuba on Nov. 19 in George Town, Cayman Islands. With the matches coming in official competition, an appearance in either game would officially tie the defender permanently to the USA.