The first overall pick in the 2007 MLS SuperDraft, midfielder Maurice Edu used his Rookie of the Year campaign for Toronto FC to propel himself on to the USMNT stage, starting in back-to-back 1-0 away victories against Switzerland and South Africa that fall.

Driven by those first two caps, Edu was summoned by Bob Bradley to the 2008 January Camp, with the goal of using the extended audition to firmly establish his place in the player pool. 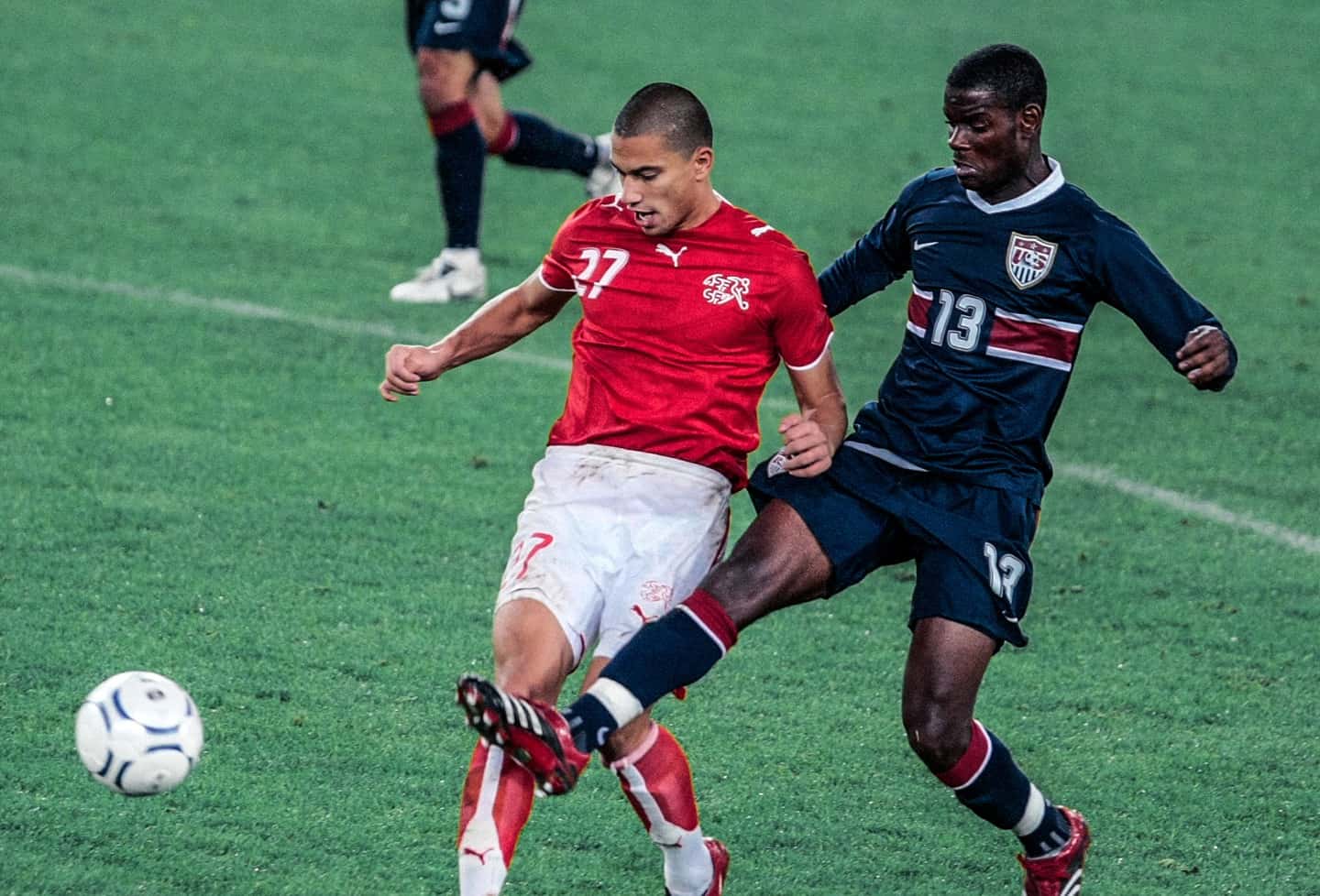 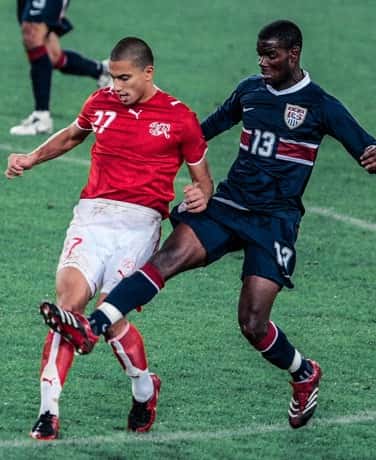 “January Camp was my first chance to really be in front of the coaches on a daily basis,” Edu told ussoccer.com. “As a young player sometimes going into camp can be very difficult. You only have a few days leading up to the game to catch the eye of the coaches to justify them bringing you in and to earn playing time. For some players it can take a few days, maybe a week to feel comfortable and be able to express themselves and show the quality they have.”

“When you’re under the guidance of the coaches for three or four weeks, you have that time to come out of that shell on and off the pitch as well. Coaches are also looking at your personality and seeing how you fit in the group, what you bring to the locker room – those things that you don’t feel all that comfortable expressing until you get familiar with the guys around you.”

Just 21 at the time and age-eligible for the 2008 Summer Olympics, Edu joined the likes of Michael Bradley, Benny Feilhaber, and Jozy Altidore in the block of players who were working their way into the USMNT while also making up the core of the U-23 side that would look to qualify for Beijing.

“In my mind, the next big tournament coming up was the Olympics. That was huge and I definitely wanted to be on that team. I had ambitions to go to Europe, and I knew playing an international tournament could open the door to more opportunities. I wanted to use it to show my quality on and off the field. I knew going to Olympic camp that I wanted to assert my leadership there too. I wanted to make sure the coaches knew that I was one of the guys that could be vocal within the group, be a leader on and off the pitch.” 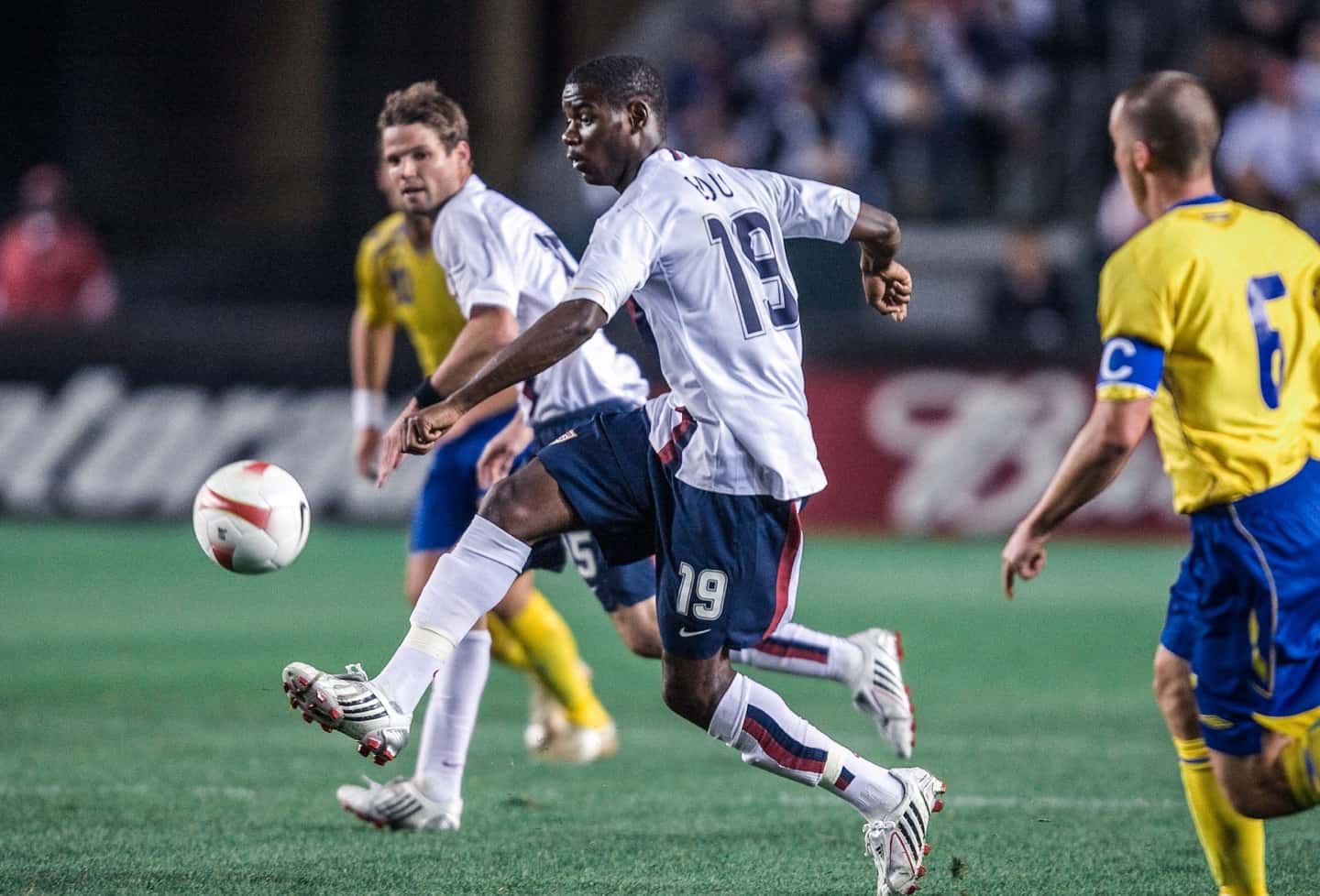 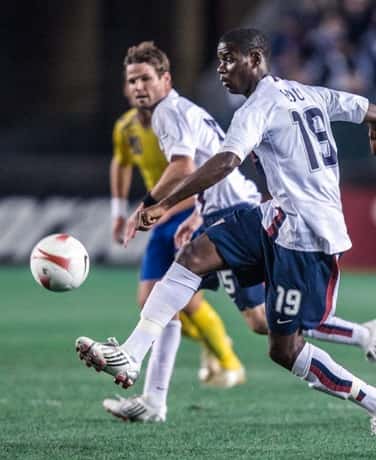 After going through the long January Camp grind, Edu played the full 90 minutes in a 2-0 win against Sweden at the end of month and came off the bench in a 2-2 draw with Mexico that February – performances that laid the path for the rest of the year.

“My goals for that camp came good,” he said. “I captained the U-23 team through qualifying and I was one of the captains when we went to Beijing. It was important for me. It played a big role for me climbing the ranks of the National Team, but it also helped me establish my spot with the Olympic team.” 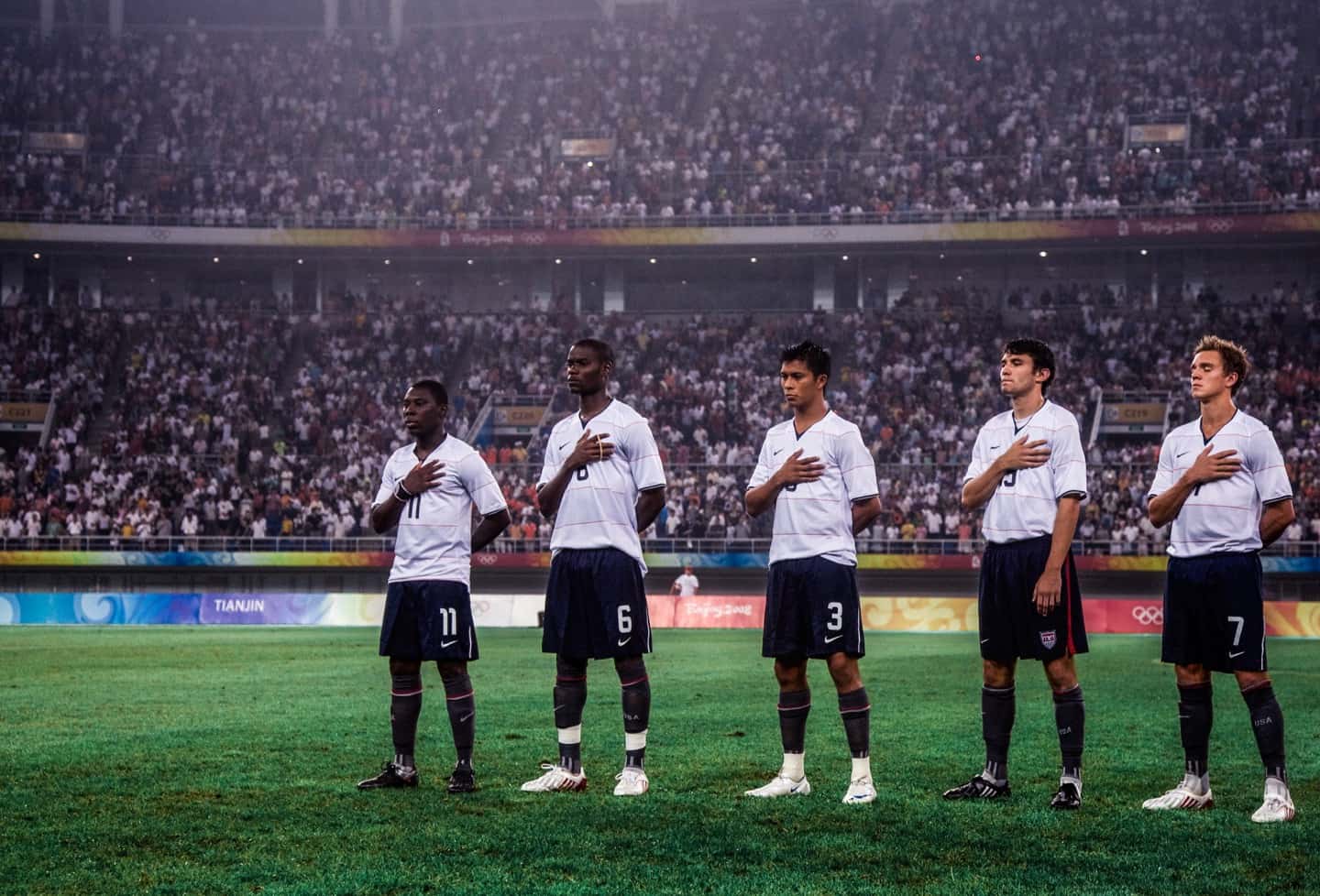 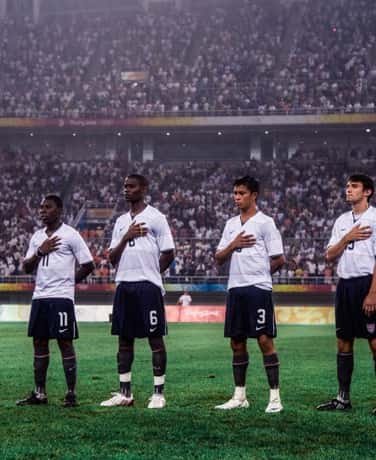 Maurice Edu during the National Anthem prior to the U.S. U-23 MNT’s 2-2 draw with Netherlands during the 2008 Summer Olympics in Beijing

His dream of going to Europe also came. Shortly after the Beijing games, Edu transferred from Toronto FC to Scottish Premier League giants Rangers and went on to appear in three of the USMNT’s six semifinal round World Cup qualifiers that year.

Though a knee injury sidelined him for much of 2009, Edu returned to the USMNT the following year and made the 2010 FIFA World Cup roster, appearing in three of four matches in South Africa. There, he unfortunately saw what should have been a late, game-winning goal against Slovenia erroneously called back.

In part, Edu credits his quick ascent on the USMNT scene and his European move to the extended look he received in that January Camp. Particularly, he hopes his experience as an Olympic-eligible player is instructive for the 14 players in the current camp who are age-eligible and vying for a spot at Concacaf Olympic Qualifying Championship in March. 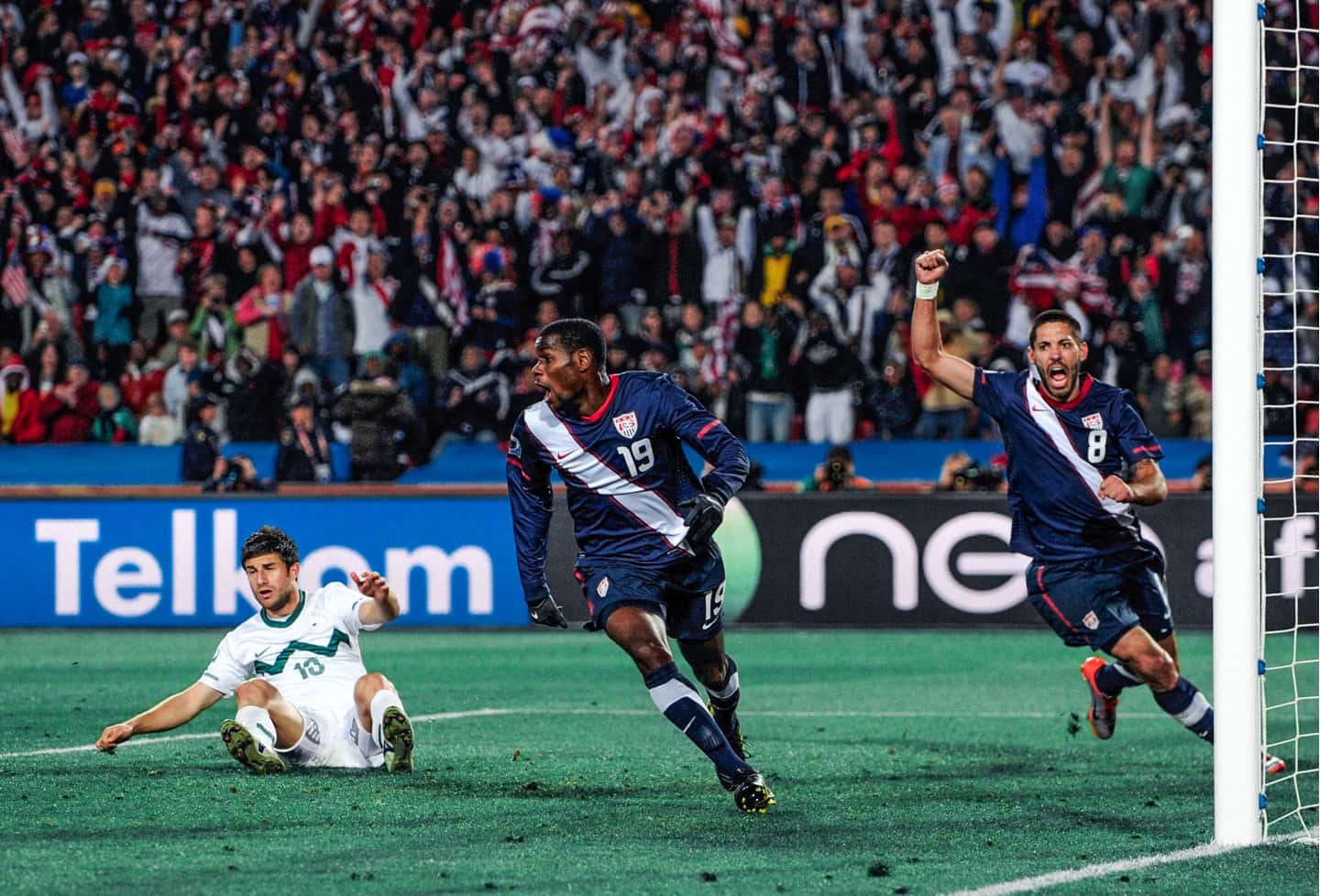 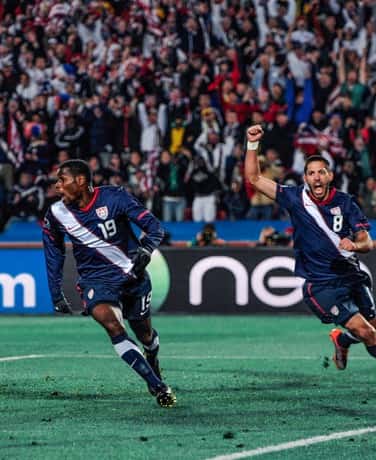 “For the young guys that get this opportunity early, maybe this is the springboard to solidify your place with the senior team. For others, maybe this is a chance to show that you can be a player with the team, but it’s a little way down the road and your chance is with the Olympic team.

“In the end, make the most of that experience. Stake your claim. It’s not a guarantee that this is going to happen next year. You can look at names of players throughout the years who didn’t come back. That’s just what happens; that’s how the game evolves. Some players get better, some fall off, some take that next step, and some don’t. You want to be that guy who is continually progressing, going forward and raising their stock. You want to be a part of this team for the long haul.”