Though accomplished in 1930, the historic feat wasn’t recognized by FIFA until 2006
Michael LewisJuly 17 2020
Featured

Bert Patenaude always had this innate knack of scoring goals in bunches.

A brace here, a hat-trick there, a pair of goals within a handful minutes to turn a game on its head. They were back-breakers for the opposing side and a pain in the back for goalkeepers who constantly had to take the ball out of the goal.

As impressive as those feats were, Patenaude's biggest achievement occurred some 5,300 miles away a year prior in a fledgling international competition in Montevideo, Uruguay.

Only 20-years-old, Patenaude became the first player to record a hat-trick in a World Cup in 1930, although it took some 76 years to have that achievement recognized by FIFA.

During a nine-year career, his skill, speed, shot accuracy and soccer IQ made Patenaude one of the most lethal goal-scorers of the decade.

Superlatives flowed in almost as quickly as his goals.

The St. Louis Star and Times described Patenaude as "brilliant," while the New York Daily News called him a "superb opportunist."

The Brooklyn Times Union dubbed Patenaude as the best center forward in the American Soccer League. 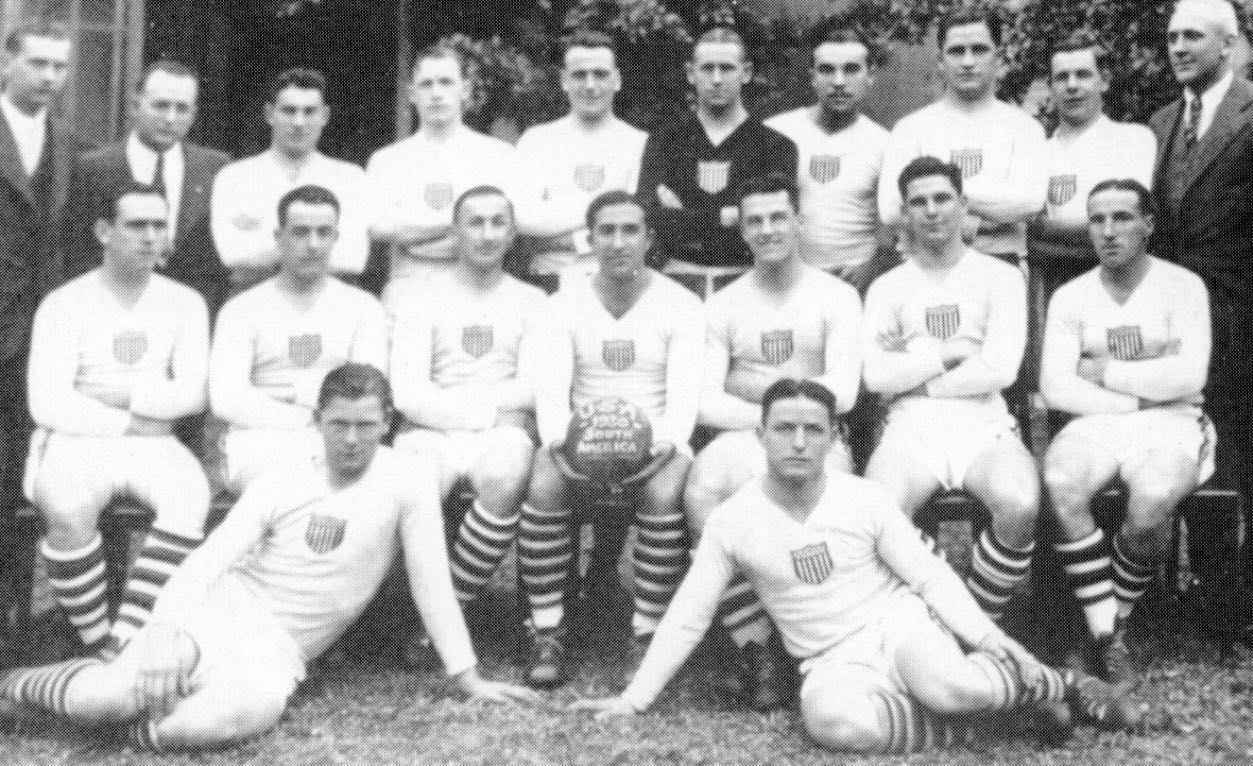 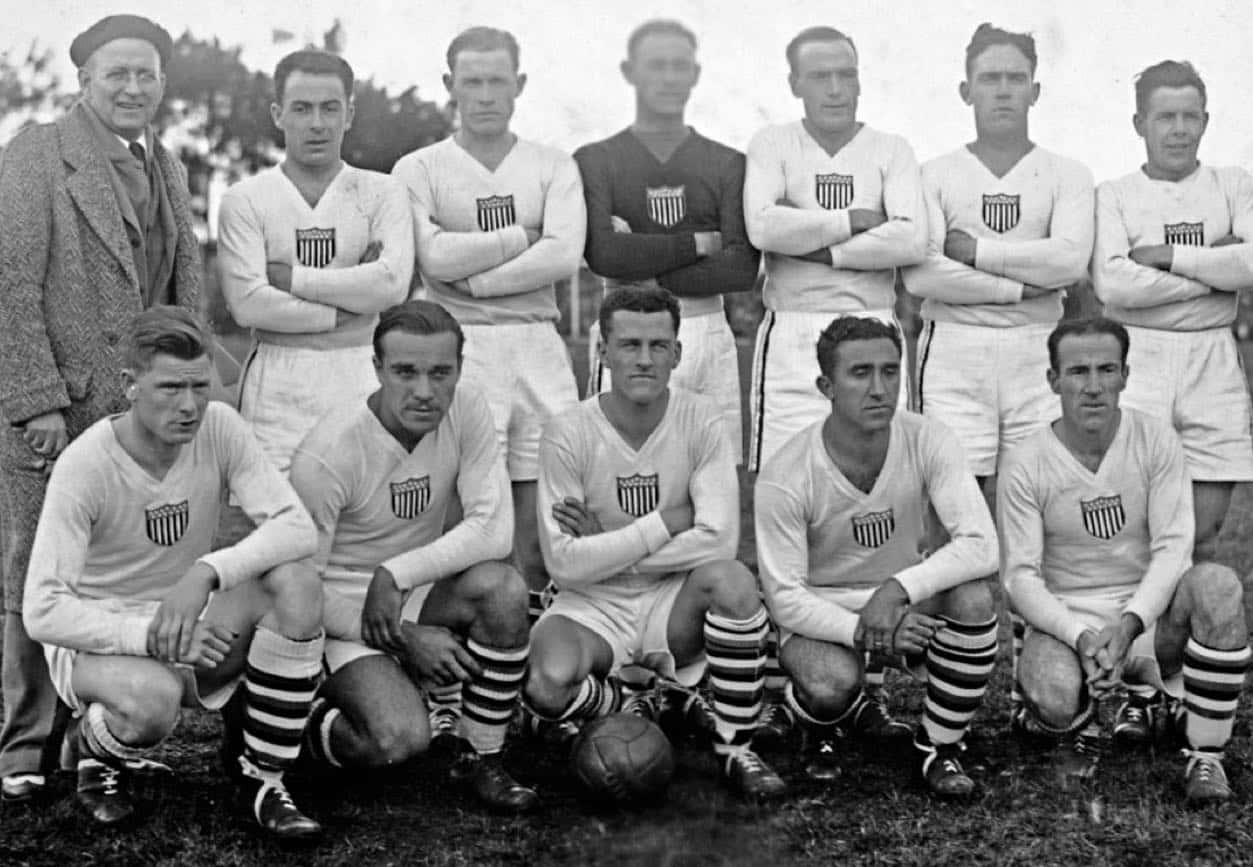 The 1930 U.S. World Cup squad. Patenaude is pictured in the middle row, third from right.

"Patenaude is dangerous before the goal because he has the knack that has made Archie Stark great for years," the newspaper said in its Nov. 14, 1930 editions. "He can hook the ball into the net before it touches the ground. It provides an element of surprises against the defense and furnished the Fall River man with more speed and power to his boot when he connects."

The rest of the world learned at the inaugural World Cup.

Patenaude was one of 16 players selected to the team. Stark, one of the country's greatest forwards during the 1920s, declined to attend because he had an opportunity to play on a European tour, citing that the team had a very good goal-scorer in his place. "Patenaude was a good center forward," he was quoted in Tony Cirino's book, U.S. Soccer vs. the World. “But the World Cup wasn’t a big thing in those days. A trip to Europe was better than a trip to South America.”

Remember, the 1930 FIFA World Cup was the inaugural edition. It had no reputation and it wasn't until decades later that the tournament would take its place as the planet’s most prestigious team competition.

Due to the long distances and related costs to travel, only 13 teams agreed to participate in the world championship, which marked the 100th anniversary of the formation of the nation of Uruguay. After earning gold medals at the 1924 and 1928 Olympics, the Uruguayans were regarded as the best soccer team in the world.

On June 13, the U.S. squad embarked on an 18-day steamship journey to reach its destination before taking on the best in the world (the team didn’t return home until Sept 2, with an added stop in Brazil).

With only 13 teams – many European sides did not compete, citing costs and the long trip - three groups of three teams each and one with four were created. The Americans’ were draw into a group which included Belgium and Paraguay.

Not much was expected of the USA, which had rather mediocre performances at the two previous Olympics. When the Americans met Belgium at Parque Central Stadium on July 13, the field was "a bed of wet, sticky clay with pools of water too numerous to count," U.S. manager Wilfred Cummings wrote in his official report.

After a slow start, the U.S. dominated the European side, as Bart McGhee tallied the first American World Cup goal in the 23rd minute before Patenaude intercepted a clearance and fed Tom Florie, who doubled the lead just before the halftime whistle. Patenaude netted his first cup goal in what could have been one of his easiest score. Arnold Badjou came out of his net to challenge James Brown, who lofted the ball over the goalkeeper's head to Patenaude. The center forward then scored into an empty net in the 69th minute for the final word of a 3-0 victory. 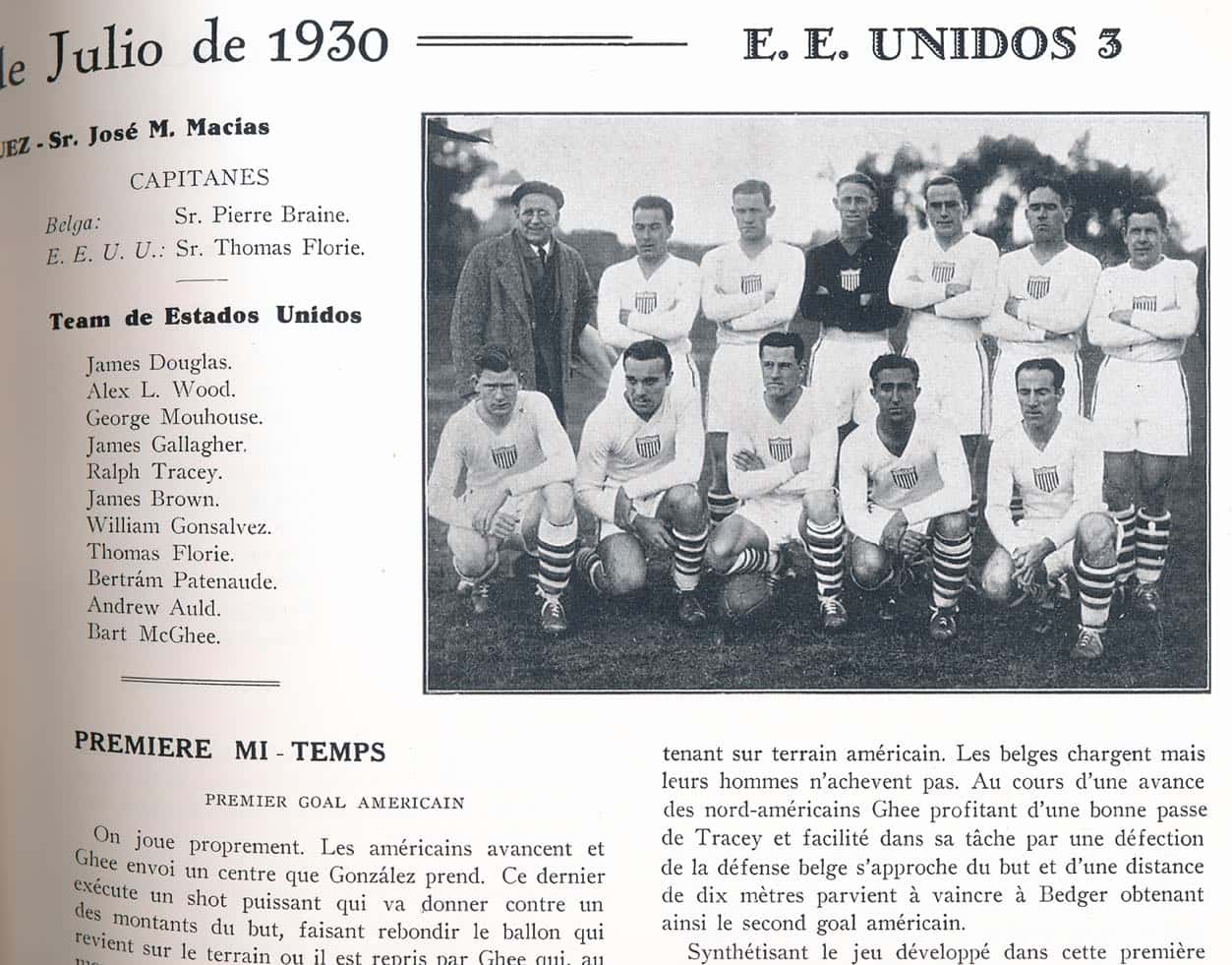 Official recap from the USA-Belgium Match played June 13, 1930 in Montevideo

Given the proximity and quality of the next opponent, Paraguay, runners-up to Argentina in the 1929 South American Championship (renamed Copa America in 1975), the USA was considered distinct underdogs in the July 17 confrontation. Despite those so-called obstacles, not only did the Americans prevail, they won going away behind a performance for the ages by Patenaude.

Back on the Parque Central pitch, Patenaude converted a cross from Andy Auld past goalkeeper Modesto Denis. With the USA controlling the pace, the forward struck again only five minutes later, latching onto a long pass from Raphael Tracey for a two-goal advantage. Patenaude finished off his memorable match in the 50th minute. After a left-wing run, Auld crossed the ball for Patenaude, who slotted it home for a 3-0 margin and the final score.

Well, not exactly, at least not at that time. The Americans thought it was, but according to FIFA reports at the time, the second goal was scored by Florie, although there were also reports it was an own goal. In days long before instant replay or VAR, it was a brace and not a hat-trick.

Not to everyone, according to Dave Litterer, a U.S. soccer historian. He noted that the game report in the Argentina daily La Prensa published diagrams of how the goals were scored. The Brazilian paper O Estadio do Sao Paulo recorded that Patenaude scored three goals.

For decades, Argentinian Guillermo Stabile was credited as being the first player to connect for a World Cup hat-trick, in a 6-3 win against Mexico two days later on July 19, 1930. 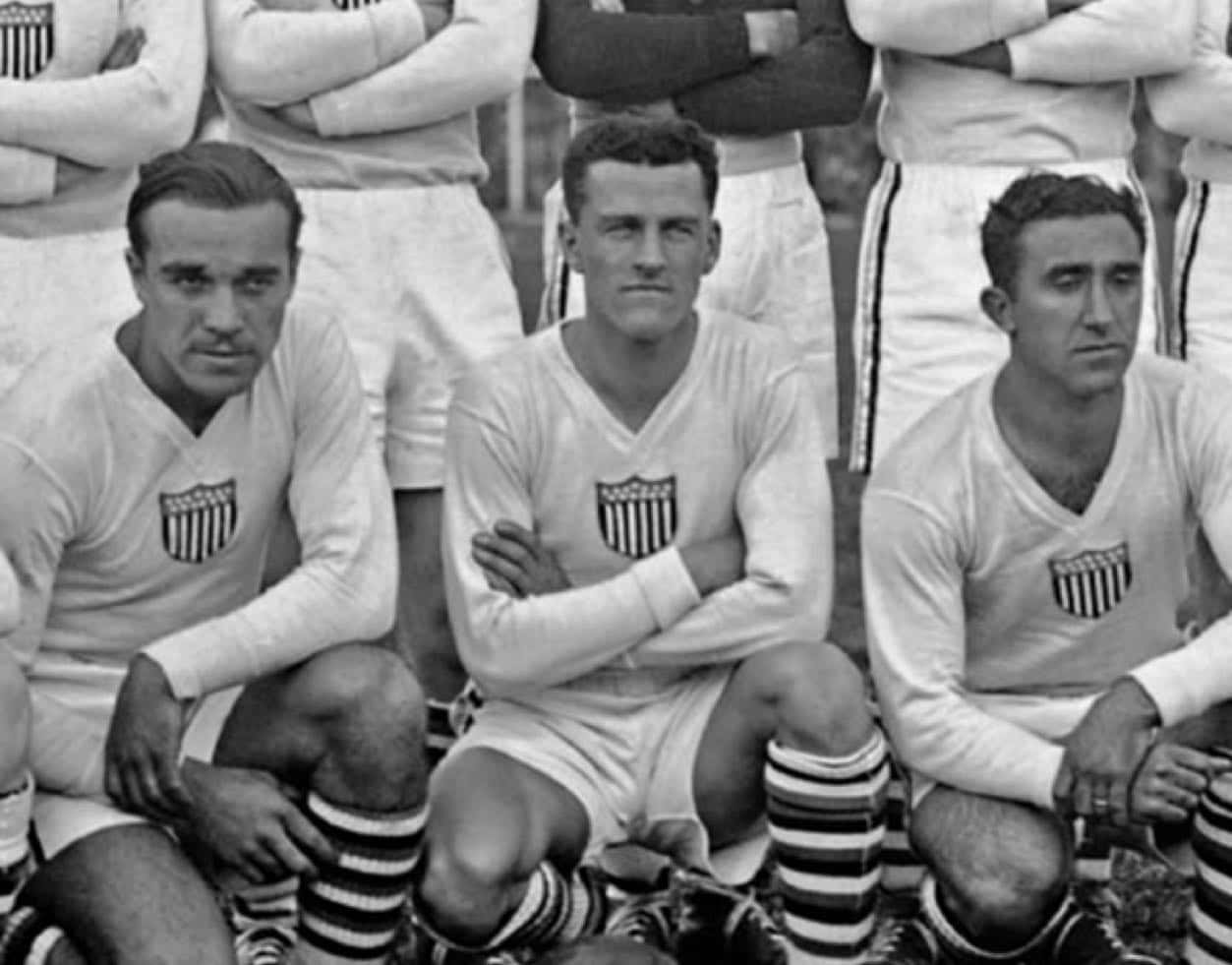 That is, until former U.S. Soccer historian Colin Jose interceded. Through his research Jose helped to convince FIFA to change the record books. Jose had spoken to Arnie Oliver, a teammate of Patenaude, at a National Soccer Hall of Fame ceremony in the late eighties.

“Later at the Hall, I also saw a recorded interview of Oliver along with Jim Brown, who played in 1930, and they were also talking about Patenaude’s three goals,” Jose was quoted by The Guardian in 2015. “I didn’t give it another thought until [sometime after chatting with Oliver] I found the official report on 1930 by the U.S. manager, Wilfred Cummings, who recorded that Patenaude hit the net three times against Paraguay. I began to wonder how I might find out if this was correct.”

On Nov. 10, 2006 -- 76 years later after the hat-trick -- FIFA gave Patenaude proper credit for his milestone accomplishment.

In the 1930 World Cup semifinals, the USA had their collective heads handed to them in against Argentina, 6-1. Patenaude, who was taken to the hospital with a stomach injury, did not find the net in the brutal and physical encounter, but finished the World Cup with four goals, good for third in the competition, behind a pair of legends - Stabile (eight goals) and Uruguayan Pedro Cea (five). He also was named to the FIFA World Cup all-star team (Uruguay captured the first World Cup title, outdueling archrival Argentina in a contentious final, 4-2).

Patenaude's four goals still stand as the most scored by a U.S. men's player at a single World Cup and he was the lone all-time American goal-scoring leader until Landon Donovan reached five career goals during the 2010 edition.

On the team's journey back home, the Americans played some friendlies in Brazil, including one against the national side in Rio de Janeiro. Patenaude converted a brace in a 4-3 loss. That gave him six goals in four internationals, an amazing strike rate, although he never performed again for the USA. 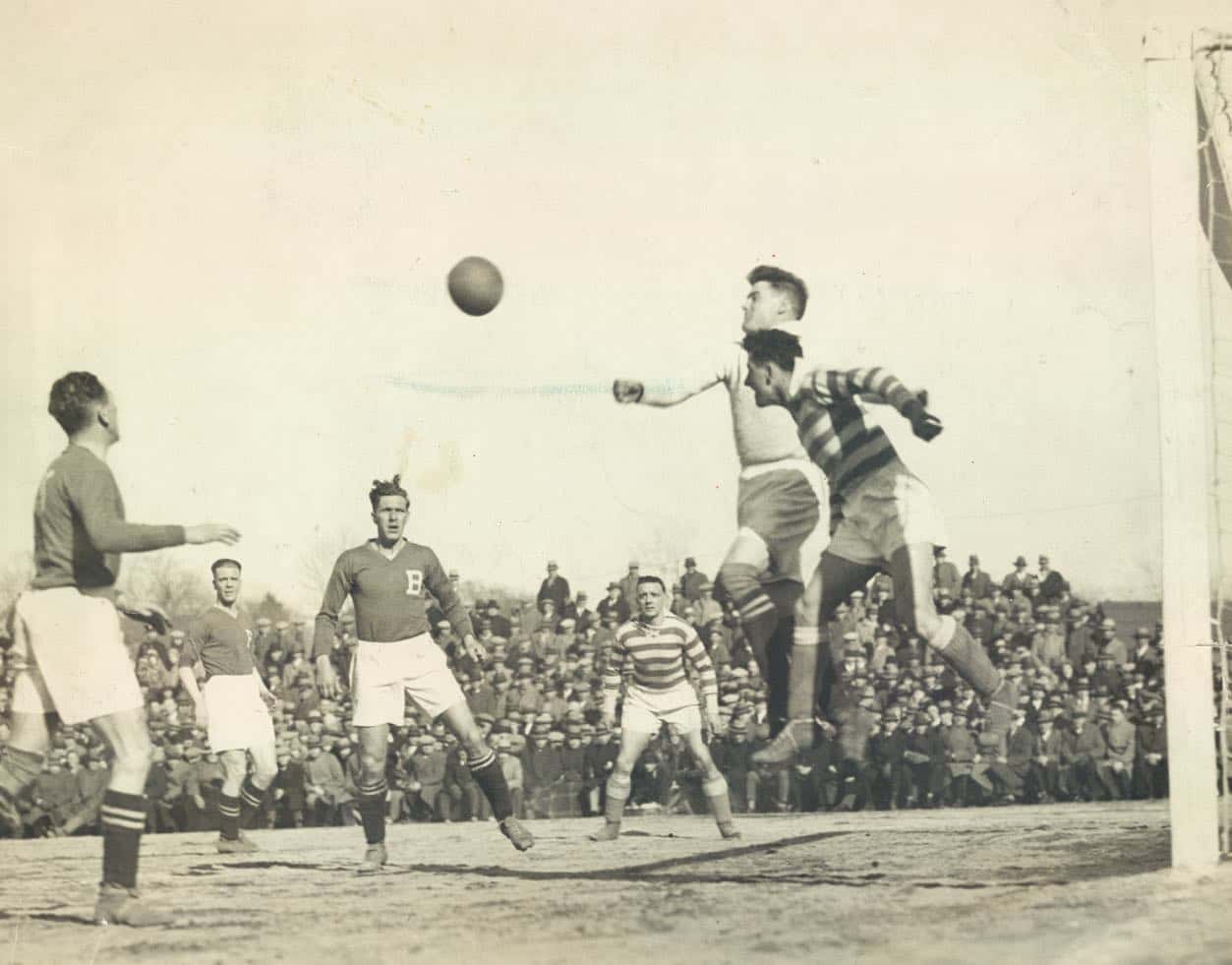 And oh yes, about those five-goal bonanzas that came several months apart at the Polo Grounds in New York City in 1931.

On Sunday April 5, Patenaude became the first player to score for five goals in a National Challenge Cup game (now the Lamar Hunt U.S. Open Cup), for the New York Yankees in their 6-2 triumph over the Chicago Bricklayers in the first leg of the final in front of 12,000 fans. With the Boston Globe noting that the center forward was "slippery as an eel," Patenaude had a hat-trick by halftime before adding two in the second half.

On a muddy pitch on Sunday, Dec. 13, Patenaude had a hand, or a foot, in all six New York Giants' goal in a 6-1 triumph over the Pawtucket Rangers before several thousand drenched fans who witnessed a virtuoso performance. Patenaude celebrated five goals and set up the sixth in the ASL encounter. It took Patenaude and his teammates about a half hour before they warmed up and fill the net while making "fine use of his dazzling speed," the Daily News reported.

Incredibly, he also duplicated the feat for the Philadelphia German-American in a cup game against a Philadelphia foe in 1933 and tallied four scores in a 15-minute span for Stix, Baer and Fuller in an Open Cup affair in 1934. 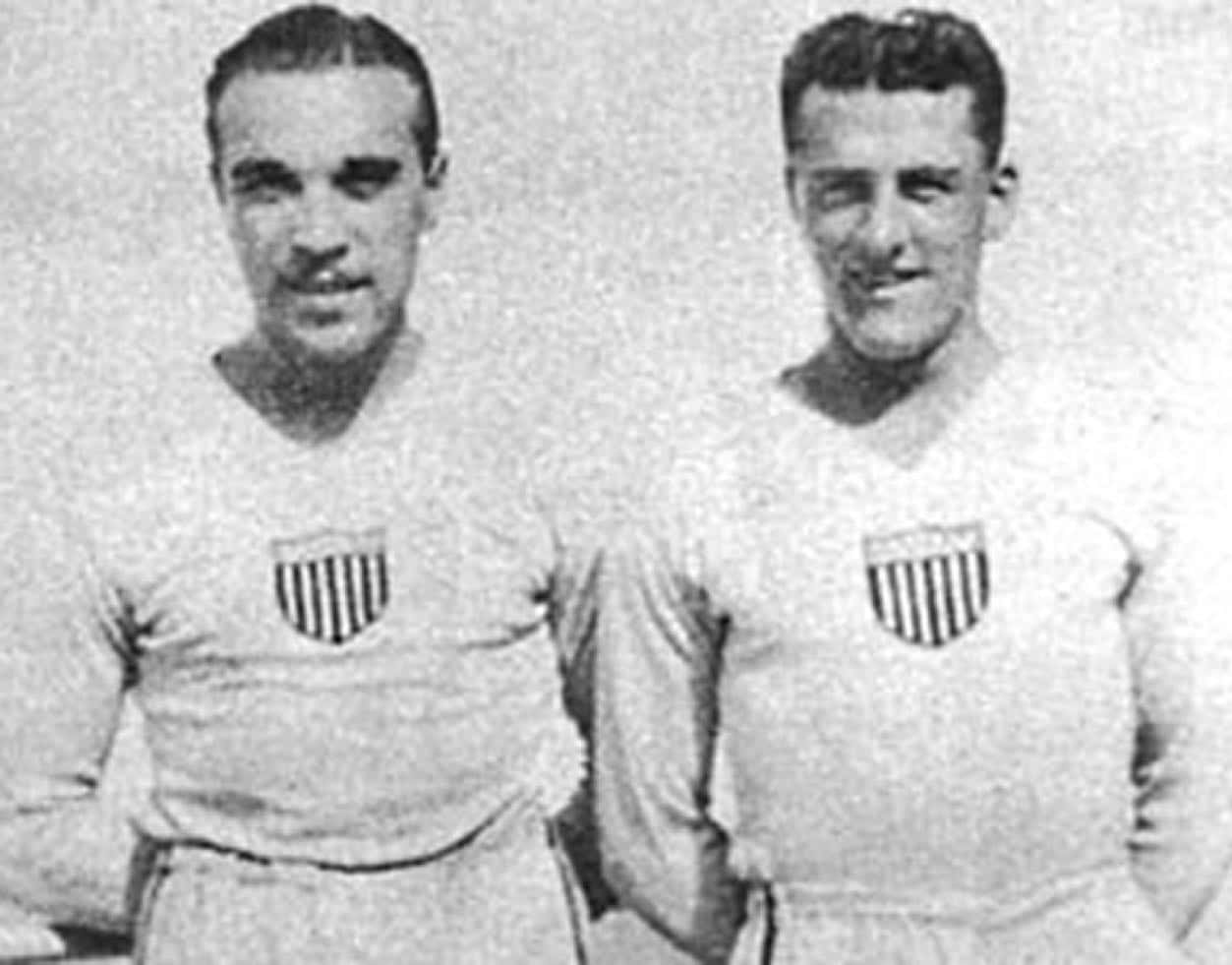 Patenaude played for several clubs during his career from 1928-36. Born in the soccer hotbed of Fall River, Mass. on Nov. 4, 1909, he honed his craft locally leagues before joining the Philadelphia Field Club in 1928. He also performed for J&P Coats, Fall River Marksmen (who eventually merged with the New York Soccer Club to become the Yankees, teaming with the fabulous Billy Gonsalves, aka the Babe Ruth of soccer, for several years to form a virtually unstoppable one-two attacking punch, Newark Americans, New York Giants, Kearny Irish-Americans, Philadelphia German-American, St. Louis Central Breweries and Philadelphia Passion.

Not surprisingly, Patenaude played a key role in three ASL championship teams with Fall River and as many National Challenge Cup (now the Open Cup) winners with the Marksmen and Central Breweries.

While scoring records were incomplete during that era, Patenaude was credited with 170 goals in 174 appearances, another incredible strike rate, although he undoubtedly scored many goals that were not counted or lost to history.

Despite being at the top of his game domestically, Patenaude was not chosen for the U.S. national squad for the 1934 World Cup in Italy. He had been suspended by his club, the Kearny Irish-Americans, for conduct unbecoming of a player; he reported late for at least two games and reportedly wanted higher compensation.

"Bert Patenaude, who was regarded as the coming soccer center forward of this country not so long ago, seems to be getting in wrong," wrote George M. Collins in the Globe. Collins, the U.S. Men’s National Team manager at the 1924 Olympics and former third vice president of the U.S. Football Association. "With that jaunt to Rome ahead of him, it seems that Patenaude picked the wrong time to make his noise."

Patenaude was inducted into the National Soccer Hall of Fame in 1971.

After retiring, Patenaude was a painter and carpenter in Fall River until he passed away exactly 65 years to the day he was born on Nov. 4, 1974.

Little doubt that Bert Patenaude turned out to be a born goal-scorer.