Passion can be the difference between a job and something you enjoy doing for a living.

That pleasure is fueled by a desire to excel, improve and even have some fun.

Marcelo Balboa was fortunate. Early on, his father Luis instilled that passion in him. Soccer was more than just a game: it was a way of life, and to succeed at it at the highest levels you needed passion besides just having talent.

"When you see a ball rolling, you look and you see who's kicking that ball," he said recently. “If you see a pick-up game, you think to yourself, 'Do I have shoes in my car so I can go and maybe join a pick-up game?' So, I'll die living and breathing soccer and I wouldn't change it for the world. Even if you don't make millions of dollars like other people do, it's about the smile, it's about the heart. The heart is so happy when it’s out on the field.”

As U.S. Soccer celebrates Hispanic Heritage month, it is quite appropriate we profile Balboa's career. Balboa, who is of Argentinean heritage, is a three-time FIFA World Cup veteran (1990, 1994 and 1998), the first U.S. National Team player - man or woman - to reach 100 international appearances, a National Soccer Hall of Fame inductee, and an original member of Major League Soccer with the Colorado Rapids in 1996.

Passion doesn't happen overnight. It is built over years and experiences. Thanks to Luis, who played professionally in Argentina and made at least one appearance on his country's B team, his children gained respect for the sport.

"Dad would come home from a graveyard shift,” Balboa told Jordan Angeli and Charlie Davies on a recent episode of The U.S. Soccer Podcast. “We'd come home from school. We'd get our homework done. He wouldn't sleep much because dad was taking us outside to play soccer. That's the passion he had."

Growing up in the seventies and eighties, Marcelo was an all-around athlete.

"I played every other sport possible," he said. "I played football, baseball, but nothing, nothing, gave me the joy and the smile of wanting to go out every day. I didn’t want to go play baseball every day. I didn't want to play football every day. I wanted to go play soccer and my dad just fueled the fire. They said if you water your own grass, you can make it as green as you want. My dad watered that grass pretty green and made sure that we knew what we wanted, how to do it, when to do it, and the work ethic."

Many sons and daughters want to emulate their fathers and mothers. Balboa was no exception, watching his father play in a Sunday semi-pro league and eventually performing on the same field, taking on adults as a 16-year-old.

"It was one of those things that you saw what your dad did, and my role model was always my dad," he said. "I love what my dad does. Is there an opportunity to make a living out of doing this?"

Balboa's passion also was fueled without a ball, through his imagination.

"My dad bought an old-time radio and we were listening to River Plate on a little radio," Balboa said. "I don't know how we got a satellite or a signal."

Luis Balboa eventually purchased a 10-by-10 feet satellite dish for his backyard so his family could watch international soccer.

"Soccer is in my blood," Marcelo said. "It's in my mom's blood and it naturally came through to us." 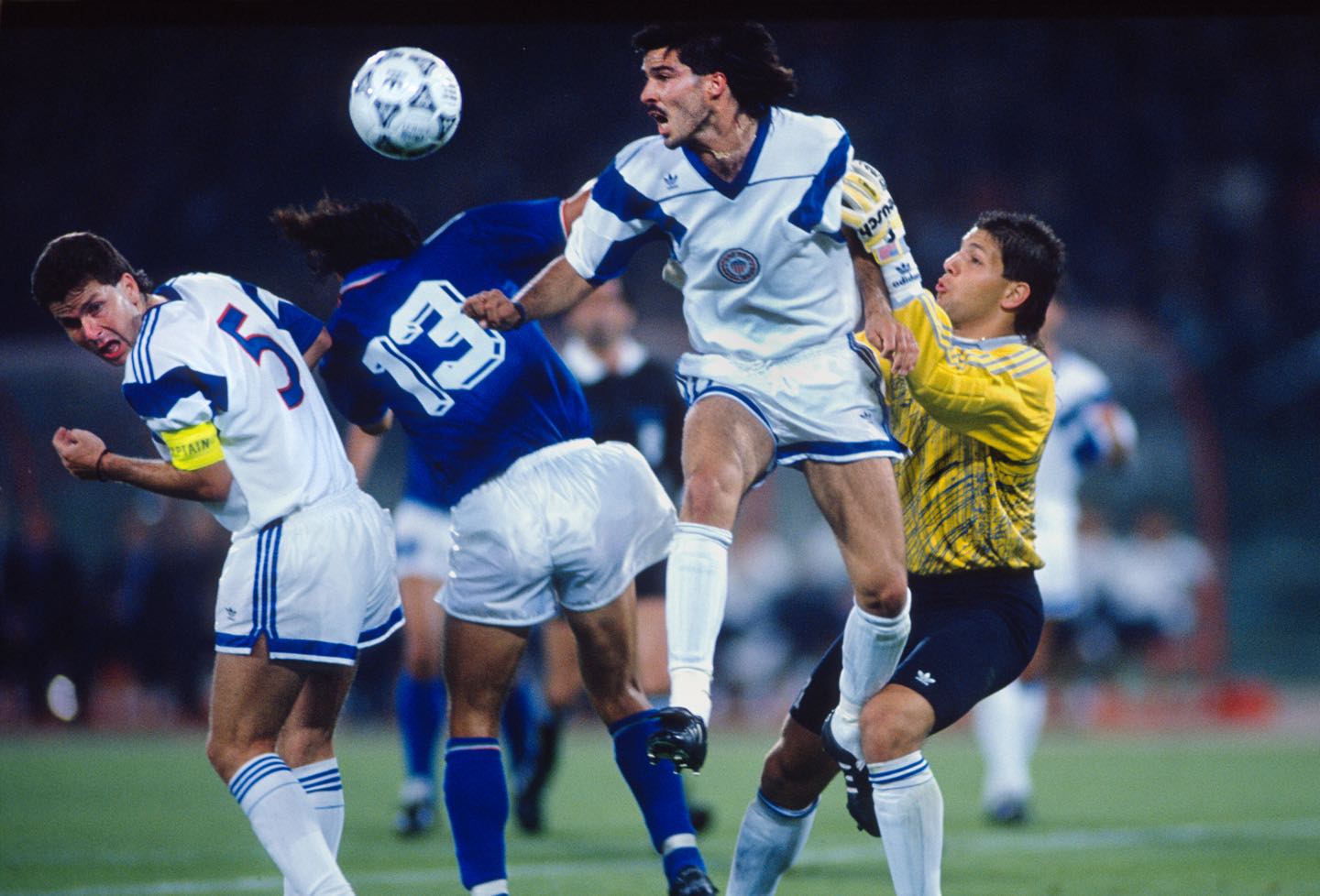 Marcelo Balboa against Italy at the 1990 FIFA World Cup

Luis, who also coached his children, never told them that he played with one-time USMNT coach Bob Gansler on the Chicago Mustangs (North American Soccer League) in the sixties. Marcelo learned about it when Gansler selected the 1990 U.S. World Cup squad.

"He went on to tell me this whole story and it kind of got me because he said that when I played, I reminded him of my dad," he said. "He saw just different little parts of my game that reminded him of how he used to play. I thought it was kind of cool. As a kid, my goal always was to be better than my dad. My dad played for Argentina. I wanted to play for my country. I wanted to outplay my dad.”

Though the USMNT qualified for its first FIFA World Cup in 40 years, it was three games and out for the team at Italia '90. It hurt Balboa not to accrue any points, but he realized a life-long ambition.

"I love what I do," he said. "I wouldn't trade it for the world. We made $18,000 in the '90 World Cup. If they would have said to us, 'You're playing but we can't pay you,' I would have gladly paid them whatever I had to represent my country in a World Cup. As an eight- or nine-year-old, you dream about playing in a World Cup. When though we got our rears handed to us by Czechoslovakia, that wasn't the point. The point was something you have in your heart.”

The Power of Friendship

On April 17, 1993, Balboa's dream of competing in a World Cup in the USA in front of friends and family was almost derailed when he tore his ACL during a 1-1 draw with Iceland at Orange Coast College in Costa Mesa, Calif.

"You just hear the loudest pop in the world," he said. "It's the worst feeling you'll ever have in your life because you think your career is over. You think you're done."

During the podcast Balboa started to choke up just a bit. "Man, I get emotional," he said. "I got lucky."

Lucky in the form of veteran teammate Fernando Clavijo, "who mentally put me back in the place I should be" as the center back endured one of the darkest moments of his career.

"He's like, ‘I'm not going to the World Cup without you.' Little by little, I got out of this funk, which you don't realize how mentally strong you have to be to get through something like that. You need people like that because if I didn't have Fernando, I'm not sure I would have made it back. I'm not sure I would have had that drive because you need somebody to fuel that fire."

That passion was reignited.

Part of the USMNT’s residency roster in Mission Viejo, Balboa worked out on his own and rode a bicycle while the team trained every day. When he had time afterwards, Clavijo (below) would ride with him. 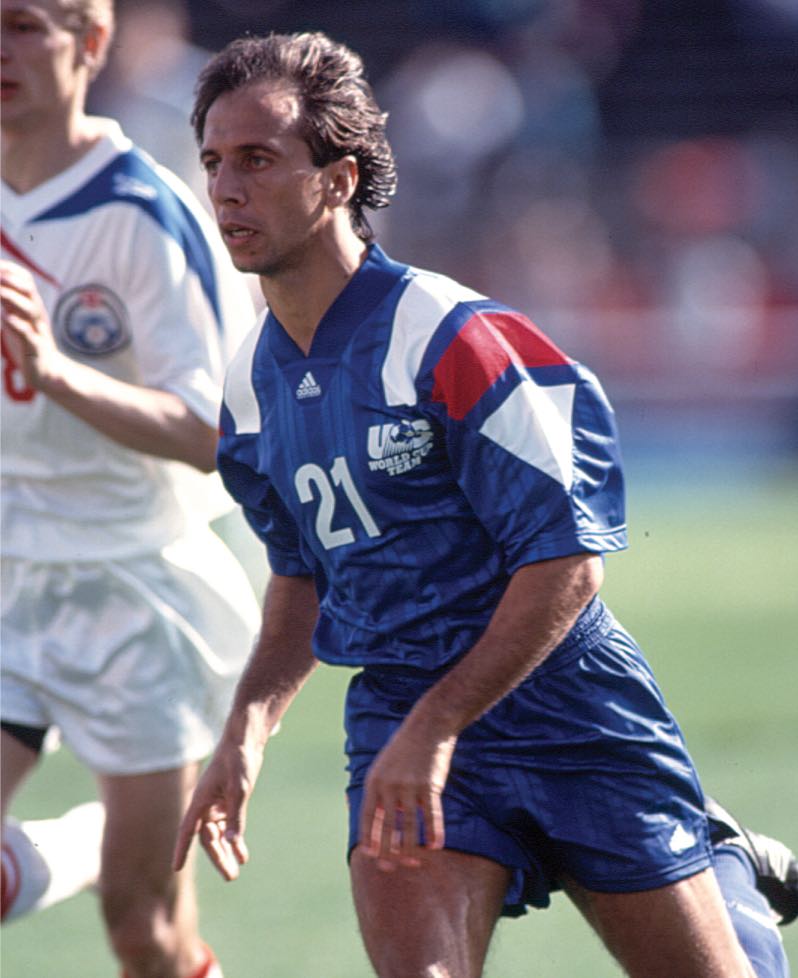 Clavijo, a Hall of Fame member, passed away from the cancer in 2019, but Balboa felt they always will possess a unique bond. When hiking eight months ago, Balboa felt Clavijo was with him.

"Out of the corner of my eye I saw this blue shadow because he always said he wanted to join me on my hikes," he said. “All of a sudden, I froze up. I couldn't move. I had chills."

He called Clavijo's wife Martha and asked if Fernando had a blue sweatshirt.

"She sent me a picture,” Balboa said. “His favorite sweatshirt was the blue sweatshirt I saw when I was hiking. God rest his soul. He's not with us but everywhere I go, he will always be there."

A World Cup on Home Soil

Balboa returned to action in December 1993 and went on to make the USMNT World Cup roster. The defender helped the USMNT reach the Round of 16 at USA ‘94, upsetting Colombia, 2-1, before a capacity crowd at the Rose Bowl. The South Americans were among the favorites to win the World Cup. The USA had a six-game winless streak (0-5-1 mark) against Colombia.

"I remember walking out and looking at [Carlos] Valderrama and all these guys," he said. “There was a different look on their faces. It wasn't the jovial running and screaming. It was very relaxed, very quiet. It was a very strange mood to begin with.”

In the seventh minute, Mike Sorber and Clavijo saved a close encounter off the goal line.

"If you look at that moment on, we played a little better soccer," Balboa said. "They started chasing us. I remember as a team that we were a little nervous walking out. We just grew and everything went our way. … I remember that day as the best team performance we gave."

Colombia defender Andres Escobar scored an unfortunate own goal, who was later murdered back home days later, and Earnie Stewart added an insurance score. Balboa, who came close to scoring via a 79th-minute bicycle kick, was over the moon because his family, including his grandfather, attended the match.

"You saw a team celebrate, not individuals," he said. "It was that point that we knew, man, we can beat better teams, we can beat Colombia. It was the No. 1 ranked team in the world after what they did to Argentina in the World Cup qualifier [5-0 win]. They were the favorites to get out of the group. They were the favorites to get to the final. I couldn't be any prouder of a team for how we found a way to beat a team we had yet to beat in three years."

After a revision of caps earned by players in the late 1980s and early 1990s, Balboa’s 100th cap is now recognized as having come in the USA’s 2-1 win against Chile on July 8, 1995 at Copa America. Even with the change, he was still the first to achieve the feat. 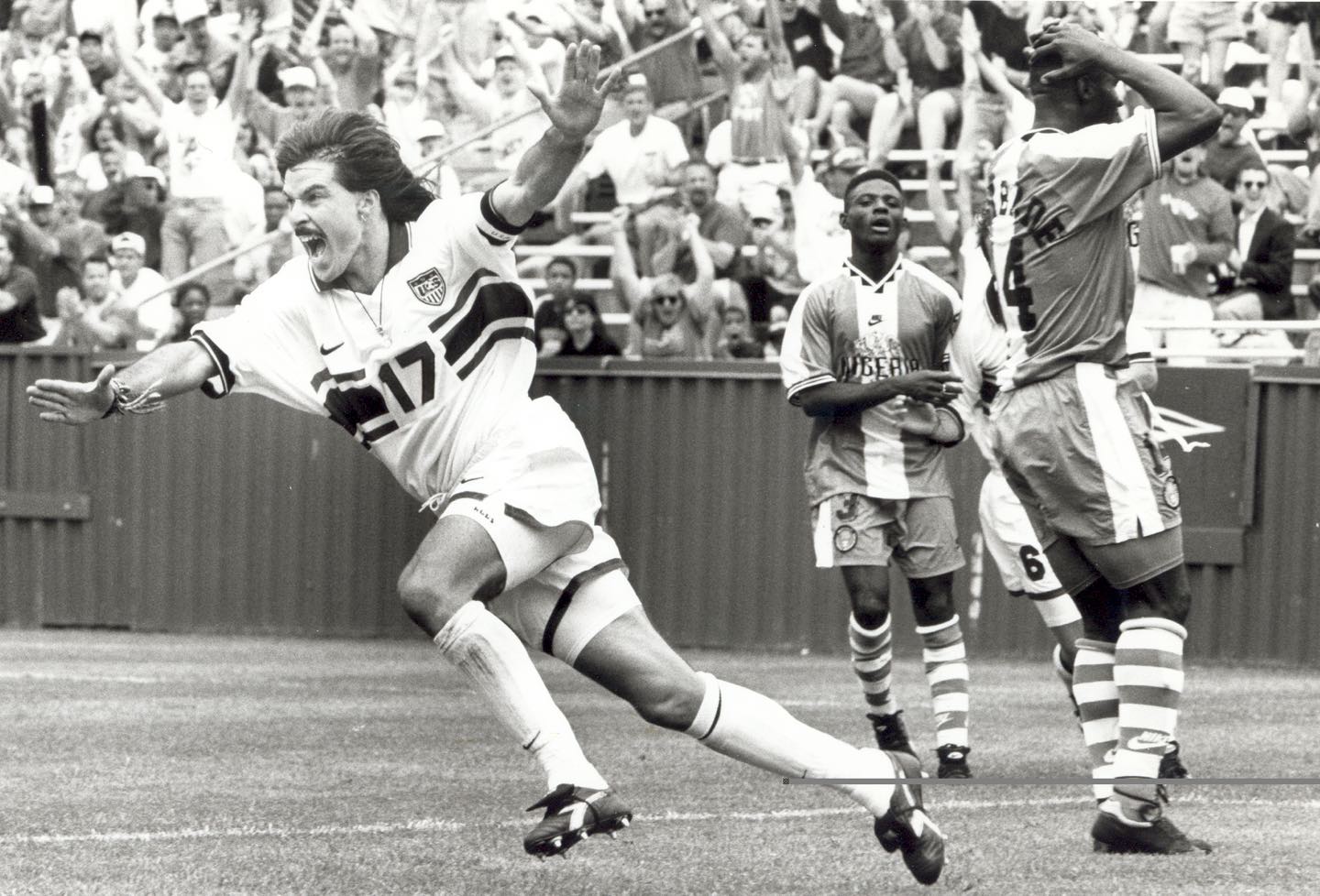 "It never crossed my mind that I would be first to reach 100 caps," he said. "It didn't even concern me because Bruce Murray [85 caps] … was inching up closer and closer. Coaches change, players change. All of sudden I started inching closer to that 100th cap. I really didn't know what it meant at the time because I didn't know I would be the first player ever to reach 100 caps.

"I think everybody like, 'What was 100 caps back then?' " he said. "It's special to me now. Being the first player to do something. That's a part of history."

The 53-year-old Balboa, a TV commentator since his retirement, has witnessed the influence of Hispanic players in the U.S. When MLS was established, he noted such soccer icons as Hugo Sanchez, Marco Etcheverry, Raul Diaz Arce, Ronald Cerritos, Mauricio Cienfuegos, Leonel Alvarez and Valderrama ventured to the U.S. to help to seed the modern pro landscape.

"We had some fantastic players," he said.

"You're going to play soccer when you grow up as a Hispanic-American. I'm an American-Hispanic. I watched the Latin players. They made a conscious decision. Valderrama could have gone and played anywhere. He made the decision, like Etcheverry, to help soccer grow here because they saw what this country has and what it could offer to this sport. 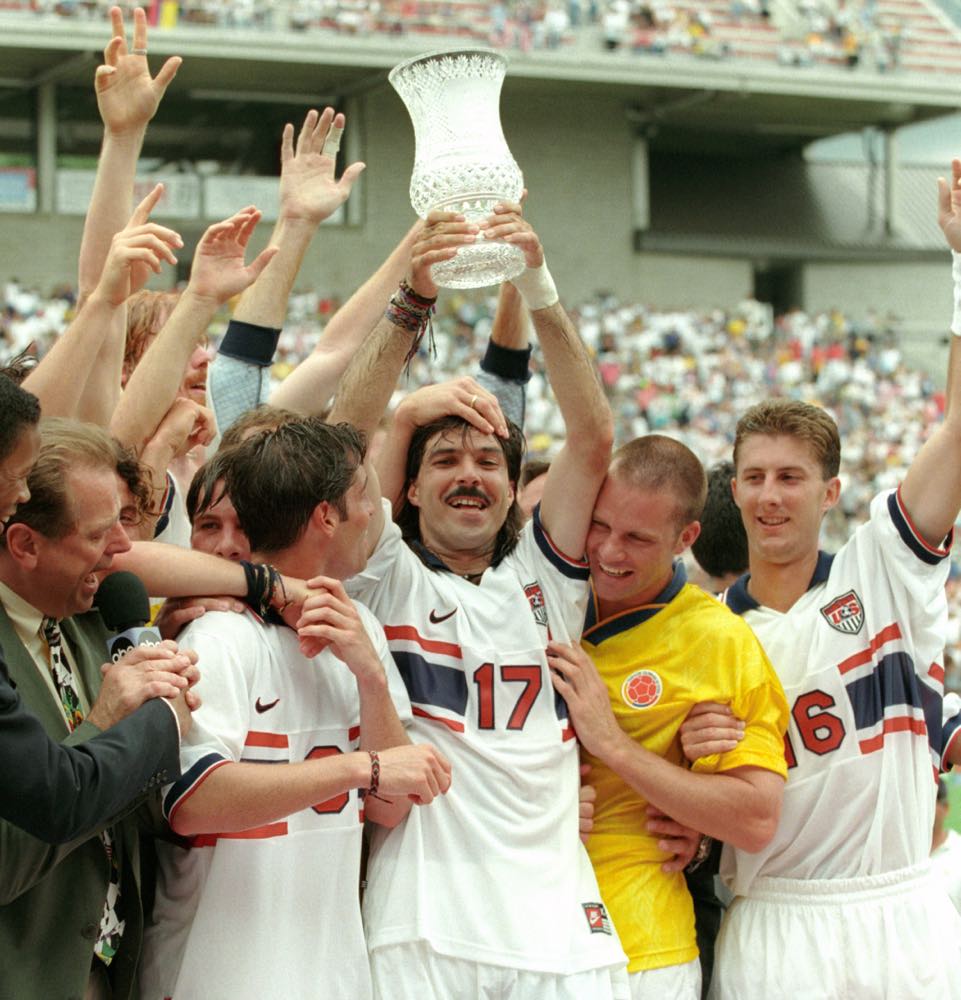 "It's funny, I get labeled American sometimes, I get labeled Hispanic sometimes because my mom and dad are Argentinean. But our independence in the United States, it's one of the those things that it gives kids an opportunity to look up to the freedom that we have in this country to play in an academy  because we didn't have academies back then to be looked at, to go to college. There were no Hispanic heritage funds back then were you could get Hispanic kids in times of need to pay for college."

Somehow, it keeps going back to passion.

"When you look at the roots here in the United States, we live and breathe soccer," Balboa said. "It's a good day if Mexico wins for the Mexican fans. It's a bad day if it loses. It’s a bad if your Brazilian team loses. Our happiness sometimes revolves around our sports teams."

Just like Marcelo Balboa's life always has revolved around soccer.