Semifinals Kick Off June 3 in Denver; USMNT Takes on No. 13-Ranked Switzerland on May 30 in Pre-Tournament Warmup
May 24 2021
On the Pitch

CHICAGO (May 24, 2021) – U.S. Men’s National Team head coach Gregg Berhalter has selected the 23 players that will represent the United States in the Concacaf Nations League Final Four. Along with Costa Rica, Honduras and Mexico, the USMNT is seeking to capture the inaugural tournament title. The roster, presented by Biosteel, will be officially submitted later today.

In preparation for the event, the USMNT will take on No. 13-ranked Switzerland on May 30 in St. Gallen as the USA prepares for its final match ahead of the Concacaf Nations League Final Four. ESPN, UniMás and TUDN will broadcast the match live from kybunpark at 2 p.m. ET.

“We are excited to gather this group together as we compete to win the Nations League trophy,” USMNT head coach Gregg Berhalter said. “It’s been a great year for our player pool and the unprecedented successes of winning multiple league and cup championships. Our focus now becomes continuing this success with the National Team.” 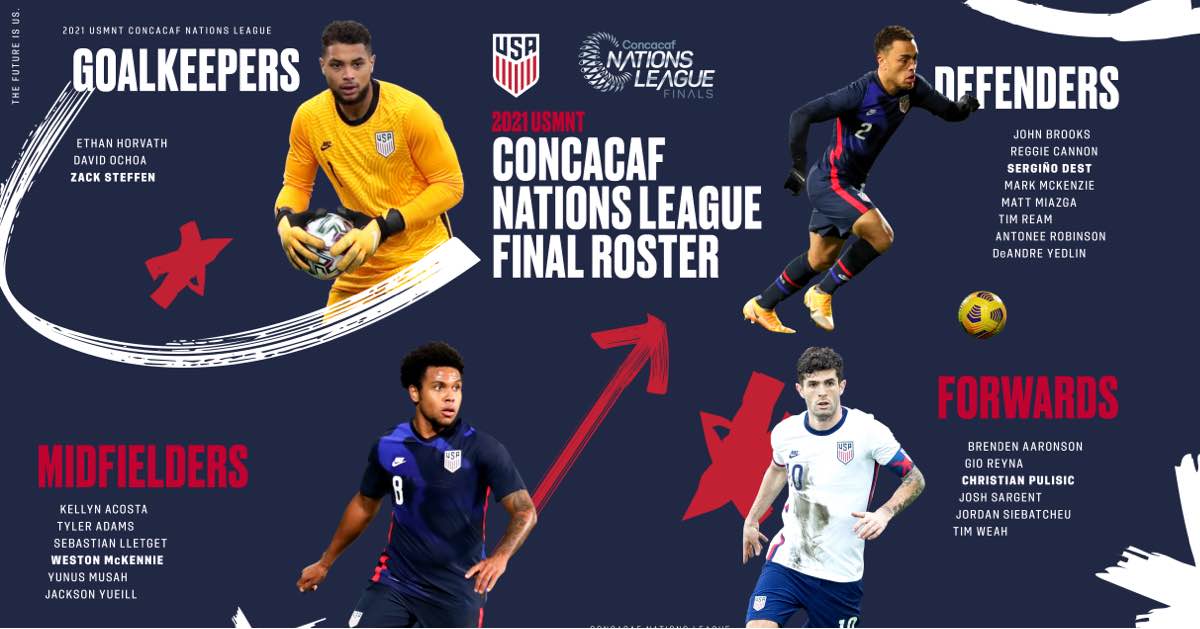 With the USMNT competing for a pair of trophies this summer - the 2021 edition of the Concacaf Gold Cup is set to kick off in July – several players have already earned silverware with their clubs. In fact, a total of nine players on the roster are entering with a championship under their belt. Brenden Aaronson did the double, winning the Austrian Bundesliga and Austrian Cup. Zack Steffen also won two trophies with Manchester City, backstopping the club to the English League Cup and becoming the first USMNT player to win the Premier League. Sergiño Dest (Barcelona) lifted the Copa del Rey in Spain, with Weston McKennie (Juventus) in Italy along with Gio Reyna (Dortmund) in Germany and Mark McKenzie (Genk) in Belgium also winning their respective cup competitions. Tim Weah is a French league champion with Lille, his outfit winning for the first time since the 2010-11 campaign, while Ethan Horvath and Club Brugge are league winners for the second season running and Jordan Siebatcheu helped Young Boys to the top of the Swiss league table for the fourth consecutive year.

And still, one big title remains. The USMNT will gather around the screen the evening of May 29 to watch a teammate lift the UEFA Champions League trophy, as Christian Pulisic and Steffen square off when Chelsea takes on Manchester City in the final.

Members of the USMNT finished in top four teams in each of the five biggest leagues in Europe, starting with the league title winners in England (Steffen, Manchester City) and France (Weah, Lille). In Germany, U.S. internationals populate three of the top four with Tyler Adams (RB Leipzing, 2nd), Gio Reyna (Borussia Dortmund, 3rd), and John Brooks (Wolfsburg, 4th). Sergiño Dest completed his first season at Barcelona with the Catalan club finishing in third. Christian Pulisic and Chelsea secured the fourth spot on the final matchday, a feat and position matched Weston McKennie and Juventus.

All eight players will a part of next year’s UEFA Champions League.

Due to the global pandemic, the USMNT enters the summer with a scarcity of matches in official competition, having played only four since the 2019 Concacaf Gold Cup. Overall, the 23-player group averages just under six caps in official competition, with a total of 10 seeking their first. The leader of the squad is 2014 FIFA World Cup veteran DeAndre Yedlin (27), followed by Christian Pulisic (24) and Tim Ream (19).

ROAD TO THE FINAL FOUR

The U.S. Men’s National Team finished atop Group A of Concacaf Nations League A and advanced to the Final four after posting a 3-1-0 record in matches against Cuba and Canada.

Weston McKennie, Jordan Morris and Josh Sargent paced six different U.S. goal scorers with three apiece. McKennie and Morris put their names in history books against Cuba on Oct. 11 in Washington, D.C, with McKennie recorded the USMNT’s fastest hat trick from the start of a match just 13 minutes in while Morris scored a goal and provided a record-tying three assists.

The May 30 encounter is a lead-in to three significant competitions in 2021, beginning with the Concacaf Nations League Final Four. Winners of League A’s Group A, the USMNT takes on Honduras in one semifinal, while Mexico and Costa Rica will square off in the other, with the winners competing for the inaugural Nations League title.

The USA will have a chance to meet one of its closest Concacaf rivals on June 9 in the friendly against Costa Rica in Salt Lake City. Heading into this summer, the USMNT have a narrow 17-16-5 edge in the series through a rich history of 38 matches played since 1975.