DENVER, Colo. (June 3, 2021) – The U.S. Men’s National Team advanced to the inaugural Concacaf Nations League Final after defeating Honduras 1-0 in the first semifinal on an 89th-minute diving header from second-half substitute Jordan Siebatcheu. The match was played in front of a large, energetic crowd at Empower Field at Mile High.

The win sends the USA to the title game against the winner of tonight’s second semifinal between Mexico and Costa Rica. The Final will be contested on Sunday, June 6 at 9 p.m. ET and will be broadcast live on Univision, TUDN, Paramount+ and the CBS Sports Network.

The winning goal came as the match looked to be headed to penalty kicks. From about 35 yards out and in the center of the field, defender John Brooks, who played very well in the middle of the U.S. back line, lofted a pass into the right side of the penalty area that was headed back into the middle by Weston McKennie. The crashing Siebatcheu dove to power his header home from just outside the six-yard box, setting off a wild celebration among the U.S. players and staff.

Fresh off his victory with Chelsea in the 2021 Champions League Final, Christian Pulisic was one of three changes MNT head coach Gregg Berhalter made to the lineup from Sunday’s match against Switzerland in St. Gallen. Goalkeeper Zack Steffen, whose Manchester City side faced Chelsea in the Champions League Final, and defender Antonee Robinson were the other two changes.

The USA was playing its first official competitive match since November 2019, and defender Mark McKenzie, forward Gio Reyna, defender Antonee Robinson and Siebatcheu all made their first non-friendly appearance tonight and are now officially cap-tied to the United States moving forward. 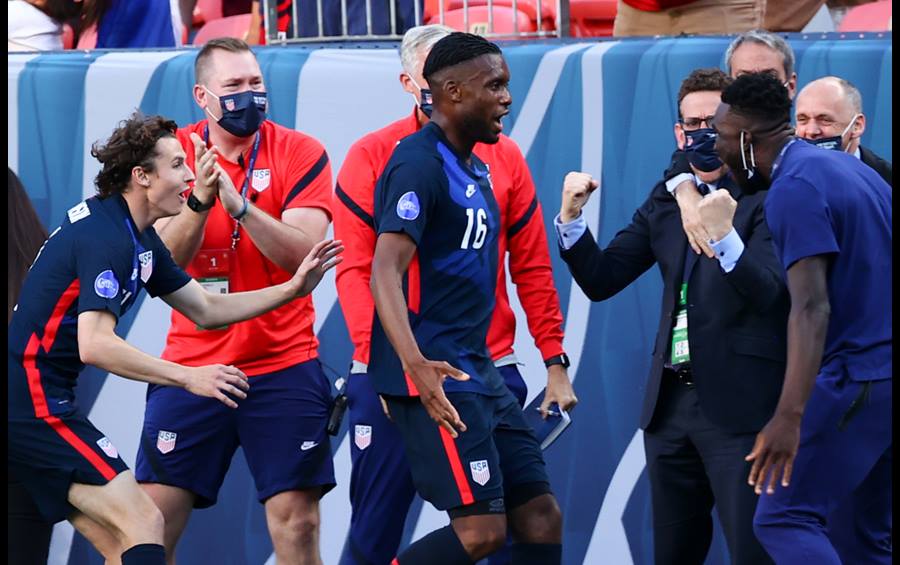 A wide open first half played at altitude and in front of fans – something many players had not experienced in a while playing for the National Team -- saw both teams create opportunities, but it was the USA that showed more consistent play offensively as no less than five different players had quality chances.

Reyna was the first to get in on the action, creatively slaloming through two defenders in the penalty box before shooting inches wide of the left post. McKennie then got on the end of a Sebastian Lletget corner but his header from 12 yards out went high. Reyna also had a shot deflected in front of goal, as did Sergiño Dest on the ensuing corner kick.

Honduras also caused the U.S. defense a handful of tense moments, most dangerously when Sargent prevented a sure goal by acrobatically heading a ball off the goal line that was looping into the net. Honduras forward Alberth Ellis twice got behind the defense but could not connect with teammates in front of goal.

The plays of the game -- until the final minutes – were Sargent’s goal line save at the half hour mark and a monster kick save from Steffen in the 51st minute to deny Antony Lozano on a breakaway.

Opportunities waned in the second half - until the final minute of regulation time - when Brooks, McKennie and Siebatcheu combined for the late-game heroics to send the USA to Sunday’s Final.

USA – JORDAN SIEBATCHEU (BRENDEN AARONSON), 89th minute: The U.S. made its final chance on the attacking end count. John Brooks pushed high up the field and chipped pass from the center of the field into the right side of the penalty area. McKennie rose to meet the ball and sent a header back into the middle. Midfielder Brenden Aaronson, who was making a hard near post run, got the slightest touch before it bounced perfectly to Siebatcheu who launched his considerable frame and sent a diving header rocketing past Honduran goalkeeper Luis Lopez and high into the net. It was the first international goal for Siebatcheu. USA 1, HON 0

USA – JOSH SARGENT, 27th minute: Josh Sargent had the defensive play of the half – and perhaps the game. Honduras whipped in a long free kick from the left touchline to the far post where Alberth Ellis headed the ball towards goal over the onrushing Zack Steffen. Tracking his man, Sargent beat Honduran forward Antony Lozano to the falling ball on the goal line, heading it away with back of his head to prevent a goal.

HON - LUIS LOPEZ, 30th minute: Minutes after his heroic save on the defensive end, Sargent had one of the better chances on the other side. U.S. left back Antonee Robinson picked out Sargent with a well-placed ball just inside penalty box. Timing his run between two defenders, Sargent left his feet and sent a powerful header towards goal, but Honduran goalkeeper Luis Lopez did well to dive to his left to make an acrobatic save.

HON - LUIS LOPEZ, 31st minute: Soon after stopping Sargent, Lopez was well positioned to save a Christian Pulisic shot at the near post. Gio Reyna picked up a ball near midfield and attacked the goal, waiting for Pulisic to join on the left before playing him a short pass forward. Pulisic did well to get the ball to his left but his shot from close range was saved by Lopez.

USA – ZACK STEFFEN, 51st minute: Lozano again found himself with a great opportunity, running onto a ball behind the defense on the right wing and raced in at goal unmarked. U.S. goalkeeper Zack Steffen read the play and perfectly timed his move out of goal to cut off the angle. Steffen making himself big and blocking the shot with his right leg - and back off Lozano - for a goal kick.