Five Things to Know About Qatar

In the first meeting between the squads, the top defensive side (United States) of the Concacaf Gold Cup will tackle the best attacking team (Qatar) in the semifinals at Q2 Stadium in Austin, Texas on Thursday, July 29 at 7:30 p.m. ET (FS1, Univision, TUDN).

The U.S. Men's National Team has surrendered only one goal in four matches while accruing three shutouts. Qatar has accumulated a tournament-high 12 goals in four games.

Qatar, which does not have to qualify for the 2022 World Cup because it is the host nation, has been searching for challenging competitions. Concacaf invited the defending Asian Cup champions to the Gold Cup. 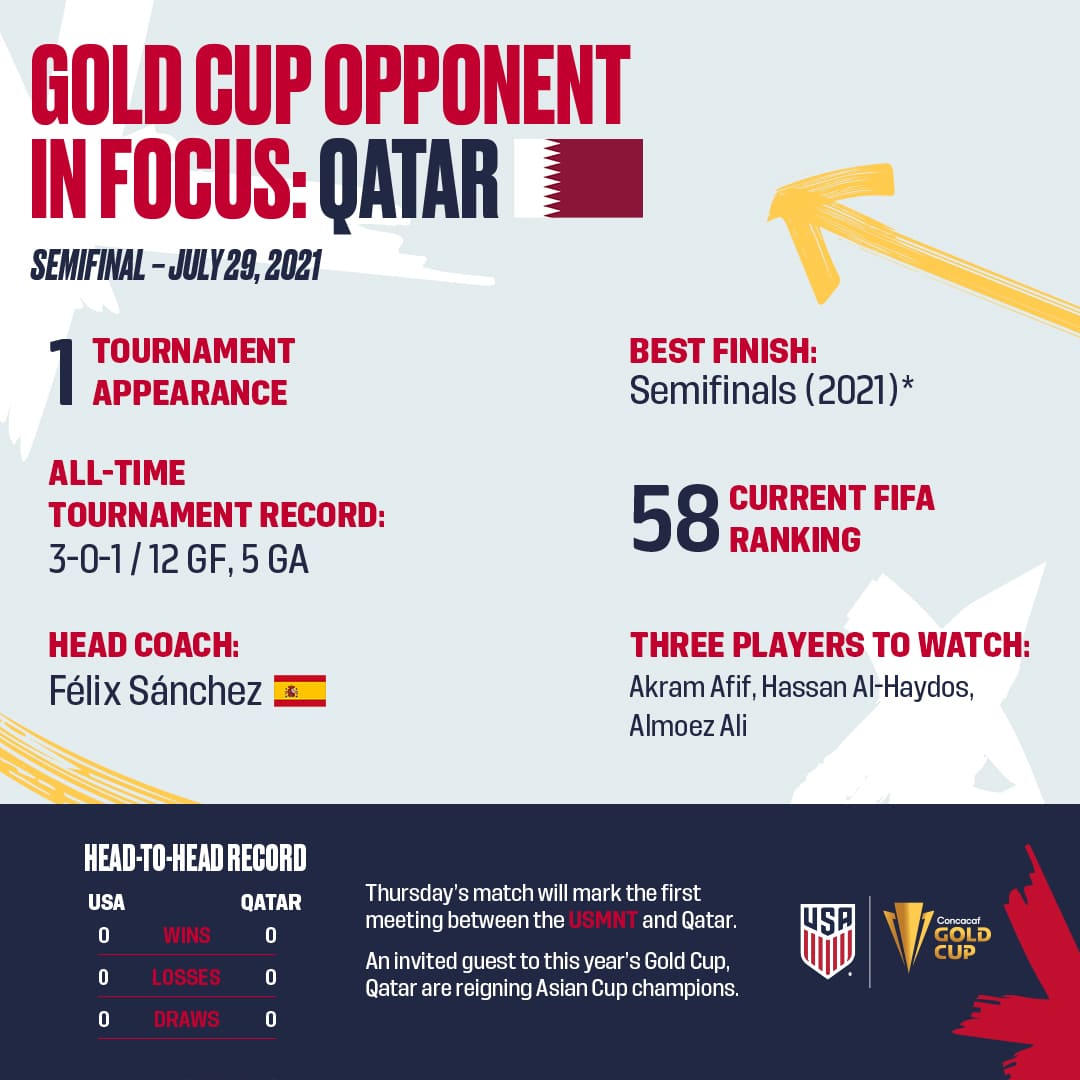 Qatar's first FIFA World Cup appearance will be as the host country, and compared to the rest of the world they are relatively new to the football universe. The Qatar Football Association was established in 1960 and the organization joined FIFA a decade later.

The national team's crowning glory to date came at the 2019 AFC Asian Cup, which it won for the first time. The team went a perfect 7-0-0, which included a 3-1 victory against Japan in the championship match. The Maroon outscored its opposition, 19-1.

Félix Sánchez, 45, has guided The Maroon since 2017. After working with an FC Barcelona youth team for a decade, he joined Aspire Academy in Qatar. Since then, Sánchez also has directed the country's Under-19 and U-23 squads.

Under his guidance, the U-19 team captured the 2014 Asian Football Confederation Championship. Sánchez's success at that level opened the door for him to coach the full national side, replacing Uruguayan Jorge Fossati. He was brought in to prepare the team for the 2022 World Cup.

The Spaniard guided Qatar to the AFC Asian Cup title in 2019.

In the Gold Cup Group D, The Maroon started with a wild 3-3 draw with Panama as Akram Afif, Almoez Ali and Hassan Al-Haydos found the back of the net on July 13. They followed that up with a 4-0 triumph over Grenada on July 17 as Mohammed Muntari, Abdulaziz Hatem, Afif and Ali scored. Then came a 2-0 blanking of Honduras behind goals by Homam Ahmed and Hatem to win the group with a 2-0-1 record on July 20.

In Saturday's quarterfinal, Qatar rolled to a 3-0 advantage by the 56th minute and held back a late El Salvador rally en route to a 3-2 win. Ali scored on either side of halftime and Hatem added a goal.

Ali has paced Qatar with seven goals in 2021, including a tournament-leading four goals at the Gold Cup. He is followed by Hatem and Hassan Al-Haydos with five apiece.

The USA and Qatar full national teams have never played each other.

Qatar will become the USMNT's 98th different international opponent all time. They will also be the 10th country the Americans have faced from the Asian Football Confederation. The nations have twice met in the group stage of the FIFA Under-20 World Cup, playing to a 1-1 draw at the 1981 competition in Australia and most recently in 2019 when current USMNT forward Tim Weah tallied the lone goal in a 1-0 win.

The entire 23-man squad is domestic-based, and in a rarity, all the players hail from only four clubs. That certainly helps with team chemistry and continuity.

Al-Sadd boasts a dozen players on the squad, followed by Al-Duhail (seven), Al-Gharafa (three) and Al-Rayyan (one).

Ali and Hatem have formed a lethal one-two punch in the Gold Cup.

Ali, 24, who captains Al-Duhail, is the competition's scoring leader (four). He has an excellent strike rate, finding the net in almost half his international matches (34 goals in 66 games). One of his most notable performances was a four-goal effort in a 6-0 win against Korea DPR at the 2019 AFC Asian Cup, finishing with a tournament-record nine goals.

Hatem, who has scored nine times in 83 international appearances, is tied with five other players for second place in the Gold Cup (three goals each). On July 24, Concacaf determined that Hatem scored the Gold Cup's goal of the day in the eighth minute of the 3-2 win against El Salvador. At 30, the Al-Rayyan midfielder is among the team's oldest and more experienced players.

In the Gold Cup, Sánchez has decided to go with less experienced Barsham (eight caps), 23, in goal, over veteran Saad Al Sheeb (75 appearances), who is the oldest member of the squad at 31. Both play for Al-Saad.