CHICAGO (Oct. 6, 2021) - After a strong start to World Cup qualifying boosted the U.S. Men’s National Team into a tie for second place in the Octagonal standings, the USA will kick off the next phase of its journey to Qatar 2022 against Jamaica on Thursday, Oct. 7 in Austin, Texas. USA-Jamaica marks the start of another set of three games in seven days for the USMNT as it embarks upon Concacaf’s Final Round of World Cup qualifying, a rigorous slate of 14 matches through seven months against the region’s best teams.

Thursday’s match marks the USMNT’s first World Cup qualifier match in the state of Texas. Coverage from Q2 Stadium is set for 7:30 p.m. ET on ESPN2, Univision, TUDN and Sirius XM. The pregame show begins at 7 p.m. ET on Univision and TUDN. Fans can follow the USMNT during World Cup qualifying on Twitter (@USMNT), Instagram (@USMNT), Facebook and the official U.S. Soccer App.

A number of players return to the USMNT fold for its October slate. Two veteran MLS forwards are back with the team after coming back from injury in Paul Arriola and Gyasi Zardes. Both players bring previous World Cup qualifying experience with seven and four appearances, respectively. Zardes comes into USMNT training camp after scoring three goals in his last two matches for the Columbus Crew and the striker will have the chance to don the red, white and blue at his club’s new home, Lower.com Field, in the window’s final match vs. Costa Rica on Oct. 13.

Gianluca Busio, Matthew Hoppe and Shaq Moore rejoin the USMNT after playing key roles in the team’s 2021 Gold Cup championship run, while Yunus Musah and Tim Weah are back from injury after being part of the squad that captured the inaugural Nations League title. 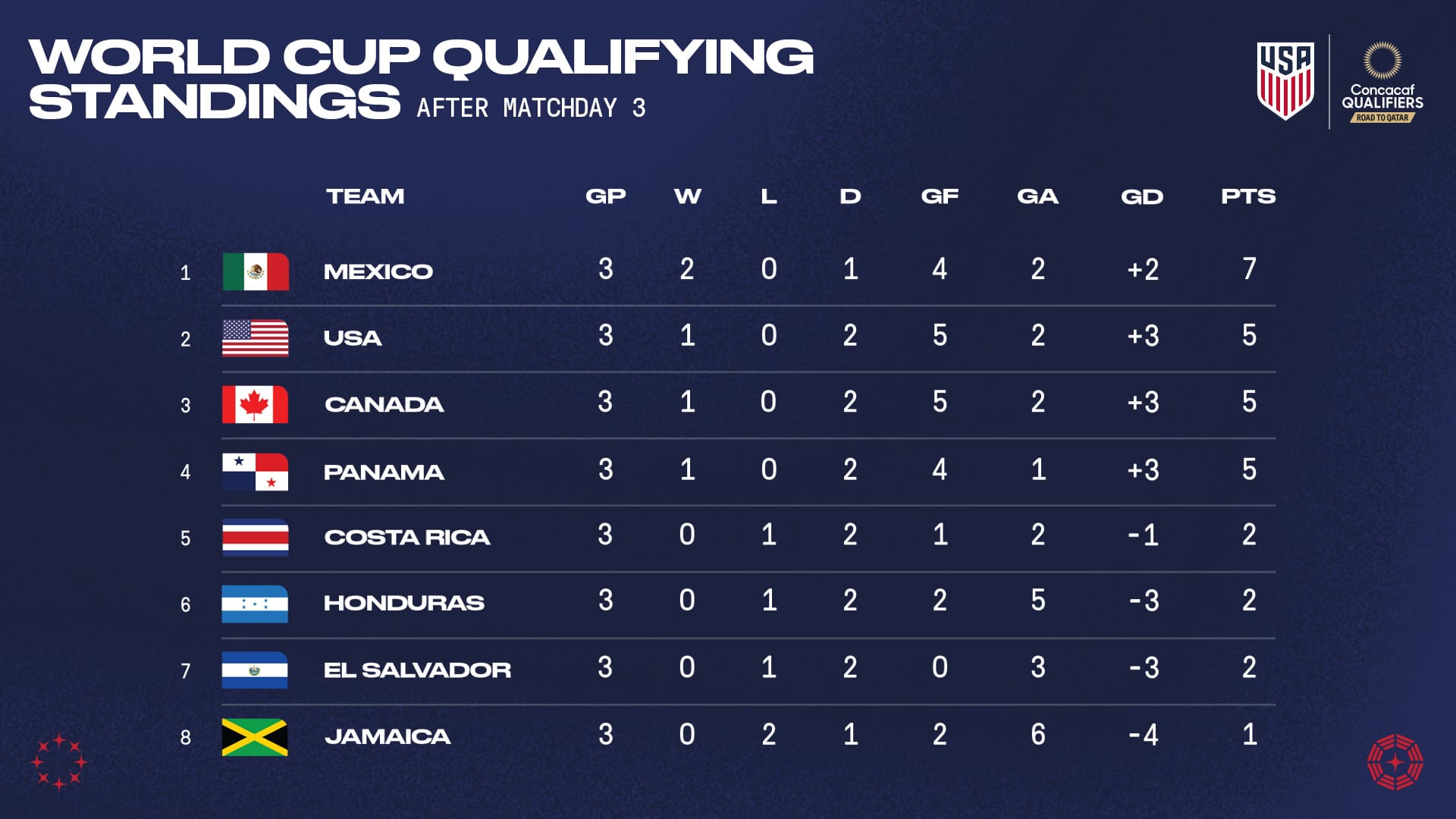 The new format for Concacaf’s Final Round of World Cup qualifying presents an unprecedented challenge: 14 games against the confederation’s strongest teams across seven months and five international windows. The U.S. got off to an undefeated start in the “Octagonal,” drawing its first two matches before closing the September slate with an emphatic 4-1 win at Honduras. With five points through its first three matches, the USA is tied for second in the qualifying standings with Canada. The USMNT’s five points are the second-highest point total from the previous six qualifying cycles in which the U.S. began with two of three matches away from home.

After hard-earned draws at El Salvador and vs. Canada in Nashville to start the September international window, the U.S. finished its first set of World Cup qualifying matches with an offensive outburst in a historic 4-1 win at Honduras. Trailing at the half, a number of key substitutions and 18-year-old forward Ricardo Pepi sparked the USMNT to four unanswered goals for a come-from-behind victory and three important points. Earning the start in San Pedro Sula for his senior team debut, Pepi scored the game-winning goal, added two assists and set up the fourth and final tally with a hard-hit shot.

September provided an introduction to the challenges of Concacaf World Cup qualifying to the USMNT’s young player pool. Sixteen players made their World Cup qualifying debut, including a record-tying 12 in one match during the USA’s opening draw at El Salvador. Overall, head coach Gregg Berhalter used 22 different players and 21 different starters.

The September World Cup qualifying matches continued a year of important experience in official competition for the youthful USMNT. Many players made their debuts in official competition during two confederation championship runs this summer: 10 players on the October roster were a part of the Nations League Final-winning squad, while 13 helped the USMNT lift the Gold Cup in August.

DEEP IN THE HEART OF TEXAS

While the USA has played 27 matches in Texas - the third-most of any state - Thursday night marks the USMNT’s first World Cup qualifier to be played in the Lone Star State. The U.S. won its first match at Q2 Stadium this summer, a dramatic 1-0 Gold Cup semifinal victory vs. Qatar. The U.S. Women’s National Team opened the new stadium in June with a 2-0 friendly win against Nigeria.

Jamaica enters the October international window sitting at last place in the Octagonal standings, dropping its first two matches before earning a draw at Costa Rica. With several key players based in the United Kingdom, Jamaica’s roster suffered from the “Red List” travel restrictions on individuals traveling to Mexico and Costa Rica last month.

Jamaica played a tightly-contested match at Mexico to open up World Cup qualifying. The teams were scoreless through halftime and the Reggae Boyz equalized midway through the second after Mexico took a lead in the 50th. It took an 89th-minute goal from Henry Martin for El Tri to secure the win. Jamaica then fell 3-0 at home to Panama in the most lopsided Octagonal result to that point before picking up a point with a come-from-behind draw at Costa Rica. Forward Shamar Nicholson scored both goals for Jamaica in the September window.

U.S. SOCCER OUT AND ABOUT IN ATX

Even before the USMNT takes the field on Thursday night, U.S. Soccer events will take place across the state capital.

Around the USA-Jamaica World Cup qualifying match, a number of U.S. Soccer events will take place across the state capital. Fans can get hyped for the match at the U.S. Soccer x Budwesier Kickoff Party, set for Wednesday night at the Lustre Pearl Rainey and start their gameday early at the Fan HQ party outside Q2 Stadium on Thursday at 3 p.m.. The pregame festivities include games, music, giveaways and more.

In addition to fan events, U.S. Soccer is putting on a number of community programs, presented by Allstate. U.S. Soccer Coaching Education, alongside Austin FC, the 4ATX Foundation and South Texas Soccer Association are hosting a free Coach for Community clinic on Oct. 8 and 9. The Federation also partnered with Breakthrough Central Texas to host a One Nation Youth Program sports industry career panel and will recognize Austin-based storyteller, racial justice educator and organizer Virginia Cumberbatch as the One Nation Game Ambassador for Thursday’s match.