Tuesday’s Kickoff from Independence Park Set for 5 p.m. ET on Paramount+ and Universo
November 15 2021
On the Pitch

CHICAGO (Nov. 15, 2021) – Reaching the halfway point of World Cup Qualifying in first place in the group, the U.S. Men’s National Team will look to keep its momentum rolling at Jamaica. The USA enters the match in first place in the Octagonal standings as the showdown with the Reggae Boyz marks the eighth of 14 games during Concacaf’s Final Round of World Cup qualifying. The U.S. topped Jamaica 2-0 during their first Octagonal matchup on Oct. 7 in Austin, Texas

Tuesday’s kickoff from Independence Park is set for 5 p.m. ET on Paramount+ and Universo. Fans can follow the USMNT during World Cup qualifying on Twitter (@USMNT), Instagram (@USMNT), Facebook and the official U.S. Soccer App.


Midfielder Weston McKennie (yellow card accumulation) and defender Miles Robinson (red card) were each suspended for one match following the USA’s 2-0 win against Mexico in Cincinnati and have departed camp. As a result, head coach Gregg Berhalter added defender James Sands to the roster for USA-Jamaica. The 21-year-old has made seven appearances for the USMNT this year, including every match of the team’s 2021 Gold Cup championship run. He also started in the team’s 4-1 WCQ win at Honduras on Sept. 8.

The USMNT wrote another chapter in the storied history of “Dos a Cero” victories against Mexico on Friday night before a sell-out crowd of 26,000 at Cincinnati’s TQL Stadium. Dominating after the halftime break, the USA broke things open in the 74th minute as Tim Weah teed up Christian Pulisic just minutes after the Chelsea forward entered the match. Pulisic headed it home in his first game for the USMNT since picking up an injury at Honduras in September World Cup qualifying. Weah also helped set up the insurance goal, putting in a ball for McKennie, who exchanged with forward Jesús Ferreira before slotting his effort inside the 85th minute to ensure the 2-0 victory.

The win marked the first time that the USA has beaten Mexico three times in a calendar year, with all three victories coming in official competition. The USA is now 5-1-1 in home World Cup qualifying matches against Mexico since the 1998 World Cup cycle, with all five wins coming in the state of Ohio and by 2-0 score lines.

If the “Dos a Cero” victory against Mexico wasn’t sweet enough, the result was also the team’s 16th win of 2021, tying the USMNT record set in 2013 for most wins in a calendar year. Still with Tuesday’s WCQ at Jamaica and the December 18 friendly against Bosnia and Herzegovina left in 2021, Gregg Berhalter’s side has the opportunity to set a new mark.

Here are the USMNT’s highest win totals in a calendar year:

Friday’s victory against Mexico was also Gregg Berhalter’s 30th as head coach of the U.S. Men’s National Team, making him the fastest USMNT head coach to achieve that benchmark. He’s now tied with Bora Milutinovic for fourth on the USMNT’s all-time wins list.

PULISIC MOVING UP THE SCORING CHARTS

Though still only 23 years old, Christian Pulisic’s tally against Mexico continued to push the attacker up the USMNT’s goal scoring charts. His 74th minute header was the 17th goal overall, tying him with DaMarcus Beasley, Michael Bradley and Earnie Stewart for ninth on the USMNT’s all-time goalscoring list.

The goal also marked his eight in World Cup qualifying, moving him into seventh place among USMNT players in that category.

REMATCH WITH THE REGGAE BOYZ

Jamaica is the first opponent that the USMNT is playing twice during the 14 matches of the Octagonal. In the home leg, the USA downed the Reggae Boyz 2-0 on two goals from 18-year-old forward Ricardo Pepi in Austin, Texas, the USMNT’s first World Cup qualifier to be played in the Lone Star State.

Tuesday meeting marks the USA’s fourth matchup with Jamaica this year. The teams met in a friendly in Austria on March 25, a 4-1 win for the U.S. thanks to a pair of goals from Sebastian Lleget and tallies from Sergino Dest and Brenden Aaronson. They also clashed in the Concacaf Gold Cup Quarterfinals, a 1-0 shutout win as Matthew Hoppe netted his first international goal in the 83rd minute en route to the tournament title. 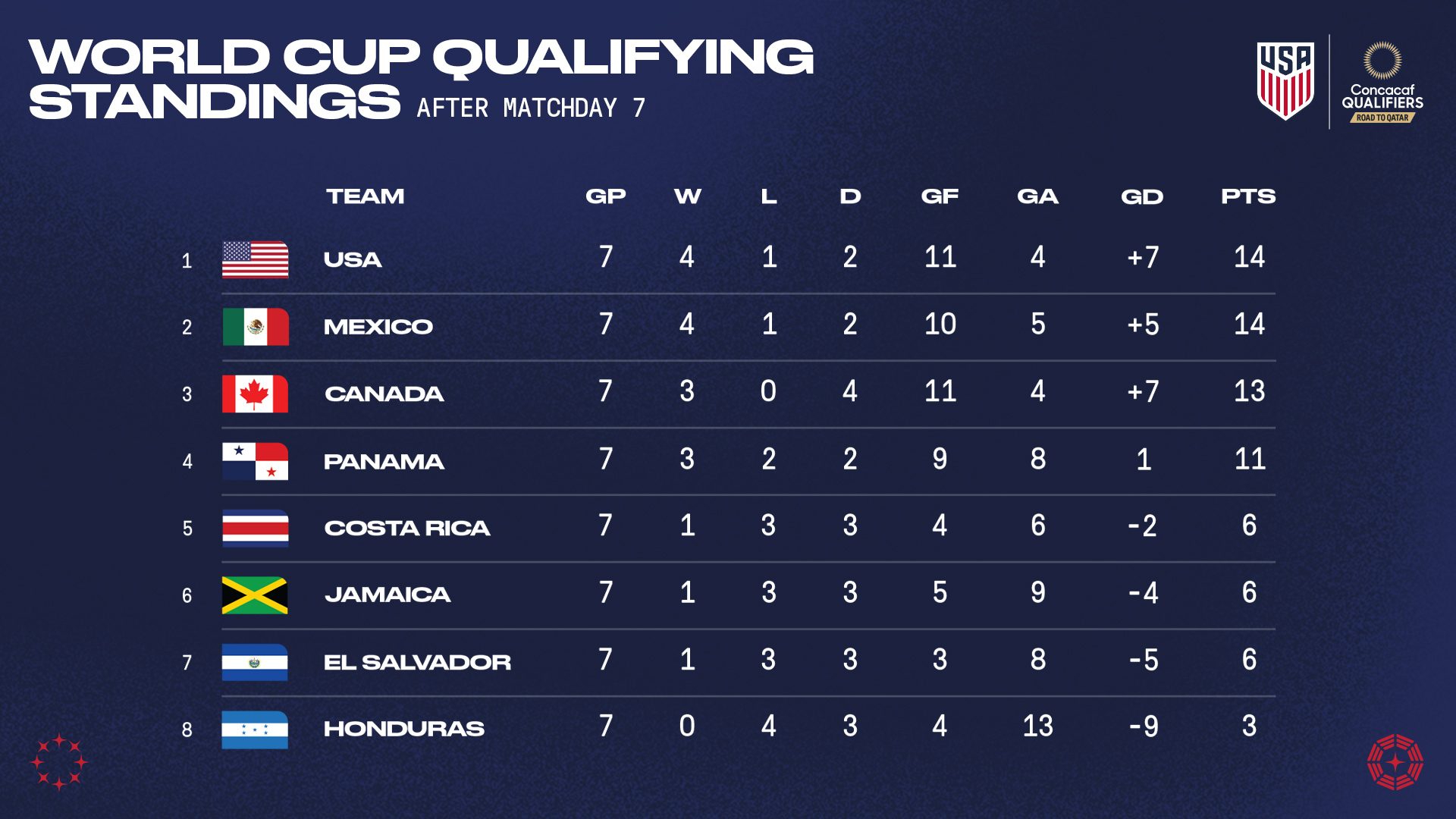 Jamaica is currently sixth in the Octagonal standings at the halfway point of the Final Round of World Cup qualifying, tied on points with Costa Rica and El Salvador after accumulating one win and three draws. In their first match of the November window, the Reggae Boyz played El Salvador to a tight 1-1 draw in San Salvador. Forward Michail Antonio, currently third in scoring in the English Premier League this season with West Ham United, netted in the 82nd minute, but El Salvador’s Alex Roldan, brother of USMNT midfielder Cristian Roldan, equalized in the 90th.

After falling 2-0 to the USA in Austin during the October window, Jamaica played Canada to a 0-0 draw at home and picked up its first win of the Octagonal with a 2-0 win at Honduras. The Reggae Boyz will play five of their remaining seven matches at home.