CHICAGO (Jan. 31, 2022) – Currently in second place in the final round of World Cup Qualifying, the U.S. Men’s National Team aims to finish its slate of three winter qualifying matches in seven days on a high note as it takes on Honduras in St. Paul, Minn. After facing freezing conditions in its first two games, forecasts project that the Twin Cities will set a new USMNT record for coldest home kickoff temperature (currently 29 degrees), setting the stage for a memorable match on the road to Qatar 2022.

Midfielder Tyler Adams has been diagnosed with a right hamstring injury and defender Chris Richards with a right ankle injury following Sunday’s game at Canada. Both players will miss Wednesday’s match vs. Honduras and are continuing to be evaluated to establish an expected timeline for their return.

After a strong start to the January/February World Cup qualifying slate in Columbus - a 1-0 victory vs. El Salvador - the U.S. traveled to face Octagonal-leading Canada and fell 2-0 to its northern neighbor. Despite a majority of possession and attacking chances, Canada got on the board early with a tally from Cyle Larin in the seventh minute and the USA wasn’t able to find an equalizer. Samuel Adekugbe netted an insurance goal late in second-half stoppage time as the U.S. fell to Canada in World Cup qualifying for the first time since 1980.

Scheduling changes due to the COVID-19 pandemic set the stage for a special January/February international window and the slate of games has lived up to its frigid fanfare. The kickoff temperature in Columbus, Ohio was 29 degrees, while Hamilton, Canada was a chilly 22 degrees. Forecasts for Wednesday night predict single digits -- which would be the coldest home kickoff temperature in USMNT history.

After Canada selected to host USA-Canada in Ontario, U.S. Soccer doubled down on the arctic conditions and chose to host its two home qualifiers in the midst of the Midwest winter. Groundskeepers in Minnesota are well-prepared for the elements and will have Allianz Field’s playing surface high-quality playable for a match of this caliber.

Throughout the window, the USMNT has embraced the unique home-field advantage afforded by the freezing temperatures and potential for winter weather.

“I want it to be freezing. I want it to be cold,” said USMNT defender Walker Zimmerman. “I want the snow. I want to be a part of something so iconic that I saw and I really remember growing up. And that’s exciting to me. So, I think the guys are ready to embrace it, and it will be a really good environment for us fan-wise as well.”

TO THE TWIN CITIES

Wednesday’s match marks the USMNT’s second visit to Allianz Field, the home of Minnesota United FC that opened in spring 2019. The USA’s debut in St. Paul also marked its first match in the Land of 10,000 Lakes, a 4-0 victory in the opening match of the 2019 Gold Cup vs. Guyana. Current call-ups Paul Arriola and Gyasi Zardes both scored in the game, kicking off the USMNT’s run to the tournament final.

Since announcing St. Paul’s Allianz Field as the venue for USA-Honduras back in November, U.S. Soccer has been preparing additional measures to ensure the safety of players and fans alike. Those additional considerations include providing complimentary hand warmers for all fans in attendance, setting up warming areas and additional medication stations throughout Allianz Field and ensuring hot beverage and food options at concessions stands inside the stadium.

“From the moment we announced the match, we’ve been taking all the necessary steps to ensure our players, staff and fans will be prepared to handle the cold,” said U.S. Soccer Chief Medical Officer George Chiampas. “That preparation is very similar to what we do when we’re preparing for the heat or the altitude when we go away to Mexico or Central America, but in this case we’re talking about cold. We’ve been in coordination with local health officials in the past two months, and we’re implementing countless mitigation measures similar to – if not above – what’s been done around colder sporting events to ensure resources and information are available to make sure everyone has a great experience.”

Click here for a full rundown of the safety measures in place for USA-Honduras.

The USMNT has fielded its four youngest World Cup qualifying line-ups ever through 10 games of the Octagonal, as the XI that took the field against El Salvador on Jan. 27 sporting an average of 23 years, 92 days.

This international window has also seen the return of veteran experience in forward Jordan Morris, who made his first WCQ appearance since Sept. 5, 2017 when he entered the match against El Salvador as a second-half substitute.

The USMNT’s road trip to Honduras during its first slate of World Cup qualifying matches in September provided one of the highlights of the Octagonal thus far. Playing in the hostile environs of San Pedro Sula, the USA fell behind 1-0 before forward Ricardo Pepi and a number of highly effective second-half subs sparked the U.S. to a 4-1 victory.

Eighteen-year-old Pepi enjoyed one of the most memorable debuts in recent USMNT history, assisting on two of the goals, netting the eventual game-winner and taking a hard-hit shot to tee up the final tally. Antonee Robinson netted his first career international goal to equalize while fellow current call-ups Brenden Aaronson and Sebastian Lletget also scored. The win marked the USMNT’s second-ever victory after trailing at the half on the road in World Cup qualifying. 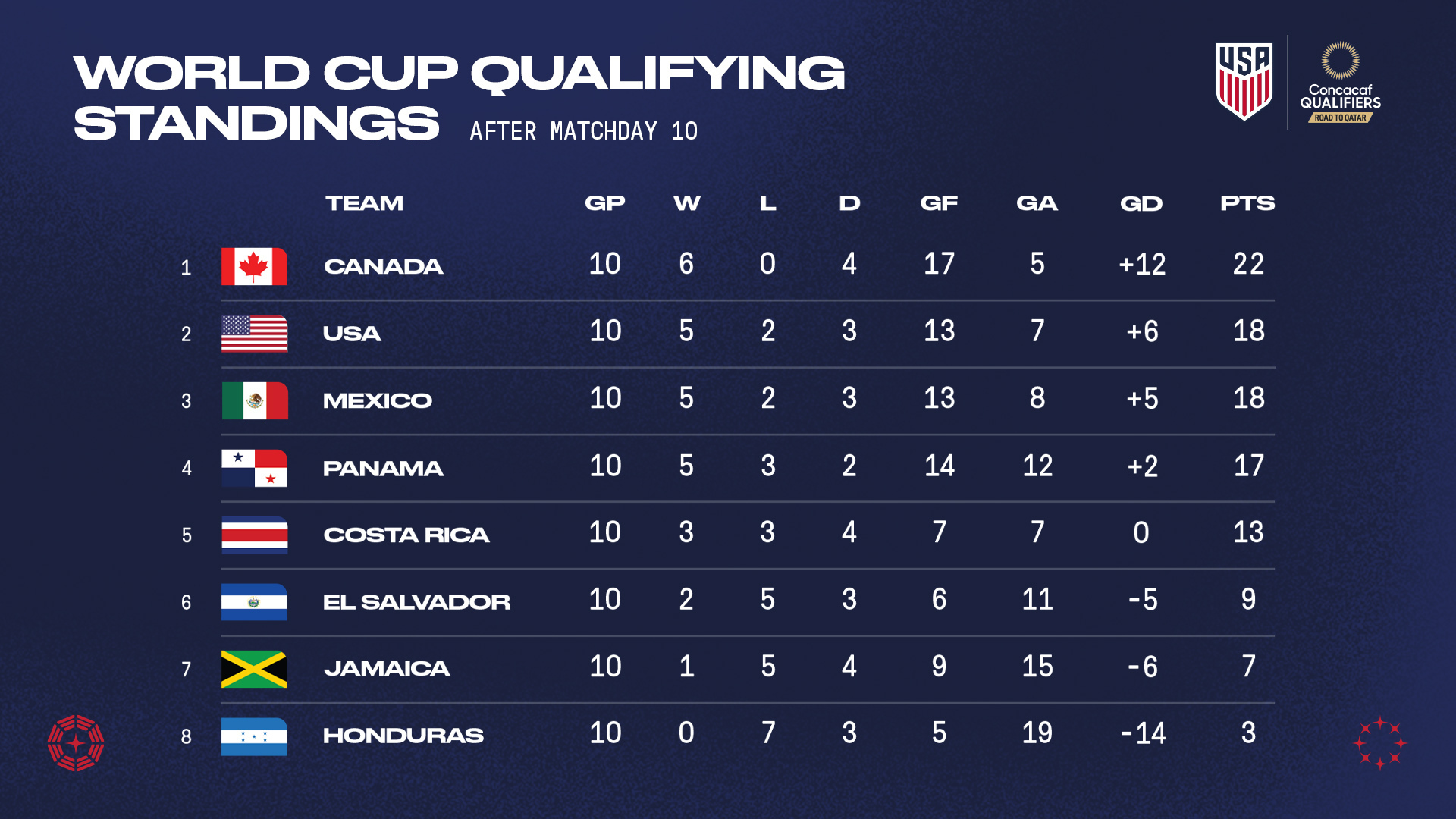 Honduras became the first team eliminated from the Octagonal with its loss at home to El Salvador on Sunday. Los Catrachos have had a rough go thus far in World Cup qualifying as the only team yet to win a game through the tournament’s first 10 matches. After a decently strong start to the cycle, drawing Canada and El Salvador on the road and taking the lead on the USA. A draw with Costa Rica in the opening match of the October international window was Honduras’ last result in World Cup qualifying.

The road hasn’t gotten any easier for Honduras during the winter WCQ slate. Playing at home in its first two matches, Honduras fell 2-0 to Canada with the opening tally an own goal and then dropped the second to El Salvador. After those results, Los Catrachos have to endure an enormous weather change from the hot and humid 80s to freezing temperatures in the Twin Cities as well as a very long travel day up to Minnesota. 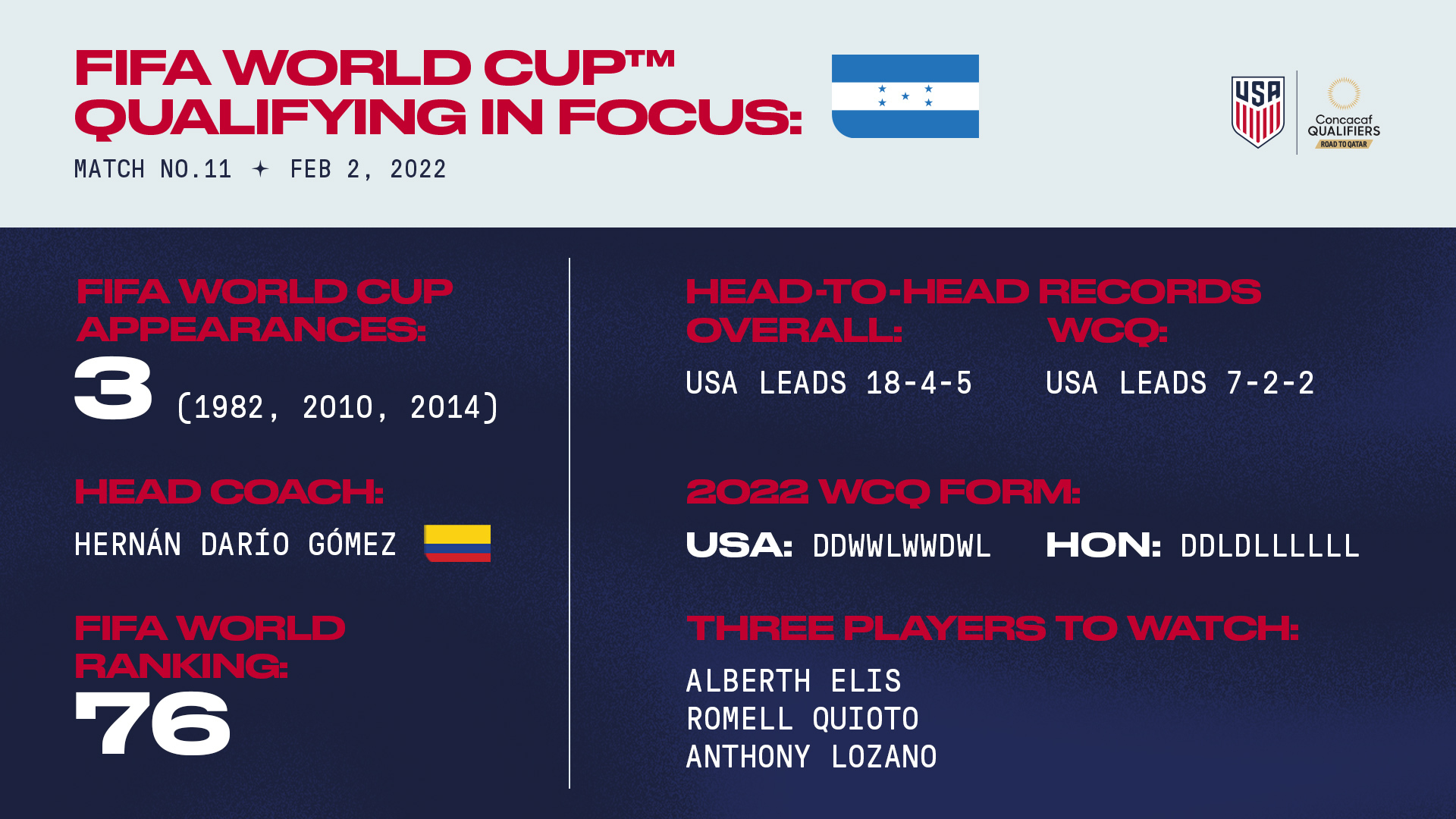