Read the latest in our ongoing Great Eight Series where we take a light-hearted Round-by-Round look at some of the magic moments of America’s favorite soccer tournament.
Jonah FontelaApril 22 2022
Open Cup

Fans of the 109-year-old Lamar Hunt U.S. Open Cup (in its 107th edition) live by its magic moments. And the Third Round of this 2022 competition tossed up a good few of those on April 19 to 20. Join usopencup.com for a look back at eight moments of note from 24 games in which 48 teams were evenly split between jubilation and despair. There were five upsets in all as Detroit City FC continued their glory run in Hamtramck and a brand-new Hailstorm from Fort Collins, Colorado did heavy damage in Salt Lake City.

We see you, Northern Colorado Hailstorm. You’re not the Earthquakes of San Jose – who did manage their own seismic Cup activity with a 5-0 rout of NISA’s Bay Cities – or the Minnesota Thunder of old, who stormed through to the semis in 2005. You’re a humbler thing, a minor weather adversity when measured against the catastrophes favored by most team-namers. But ice balls falling from the sky can do damage too. Just ask Real Salt Lake, so proud of their record-breaking 19,000-plus crowd on Wednesday night. All of them were there to bear witness to one of the great cupsets of recent memory. Robert Cornwall’s volley in the 70th minute saw this first-year team from USL’s League One best the 2009 MLS champions on their own home turf. And that, friends, is the sound of hard hail falling.

Two other third-division sides also stormed the Third Round. South Georgia Tormenta (that’s Spanish for storm) stunned Birmingham Legion – a second USL championship notch on their belt (and on the road) in the space of weeks. The owls of Union Omaha, named for a creature known far and wide as a keen predictor of storms, undid MLS’ four-time Open Cup champs Chicago Fire at Soldier Field. 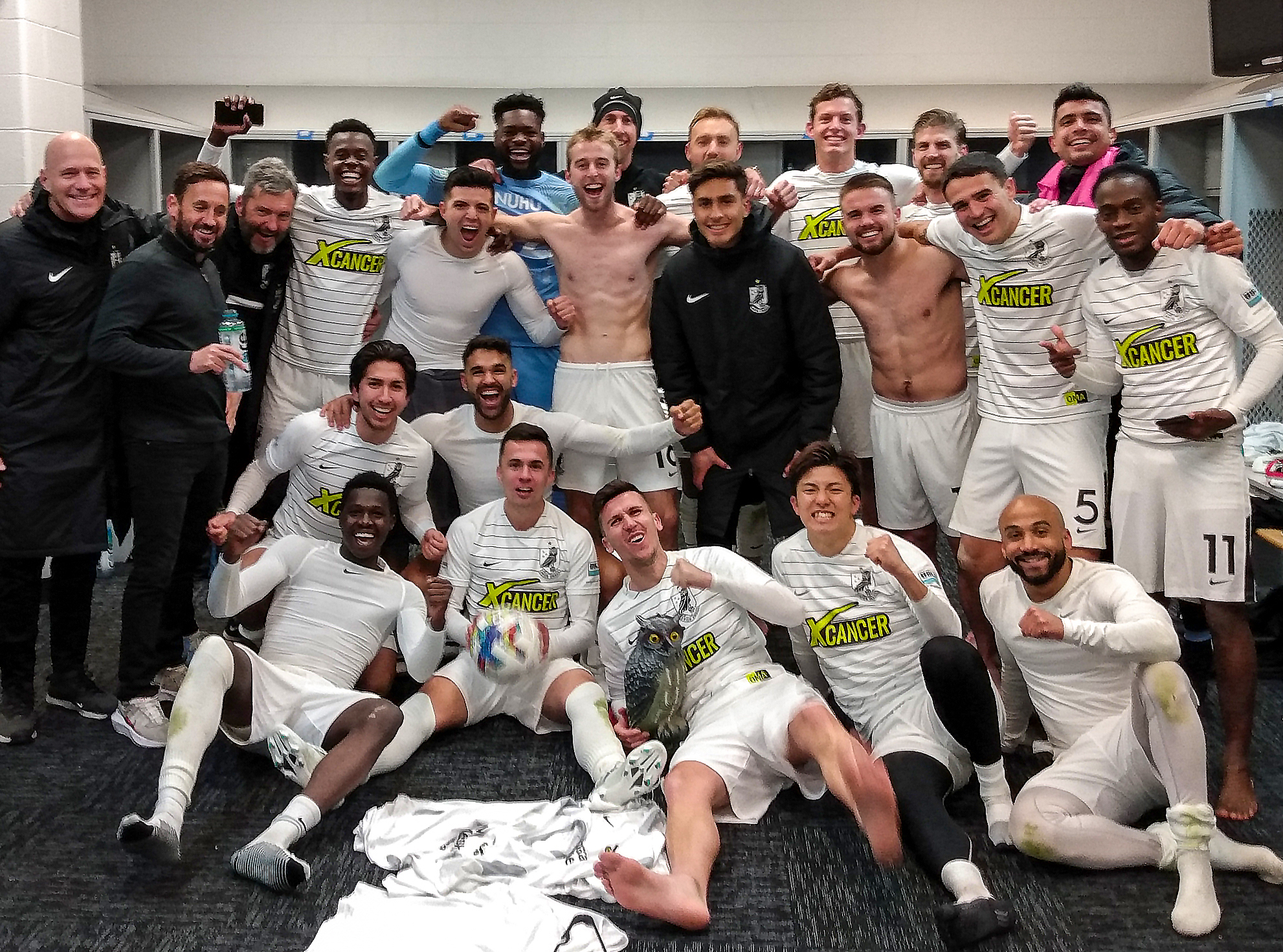 What is it about that old stadium? All rust and red brick. They call it Keyworth. Sounds dignified, right? A name speaking only to solutions and help and merit. Is it the railyard beside? A passing train, giving its customary toot to the home boys, nearly caused a startled Gyasi Zardes to knock the ball into his own goal. Is it that Keyworth sits smack in the middle of an honest-to-goodness neighborhood? It might have something to do with the fans – those banner wavers, chop-busters and thick-and-thin home team supporters. How they perched over the Columbus Crew players and howled sweet nothings. And how they danced when Maxi Rodriguez, cast off by previous clubs but right at home now, scored his second of the night. And the madness, the noisy disbelief, of the final whistle when a forlorn Crew player fired the match ball as far as it would go down those train tracks. Someone might find that ball one day, deflated in some changed future. Will they know what it saw? Or where it’s been?

Kljestans and Donovans Young and Old

Sacha Kljestan is an avowed lover of the Open Cup. It was fitting that this throwback creator, whose college coach and Cup legend Manny Schellscheidt said would “have been at home on any field in this country at any time,” led LA Galaxy out for their 2022 opener. He was surrounded by young teammates getting a first taste of the pro game. Kljestan, now 36, is the wily old head. The guide to help keep the young ones from slipping on the banana skins left out by the likes of the San Diego Loyal. The youngest, freshest face out there in Galaxy all-white, and looking up to Kljestan for guidance, was his own five-year-old son Knox. “I’ve wanted to walk out with him for years,” Kljestan said after posing for a Starting XI photo that included a pint-sized 12th man. “He was our lucky charm.”

Landon Donovan, who returned to Carson, California for the first time as an opposing team’s manager (and vice president and founder of the Loyal), had to contend with a resemblance that night too. Not a son’s loving eyes, but his own stoney countenance frozen in time in statue form on the concourse of the stadium where he won four MLS crowns and one Open Cup. It must be eerie to face your frozen self, trapped for all-time a winner, arms raised in victory, when you’re on the bus headed for home after a loss.

There’s a lot of talk about giant-killing in this old Cup of ours. Rochester NY FC (formerly known as the Rochester Rhinos) are legendary giant-slayers of the tournament. And they had an actual giant hiding on the bench. It was he who did the killing this time. Caique Santos, just 24 and on loan from Brazilian club Vitoria, is a former Brazil youth international and he’s eight feet tall if he’s an inch. He’s the largest man ever seen on a soccer field (give or take and subject to official review). He came on as a substitute with seconds to go in extra-time of a crazy Third Rounder against FC Motown which saw the Rochester men reduced to nine players for the last half hour (their assistant coach was also sent off). Santos came in for the shootout exclusively and, though we can’t swear to it, an audible gasp was heard from the group of Jersey boys lined up to take their kicks. He seemed to fill out the whole of the goal frame. And he saved two penalties. In the spirit of the game as it was played up to that point, he also got a yellow card for arguing with the ref after being judged to have left the line early in saving what would have been his third penalty kick of the night. So there you have it. Some giants actually do the killing. And we��re just fine with that, Mr. Santos.

The Open Cup is a place for first chances. Big breaks. More young guns than you can count took their first nervy steps as a pro in our old tournament. But it can be a place for second chances too – those rarest of universal generosities. New York Red Bulls captain Aaron Long played his first minutes after being cruelly felled by a ruptured achilles tendon and missing the whole of the 2021 season. The road back was long and littered with doubt. He spent months wondering if he’d ever play again. Or walk right. Or be the player you used to be. And while it wasn’t a cupset or a heavens-shaking result, the Red Bulls’ win over Hartford Athletic was the opportunity for Long to tie up his boots, shake away the ghosts and even score a game-winner. When the ball fell to him, as if gift wrapped and handed over happily, he looked almost embarrassed to tap home something so easy. But this is a man who deserves a little luck.

Only One Number Matters

All these numbers. Don’t they jumble so? But let’s stay focussed, people. OK? Here’s the one number that matters most from the Third Round of the 2022 U.S. Open Cup. Five (5). That’s the number of times a team from a lower division beat a team from a higher perch. Out of 24 games, a kind of lightning that defies reason and logic – and, yes, statistical considerations –  struck five times.  It happened in real life. Out on a soccer field. Not on paper. And we all felt it – from Detroit to Union Omaha, the Hailstormers of Fort Collins, Colorado, South Georgia’s Tormenta and, of course, San Antonio FC. We felt it in our bones and we dreamed right along with them. It’s all about as complicated as 1, 2, 3. Or maybe A, B, C. 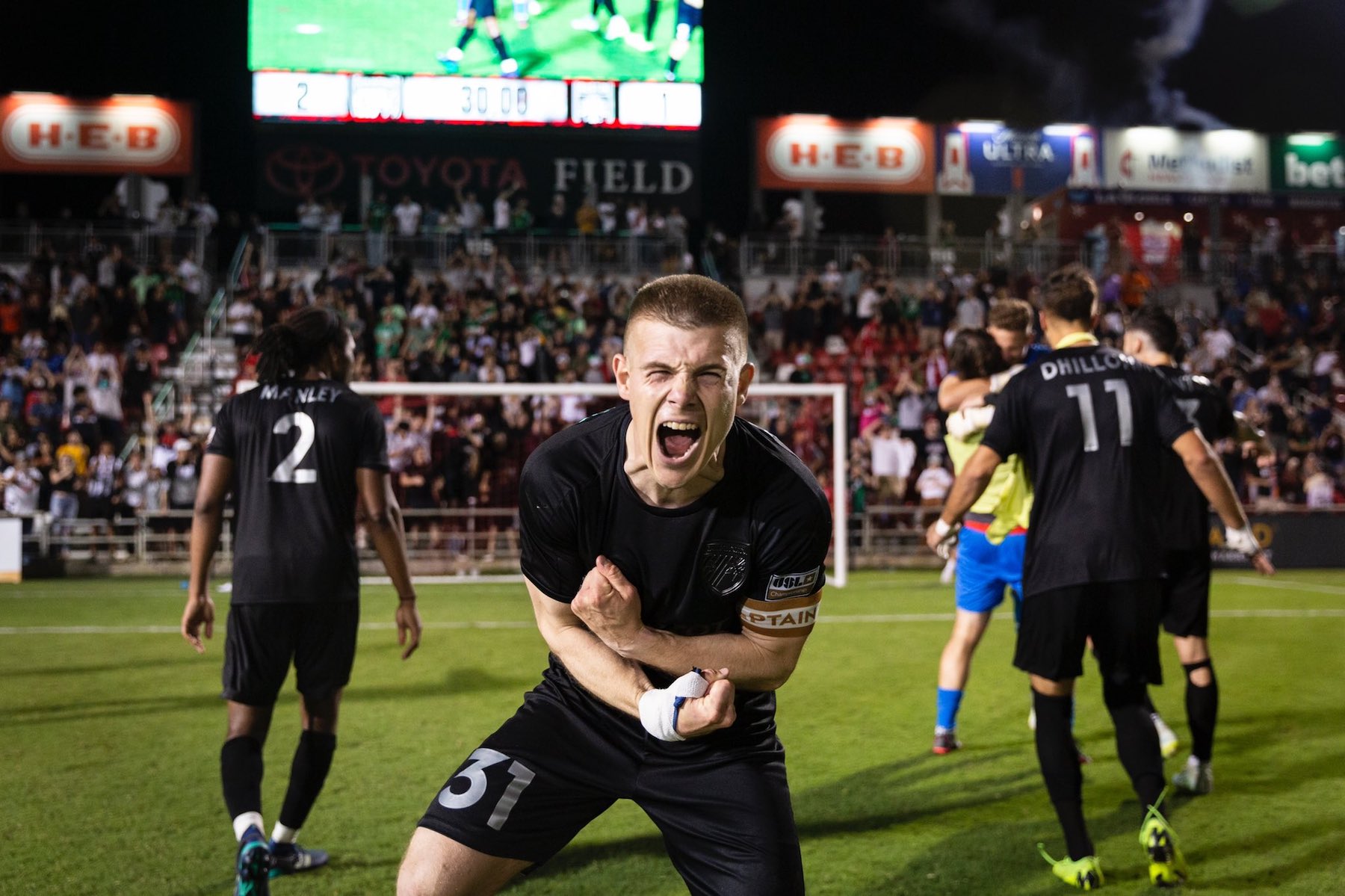 Chattanooga FC, now of the NISA League, made their Open Cup debut back in 2011. Their train motif is everywhere. The super-fan dressed as a conductor up in the bleachers at Finley Stadium. The tifos. The memes. It all stands to reason considering how the city’s history is bound up with railroad lore and, of course, Glenn Miller’s old standard ‘Chattanooga Choo-Choo’. But they met a team with a bigger (and meaner) train theme this time out. Atlanta United supporters hammer ceremonial golden spikes and the Terminus Legion is one of its noisiest fan groups. And this train, guided by U.S. international and captain Miles Robinson, is rolling hard and eating up the ground in front of it. They’re the last winners of the Open Cup. Can we call them defending champions? Maybe. But we can definitely remember two years ago in 2019, before the Pandemic and all its demands, when a huge crowd in the Mercedes-Benz Stadium saw Atlanta United lift the oldest prize in American soccer. And by the looks of it, they're aiming to keep that trophy down there in Georgia. It’s not greedy exactly, but four years is a long time…

This is the hard part. The fists in the air and the tears of joy, those are easy. But how do you say goodbye to the Fusion of Greensboro, those “hungry and humble” kids, without feeling like you’ve lost something? Or FC Motown, the men’s league fixtures from Jersey, who cobble together a team every week no matter the challenges (and there are many). Never stop being you, Forward Madison, you spirited flamingos from Wisconsin who always make a better place of the Open Cup. And Central Valley Fuego, from up Fresno way, what is there to say? So much talent. So much fight. And so much, well, fire. You pushed Sacramento Republic all the way on the road and they won’t soon forget your name. Neither will we. So thanks to you — and all of those who’ve left us. You’re already missed.