USMNT Draws England, Iran And Either Wales, Scotland Or Ukraine In Group B At The 2022 FIFA World Cup In Qatar

CHICAGO (April 1, 2022) – The U.S. Men’s National Team was drawn into Group B along with England, IR Iran and the winner of the UEFA Playoff between Wales, Scotland and Ukraine, during the 2022 FIFA World Cup Final Draw held today in Doha, Qatar.

Appearing in its 11th World Cup, the USMNT opens group play against either Wales, Scotland or Ukraine on Nov. 21. The USA will then meet England on Nov. 25 and finish group play with IR Iran on Nov. 29. The full tournament schedule, which includes venues and kickoff times, will be confirmed by FIFA at a later time. Due to the ongoing war in Ukraine, FIFA delayed until June the playoff semifinal between Scotland and Ukraine, as well as the final, where the winner will meet Wales.

All 2022 FIFA World Cup matches will be shown live on FOX Sports and Telemundo broadcast networks.

“We’re excited about our group and we’re looking forward to getting started on our preparations,” said U.S. head coach Gregg Berhalter. “I think overall, there are some difficult groups across the board. In our group in particular, we have England, who is a very strong team, and we have two opponents that we need to go deeper on. We don’t really know Iran that well, and then we have the unknown of who wins the UEFA Playoff. We won’t know that until June, but it’s exciting. We’ll be waiting on the edge of our seats to see who advances.” 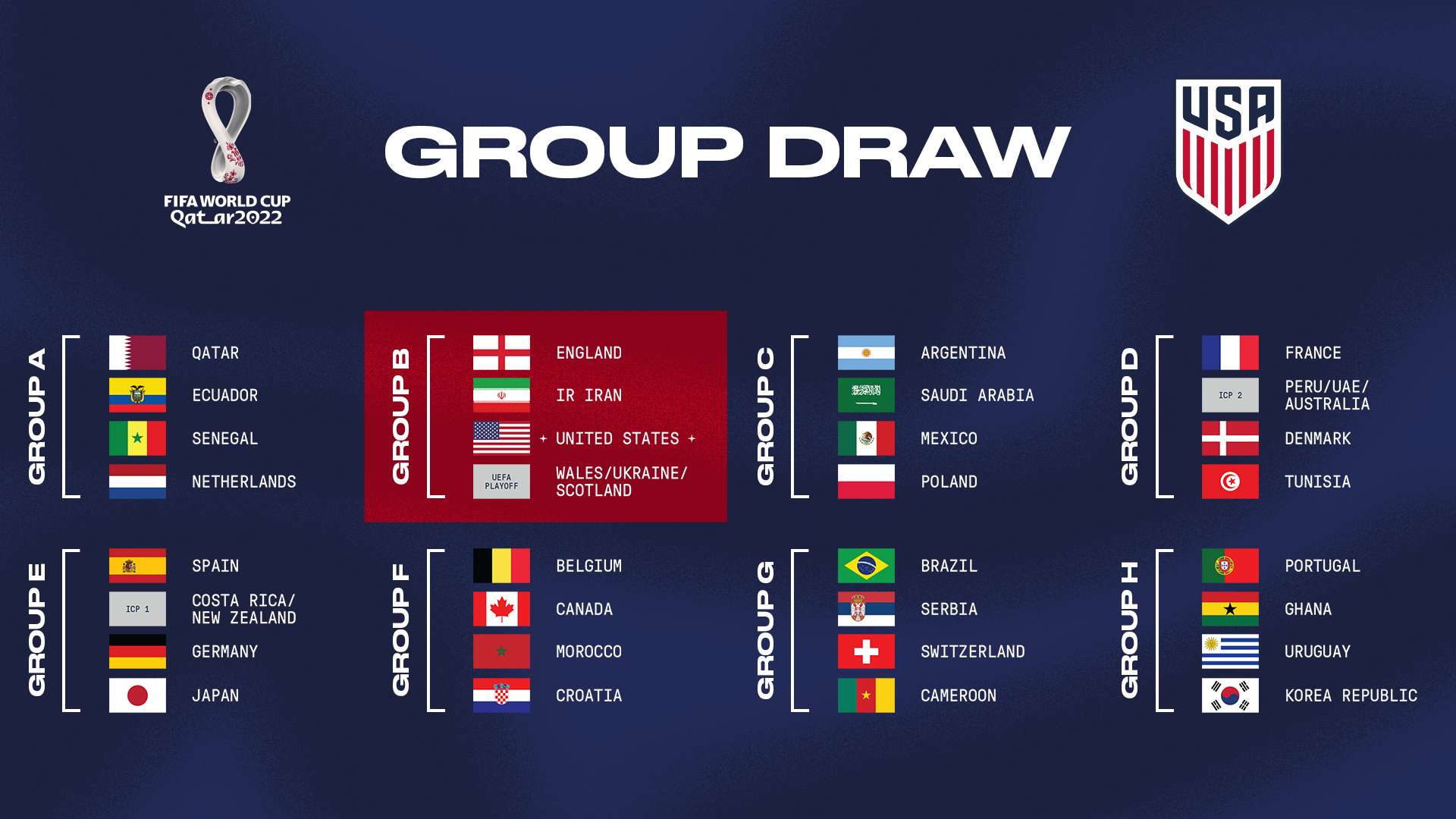 If the USMNT advances out of the group stage, it would face a team from Group A (Qatar, Ecuador, Senegal or Netherlands) on either Dec. 3 or Dec. 4

Utilizing the youngest lineups for World Cup Qualifying in USMNT history, the USA is gearing up for its seventh FIFA World Cup since 1990 and 11th overall appearance. Berhalter becomes the first man to represent the USA at the World Cup as both a player and a coach.

The USA has played 33 World Cup games in its history and holds an 8-19-6 all-time record.

USA’s All-Time Record against Group B Opponents and Potential Opponents:

Fast Facts: U.S. is unbeaten versus England in two World Cup meetings, both in the group stage … The U.S. won 1-0 at Brazil 1950 and played to a 1-1 draw at South Africa 2010 … The last meeting between U.S. and England was a November 15, 2018 international friendly in London at which England won 3-0 … England was the highest scoring team in UEFA World Cup Qualifying with 39 goals … Forward Harry Kane tied Netherlands forward Memphis Depay for most goals scored in UEFA World Cup Qualifying with 12 … Former England international David Beckham won two MLS Cup titles with the Los Angeles Galaxy (2011, 2012) … Beckham is President and Owner of MLS franchise Inter Miami … Former goalkeeper Peter Shilton is England’s most capped player with 125 appearances … Current Nashville SC coach Gary Smith is the only Englishman to have won MLS Cup as a head coach (Colorado Rapids, 2010).

Fast Facts: The lone meeting with U.S. at a World Cup came in Group F at France 1998, a match Iran won 2-1 … Iran had the second-most goals in AFC World Cup Qualifying with 49 (Japan had 58) … Former Iran defender Andranik Eskandarian played in the NASL from 1978-84 with the New York Cosmos … Eskandarian’s son, Alecko, played with five different teams in MLS and made one appearance with the USMNT … Current Colorado Rapids defender Steven Beitashour appeared in six games with Iran from 2013-14 …. One of the largest recorded crowds in international football history was in 1997 at Tehran’s Azadi Stadium when a reported 128,000 spectators attended Iran’s 1998 World Cup playoff versus Australia … Former forward Ali Daei is Iran’s all-time scoring leader with 109 goals.

Fast Facts: The most recent meeting between the U.S. and Wales was a 0-0 match in an international friendly on November 12, 2020 in Swansea, Wales … Winger Gareth Bale is a four-time winner of the UEFA Champions League with Real Madrid … Bale is also Wales’ all-time top scorer with 38 goals … Current defender Chris Gunter is Wales’ most capped player with 107 appearances … Wales’ best finish at a major tournament was a semifinal appearance at UEFA Euro 2016 … Wales’ only previous World Cup appearance came in 1958 and ended with a 1-0 quarterfinal loss to Brazil in which Brazilian legend Pele scored his first World Cup goal as a 17-year-old … Carl Robinson is the only Welsh head coach in MLS history, managing the Vancouver Whitecaps from 2014-18.

Fast Facts: The most recent meeting between the U.S. and Ukraine was an international friendly on March 5, 2014 in Larnaca, Cyprus at which Ukraine won 2-0 … Former midfielder Anatoliy Tymoshchuk is Ukraine’s most capped player with 144 appearances … Legendary striker Andriy Shevchenko is Ukraine’s all-time top scorer with 48 goals … Ukraine’s highest FIFA Ranking was 11th, attained in February of 2007 … Midfielder Oleksandr Zinchenko is teammates with U.S. goalkeeper Zack Steffen at English club Manchester City … Dema Kovalenko was the last Ukraine national to play in MLS … He played with the Chicago Fire, DC United, New York Red Bulls, Real Salt Lake and Los Angeles Galaxy from 1999-2010 … In its first and only World Cup at Germany 2006, Ukraine reached the quarterfinals, losing 3-0 to eventual champions Italy.

Fast Facts: The U.S. is unbeaten in its last five matches against Scotland, all international friendlies … The most recent meeting came on November 15, 2013, in a 0-0 draw at Hampden Park in Glasgow … Scotland took part in the first official international soccer match, against England in 1872 … Kenny Dalglish is Scotland’s all-time caps leader with 102 appearances … He is also Scotland’s all-time joint-top scorer with 30 goals, along with Denis Law … Notable former U.S. internationals who have played for Scotland’s most decorated club, Rangers, include Claudio Reyna, DaMarcus Beasley, Maurice Edu and Carlos Bocanegra … U.S. defender and 2021 Concacaf Gold Cup champion James Sands plays at Scottish club Rangers … Scottish coach Steve Nicol led the New England Revolution to MLS Cup Finals in 2002, 2005, 2006 and 2007.