When he guarded the net at the age of six, Danny Vitiello took surrendering goals quite personally.

"I didn't really understand the whole goalkeeping-soccer thing," the 26-year-old told usopencup.com. "So every time there was a goal scored, I’d start crying. My parents would always be like, 'Danny, they got to go through 10 guys before it gets to you. Stop worrying about it.'"

These days, it’s more tears of joy for Vitiello. He’s so often been the hero for his teammates and the passionate fans of his USL Championship side Sacramento Republic.

One save so far in a miraculous 2022 stands out above all the others. The one he made on former U.S. international Graham Zusi, which propelled the second-tier side from Northern California to an historic Lamar Hunt U.S. Open Cup Final.

All Eyes on the Prize

"Take a look at all the guys we have on this team and what we've been through and what we've accomplished, to say that we're going to an Open Cup final is unbelievable," said Vitiello, who’s conceded only two goals in six Open Cup games." We know they'll [Final opponents, Orlando City of MLS] have great players, great coaching, great fans."

Vitiello's heroics, and especially that save in the shootout win over Sporting Kansas City in last month’s Semifinal, are a major reason why the Republic are flying across the country to play in the Final (September 7 and live on ESPN+).

Because Open Cup games are oftentimes decided by penalty kicks, Vitiello makes sure to do his homework. He checked out many Sporting KC players' spot-kick tendencies on video.

The teams had battled to a scoreless draw through 120 minutes at Heart Health Park in Sacramento. The 6-2, 185lb. Vitiello had done his part by making three big saves in the extra-time period. 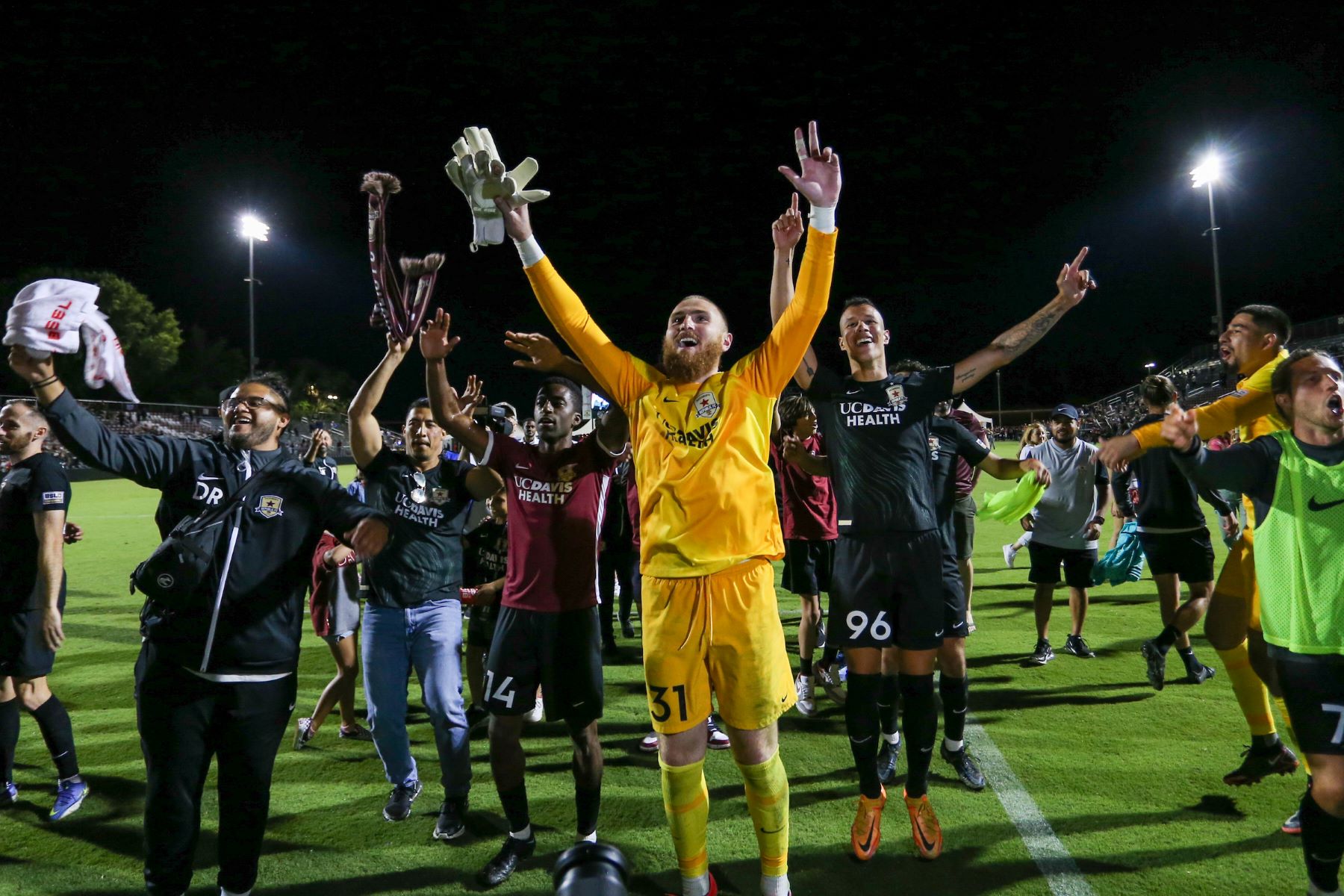 Vitiello and the Republic celebrate the home win in Sacramento

Each side converted their first four attempts. Maalique Foster then chipped SKC keeper John Pulskamp. "The crowd is kind of going wild at that time," Vitiello remembered.

Up stepped Zusi, a 35-year-old defender who brings plenty of experience to the penalty spot. He’s made 55 appearances for the U.S. Men's National Team and scored a goal during qualifying that denied Panama a spot at the 2014 World Cup in Brazil.

"He's probably the only guy that took a penalty that I didn't see on video," Vitiello admitted. “The first four I actually did see, but Graham Zusi wasn't one of them. I didn't really know which way he's going to go. Luckily, I chose the right side. It was my gut, that choice. I just went with it. He put it in a spot where my hands could get to. Maybe if it's a foot wider, he scores it. "

Full Confidence Between the Pipes

Vitiello's teammates had no doubt about their big man.

"We knew he would make a save," head coach Mark Briggs said. "That was his moment. That's what he was doing all week in practice. We had every confidence in him. When I spoke to the group just before the penalties started, our captain ‘RoRo’ [Rodrigo Lopez] said that Danny will save one. So, we all knew that he was going make a big save. He proved us right."

Vitello, however, wasn't about to celebrate. 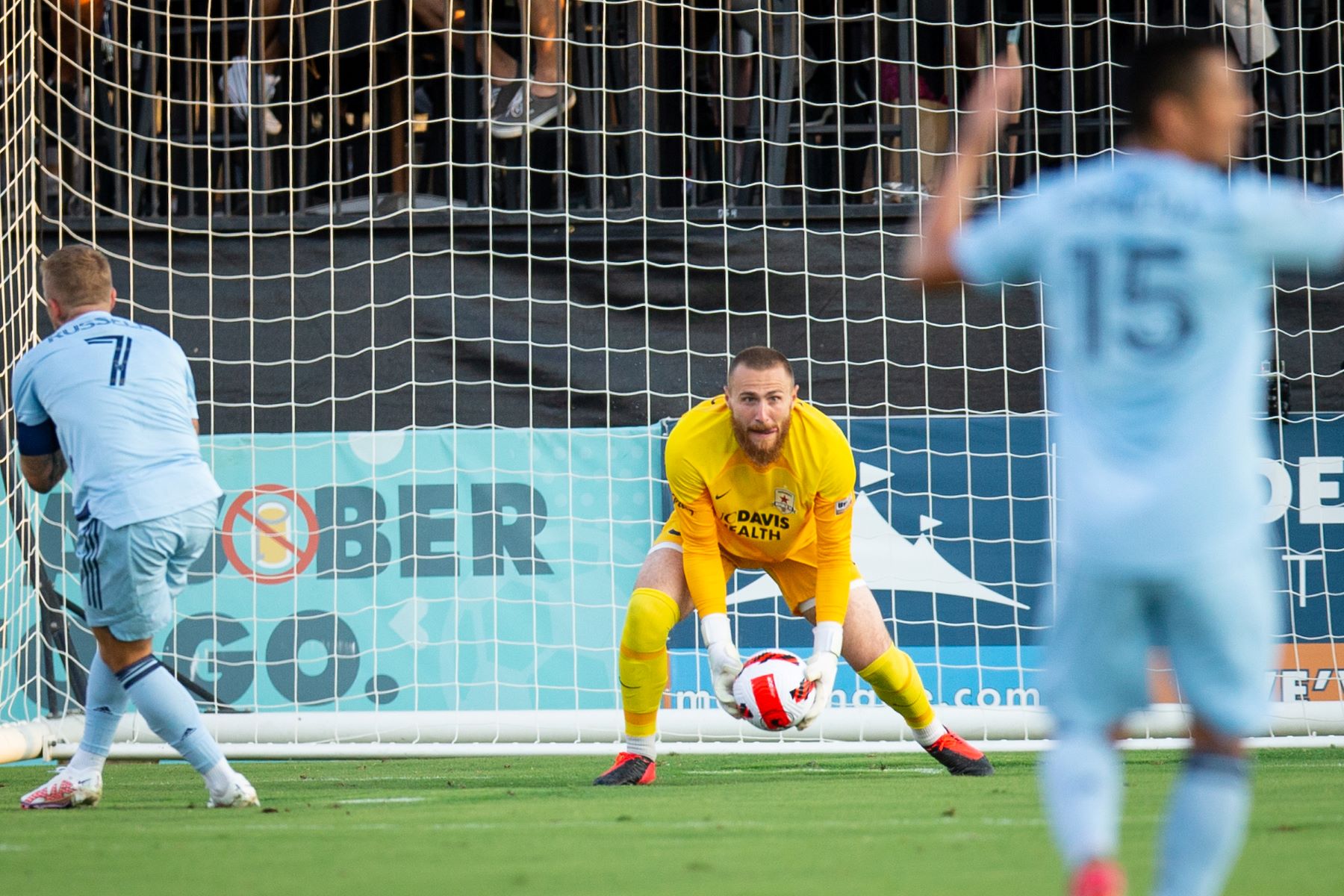 Vitiello - the picture of focus in Sacramento's Open Cup run

"My first thought was: 'Was I on the line?'" he remembered. "Three shots before I made that save they called it back, so I looked right at the ref, and he didn't say anything. I never try to get too ahead of myself and celebrate before we actually win anything. But in the back of my head, I knew that we had a guy stepping up who’s very clutch in those types of situations.

“RoRo put it away and after that, it's all history," Vitiello added.

The capacity crowd of 11,500 fans that packed Heart Health Park went crazy. So did the Republic’s players.

"The dogpile was amazing," Vitiello smiled. "I was happy, embracing my teammates. Just everyone screaming and yelling and throwing water at each other and then embracing the fans...doing our chants."

Vitiello's wife was with him on the field celebrating before the team enjoyed a well-deserved champagne shower in the locker room. "It was a great night. I don't think I've ever smiled and laughed that much," he said. "It was probably one of the best nights of my life so far."

Full Focus to the End

A field player needs only a few seconds of brilliance to become a hero. A goalkeeper needs to be focused for 90-plus minutes. Vitiello relishes that challenge.

"When the ball’s in the back of the net, obviously everyone is just going to drop their head a little bit, but the goalkeeper is the guy that needs to keep their heads in it," he said. "Get the ball, roll it to the halfway line and you start telling them you know, 'Let's go! We've got to step it up. You got to keep going. It's not the end of the world. We're still in the game.'"

A goalkeeper's most gratifying achievement is keeping a clean sheet. And Vitiello has six in league play and three in the Open Cup so far. 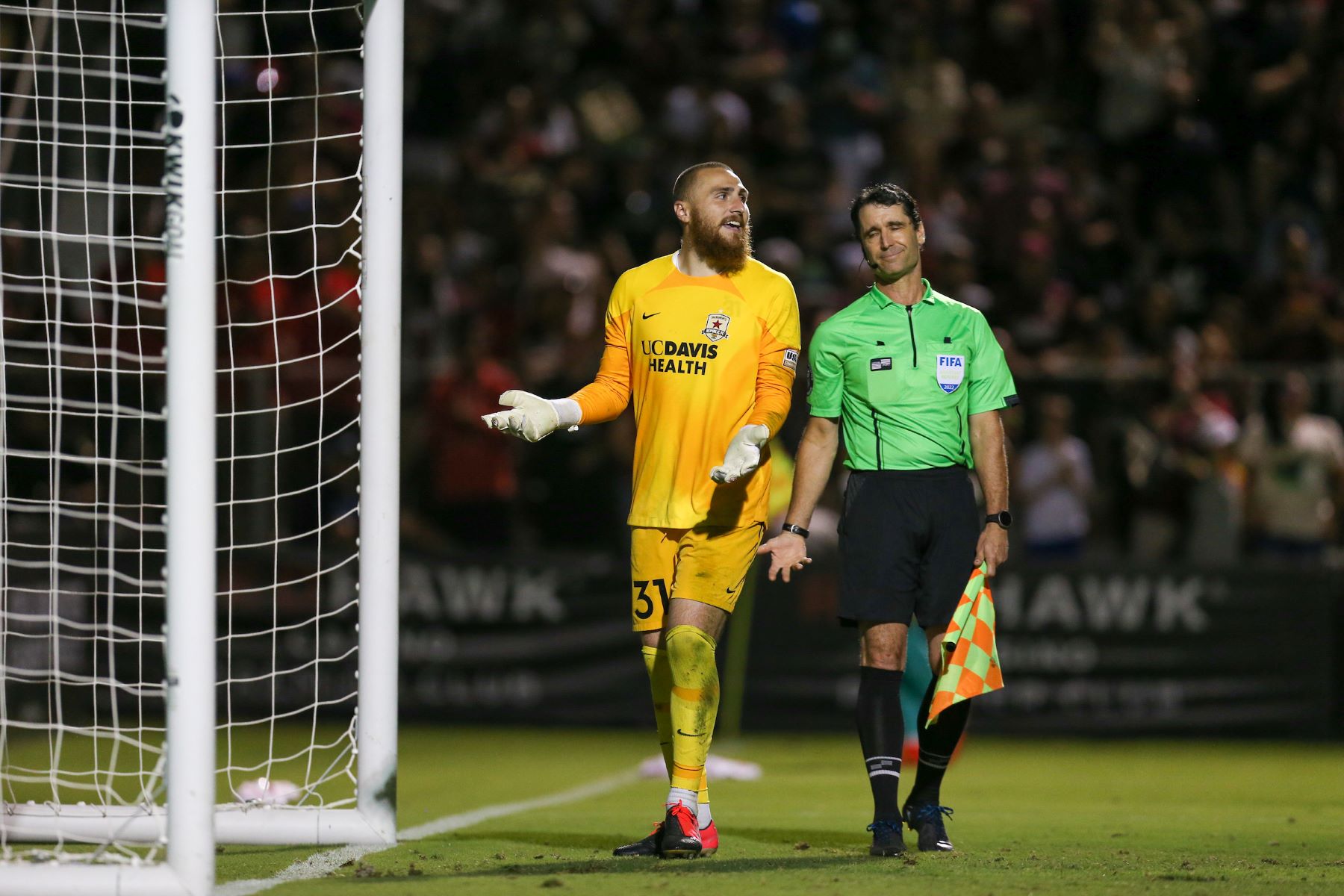 "Every time there's a zero, I go straight to my backline and say, ‘That was all because of you,’" he said. "You can make as many saves or make as many plays as possible. But those guys in front of you are making it 10 times easier."

"He's an experienced goalkeeper," coach Briggs said of Vitiello. "He's learned a lot from his time at various clubs. He hasn't made many mistakes. He's been extremely good, extremely positive. He's maintained a really high level."

One Game from History

The Republic are only one win away from making Open Cup history and becoming the first non-MLS side to win since the Rochester Ragin’ Rhinos accomplished the feat in 1999.

The squad have three MLS upsets under their belt, including wins over the LA Galaxy, San Jose Earthquakes, and of course, four-time Open Cup champs Sporting Kansas City.

Entering the weekend of August 19, the Republic (11-6-7, 40 points) are in fourth in the USL Championship’s Western Conference. The top seven teams qualify for the playoffs.

Before that is the small matter of the Open Cup Final. 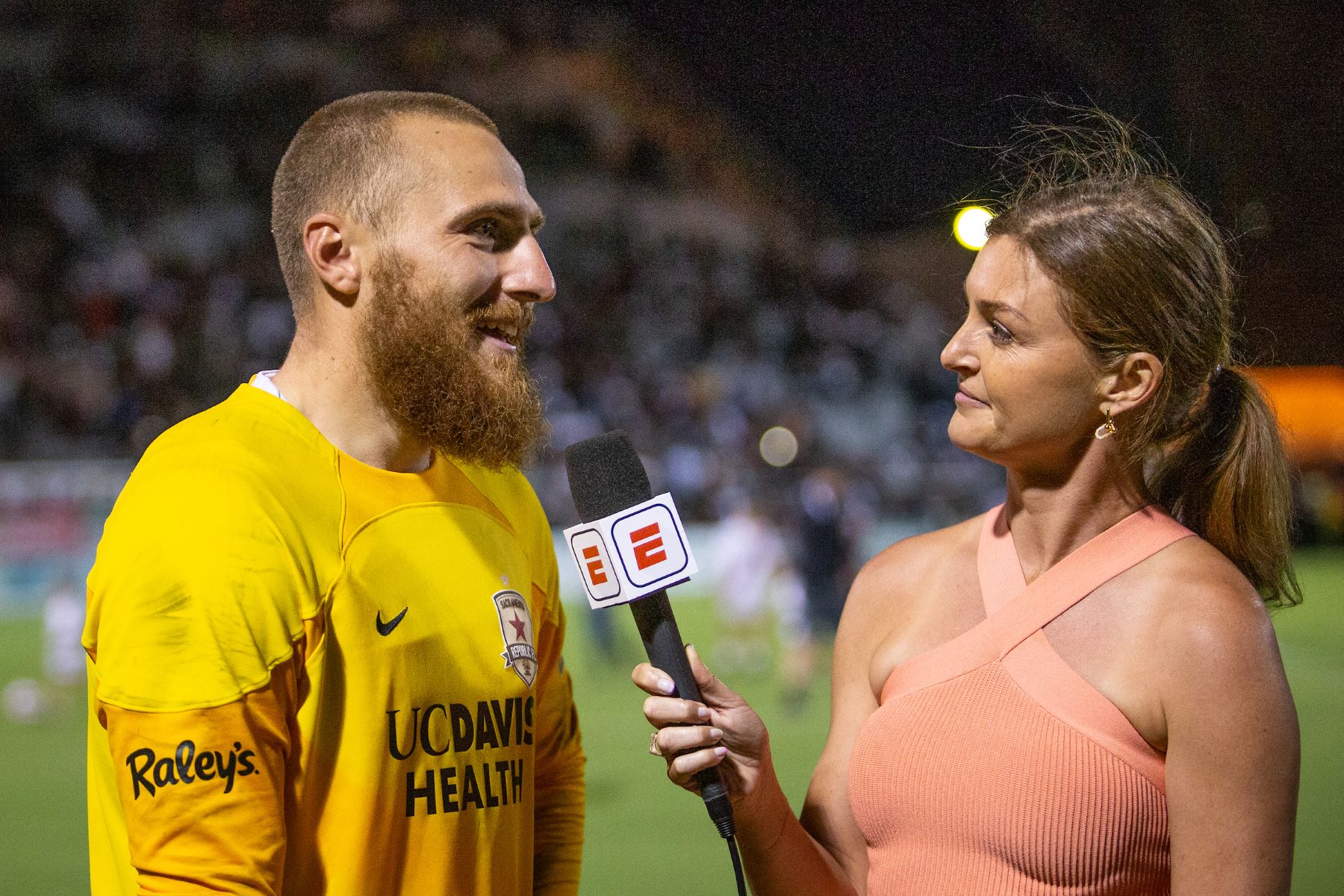 Vitiello is the Republic's humble hero

"We're going to be ready," said Vitiello, who grew up playing in soccer-mad Massapequa, N.Y and won a national high school championship alongside current New York Red Bulls Dylan and Sean Nealis. "We're going to watch the film. We're going watch each individual to see what they do best, and we're going to try and play our best. When that time comes, we'll embrace it. We'll accept the challenge."

A keeper on the rise, Vitiello, who captained the University of Albany Great Danes to a pair of NCAA second-round appearances, has gained experience with seven teams since 2016. That includes the Westchester Flames, Jersey Express and Long Island Rough Riders (in what is now USL League Two), Nashville SC, New Mexico United, Pittsburgh Riverhounds and Sacramento (USL Championship).

"Honestly, if I told myself five years ago that I'd be the situation that we're in now I would tell you that you're kind of crazy," he said. "Nashville and Pittsburgh were very great places to be. I learned a lot."

It seemed that MLS, the country’s top pro tier, was the next step.

No Ceiling for Humble Vitiello

"The sky's the limit," Briggs insisted about his No1. "We're extremely happy to have him. If you perform well consistently, then clubs take an interest. He has the potential and the ability. He can perform at the highest level with the performances he's putting in against various MLS teams in the Open Cup."

"I want to play at the highest level possible, no matter what it is," Vitiello said. "Whenever I'm playing, I make the most of it. Sacramento Republic, I don't take that for granted. I try and step on the field every day to be the best Danny Vitiello I can be, whether that's a 3v3 small-sided game or the Open Cup Final.

"I'm just blessed to be playing soccer for a living and being able meet different people and have 22 best friends every single season. It's been great. I wouldn't want it any other way," said the beating heart of Sacramento’s backline.

A U.S. Open Cup crown would top it all off for this keeper who started out, all those years ago, shedding tears in Massapequa.