Read the latest in our signature Great Eight Series where we take a light-hearted Round-by-Round look at some of the magic moments of America’s favorite soccer tournament.
Jonah FontelaDecember 21 2022
Open Cup

Fans of the 109-year-old Lamar Hunt U.S. Open Cup live by its magic moments. And the Final Qualifying Round for next year’s competition tossed up a fair few of those on December 17-18, 2022.

Join usopencup.com for a look back at eight moments of note from nine games in which 18 teams, pared down from an original 107, were evenly split between jubilation and despair. Six amateur clubs, including Capo FC and Chicago House AC, will make their debut in the Open Cup Proper in March.

9️⃣ through to the @opencup Proper | #USOC2023 😤 pic.twitter.com/6IAJFHTUmT

Goals Both Ways for Beaman

“You have to make it fun for the boys,” said 30-year-old midfielder Kwadwo Poku when asked about his Nashville-based Beaman United’s penchant for scoring – and conceding – so many goals. He’s come a long way from the day he was spotted as an amateur in this very same Open Cup. He climbed through the lower-league ranks and went all the way up to MLS, where he spent a season playing with Andrea Pirlo at New York City FC. “I know how much it takes, and how much effort and time is required, to organize a defense properly,” added Poku, who arrived in the Nashville area from Ghana in his late teens and met up with Beaman owner Gift Ndam – who he describes as “ a big brother.” The two had a plan, loose and somewhere in a vague future, to start a team together in the Tennessee city they both call home. And that time is now. And Beaman United, scorer of 11 goals – and conceder of 8 – in their three Qualifying games rode a mix of youth, experience – and just the plain old fun of it – into the Open Cup Proper. “It’s not about the money with us,” added Poku, an old pro enjoying every minute back among the amateurs. “So we keep the ball and play the game like it should be played.” 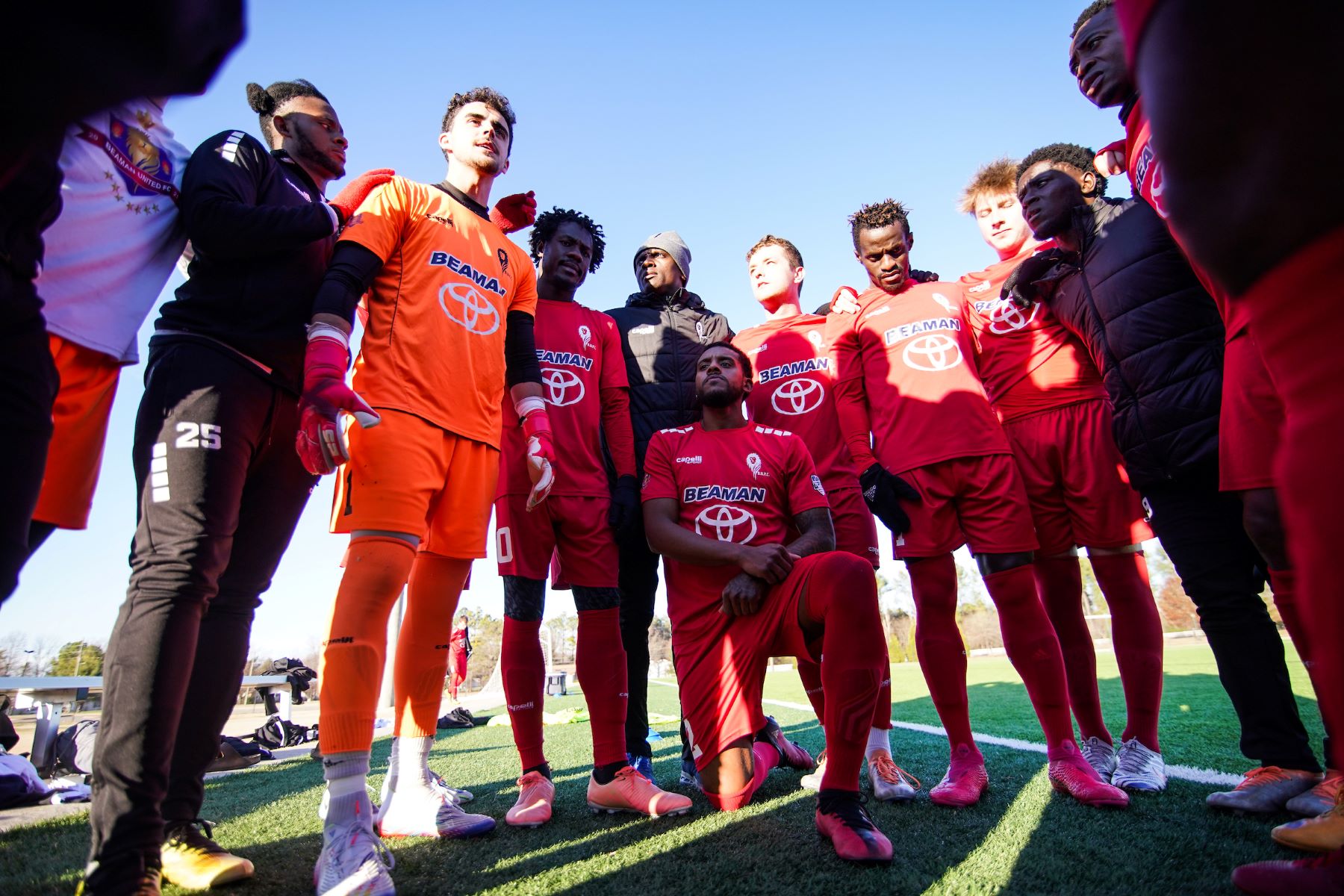 Road games are rough. Especially in the amateur ranks. Ask Chicago House AC, who had to board a plane for their Third Round Qualifier with Metro Louisville in Indiana – and did so again for their last game in the Boston area against Brockton FC United. “It’s not easy going out on the road every weekend,” said Chas Wilson, a 30-year-old striker and new father who works his days as a high school teacher in Pennsylvania – and still found the time to hop in the van for all four of West Chester United’s away Qualifiers. “But It’s the Open Cup, so we find a way.” Hosts Beaman United were generous enough to delay the kick-off of their Fourth Rounder with D’feeters Kicks SC as half the traveling team were still in the air between Dallas, Texas and Murfreesboro, Tennessee on a delayed flight. Inter San Francisco had to drive the whole width of California, up into the shadow of the high Sierras around Minden, Nevada. Maybe they used the inconvenience as motivation. It would explain their 5-1 win over local hopefuls Battleborn FC on a frozen pitch. Of the nine games played in the Final Qualifying Round, seven were won by the visitors. And we do salute all those who hit the road hunting a dream. 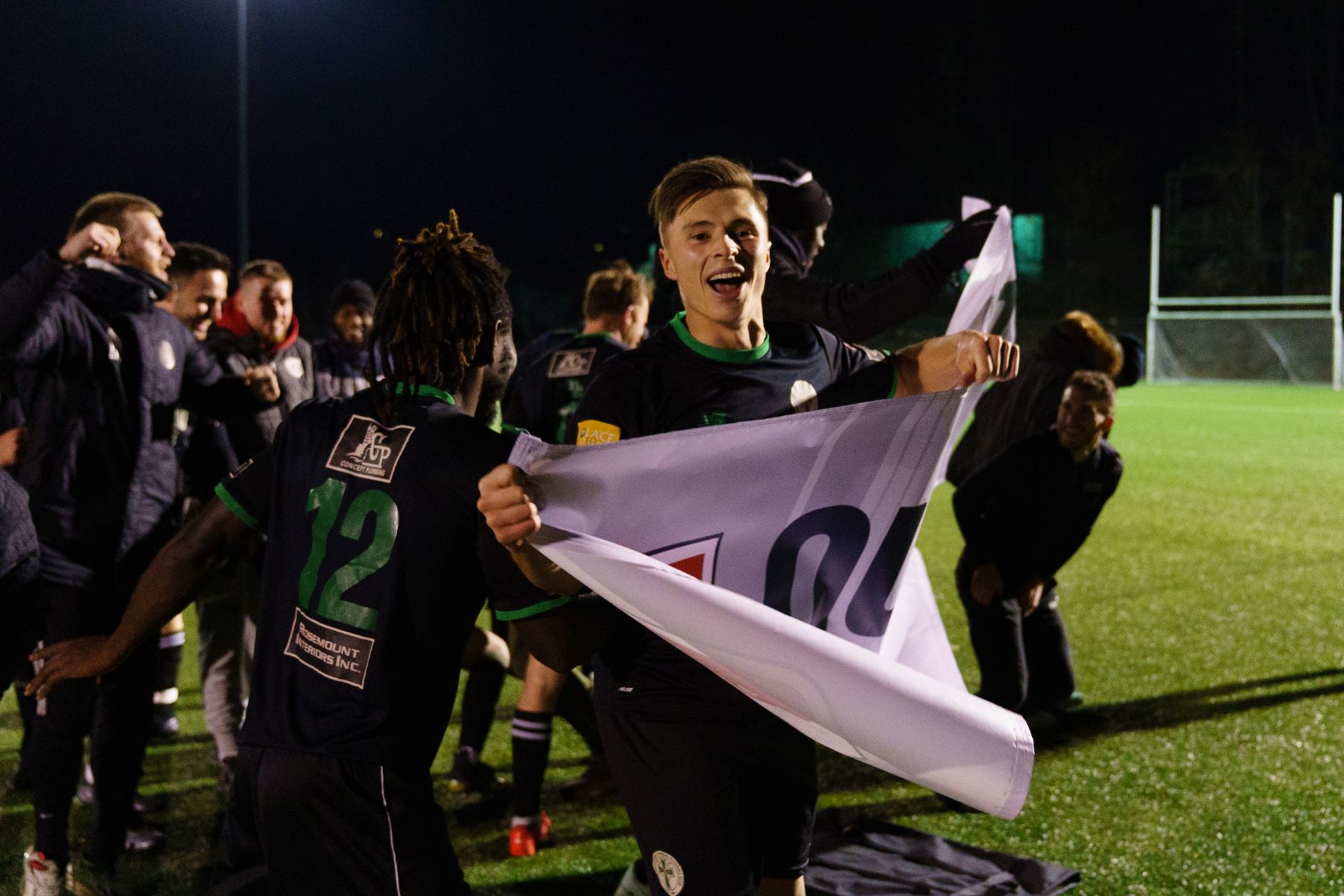 There was no pot of gold at the end of Chicago House’s 1000-mile trip to Randolph High School. Far from it. Brockton United are one of the top teams in Massachusetts and they gave the visitors all they could handle through 90 minutes. As the day faded away, and darkness descended, the field lights towered over proceedings, imperious and unmoved. Officials from the home team scrambled to find someone to flip the switch, to bathe the field in light so that extra-time – after a 1-1 draw through 90 minutes – could go ahead in full. But it soon became clear that the creeping darkness was just another factor of the day. Extra-time was shortened and a penalty shootout ensued through something approaching total darkness. Peter Wilt, Chicago House’s founder, and a brave band of traveling fans, could barely see who was shooting and where the ball was going. But we can confirm that, through a marathon nine rounds of kicks, House goalkeeper Tony Halterman scored one and saved two to send the Chicago men through.

@ChicagoHouse_AC is nothing without its fans 💚🧡 incredible number who traveled all the way to MA for our game #upthehouse pic.twitter.com/KVxViaZwTy

Heroes in the Net & Out

That wasn’t the only case of a goalkeeper scoring in the Qualifying Rounds. Henry Pleitez of Kalonji Pro-Profile, with his team down 4-3 and time ticking away on the Third Round, raced up for a free-kick. The ball came loose and he connected, hitting the back of the net and sending the home side into raptures. But the joy didn’t last. He ran out of heroics in the shootout and Beaman moved on to the Final Round. One of the three shootouts in the Final Round deserves special attention – following, as it did, one of the best games in the history of Open Cup Qualifying. UDA Soccer, out of Las Cruces, New Mexico, braved the altitude of Commerce City, Colorado and came back three times against Azteca FC to finish in a 4-4 tangle. UDA’s 19-year-old Mario Castillo proved the hero of the day, saving two penalties (three really, as one required a re-take) in the shootout. 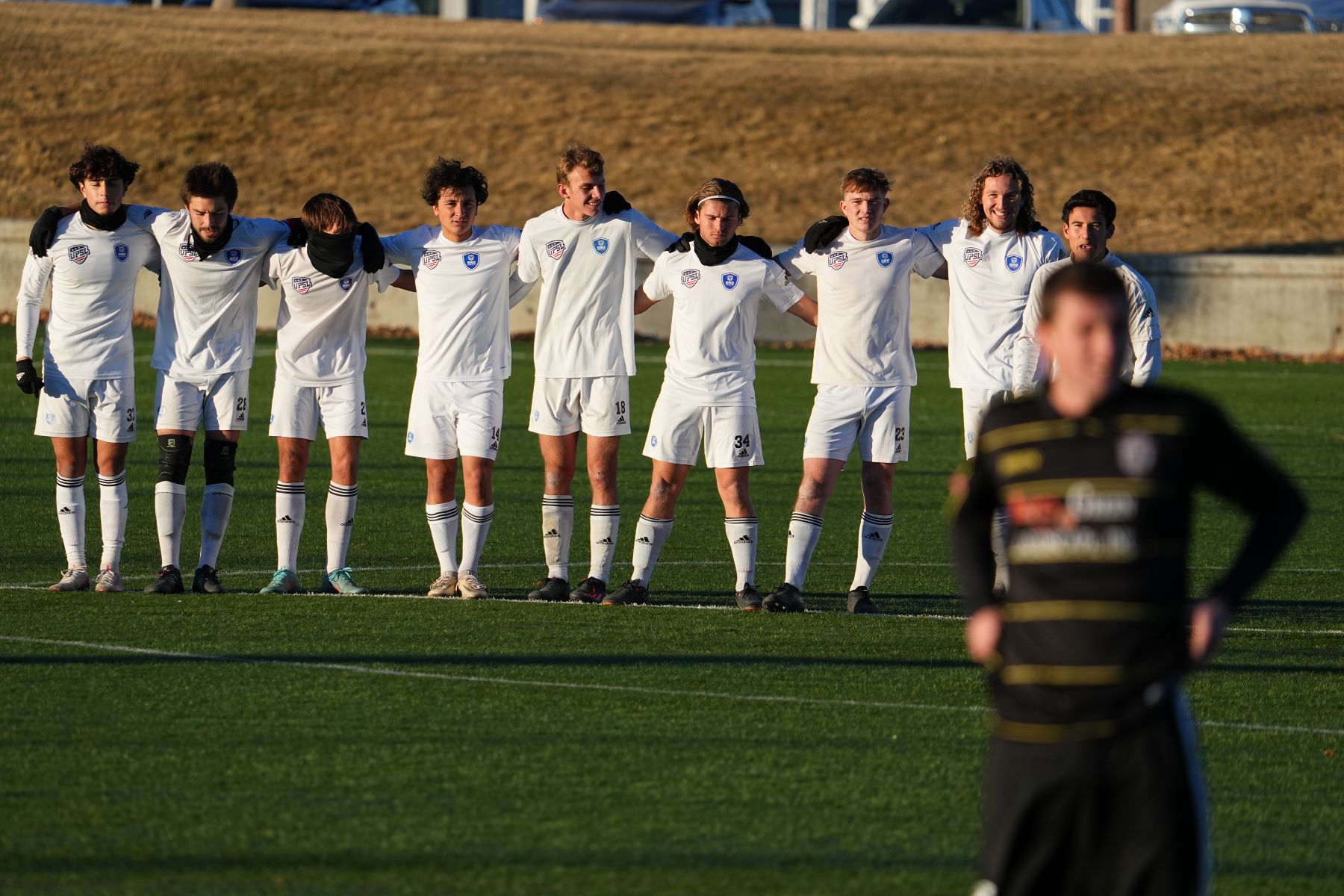 UDA Soccer of New Mexico through to the Open Cup Proper

The old campaigners didn’t have everything their own way in Qualifying. Only three of the nine teams who pushed through are returning to the Open Cup Proper. And three cheers for the returning regulars Miami United FC, West Chester United and the Bhoys of Lansdowne Yonkers. But the other six will make their debut on the big stage when the 2023 U.S. Open Cup kicks off in earnest. And we salute them all, from Chicago House to free-scoring Club de Lyon down in Florida – and the college kids over in Las Cruces, New Mexico of UDA Soccer. Capo FC, from Capistrano in California, knocked out defending UPSL national champions Orange County FC, who beat two USL Championship pro sides in the 2019 Open Cup. And of course, let’s not forget Inter San Francisco, also from the Golden State, who entered the Open Cup fray like a hurricane. They scored five goals in all but one of their four Qualifying games. That’s  all the more impressive considering Dr. Amir Darabi only founded the club a year and a half ago. And what’s more impressive than that? The fact that his Inter aren’t the youngest club of the nine 2023 Qualifiers. That distinction goes to Beaman United, who count their history in months rather than years. 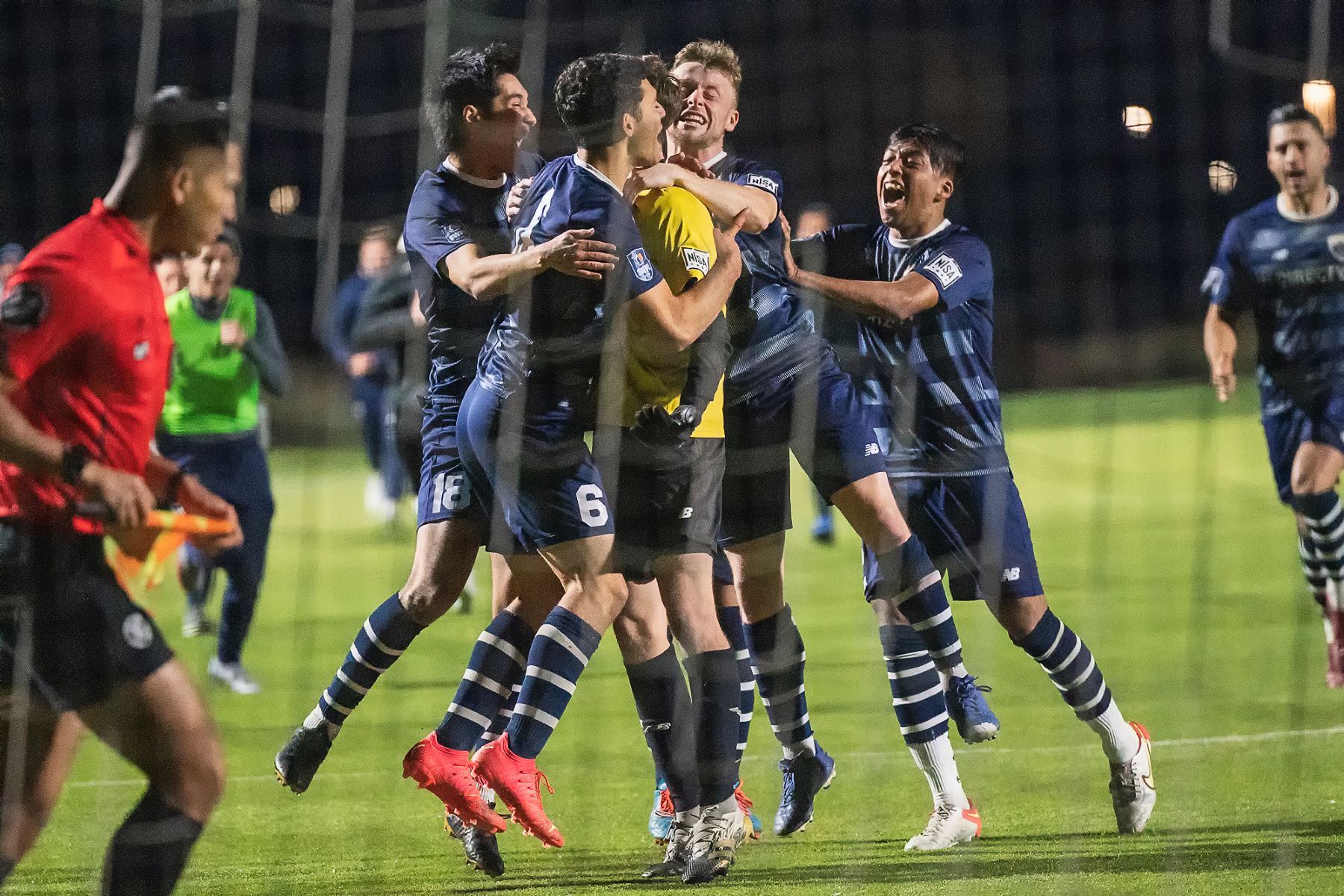 While not the youngest club out on the fields of 2023 Open Cup Qualifying, Inter San Francisco were one of the best. With a fine combination of ex-pros and young strivers, the team – founded on the principle of one for all and all for one – rolled with the punches through a Qualifying saga that saw them score 19 goals and concede just once. Starting striker Tyler Wall locked his keys in the car near kickoff out in Nevada, delaying his arrival to the pitch at Douglas High School. But no one panicked. Not even close. Coach Darabi simply looked down the bench and raised his head to former St Mary’s College forward Javier Rivera. And the next man up, an engineer by trade, didn’t miss a beat. He scored one and assisted another in the 5-1 rout. “It’s just meant to be,'' said a proud Darabi, who’s seen his club grow from the seeds of a long-shot pick-up game to one of the top amateur sides in the country. 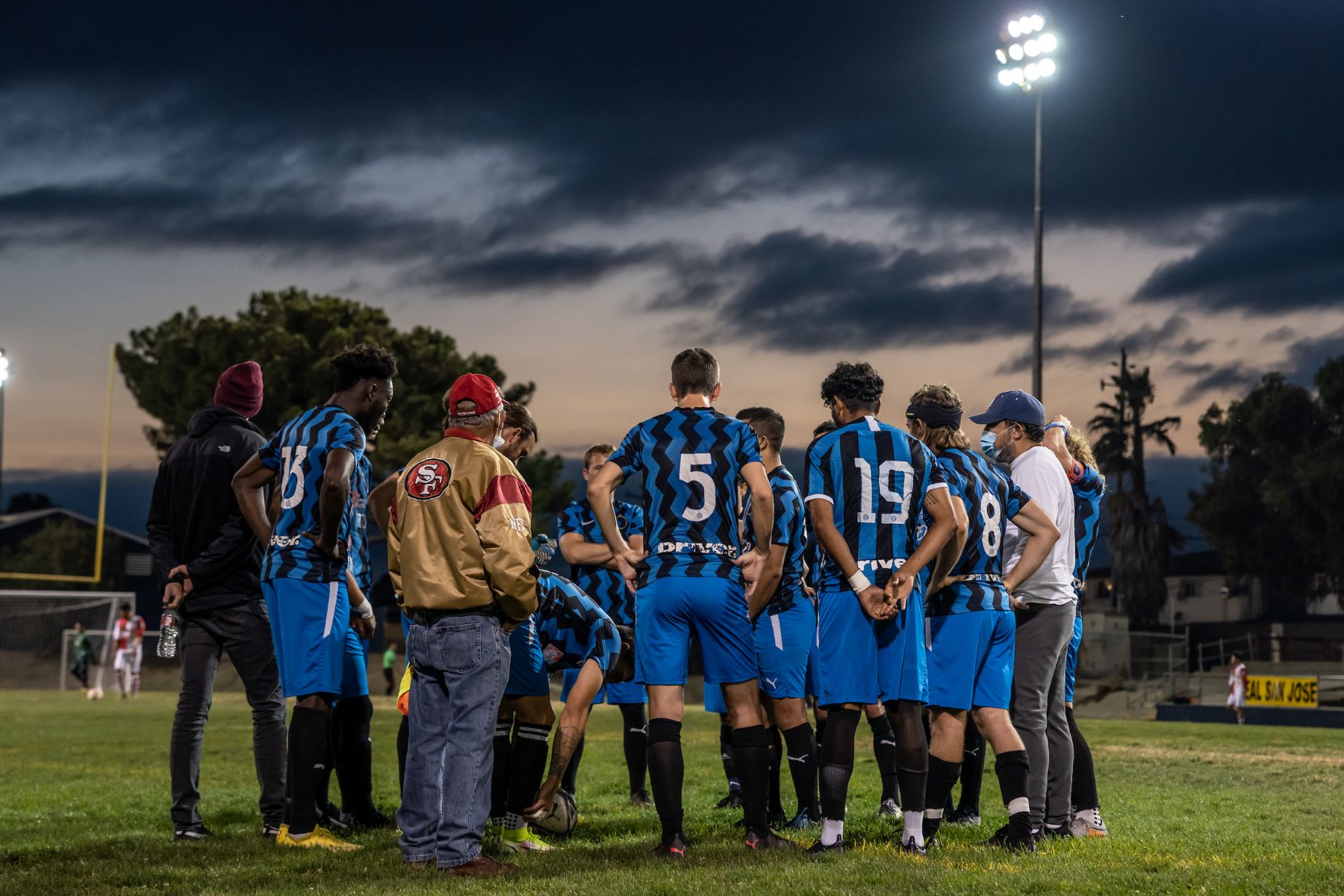 Stats aren’t our bag here at the Open Cup. We like to fiddle more with the intangibles – the essence of things. But we’ll go ahead and consider a few numbers of value for the sake of clarity. A full 107 teams began the Qualifying process, from all over the country. Four Rounds were contested and 429 goals scored – that’s an average of more than four goals per game. Eleven games went to extra-time and penalties and, to their eternal shame (you know who you are) four games ended the 120 minutes of regular and extra time tangled in a goalless draw. Now nine Qualifiers – teams who took the hardest and longest road to the promised land – join National Amateur Cup winners the Milwaukee Bavarians in the First Round of the Open Cup Proper where, numbers be damned, anything is possible.

The Final Qualifying Round had it all 🤯

This is always the hard part. Saying goodbye to those teams who’ve done so much to raise the profile of our Cup – and to lift the spirits of underdogs everywhere. It’s the same in the Qualifying Rounds as in the Open Cup Proper – and it’s fitting we make mention of those who came so close. Brockton FC United, oh how you grew from a high school team to become one of Massachusetts' best. We’ll surely see you again soon. As we will, NoVA FC, D’Feeters Kicks SC, Orange County FC and Azteca – so often regulars at our Open Cup party. Well done to BattleBorn FC, Naples City and South Carolina Heat, where youngsters keep their pro dreams alive for a little while longer at least. And an extra special and hearty Na Zdrowie! to SC Vistula Garfield of New Jersey, flying the flag for the ethnic clubs of old. We raise a glass to you, your 70-year history and, hopefully, a long future ahead.