With nearly 700 official matches in the books since the U.S. Men’s National Team first started playing in 1916, the MNT has loads of history against a variety of opponents.

Ahead of USA-Paraguay on March 27, here are three noteworthy tidbits from the MNT’s six previous matches with La Albirroja.

The U.S. was one of 13 nations to participate in the inaugural 1930 FIFA World Cup held in Uruguay. The choice of a South American venue for the first competition irked many of the invited European nations, causing all but four to boycott, and while the U.S. wasn’t considered a world power in the game, many gave them a decent chance of advancing from a group that also featured Belgium and Paraguay.

Having led his hometown Fall River Marksmen to the National Challenge Cup (now Lamar Hunt U.S. Open Cup) title earlier that year, prolific striker Bert Patenaude headlined a squad made up of the best players from the American Soccer League. The 20-year-old made his mark early in the tournament, putting the exclamation point on a 3-0 win against Belgium on July 13. However, his most historic game would follow four days later. With a spot in the World Cup Semifinal on the line, Patenaude (pictured first row, center) ran rampant when the USA took on 1929 Copa America runners-up Paraguay, tallying for Robert Millar’s side in the 10th, 15th and 50th minutes of an impressive 3-0 win. In his own mind, as well as that of his teammates, Patenaude thought he had registered the first World Cup hat trick that day, but official records showed otherwise – specifically FIFA’s match report credited teammate Tom Florie with the second goal, while other records showed it as a Paraguay own goal.

Two days later, eventual tournament Golden Boot winner Guillermo Stabile recorded a hat trick of his own in Argentina’s 6-3 win against Mexico, but throughout the years, the belief among the U.S. delegation present in Montevideo remained that Patenaude had done it first.

Patenaude passed away in 1974, but thanks to some expert sleuthing by soccer historian Colin Jose, FIFA revisited the matter. Eventually in 2006, the world governing body officially revised its records, awarding Patenaude the 15th minute goal and posthumously acknowledging the U.S. striker as the first player to score a hat trick at the FIFA World Cup.

A Final Bow for Kasey Keller

Looking to gain more competitive games against quality opposition, the U.S. accepted an invite to Copa America 2007 in Venezuela. While the extra games were welcome, the schedule of the tournament – kicking off just four days after the USA’s victorious run at the CONCACAF Gold Cup – necessitated then MNT head coach Bob Bradley to shuffle his roster between the two competitions. The idea of keeping players away from their clubs for two months straight, not to mention deny European-based players any vacation, made Bradley’s job that much more challenging.

One of the few players available to take part in both was goalkeeper Kasey Keller. Having just earned his 100th cap during the Gold Cup, the long-time MNT netminder was between clubs at the time, and by a rather large margin also the most experienced player on an otherwise inexperienced roster – Ben Olsen had the second-highest cap total with 34. 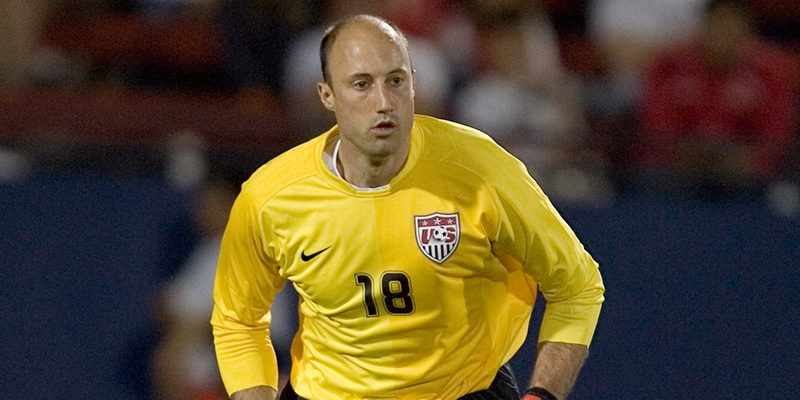 Keller bravely backstopped the U.S. in its tournament opening loss to Lionel Messi and Argentina, before Bradley called on him again in the second match against Paraguay. Keller made five saves and the young U.S. team in front of him put in an improved performance, but the MNT ultimately fell 3-1 to La Albirroja.

With the U.S. effectively eliminated following the two losses, Bradley opted to give backup goalkeeper Brad Guzan the final group match against Colombia, making the Paraguay match Keller’s 102nd and final appearance for the MNT.

Mixed results in the MNT’s first two matches of the historic 2016 Copa America Centenario meant the side needed a win its group finale against Paraguay in Philadelphia to guarantee advancement.

The U.S. nearly went down 11 minutes in when three Paraguay attackers sprung in transition with only center back John Brooks left in front of Brad Guzan. The defender’s 6-4 frame aided him well in tracking back, allowing him to ably keep his body between the ball and the U.S. goal before turning and sliding in to deny Miguel Almiron a point-blank shot. After surviving that scare, the U.S. went ahead in the 27th minute when Gyasi Zardes’ centering pass from the left picked out Clint Dempsey, who first-timed his 51st international goal past ‘keeper Justo Villar.

While the U.S. took a 1-0 lead in the break, their fortunes would change just after the start of the second half when DeAndre Yedlin was shown two yellow cards in the span of about 90 seconds. Playing a man down for the final 42 minutes, the MNT came together as a unit to frustrate the South American side before needing Brad Guzan to come up with a point-blank, double-save first on Jorge Benitez and then Almiron’s follow up.

The U.S. grinded out the 1-0 victory, and combined with Costa Rica’s 3-2 defeat of Colombia finished on top of the group!