Fanendo Adi is shaking off injury and off-field woes with FC Cincinnati – and he’s eager to keep that goal-scoring feeling going in the 2019 Open Cup.
Jonah FontelaJune 17 2019
Open Cup

It was a legal challenge, shoulder to shoulder, but there was desperation in it. The Nigerian, once the toast of Major League Soccer’s natural goal-getters, hadn’t scored for FC Cincinnati all year. And when he finally got a sniff – when the Louisville City defender dallied a second too long on the ball in his own box in the 2019 U.S. Open Cup Fourth Rounder – the striker smelled blood in the water. 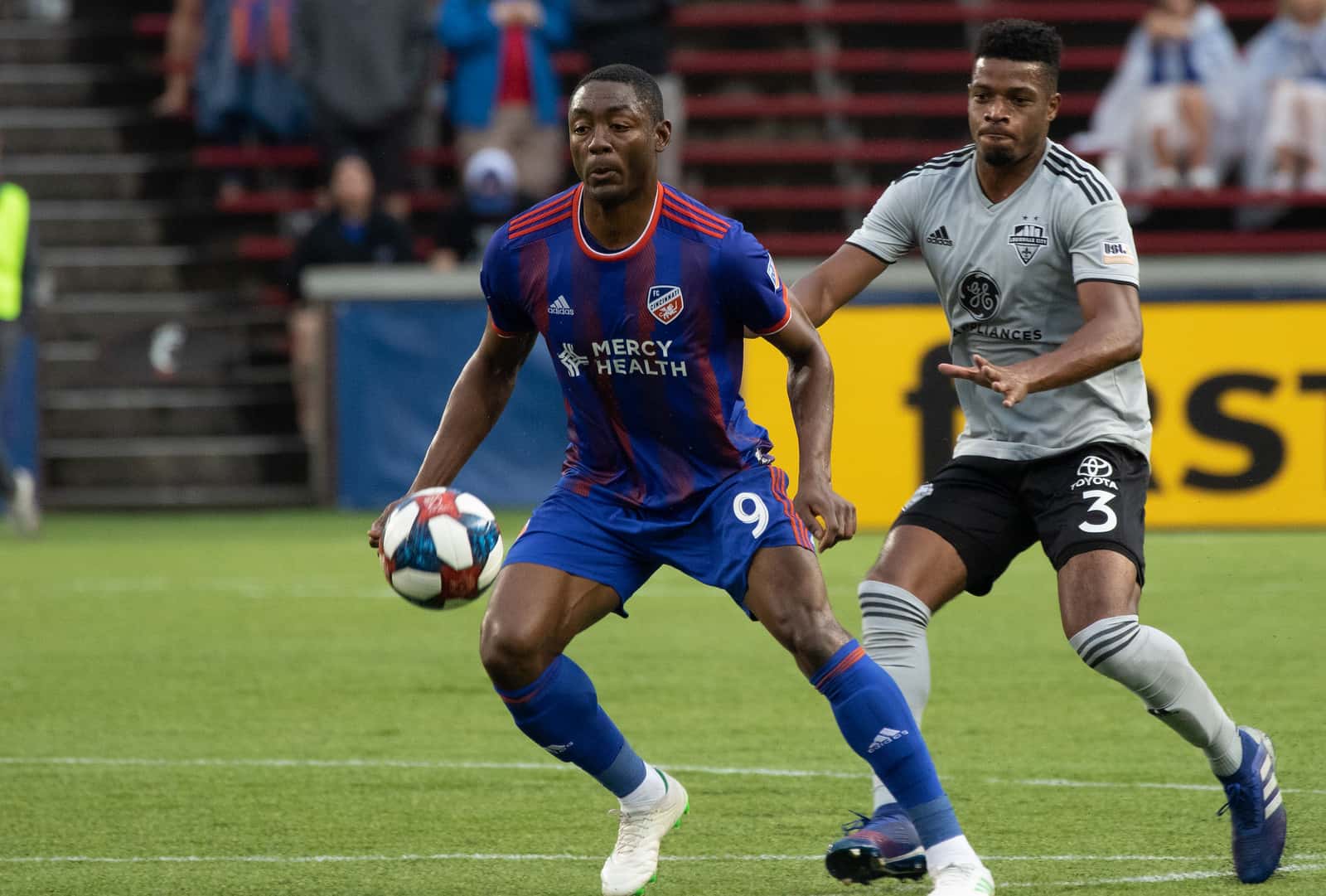 “It’s my job to score goals,” Adi told ussoccer.com during his glory days back in Portland, where he scored a then club record 54 goals in just over four seasons.  “You want to have the feeling of being in a team and doing what you’re there to do.”

It was his first goal for his new club in a season plagued by injury and off-the-field complications. The look on his face when the ball slipped under goalkeeper Chris Hubbard was one of pure relief for a striker struggling to find the most elusive commodity in the game – that goal-scoring touch. Adi didn’t celebrate, but he was mobbed by his teammates who know the value of their big striker when he’s firing on all cylinders.

It wasn’t long ago that Adi couldn’t stop scoring. With the Portland Timbers, in their fateful run to an MLS title in 2015, everything the Nigerian touched turned to goals. He was 25 years old, at the peak of his powers, lifting a trophy in a new country and adored by those Northwest fans who don’t hesitate (or skimp) honoring their heroes. Adi, blessed with electrifying speed and strong on the ball, scored no fewer than 16 times for the Timbers in 2015, including a pair in the playoffs. His corner of the locker room was littered with Timber Joey’s log-slices, cut fresh with a roaring chainsaw after every Timbers goal he scored. Adi kept them in a pile as a reminder of why he was there. 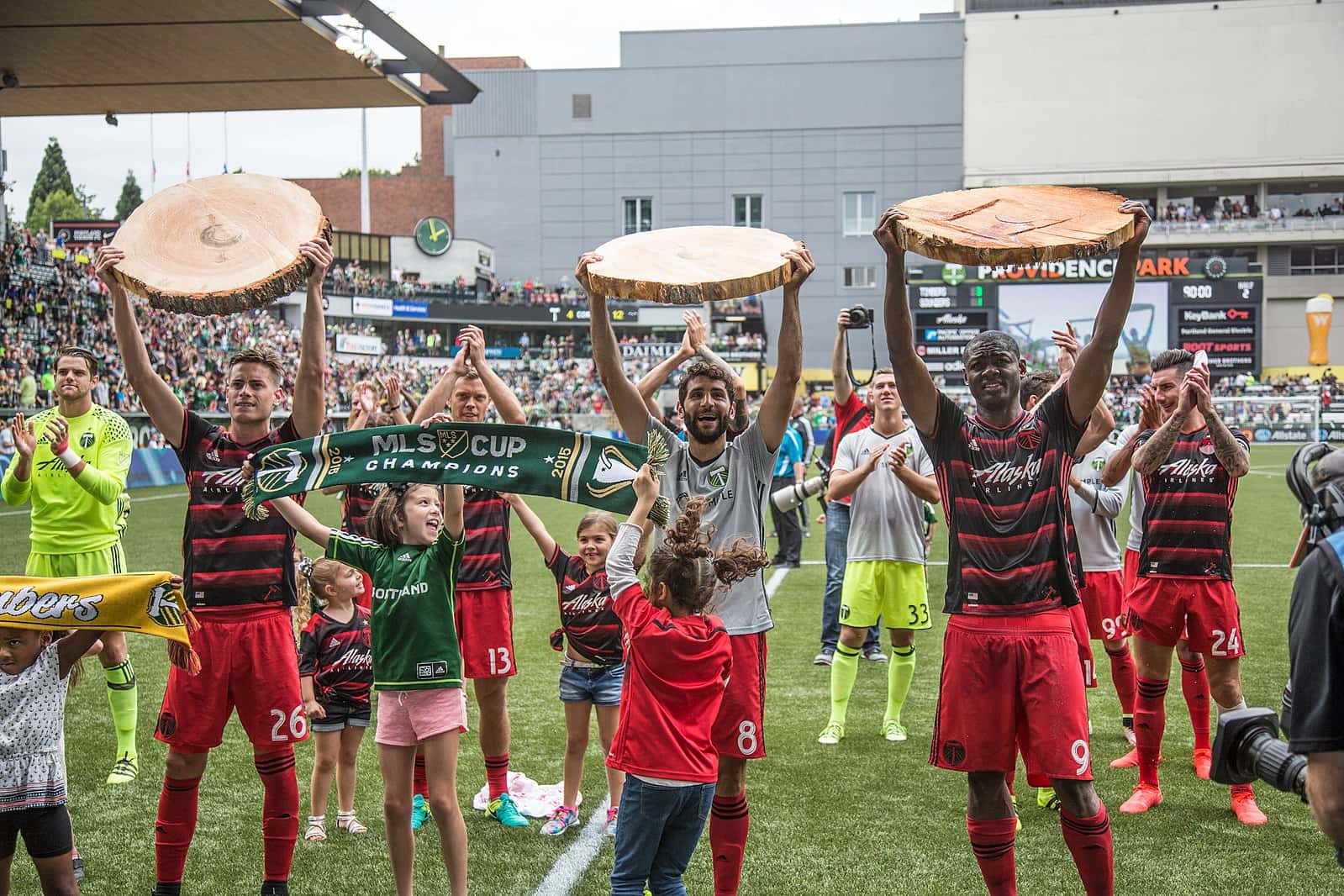 Adi holds up one of his log slices in Portland

But that was then. This is now.

Adi arrived in Ohio in exchange for $1,000,000 in allocation money. He was the first Designated Player in FC Cincinnati’s short MLS history and his salary is huge. There was no confusion about why the free-scoring forward was coming to Ohio. To score goals. He failed to score in three starts, before injuring his ankle in FC Cincy’s home opener against his old club, the Portland Timbers. Subbed off at the half of that game, the injury proved worse than expected and was compounded by a traffic stop by the Ohio Highway Patrol which clocked Adi going over 100 MPH, under the influence, and without a valid driver’s license. As per MLS’s drug and alcohol policy, the striker had to stay away from the game for several weeks and missed three league games. Now back, and finally fully recovered from his ankle injury, it’s time for Adi to get back to business.

When things go wrong in real life, players can find solace on the field. It’s a feeling Adi’s familiar with. Born and raised in Benue State, a remote area of Central Nigeria, he didn’t have much growing up. “It’s not like Lagos there,” said the striker, who was raised by his mother and his grandmother. “It’s a whole different story where I was a kid. I grew up playing in the streets. My Mother would send me on errands and I would just run off and go play football. I got in big trouble for that.”

Those loose and long-ago games in the roadside dust are a far cry from Major League Soccer. “We had no shoes. Think of that. We didn’t even have a ball,” said Adi, whose first pair of boots came from America – were not made for soccer – and had sharp metal spikes. “We bundled up a bunch of socks and tied it all together with a rope and this is what we used as a ball. This is how it all started.” 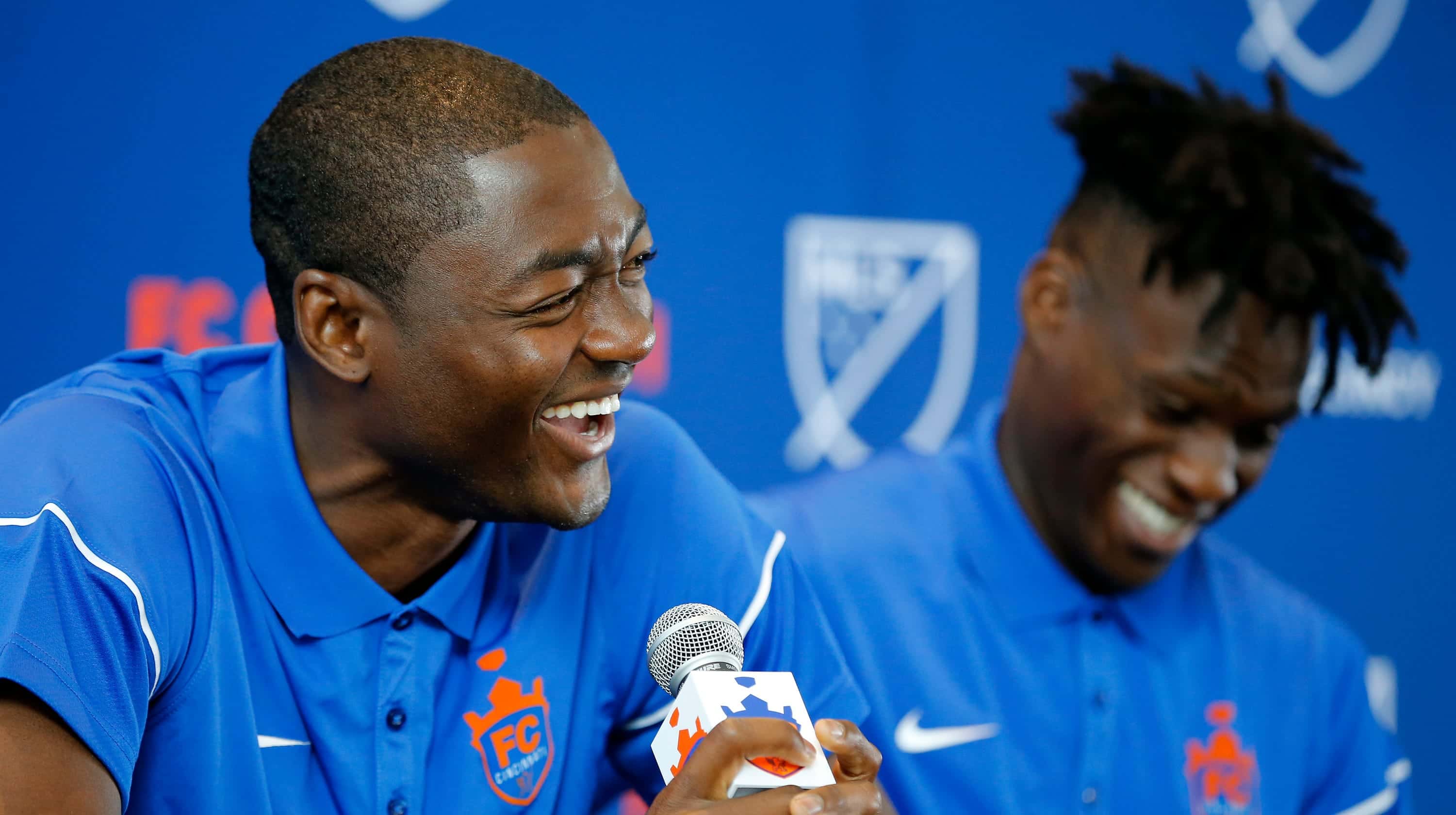 Adi’s talent got noticed. It was lift-off time and he ended up at FC Copenhagen after finding goals in Ukraine and Slovakia and eventually to a title-winning season in Portland. “I’m very luck to be where I am right now,” he said, knowing precisely where he came from. “I love playing football. All-around I just love the game. Scoring goals, sure, that’s a good feeling. But being in a team and winning as a team is the best feeling.”

So far in 2019, wins have been almost as rare in Cincinnati as Adi goals. The side, which reached the Open Cup Semifinals in 2017 when still a part of the USL’s Division II league, are dead-last in MLS’ Eastern Conference table, with only three wins from 16 games. Without Adi for a full seven weeks, FC Cincy scored only 14 goals – worst in MLS.

It’s a long way from Portland in 2015, but there’s hope. In the Open Cup, as long as you’re alive, there’s always hope. Adi’s goal last week in the Fourth Round win over former USL rivals Louisville City may just be a turning-point for player and club both. It’s unlikely FC Cincinnati will win MLS Cup this year or even reach the playoffs – or that Adi will end up top-scorer like he did in 2015 – but the Ohio side are three wins from an Open Cup Final. And they’re four from a first-ever trophy as a top-flight club. 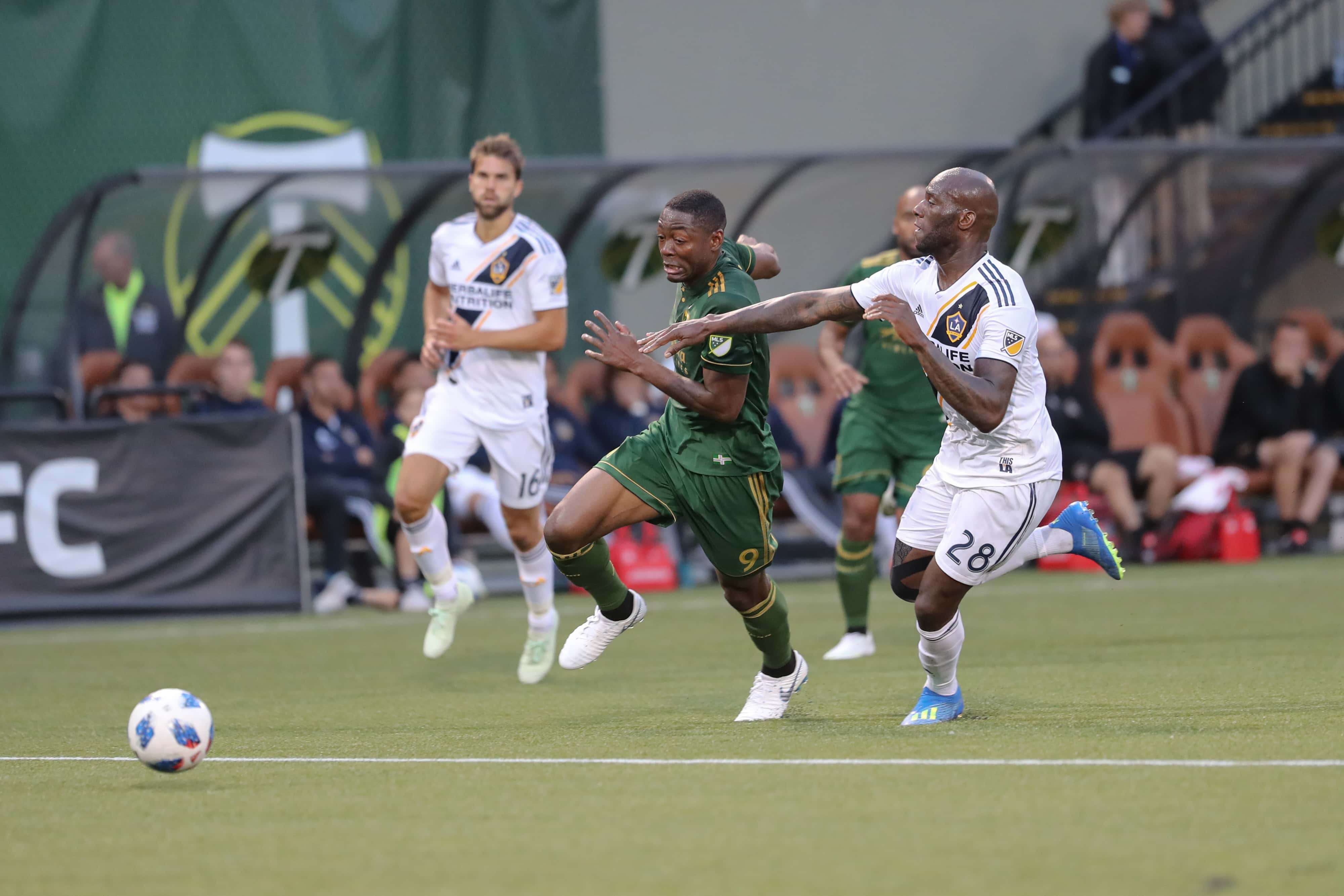 “My resolve is to try to get goals and get myself going for the season,” Adi said recently, after playing his first full 90 minutes (a loss to the New York Red Bulls) in which he created chances and was a ceaseless pest in a thankless lone-attacking role. Belgian Roland Lamah was impressed with his teammate on that day: “Everybody knows Fanendo Adi is a good striker. He helps us. He creates a lot of chances. I think he’s a good thing for us.”

Adi is on his way back up. There’s only one way to go from the kind of start he’s had to 2019. It’s been a challenging season so far – on and off the field. But this is a player who’s known ups and downs before. Heading into the Open Cup’s Round of 16, and with a trophy in touching distance, you wouldn’t want to bet against the big man getting back among the goals in a big way.