Serious Business: #USOC2019 Round of 16 Preview

With a bracket now set leading to the Promised Land of the Final, the rubber meets the road in the 2019 Lamar Hunt U.S. Open Cup’s Round of 16. There will be no more experiments, many of the underdogs have been sent packing by the big boys and the tension will be ratcheted up with a place in the Quarterfinals on the line. Eight games make up the round to be played between Tuesday, June 18 and Thursday, June 20. Hearts will be broken, dreams realized and eight teams will stroll or suffer through to fight another day.

New Mexico United, the first-year USL Championship club, aim to keep up their road-warrior ways in what has been a remarkable inaugural year. In Open Cup play so far, the side – led by former Real Salt Lake striker and native son Devon Sandoval – beat Phoenix Rising (USL Championship), Colorado Springs Switchbacks (USL Championship) and, amazingly in last week’s Fourth Rounder, the Colorado Rapids of Major League Soccer (MLS) after a late Kevaughn Frater Frater banger that sent the game to extra-time and eventually a penalty shootout. All three of the games were away from home.


These are heady days for the club that plays out of Isotopes Isotopes Field – a minor league baseball park in Albuquerque, New Mexico – and has set the second-tier soccer scene alight by drawing huge crowds – home and away – and playing a dazzling brand of soccer. “This is a great opportunity for this club,” said New Mexico United’s coach Troy Lesesne ahead of a Round of 16 date 650 miles south to take on 2016 Open Cup champions FC Dallas. “We’ll have our full focus on Wednesday and doing what we have to do to move on to the Quarterfinals.” [WATCH]

Saint Louis FC are the other remaining USL Championship underdogs in 2019 Open Cup play. The Missourians knocked Chicago Fire of MLS out last week in the Fourth Round with a gutsy performance on the campus of Lindenwood University – the goals in that 2-1 win coming from Austin Martz and Guy Abend.

Now, in the Round of 16, they welcome FC Cincinnati to their Worldwide Technology Soccer Park in Fenton, which was unavailable for last week’s game due to sudden and extensive flooding in the area. A sell-out crowd is expected and hopes are high that Saint Louis FC can pull a result against an FC Cincy team struggling in their first year in MLS and mired in the doldrums of last place in the Eastern Conference Standings. “It’s a great achievement what the boys have done so far, but now we have to do it again. It’s no use doing it once if we’re not going to go and keep at it said Saint Louis FC head coach Anthony Pulis. “I think we have what it takes to do it again against FC Cincinnati” [WATCH]

The remaining six games of the Round of 16 feature teams from Major League Soccer (MLS) in action across the USA.

Columbus Crew – 2002 Open Cup champions – welcome 2018 MLS toppers Atlanta United to their MAPFRE Stadium on Tuesday [WATCH]. At that same time, farther south, Houston Dynamo – the reigning Open Cup champions who had to hang on to beat Austin Bold in the previous round – open the doors of their BBVA Compass Stadium to Minnesota United, who hammered Peter Vermes and 2017 Open Cup champs Sporting Kansas City 4-1 in Saint Paul last week. This Round of 16 contest will be Houston’s seventh straight home game in the Cup. They played all five of their title-winning run last year at home and haven’t lined up in the Open Cup away since June of 2017 [WATCH]. 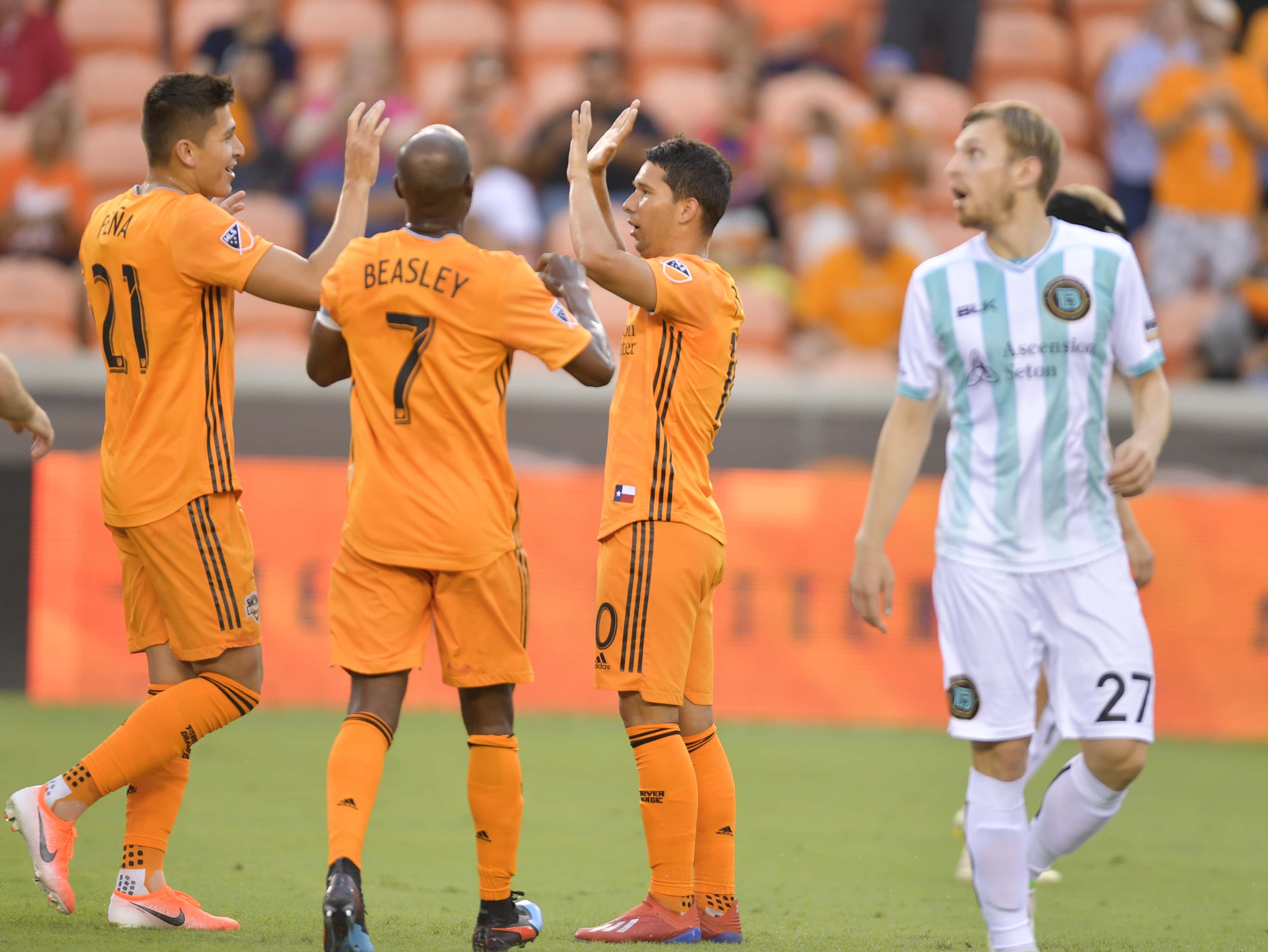 Holders Houston Dynamo are back at home…again

DC United needed a last-second Wayne Rooney penalty in extra-time to finish off 2018 runners-up Philadelphia Union last week. The reward for Ben Olsen’s capital club is another home game at their brand-new Audi Field, this time against a New York City FC side looking for a first-ever Open Cup run of any consequence after an impressive performance in a 4-0 win over North Carolina FC in Queens, N.Y. [WATCH].

Orlando City, and their Open Cup talisman Sacha Kljestan, host New England Revolution – a side trying to pull out of years of stagnancy under new coach and 1996 Open Cup winner Bruce Arena. Led by a late wonder goal from captain Teal Bunbury in the previous round to see off New York Red Bulls in New Jersey, the Revs are building momentum as they hunt for a first Open Cup trophy since 2007 [WATCH].

Fresh off of their impressive derby win over Seattle Sounders, Gio Savarese’s Portland Timbers line up at home against Los Angeles Galaxy [WATCH]. The men from SoCal were able to rest a number of starters in last week’s win over Orange County FC – the lone remaining amateur side in the tournament. Now they look to step up the tempo as they aim to add to the 2001 and 2005 Open Cup crowns.

The final game of the round is on Thursday June 20 in LA – at LAFC’s magnificent Banc of California Stadium in downtown LA. The ground that gave us so many memorable moments in last year’s Open Cup is set for action again as Bob Bradley’s LAFC (2018 Semifinalists) take on the San Jose Earthquakes who, despite their long history in the American soccer scene, are still looking for a first Open Cup title [WATCH].

It was a walk in the park in Utah for 2019 Semifinalists @LAFC as they move through the Round of 16 thanks a comprehensive 3-0 win over @realsaltlake. 💪#USOC2019 | 📺 Highlights pic.twitter.com/Xe0xnTauwS

“This is a tournament we’re taking incredibly seriously,” said LAFC boss Bradley – an incredibly serious man in his own right and twice an Open Cup winner with Chicago Fire in 1998 and 2000. “We’re going to really go after it.”

All games of the 2019 Lamar Hunt U.S. Open Cup are broadcast live on ESN+. ussoccer.com is the official website of the U.S. Open Cup providing comprehensive video and written coverage of the tournament. You can follow the Open Cup on Twitter and Instagram @OpenCup and Facebook @OfficialOpenCup.