The Lamar Hunt U.S. Open Cup is an unbroken thread that runs from the early 20th century to today. From the industrial leagues of the 1920s and 30s, to the ethnic flavor of the post-World War II era, and the dominance of MLS since the league’s birth in 1996, the Open Cup tells the confusing, chaotic and unlikely story of soccer’s success on American shores. Join usopencup.com for a look at the Cup from the good old days when there were laces on the ball, up to the gleaming professionalism we know now.

The first U.S. Open Cup was played in 1914, making it the oldest cup competition for soccer in the United States and the country’s oldest annual tournament for team sports. While professional soccer came and went in various forms and incarnations, at various stages of the 20th century, the Open Cup crowned a champion for each of the last 107 years. Even through the want and woe of the Great Depression and the challenges of two World Wars, the U.S. Open Cup survived. Teams from 17 different states have won this title that’s older than the Panama Canal, Mount Rushmore and the Super Bowl too. 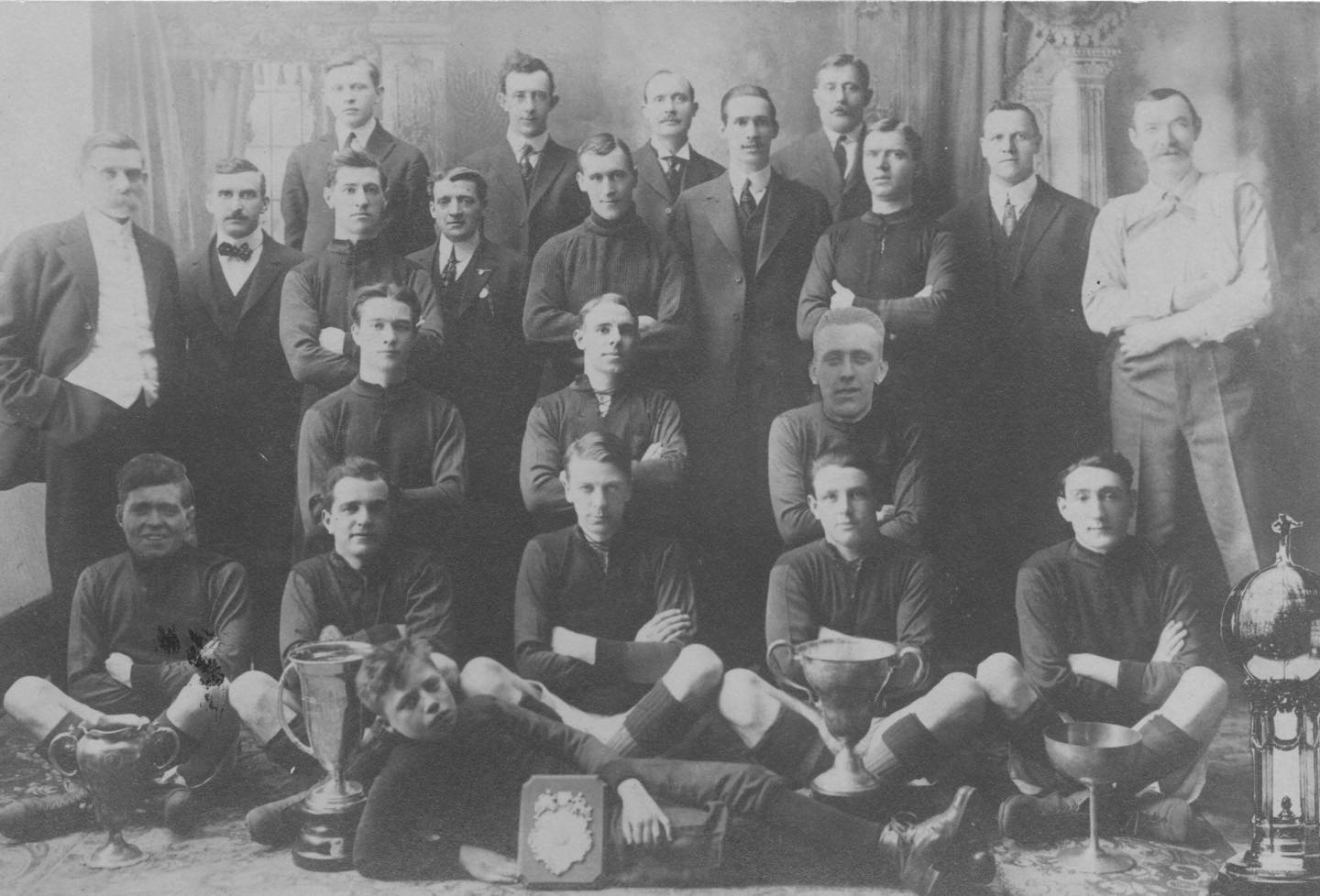 Brooklyn Field Club were the first winners of the Open Cup

The first final took place at Coates Field in Pawtucket, Rhode Island, contested by a pair of teams from the New York City borough of Brooklyn. Brooklyn Field Club edged Brooklyn Celtic 2-1. The price of admission on that crisp day in May was 25 cents. Celtic returned to the final the next year only to be beaten by powerhouses Bethlehem Steel, who hold the joint-record of most titles with five. In all, eight teams with Brooklyn in their name have won the Open Cup.

Once there were two

Only once in the long history of the U.S. Open Cup has a champion not been established on the pitch. That was in 1923, when FC Paterson became the first team from New Jersey to win the title. Scullin Steel of St. Louis were unable to field a side for a replay after the initial Final finished tangled at 2-2. In what might be the most American of soccer problems, Scullin claimed they couldn’t play again because many of the young men in their side were making preparations for the upcoming professional baseball season. 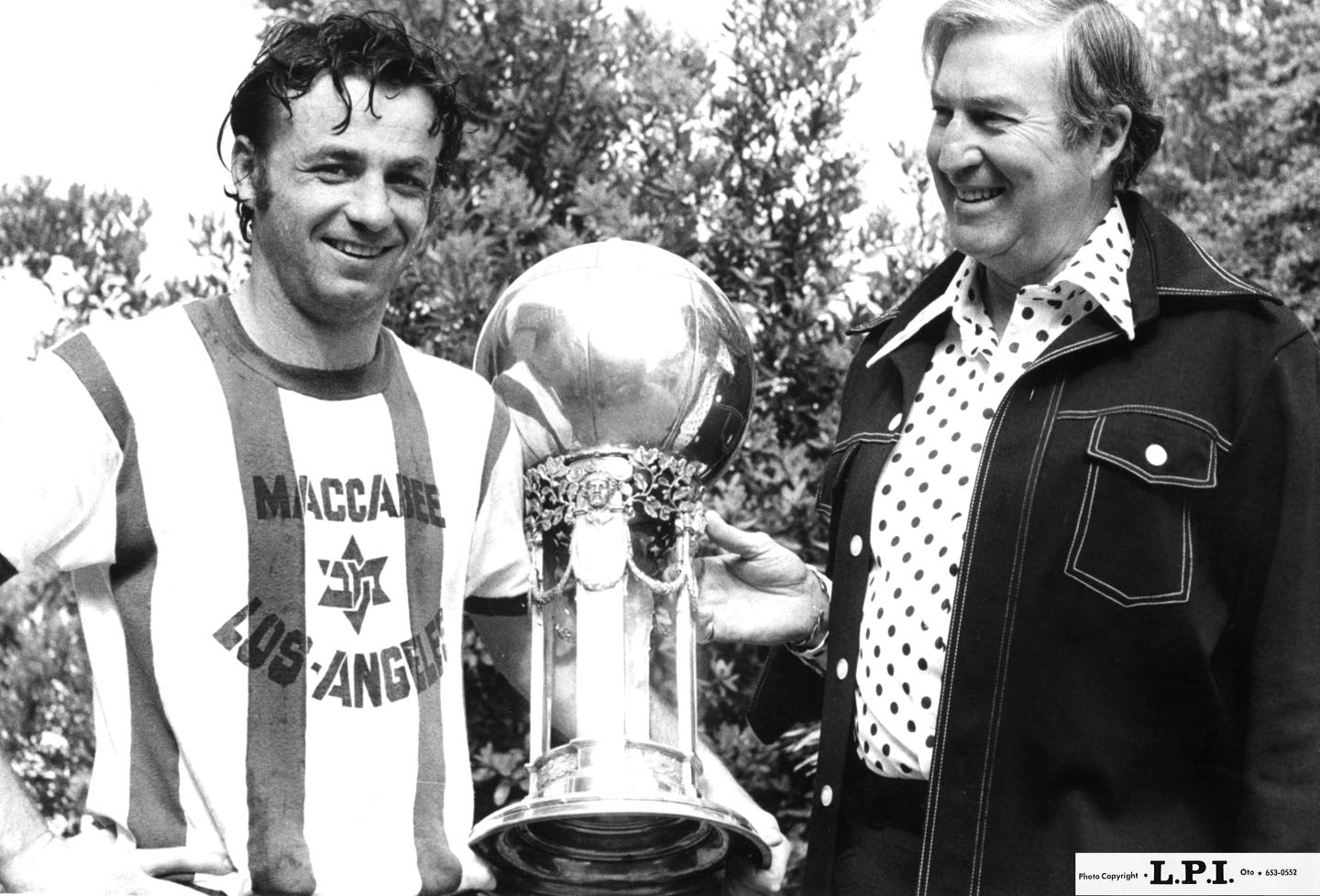 The competition was known as the National Challenge Cup in its early years, and was renamed and dedicated to MLS owner and American soccer pioneer Lamar Hunt in 1999. From then on it became the Lamar Hunt U.S. Open Cup. In 2016, FC Dallas, who are owned and operated by Hunt’s sons Clark and Dan, gave the trophy a homecoming of sorts when they defeated New England Revolution 4-2 in the tournament final played at Toyota Stadium in Frisco, Texas.

Many legends of American soccer have graced the stages of the U.S. Open Cup through the years. Perhaps none shine as bright as the mustachioed and lethally left-footed Billy Gonsalves, who won the Cup a record eight times with four different teams. In 1931, Glasgow Celtic manager Willie Maley said, without hesitation: “This Billy Gonsalves is the greatest player I’ve ever seen.” Sometimes called the Babe Ruth of American Soccer, this son of Portuguese immigrants and the seventh of nine children, Gonsalves lined up for the U.S. Men’s National Team in both the 1930 and 1934 FIFA World Cups. Bert Patenaude for Fall River Marksmen against Bethlehem Steel in 1930

Employer-owned teams dominated the 1920s and 30s, with industrialists in the Northeast and Midwest importing talented foreign players with the promise of good jobs and soccer on the side. Bethlehem Steel won five titles between 1914 and 1924. The likes of St. Louis Ben Miller, named after a prominent hat company, Brooklyn Robbins Dry Dock, St Louis Scullin Steel, Todd Shipyards, Vesper Buick, Holley Carburator, Manhattan Beer, Morgan Strasser and St Louis Stix, Baer & Fuller all made their mark on the competition.

A rich broth of backgrounds


It’s impossible to untangle ethnicity and soccer in a country of immigrants like the United States. Many Open Cup champions were teams formed by newcomers, proud of their native land and their adoptive home, and eager to meld the two in the form of a soccer club. The result of this most American of hybrids are champions with names that span the old world and the new, like New York Hakoah – champions of 1929, who took their name from the Hebrew word meaning Strength. Philadelphia German-American SC won in 1936 and Chicago Sparta two years after. Among the list of Open Cup winners are: Brooklyn St. Mary’s Celtic, Brooklyn Hispano, New York German-Hungarians, SC Eintracht, Philadelphia Ukrainian Nationals, New York Hungaria, New York Ukrainians, New York Greek-American, New York Hota, Los Angeles Maccabee, New York Pancyprian-Freedoms, the Brooklyn Italians, DC’s Club España and San Francisco Greek-American. 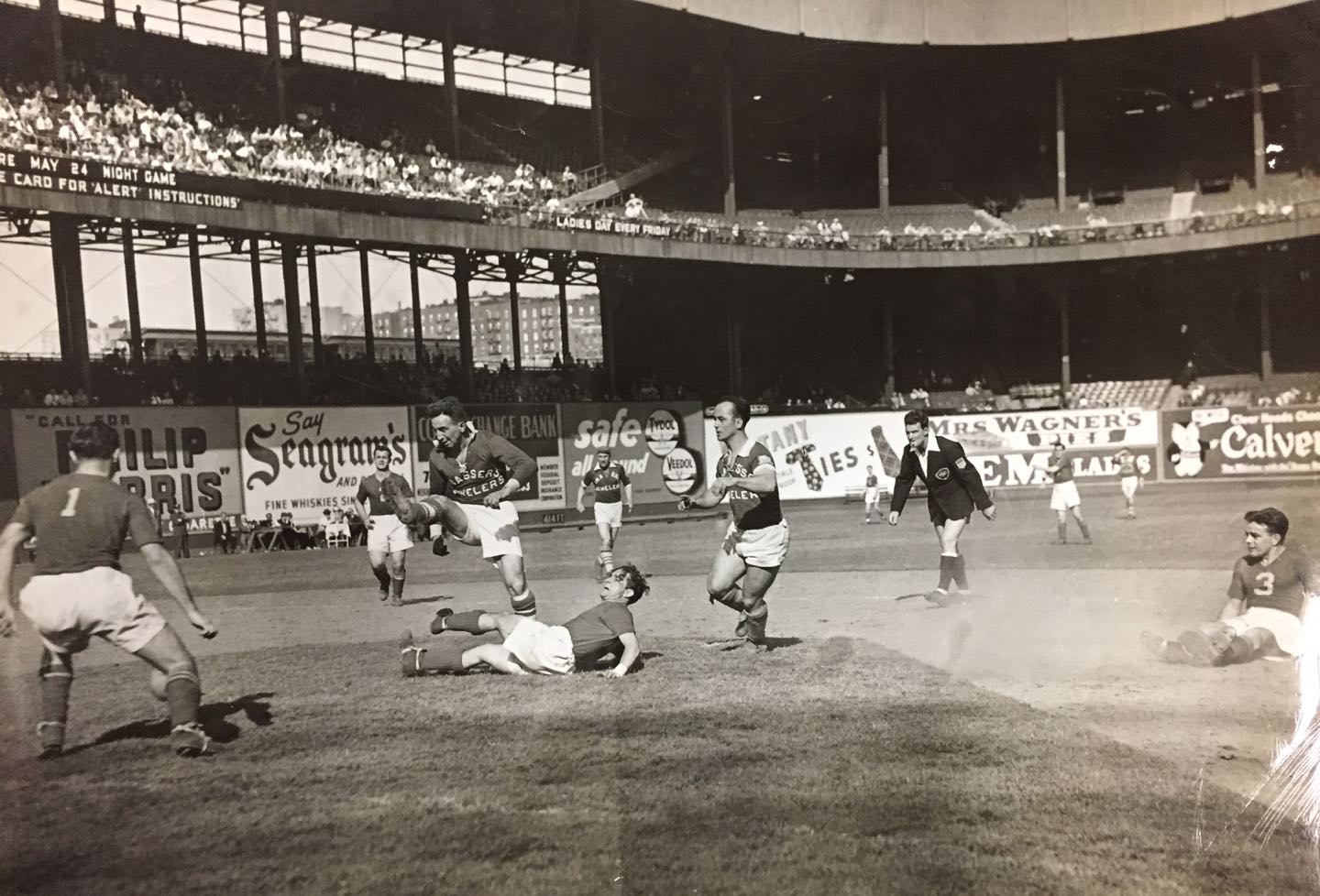 There’s no matching the North American Soccer League of the 1970s and early 80s for over-the-top glitz and glamor. During the league’s salad days, when global superstars like Johan Cruyff, Franz Beckenbauer, George Best and Pele, came to play in the USA, the league declined to take part in the U.S. Open Cup. Theories abound as to why the likes of the New York Cosmos, Chicago Sting and LA Aztecs refused to play, the most plausible being that those big-timers wanted to avoid the possibility of being beaten by smaller fish. “They (NASL sides) didn’t want to run the risk of losing to amateurs,” Dr. Joe Machnik, Open Cup champion in 1965 with New York Ukrainians, told usopencup.com.

Romance be damned! Since the inception of Major League Soccer in 1996, teams from the country’s top flight have dominated the U.S. Open Cup. Only once since then has a team from below the summit of the United States’ soccer pyramid won the competition, when the Rochester Rhinos beat four MLS teams to claim the crown in 1999. The Charleston Battery also reached the Final in 2008, but fell 2-1 to D.C. United. With four titles each, Chicago Fire, Sporting Kansas City and Seattle Sounders FC lead the pack of MLS clubs, followed by D.C. United, FC Dallas and LA Galaxy (2 each) and Columbus Crew SC and New England Revolution (1 each). 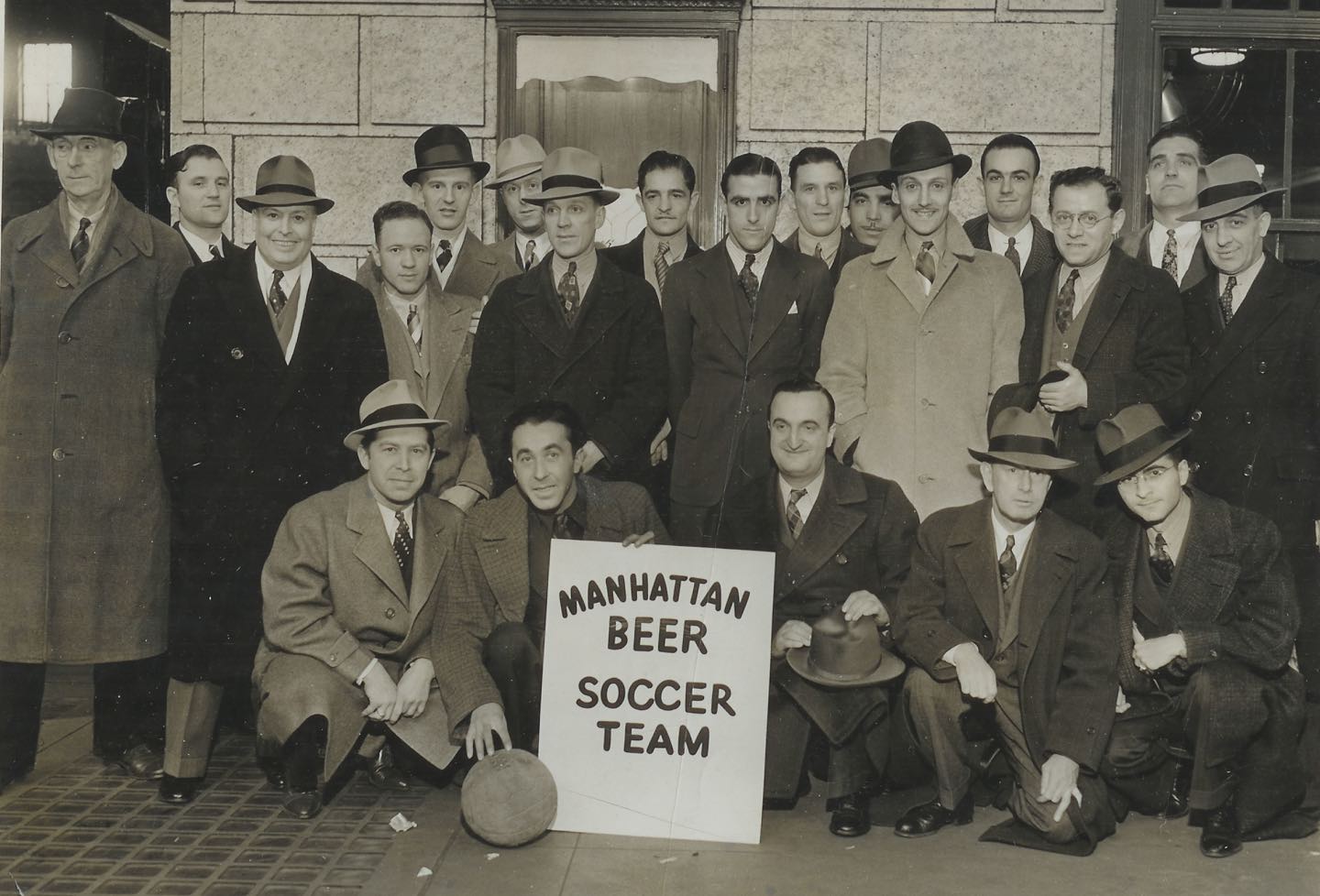 Manhattan Beer in the late 1930s

Travails of a Trophy

The 64 winners of the U.S. Open Cup all have their names etched on the base of the Sir Thomas Dewar Cup. The trophy was donated by whiskey magnate and soccer promoter Sir Thomas Dewar in 1912. The original trophy was retired in 1979 due to the damage sustained over a long life of being grasped by grateful hands. But the Dewar Cup came back out of retirement for a brief revival in 1997 and was last awarded to the Chicago Fire when they won the 2006 tournament. The Dewar Cup is now living the good life behind glass at the National Soccer Hall of Fame in Frisco, Texas.

Sporting Kansas City, Chicago Fire and Seattle Sounders are all on the cusp of equaling the record of most wins in Open Cup history. Another title for any one of these four-time champions would bring them level with Bethlehem Steel and Maccabee Los Angeles, a club formed by Israeli ex-pats, Holocaust survivors among them, who dominated the 1970s and early 80s with their five championship runs. Fall River Marksmen and Philadelphia Ukrainians also have four titles to their name (though some argue the Marksmen are also five-time winners of a kind). The other four-time champs, New York Greek Americans, are not among the 100 participating teams in 2020.

On that day, Captain @MattBesler claimed his third Open Cup 🏆, all with #SportingKC 💯#TBT | #OpenCupREWIND pic.twitter.com/aO45PBdsW6

The romance of the U.S. Open Cup derives, in large part, from its format as a single-elimination competition open to all affiliated professional and amateur teams in the United States. $300,000 in prize money is on offer to the winner of the 2017 event, an unfathomable amount for the hopeful amateurs from the Open Division. And while a non-Major League Soccer side hasn’t won since the Rochester Rhinos did it back in 1999, the dream of a fairytale scramble to the Final is a spur for those small sides who play for the love of the game. Financial inducements don’t stop with the champions, either, as the runner-up collects $100,000 and the team that advances farthest from each lower division gets $25,000.

Doorway to the international arena

100 teams will participate in the 2020 edition of the Lamar Hunt U.S. Open Cup. Among the sides in the 107th installment of the competition are reigning champions Atlanta United and 22 other Major League Soccer outfits. There are 25 teams from the officially recognized Division II United Soccer League (USL Championship), including Charleston Battery, who, in 2008, became the last non-MLS team to reach the Final. Among the brigade of amateur combatants, Christos FC of Baltimore are back and hoping to match their run to the Fourth Round at #USOC2017, where they earned the chance to play D.C. United of Major League Soccer.