Tied for Third in Octagonal Standings, USA Will Look to Close September Window With Valuable Road Points; Kickoff from Estadio Olimpico Metropolitano Set for 10:30 p.m. ET on Paramount+, Telemundo and Universo
September 7 2021
On the Pitch

CHICAGO (Sept. 7, 2021) - After earning points in its first two matches of World Cup qualifying, the U.S. Men’s National Team continues the road to Qatar against Honduras on Sept 8 in San Pedro Sula. Honduras-USA is the USMNT’s third World Cup qualifier in seven days, the first set of games in a 14-match, seven-month gauntlet against the region’s best teams for a berth in the 2022 FIFA World Cup.

Kickoff from Estadio Olimpico Metropolitano in San Pedro Sula is set for 10:30 p.m. ET on Paramount+, Telemundo and Universo. Fans can follow the USMNT during World Cup qualifying on Twitter (@USMNT), Instagram (@USMNT), Facebook and the official U.S. Soccer App.

The USMNT has made a number of roster changes during the September international window. Goalkeeper Zack Steffen and midfielder Weston McKennie are no longer on the roster and have been replaced by goalkeeper Sean Johnson and midfielder Jackson Yueill, who both helped the USA win the 2021 Gold Cup this summer.

Additionally, Sergino Dest (right ankle sprain) and Gio Reyna (right hamstring) have been ruled out of Wednesday’s match vs. Honduras due to injury. Forward Tim Weah was forced to withdraw from the roster prior to the camp with an injury suffered in training with his club.

ANOTHER POINT VS. CANADA

The USA earned another point on its journey to qualify for the 2022 FIFA World Cup with a 1-1 draw vs. Canada on Sunday night in Nashville, Tenn. Brenden Aaronson sparked and scored the USA’s lone goal in the 55th minute, but Canada equalized shortly after when speedy winger Alphonso Davies teed up forward Cyle Larin just seven minutes later.

While the USA dominated in possession and had the better of scoring opportunities, Canada defended well in a low block and threatened in transition. The game was a physical, stop-and-start affair, but the U.S. nearly got on the board just before halftime with a flurry of dangerous chances in the Canadian box, with Christian Pulisic hitting the post in the 36th. 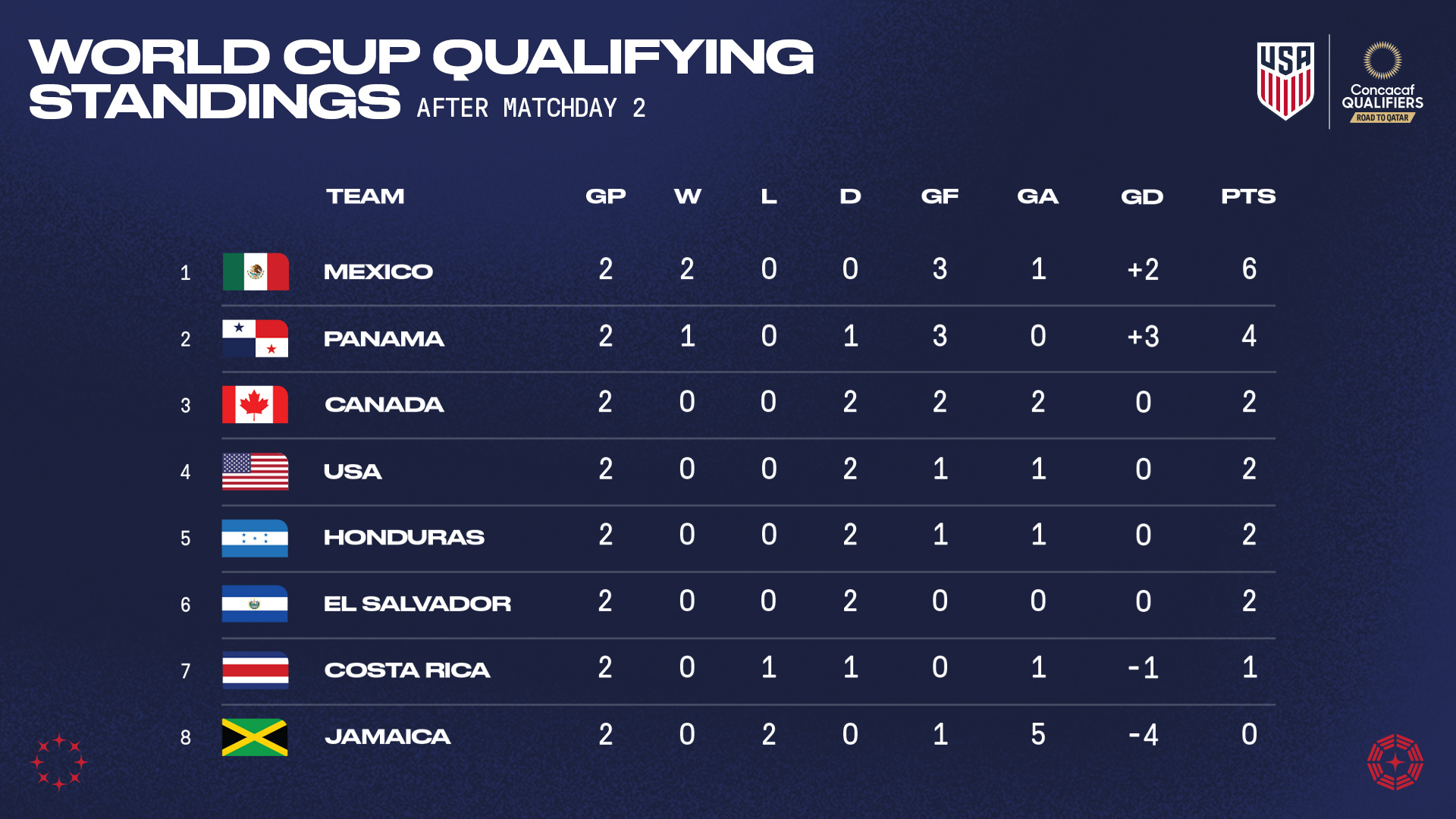 Starting with two games on the road, Honduras has also tied its first two matches of World Cup qualifying and sits tied with the USA, Canada and El Salvador for third in the Octagonal table at two points. Los Catrachos kicked off qualifying at Canada, drawing 1-1 with both sides scoring on penalty kicks. Alex Lopez gave Honduras the lead just before the half, but Canada equalized in the 74th. On Sunday, Honduras played El Salvador to a 0-0 draw in San Salvador, making nine changes to the starting lineup from its opener.

Teams qualify for the World Cup through their regional confederations, and the USMNT will have to run the gauntlet of Concacaf (North America, Central America and the Caribbean) to reach Qatar 2022. For the first time, eight teams will contest the final round of World Cup qualifying for Concacaf from September to March. The nations will play a 14-match round-robin, home and away against each of the seven other teams.

Due to the global COVID-19 pandemic, the World Cup qualifying schedule has been condensed from 18 months to seven. To accommodate the new schedule, the USMNT will play three matches during four of the five international windows rather than the usual two matches.

The USA faces a challenging road from the very outset in the September window. After a difficult road trip to El Salvador and Sunday’s draw with an on-the-rise Canada squad, another tough away date looms at Honduras.