Sunday’s Top of the Table Showdown Set for Tim Hortons Field in Hamilton, Canada; Kickoff at 3 p.m. ET on Paramount+, Telemundo and Universo
January 29 2022
On the Pitch

CHICAGO (Jan. 29, 2022) – After the USMNT kicked off its slate of three winter World Cup qualifying matches in seven days with a 1-0 victory against El Salvador, the USA travels north to visit group leaders Canada. Sunday’s showdown matches up the top two teams in the Concacaf WCQ standings as the U.S. sits just one point behind Canada in the table.

The USA and Canada have faced off in a number of important continental competitions during the last few years, but the stakes are higher on Sunday with just five matches remaining in World Cup qualifying. Kickoff from Tim Hortons Field is set for 3 p.m. ET (Paramount+, Telemundo, Universo).

*Unavailable for Sunday’s match at Canada

Forward Tim Weah did not travel to Canada because his vaccination – which meets all criteria in France, where he plays professionally – doesn’t meet Canada’s entry requirements. Defender Brooks Lennon departed camp with a left ankle injury while goalkeeper Zack Steffen remains day-to-day with back soreness.

ANOTHER THREE POINTS IN C-BUS

The USMNT returned to World Cup qualifying with a win on Thursday night, topping El Salvador 1-0 before a sold-out crowd of 20,000 at Lower.com Field in Columbus, Ohio. After controlling play for the vast majority of the match, defender Antonee Robinson found the breakthrough shortly after halftime, finishing a header from Jesús Ferreira for the game-winning goal.

The hard-charging U.S. press caused trouble for El Salvador all evening. The Ohio capital once again lived up to its billing as a fortress for the USMNT - the USA’s record in World Cup qualifying matches in the city now stands at 9-1-2 and 10-1-3 overall.

Scheduling changes due to the COVID-19 pandemic set the stage for a special January/February international window with all three World Cup qualifying matches taking place in wintry conditions. When Canada chose to host its home match in Hamilton, Ontario, the U.S. also opted to embrace the cold, unleashing a unique home field advantage in the frosty conditions of Columbus and St. Paul, Minn.

After a successful start to the window in Columbus, kickoff temperature is expected to be lower in Canada and the USMNT is excited to take on the polar climes.

“You know what? I want it to be freezing. I want it to be cold. I want the snow,” said defender Walker Zimmerman. “I want to be a part of something so iconic that I saw and I really remember growing up. And that’s exciting to me. So I think the guys are ready to embrace it.”

With an average age of 23 years, 92 days, Thursday’s lineup was the USMNT’s fourth youngest in World Cup Qualifying history. Each of the three younger Starting XIs have also come during the current cycle. The USMNT roster is one of the youngest in the world during this international window and continues to gain experience with each game. Forward Brenden Aaronson and midfielder Tyler Adams have appeared in all nine WCQ matches so far. 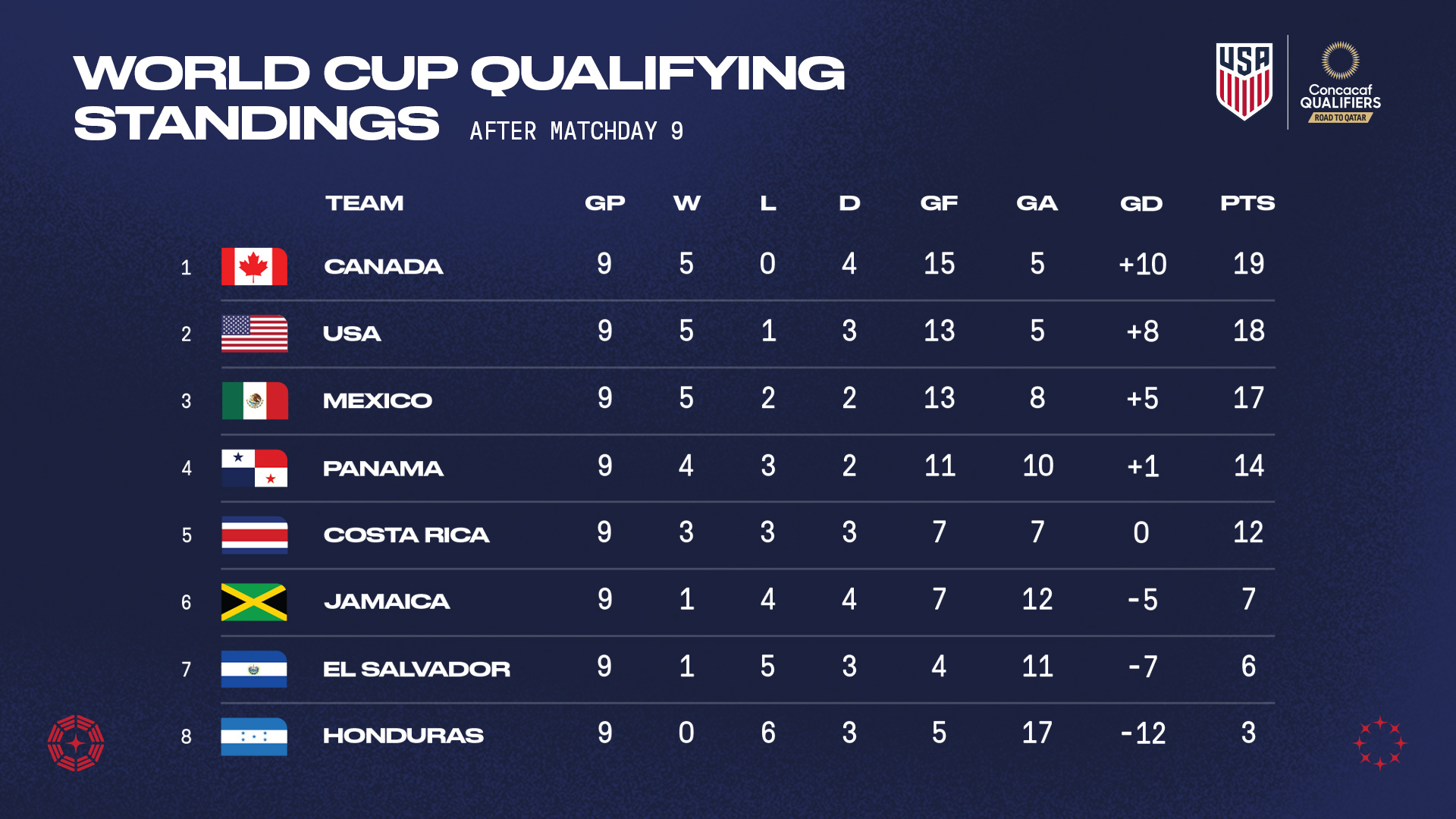 During the last few years, the USMNT has faced off with Canada in a number of important continental competitions. The nations were paired in Group A of the inaugural 2019 edition of the Concacaf Nations League, and while Canada came out on top in Toronto it was the United States who dominated its home leg for a 4-1 victory in Orlando, Fla. That game officially cap-tied Sergiño Dest to the U.S. as he recorded his first international assist, while current call-ups Jordan Morris and Gyasi Zardes scored.

The USA was also drawn with its northern neighbor in Group B of the 2021 Gold Cup, topping Canada 1-0 to secure the top spot in the group. Shaq Moore scored the fastest goal in the USMNT’s modern era when he tallied the eventual game-winner just 20 seconds into the game.

The USMNT last faced Canada in its second match of the Octagonal, a 1-1 draw in Nashville, Tenn. While the USA struck first on forward Brenden Aaronson’s fourth international goal, Canada answered quickly when forward Cyle Larin scored just seven minutes later. Despite creating the better of chances and heavily out-possessing Canada, the U.S. wasn’t able to find a game-winner in its first home World Cup qualifying match of the cycle.

CANADA ON THE RISE

Canada found success in the cold during the November window, playing both of its matches in Edmonton, Alberta, highlighted by a 2-1 victory vs. Mexico as temperatures dipped to -10 degrees by the opening whistle. The Canucks kicked off the January World Cup Qualifying window with a 2-0 victory at Honduras, benefitting from an early own goal before forward Jonathan David - teammate of USMNT forward Tim Weah at Lille - netted an insurance goal in the 73rd.