The Great Eight Round One: Long Waits & Hidden Heroes as Des Moines’ David Reloads His Slingshot

The return of the U.S. Open Cup also marks the return of our Great Eight Series, where we take a light-hearted Round-by-Round look at some of the magic moments of America’s favorite soccer tournament.
Jonah FontelaMarch 24 2022
Open Cup

Fans of the 109-year-old Lamar Hunt U.S. Open Cup (in its 107th edition) live by its magic moments. And the First Round of the 2022 competition – back after a two-year hiatus caused by Covid-19 – tossed up a good few of those on March 22 and 23. Join usopencup.com for a look back at eight moments of note from the 16 games in which 61 goals were scored, on-field hammers were wielded, Mother Nature had her say and a murder of Crows from Minnesota won and lost in their long-awaited Cup debut.

●      First Round Results & Second Round Schedule

Dramatic sunsets and mist-shrouded floodlights could well be mascots of the Open Cup’s early rounds – with all games played midweek (most of an evening) and spring blooming across the vastness of this nation. But the same elements that light the dusks in purples and yellows and the blood-deepest reds also invite harsh weather systems that can wreak havoc on teams and fans. Organizers too. Southern States SC Stars and Georgia Revolution FC barely managed their game in Hattiesburg, Mississippi despite cyclones forming nearby and tearing through the southland. The Lansdowne Bhoys of Yonkers, New York, and their hosts the Ocean City Nor’Easters, were buffeted by lashing Atlantic winds and heavy rain on the Jersey Shore all the way through 120 minutes of play and a penalty shootout.

However Lynchburg FC and Nova FC (both of Virginia), weren’t spared. A heavy weather system, with lightning sparking the sky, produced the Round’s only draw (in a manner of speaking). The contest was halted in the 77th minute with the score tangled at 1-1. The solution? More soccer, of course. The game will be replayed from the start at a time agreed to by the managers of both teams – who’ll surely be keeping an eye on those doppler radar images.

Long wait and a City stunner

Anticipation, and the delay of gratification, has a way of heightening sensation. Thus was the case for Minneapolis City FC. The ‘Mighty Crows’ flocked to Des Moines, Iowa with high hopes, a winning sense of humor and a history of almost playing in the U.S. Open Cup. Disqualifications, quirks of tie-breaker systems and global, once-in-a-century pandemics always seemed to get in the way. They leaned into their self-applied title as ‘undefeated’ in the Open Cup. But when their big day finally came, they met the moment. Lionel Vang stood over a dead ball some 30+ yards from goal – so far out the Menace players opted not to build a proper wall. What everyone with working eyeballs and a sense of decorum saw as an impossibility, Vang saw as an opportunity. His right-footed thunderbolt shook the moisture from the netting, waking the spiders from their slumber in the top corner.

And while Minneapolis City SC finished 4-2 losers on the night, they are officially and forevermore deemed, by the power vested in usopencup.com, still undefeated.

These amateurs from Iowa have been a club since 1994. It’s true, they have American football lines on their home turf. They have an old-fashioned mascot, the Maniac, who’s a humanoid figure with a soccer ball for a head. That’s true too. But there’s something else that’s true: in their 28 years as a club they’ve excelled at taking down giants. Only one other amateur team (the Flint City Bucks, who were once the Michigan Bucks and before that the Mid-Michigan Bucks) have dropped more professional teams in Open Cup play. Now, after quietly dispatching everyone’s favourite debutants from Minneapolis, the Menace have a chance to punch up again in their 14th Open Cup.

The giant hiding in the shadows is one Union Omaha, professional outfit and reigning USL League One champions. The game’s on the road too. Who else has that old cupset feeling?

Danso the Man for Bhoys

Lansdowne Yonkers manager Sean Kelly, the Irish-born former Arsenal youth who captained the side in the 2019 Open Cup, said about goalkeeper Abdoukarim ‘Kabo’ Danso: “He is the club.” With the Bhoys for nearly a full decade, this giant, who hails from the Gambia in Northwestern Africa, arrived in New York in 2013. He’s won two USASA National Amateur Cups (the Yonkers men are the trophy’s current holder) and been the side’s hero on too many occasions to count. This First Round of the Open Cup was no exception, though it started out terribly for the big man when he bobbled a weird shot early to allow hosts Ocean City Nor'easters an early lead. But in the shootout, after extra-time ended 1-1, the 34-year-old’s massive frame and sharp instincts made all the difference. In the cold rain of the Jersey Shore’s early spring, the club hero, and enduring symbol, kept out Kevin Curran’s attempt to send the Bhoys into the Second Round for the third time in three Open Cup appearances.

While we’re at it, let’s have three-cheers for all the net-minders, those lonely keepers of the gate. In the First Round, with only amateurs in action, you see a wide range of them. All shapes and sizes (and ages). From Park City’s Lukas Tate, just 18, who wore number-zero and looked like he might weigh 100 pounds soaking wet, to Cleveland SC’s Conor Cable. Despite carrying a few extra pounds in the middle, he was a true Open Cup hero. A solid wall of mortar and brick. His save in the dying moments of extra-time in a slim win over Chicago FC United saw him leap and expand in the air (think: starfish) to ensure his side’s debut was one to remember. 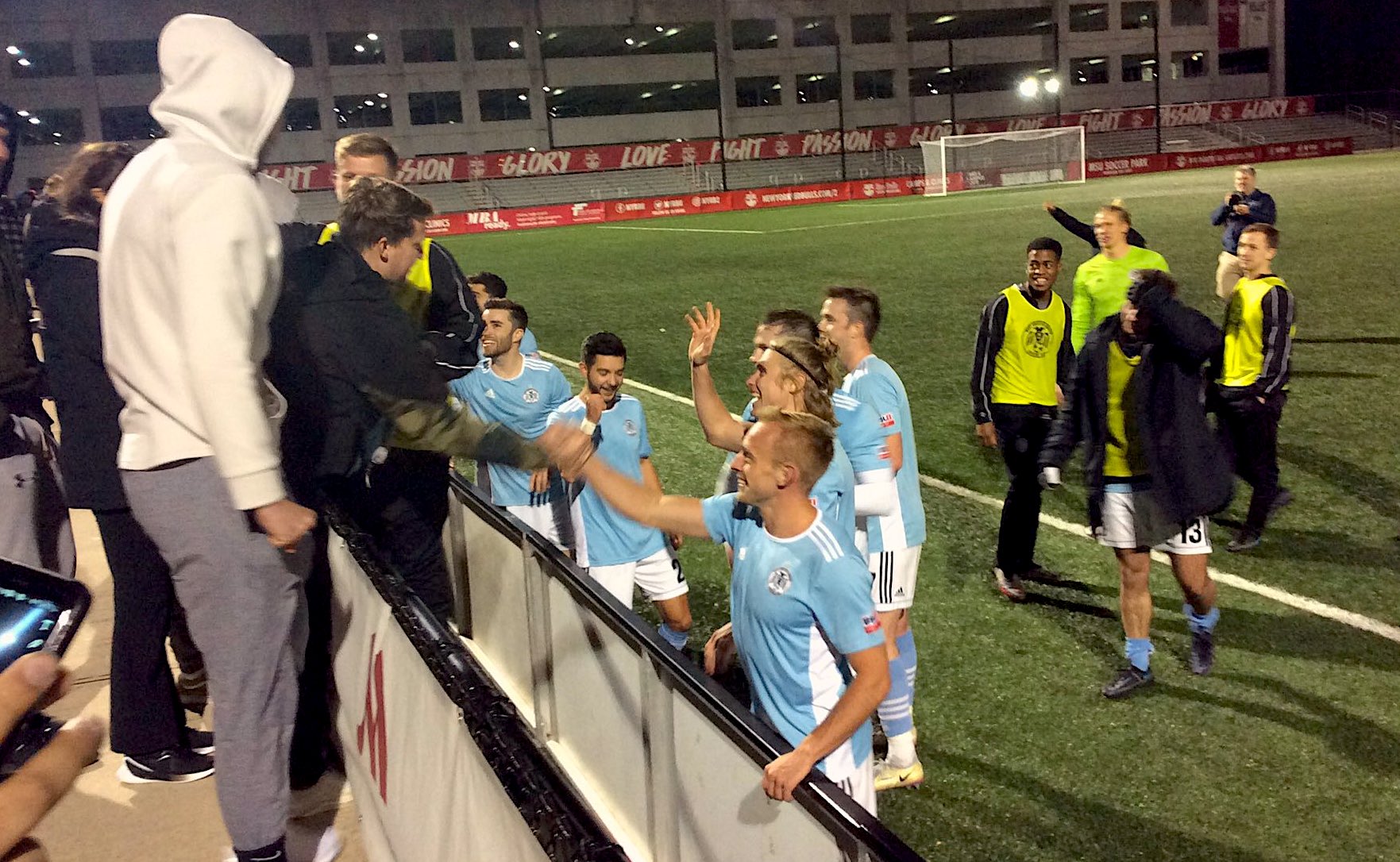 Strange things happen in the Open Cup. Especially the early rounds. This is no judgment, rather a recognition of a unique competition that incorporates the whole of the soccer ecosystem from the grassiest roots to the tip of the top of the MLS spear. Jovany Herrera of Azteca FC needed a friend to drive him all the way from Denver to Tulsa (that’s over 700 miles and ten road hours) after his passport and wallet were stolen and air travel ruled out. That driver, unknown and unnamed, is now the stuff of Open Cup legend. And ahead of the last game of the First Round’s second night, another hero emerged: a field maintenance man in short pants. He raced from one goal to the other, hammer in hand, to smash down the net ties which, in all the excitement of Las Vegas Legends Open Cup debut, had been forgotten.

Oyster Bay All the Way?

It wasn’t a bad Open Cup debut for a club that didn’t exist at this time last year. Backed by a local businessman and stacked with local standouts, Oyster Bay United FC, out of Long Island, stunned Hartford City FC from the opening whistle at Dillon Stadium in Connecticut’s capital. Unanswered goals from Junior Rosero, Franco Paz and Sebastian Ruiz (all in the first half) mean the men from Long Island will return to that very same Dillon Stadium in two weeks to take on second-division USL Championship pros Hartford Athletic. With three goals to their name (and zero conceded) one wonders where the ceiling might be for this young club? And lest we forget, in qualifying, the men from Oyster Bay knocked off a pair of former Open Cup champions in NY’s Greek Americans and Pancyprian-Freedoms. A courageous side, with talent and fight to spare, you’d do well to keep a close eye on OBUFC.

The Open Cup, it should be noted, always favors the brave. And the chaotic too. This was best typified by the Miami United FC v City Soccer FC contest in South Florida, where three goals in a frenetic five-minute stretch saw the lead swing back and forth until, finally, the host Miamians settled the affair for good and all.

Goals Galore in Opening Round

Numbers can be boring. Let’s face it. But the Open Cup’s stats never seem to disappoint. A tournament where winners are required in every game makes for a stampede of satisfying stats. The First Round of the 2022 edition saw 61 goals from 16 games (just look at that symmetry). No game saw fewer than two goals scored. Only four of the 32 teams in action failed to find the net (you know who you are). Eight of the 16 games produced four or more goals and there wasn’t one single goalless draw through 90 or 120 minutes in the entire schedule.

Wins and losses only. There’s no sharing here. But if you squint hard enough you’ll come to see the winners and the losers aren’t always easy to distinguish. Minneapolis City, those dreamers from the North – losers? Never. Brockton United FC, run by a high school teacher who brought the flavor of Cape Verde’s diaspora to the 2022 Open Cup? They lost? Just doesn’t sound right. They’re gone, yes, and out of contention to be sure. But that’s only for now. It’s the same with the plucky Park City Red Wolves – the Utah youngsters who nearly drew level in the dying moments a few paces from the fabled Strip. Same goes for our old friends FC Motown and first-timers Denton Diablos and even Hartford City. All will be welcomed back and met as friends when they return to play again.