That would be to win and keep Panama off the scoreboard.

The USA has recorded clean sheets in all four of its WCQ home wins against the Central American side, while outscoring its foes, 14-0.

Let's take a look at three of those qualifiers:

Only four days after connecting for his first goal in his international debut, Eddie Johnson did himself three times better.

He struck for a hat-trick in a 6-0 romp past Panama at RFK Stadium in Washington, D.C., a result that clinched a spot for the USA (3-0-2, 11 points) in the Hexagonal with one game remaining in the semifinal round

What made it even more impressive was that the 20-year-old forward came on as a substitute, making him the first USMNT player to come off the bench and score three goals. 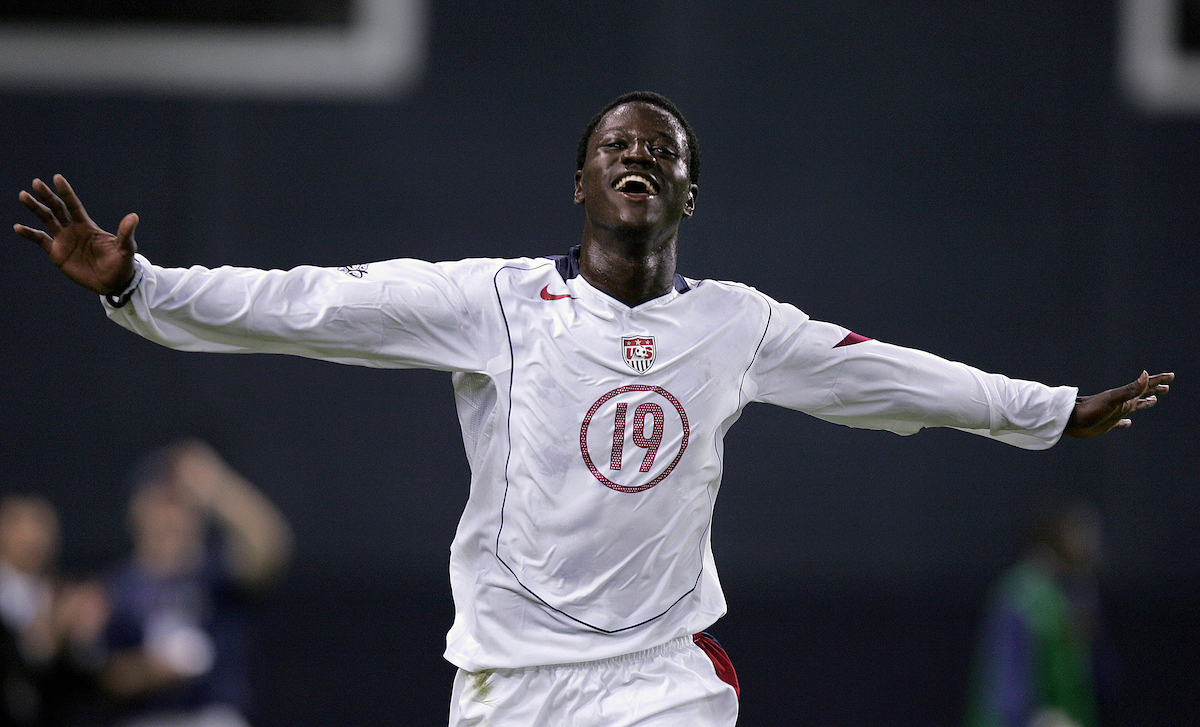 He netted his first international goal in a 2-0 win at El Salvador on Oct. 9.

"I just want to see if I can play at this level," Johnson was quoted by the Associated Press. "This is awesome. It’s what you dream of - maybe dream of just getting on the field for a few minutes or maybe scoring a goal. But three ..."

Johnson then shook his head.

By the time Johnson entered the game for Josh Wolff in the 67th minute, Landon Donovan already had bagged a brace for his 18th and 19th international goals. 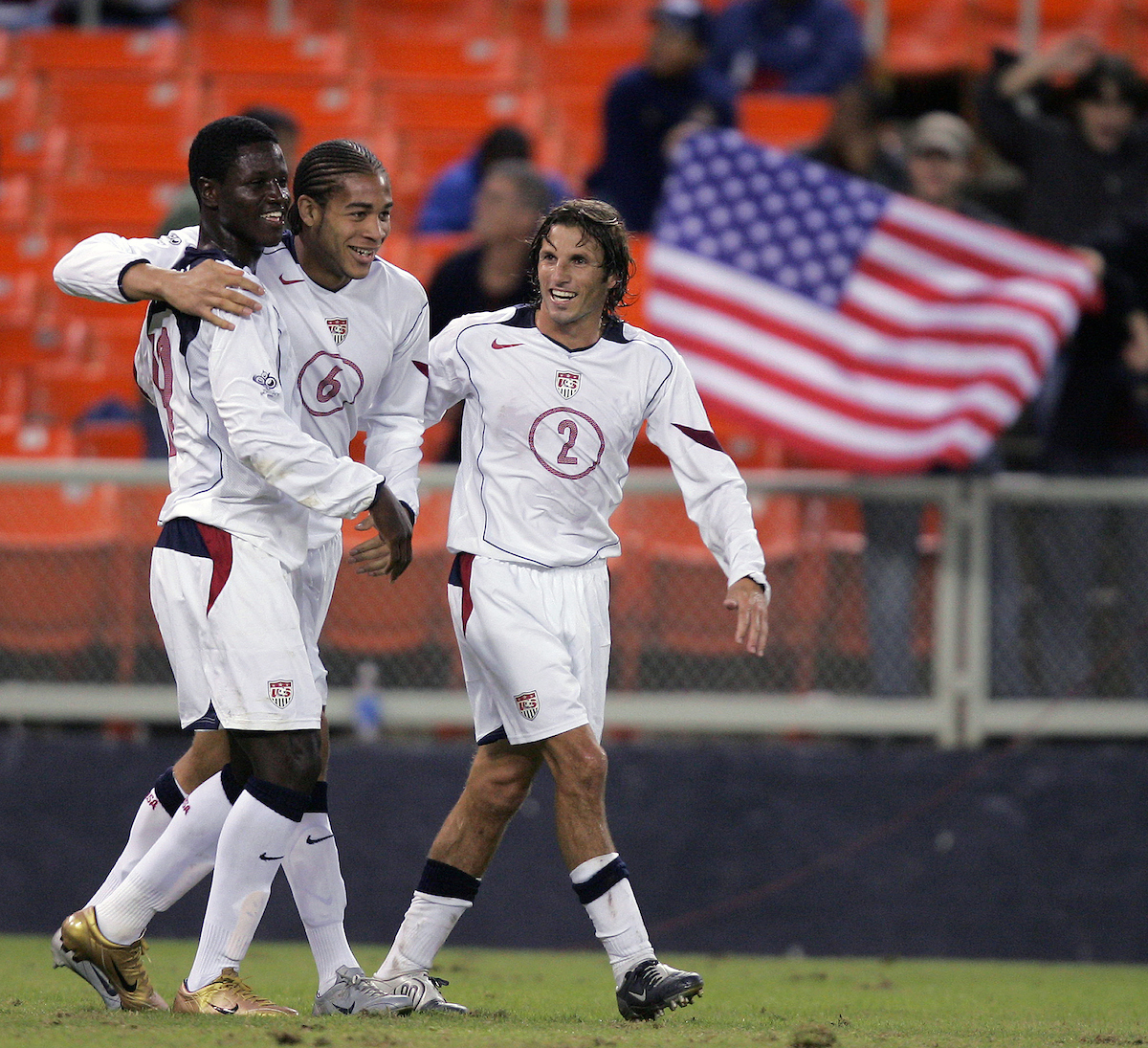 Donovan, the 22-year-old team captain, gave the hosts all the scoring they needed in the 21st minute when he slipped Wolff's left-wing cross past goalkeeper Donaldo Gonzalez. He doubled the lead in the 57th minute, striking from 10 yards off a Kerry Zavagnin feed.

Then came Johnson's 17-minute onslaught. The Dallas Burn player did his damage in the 70th, 84th and 87th minutes. 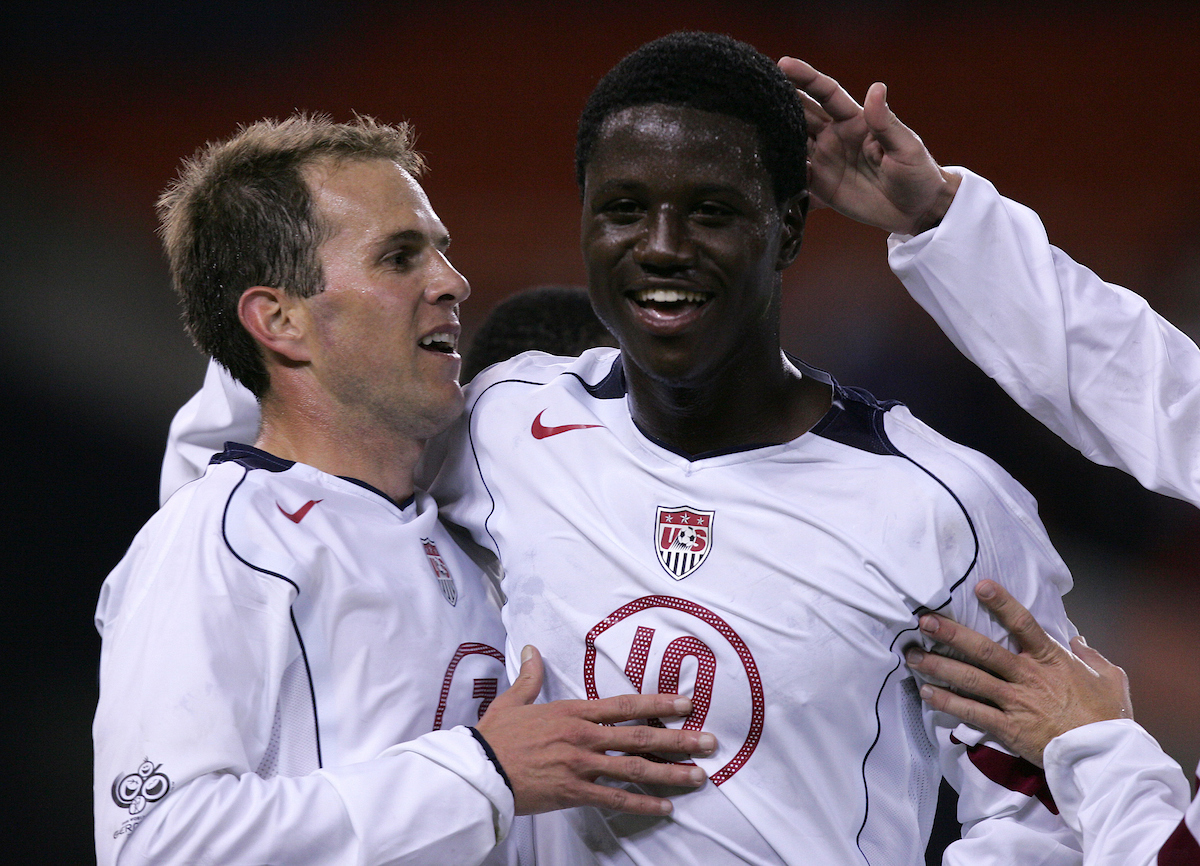 He extended the USA margin to 3-0, heading home a Carlos Bocanegra cross. Johnson then scored indirectly off a corner after two passes before sliding home a shot off a cross from Eddie Lewis. He completed his virtuoso performance with an 87th-minute tally.

"I was told if you make a run, nine times out of 10 you will get the ball," Johnson said. "It's true. This was one of those games where everything happened right for me.”

The USA's relentless pressure caused Panama to score an own goal in the 90th minute.

The USA's first WCQ in Seattle in 37 years could not have gone much better.

An enthusiastic crowd of 40,847, the seventh largest crowd for a World Cup qualifier up until then, watched the USMNT defeat Los Caneleros at CenturyLink Field in Seattle, Wash.

"You can't talk about the game and not talk about the crowd," midfielder Michael Bradley told the Longview Daily News. "The best crowd I've been in for a U.S. qualifier.”

"You don't know what a difference it makes when you play in an atmosphere like this." 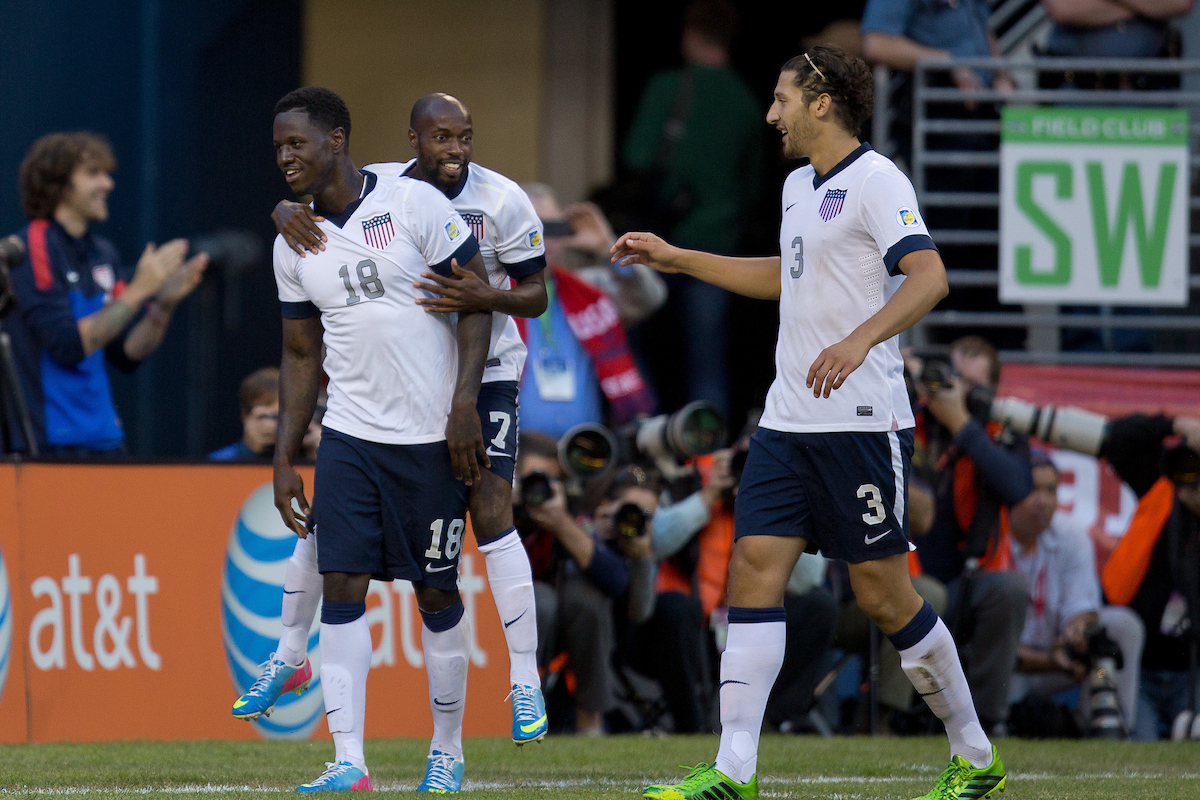 Jozy Altidore and Eddie Johnson supplied the offense for the USA (3-1-1, 10 points), which gained sole possession of first place in the Hexagonal.

"Right now, we're having fun," Johnson was quoted by the Associated Press. "But most importantly we're on the same page and have one common goal, which is qualifying for the World Cup. We've got one more game to put ourselves in a good position to make that happen."

After Altidore was taken down in the penalty area - his pleas for a penalty kick were denied - the U.S. striker scored in the 36th minute, putting home a Fabian Johnson cross.

"He's such a physical presence and sometimes he doesn't use it," head coach Jurgen Klinsmann told the Daily News. "He's just now starting to use it, to shield the ball and work for us. It's really nice to see that coming out." 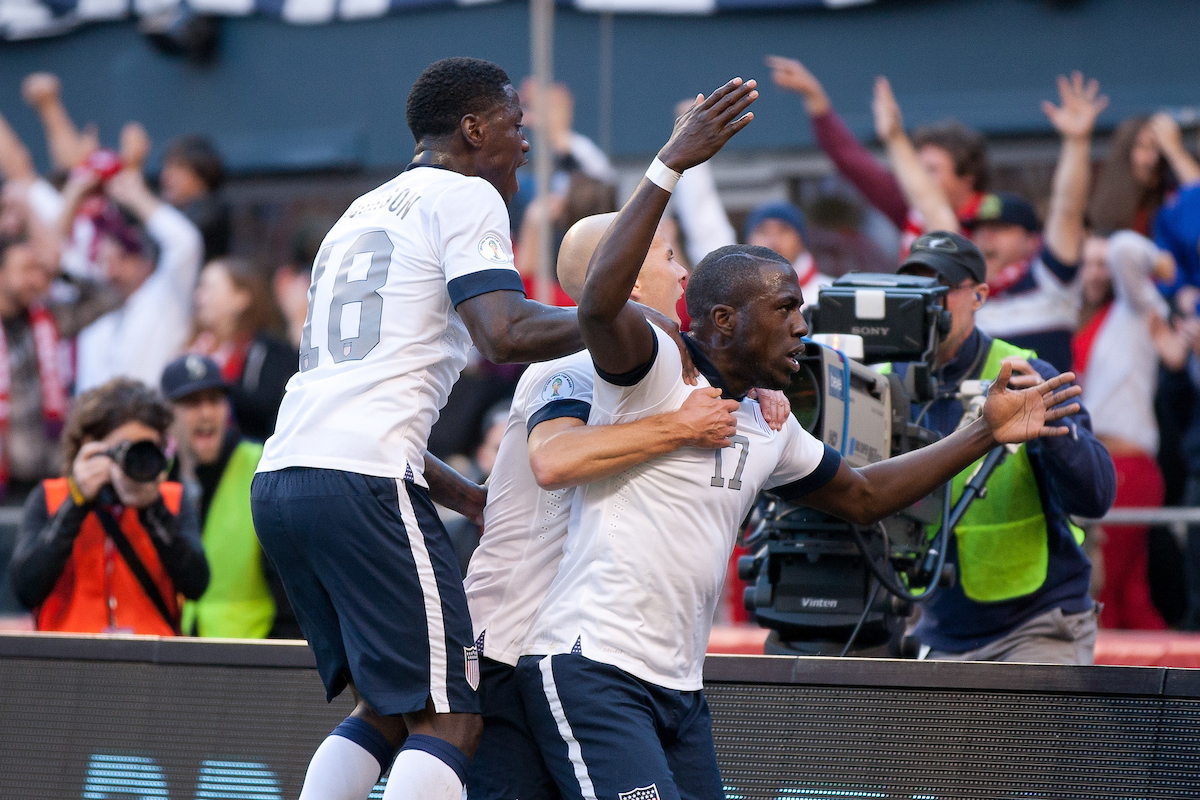 Eddie Johnson, playing in his home stadium, gave the USMNT some breathing room and its supporters something more to cheer about as he ran onto defender Geoff Cameron's over the-top-pass before sliding a shot past keeper Jaime Penedo in the 53rd minute.

"Obviously very pleased with our performance," Klinsmann said. "Throughout the entire game, we were in control of every area on the field. The guys did their job."

Needing a win to keep their World Cup hopes alive, the Americans rolled over the Panamanians, 4-0, to snap a three-match winless streak in Orlando, Fla.

The result boosted the USA (3-3-3, 12) two points ahead of the Central Americans into third place in the Hexagonal, the third and final automatic berth for Russia 2018. 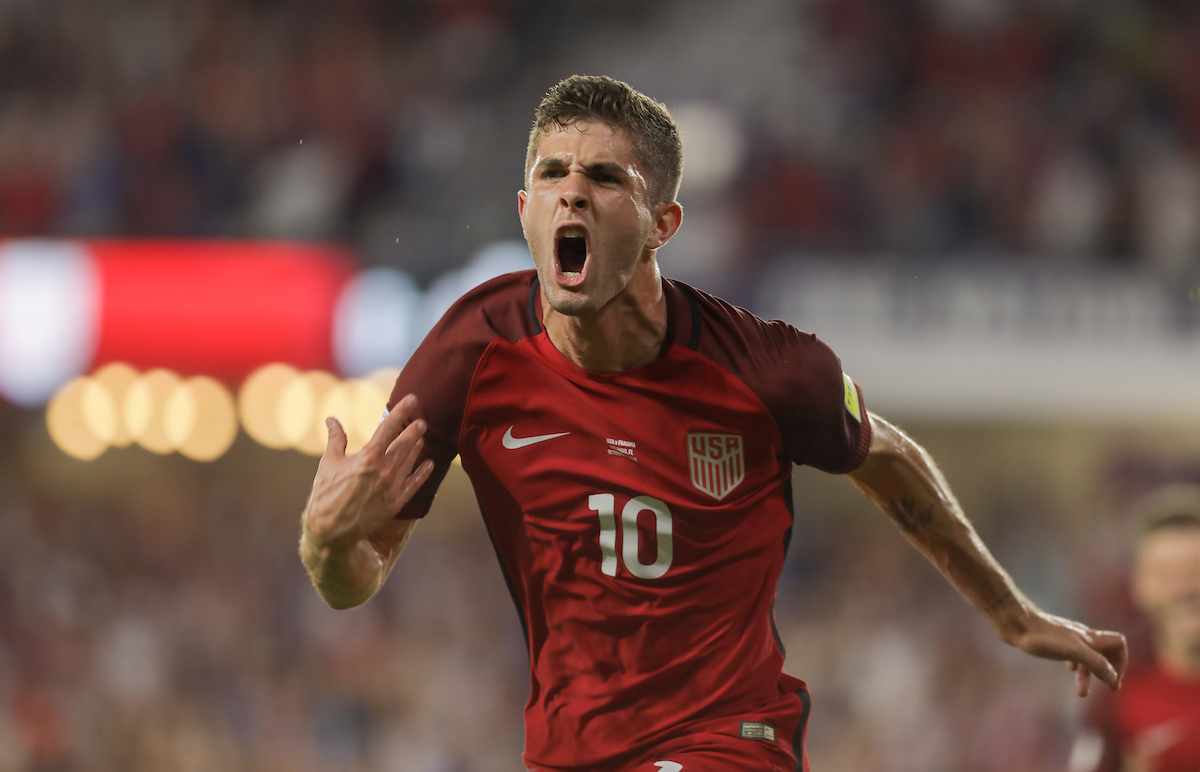 Nineteen-year-old midfielder Christian Pulisic sparked the USA with an early goal before he set up the first of Jozy Altidore's two scores in front of a capacity crowd of 25,303 at Orlando City Stadium (now Exploria Stadium).

"He was able to just disrupt them in so many ways," Altidore said. "You saw the difference he can make in the middle of the park, being able to go each way and just being so dynamic. I hate to kind of pour too much praise on him. I know he's a young kid. He's got a lot of work to do.

"But you can't help not see the difference he makes when he's one the field, especially when he's in the middle of everything."

Pulisic's goal, his eighth in 19 internationals, was a work of art and teamwork that took 112 yards to complete in the eighth minute.

Goalkeeper Tim Howard started the sequence with a goal kick that was headed forward by Bobby Wood. Altidore got possession and one-timed the ball to Pulisic, who jumped to avoid Roman Torres' challenge and sped to goal. Forcing goalkeeper Jaime Penedo to come off his line, Pulisic leaped over the keeper's outstretched arm. Just two yards from the endline, Pulisic slotted the ball into an empty net for a 1-0 lead.

"Jozy just laid it off to me and I was just gone," Pulisic told the Orlando Sentinel.

"We needed a result, and we came out flying right from the beginning," he added. "We needed a lot of movement against a physical Panama team that was not going to sit in and make it easy for us." 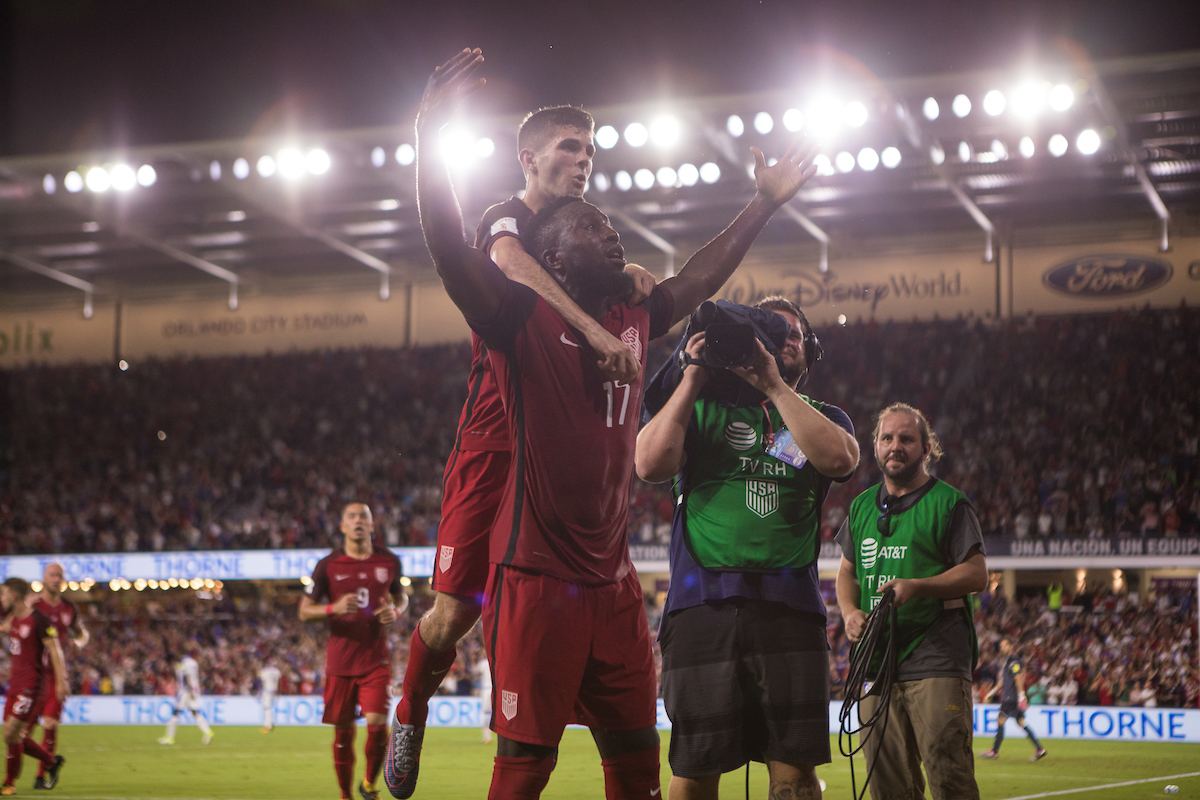 Up until that point, Pulisic had played a role in 11 of the team's 14 Hexagonal's goals.

Panama realized that and continued to hack down Pulisic several times. He was replaced in the 57th minute, walking off to a deserved standing ovation.

After Bobby Wood was fouled in the box, Altidore converted a penalty kick with an audacious chip shot in the 43rd minute for his 41st international goal.

Wood got into the act in the 63rd minute with his 10th international score, putting home a Paul Arriola feed to cap an emphatic 4-0 win.