Front To Back With Lauren Flynn

U.S. Under-20 Women’s Youth National Team defender Lauren Flynn was playing forward 18 months ago, but with an NCAA title and World Cup experience now on her resume, she’s cherishing her role on defense and the journey it took to get there.
August 16 2022
On the Pitch

As part of their mental preparation prior to the start of 2022 FIFA Under-20 Women’s World Cup, and to shine a light on the unique opportunity they were experiencing, U.S. U-20 Women’s Youth National Team head coach Tracey Kevins had all the players write a letter to their younger selves.

Twenty-year-old U.S. center back Lauren Flynn wrote to 12-year-old Lauren. The letter, written by hand, in small but aesthetic cursive, read in part:

“This journey has given me so much more than what happens on the field, and I will be forever grateful for it. I wanted to let you know that your hard work will pay off. Don’t lose hope. Even when you get moved down to the “B” team in U-12s. Even when you don’t make McLean Soccer Club the first time you try out. Try out the next year, even when you are embarrassed and nervous and don’t want to. Try out and learn as much as you can from your coaches. You’ll just happen to meet your best friends there as well.”

Spoiler alert: She made the McLean SC team on the second try and would go on to play Division I soccer, win an NCAA title and play in a FIFA U-20 Women’s World Cup. 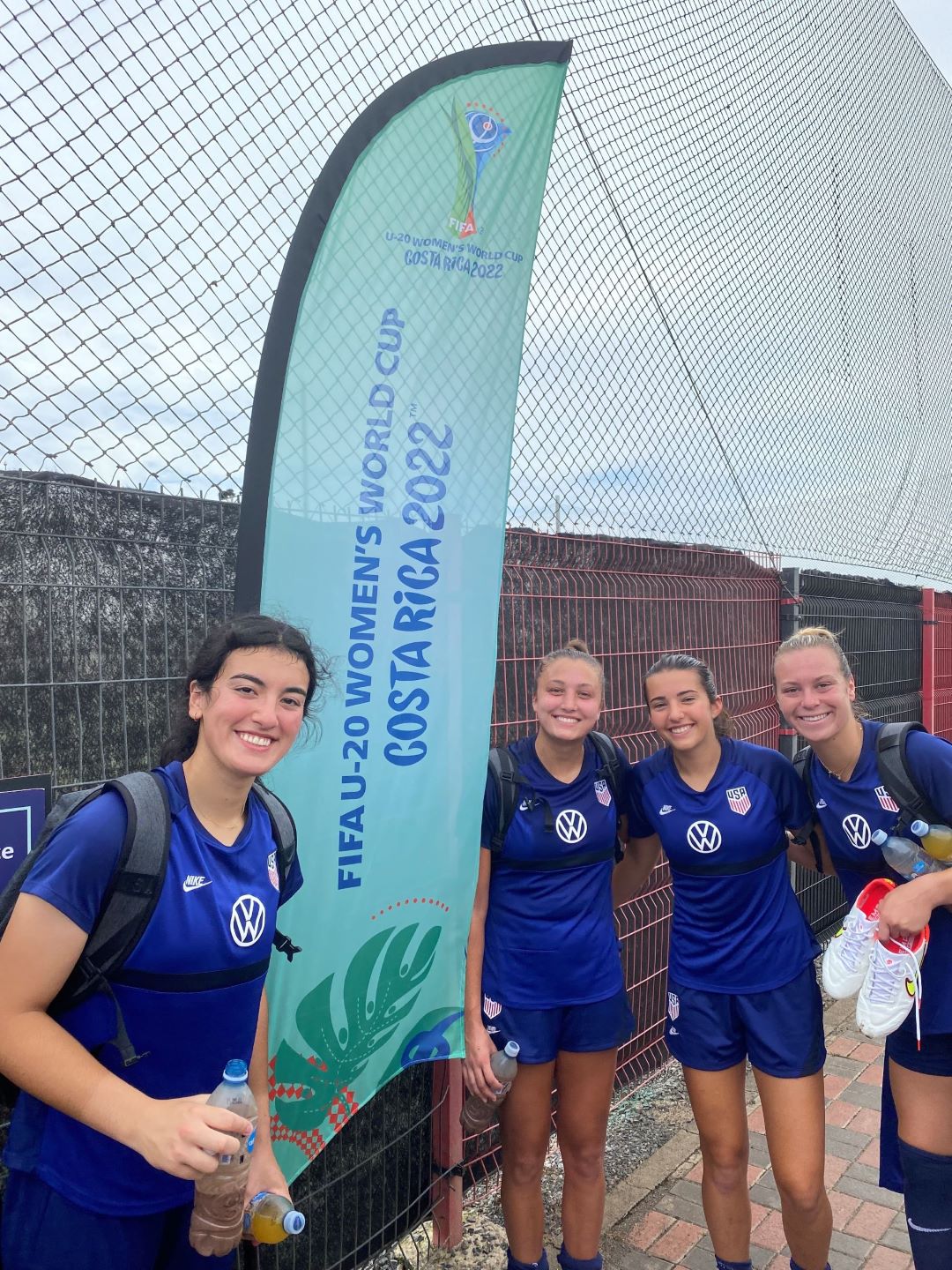 “I wasn’t necessarily bad when I was younger, I just wasn’t very strong technically and I wasn’t very fast,” said Flynn. “But I always loved soccer and I worked really hard. It just didn’t click for me for a while.”

It’s true that every player has a different path, and Flynn’s unfortunately took her through an ill-fated session of batting practice.

Her dad, wanting to see if there were perhaps some other sporting options for young Lauren, took her to the batting cages near her house. “I have a strong memory of going and trying to hit some softballs. But I asked my dad, ‘why are we here? I love soccer.’”

And that was the end of that. When she reached high school, she had a growth spurt, kept working hard, started improving and -- motivated by her older sister Meghan, who played soccer at the University of Tennessee -- decided soccer was her future. (In a bit of kismet, her current coach at Florida State, Brian Pensky, was Meghan’s head coach for the Lady Vols).

By her own admission, she was not highly recruited and had trouble choosing a college.

Flynn visited Florida State for a soccer camp, loved it, felt comfortable with the coaches, and even though it was far from home in Arlington, Va., made her choice.

When Flynn entered college in the fall of 2020, she had never played defender. She was a forward -- a winger, to be exact. After COVID cancelled the traditional fall soccer season, then Florida State head coach Mark Krikorian called Flynn into his office before the start of the adjusted spring season to gauge her temperature on switching to center back.

“It was a hard transition to college in general and to center back in particular,” Flynn admitted. “But the coaches at Florida State taught me so much and playing with fantastic players was the perfect experience to help me grow. I was very surprised when they asked if I wanted to change positions, but I was like ‘of course,’ I wanted to do anything to get on the field. It was very different seeing the field from different angles, but I spent so much time going over film with the coaches and working on it, and they were patient with me.”

Flynn is what you might call “a late bloomer” and during the spring season, in which Florida State made it to the National Championship game before falling to Santa Clara, she began to blossom.

She saw action in 15 games, starting just six, in what was her freshman year. As a sophomore, playing next to U.S. Under-23 international Emily Madril, perhaps the top defender in all of college soccer that year, she started all 25 games, was second on the team in minutes played (behind only Madril) and helped the Seminoles win the NCAA title.

She was now blooming like an orchard of American dogwood (which is Virginia’s state flower, BTW). 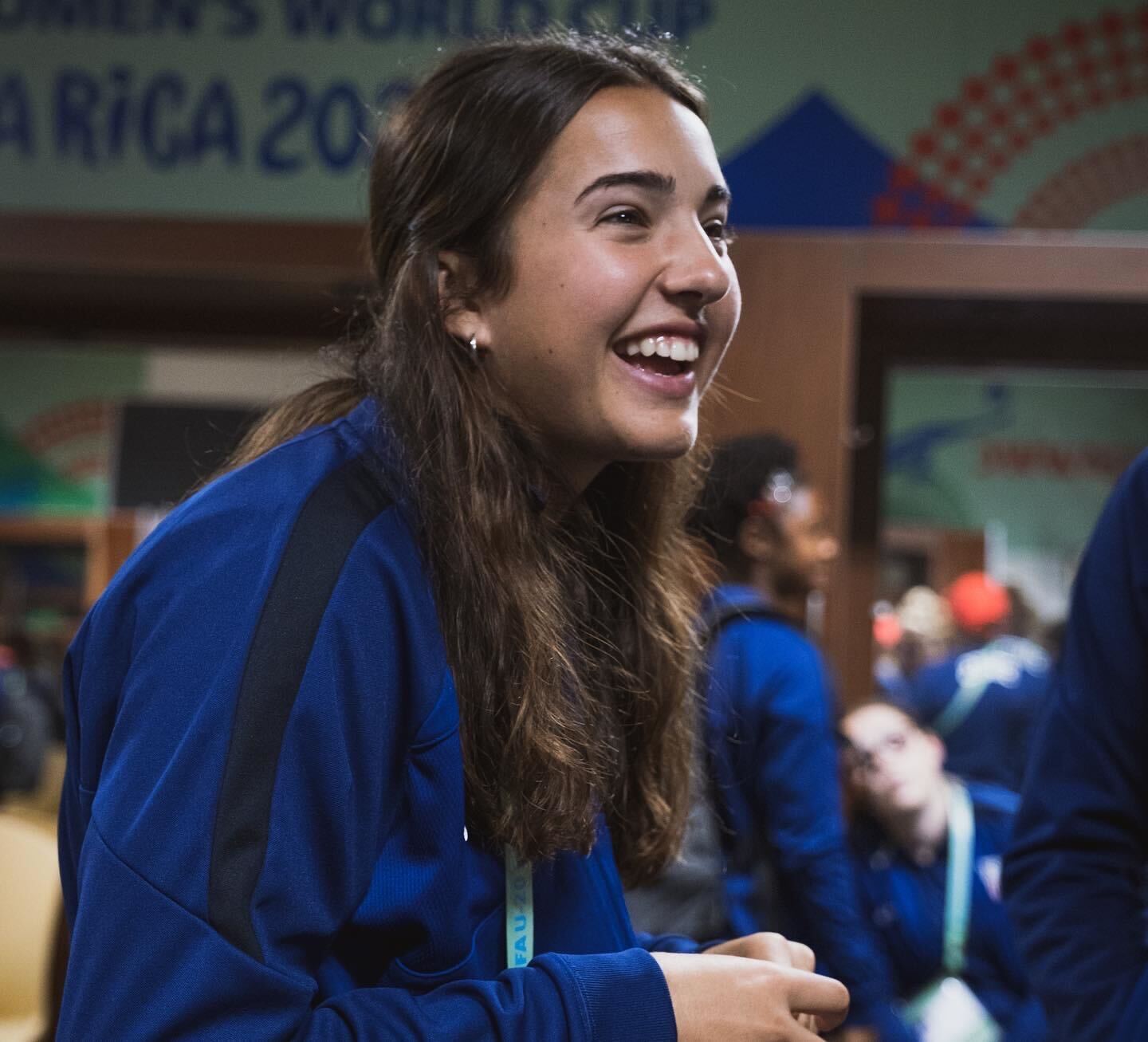 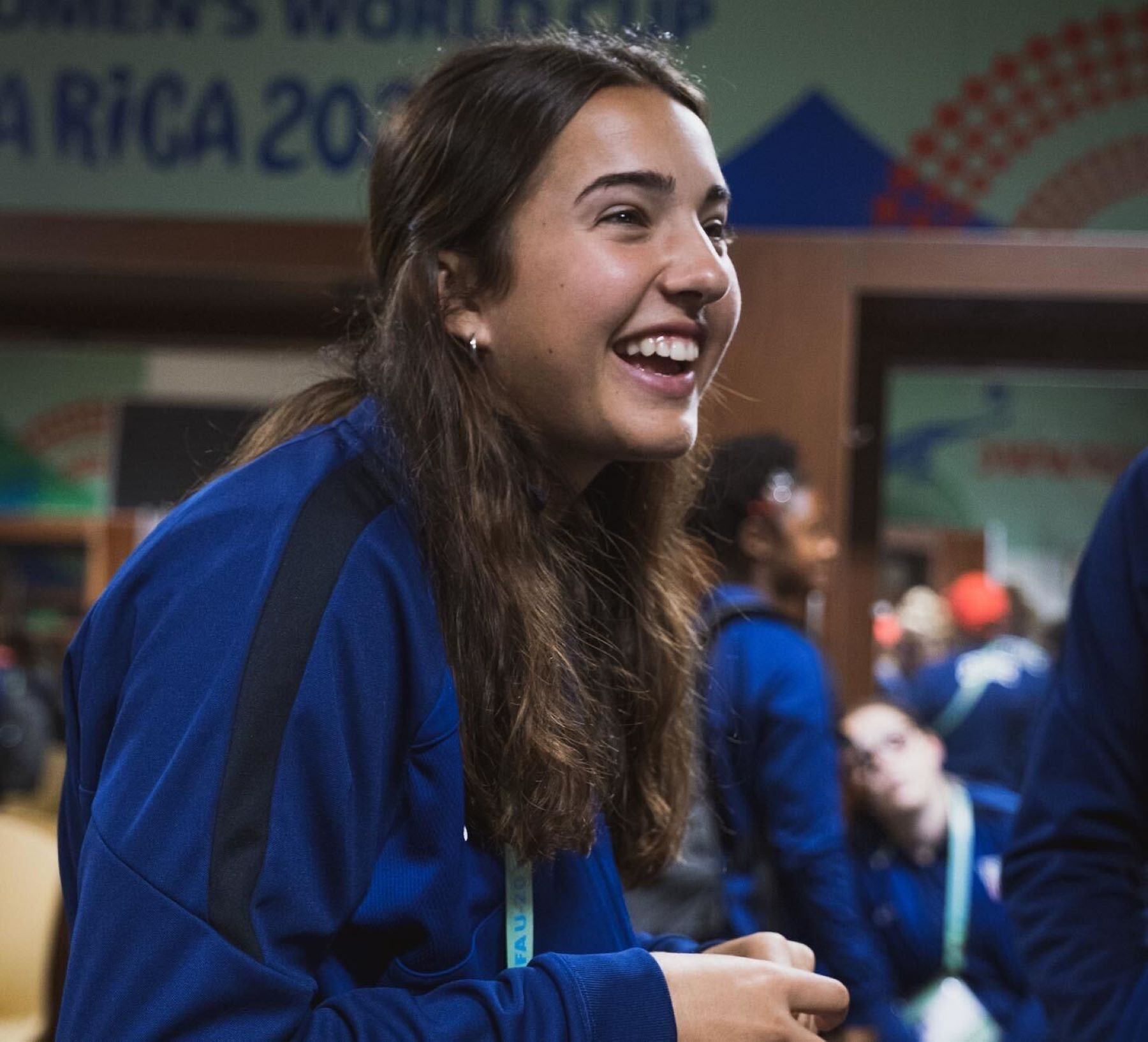 “Emily was like my mother on the field, she would tell me everything to do,” said Flynn. “Playing center back carried way more responsibility and required way more communication. I was kind of quiet when I first got to school so that was a big step for me, but I ended up really liking it, even more than playing forward. There’s something gratifying about helping to lead the team, organizing the players, winning a tackle, or playing a good through ball. I think that’s as much fun as scoring a goal.”

During that 2021 college season, Kevins was looking at a multitude of players as she prepared to kick-start the cycle for U-20 Women’s World Cup qualifying. That process included talking to many college coaches about players who were perhaps off her radar but should have been on it. The Florida State staff suggested she take a gander at Flynn. She did and she liked what she saw.

Flynn was invited into U-20 training camp in December of 2021. It was her first-ever National Team camp at any level, and because BYU got to the NCAA Championship game, and the match needed to be played on Monday, Flynn arrived late to training camp and was a few days behind everyone else. No matter. She played freely and with confidence.

“Lauren demonstrated great composure on the ball, a real willingness to learn and a strong drive at high a competitive level,” said Kevins. “She really adjusted quite quickly to the level, which obviously for a player who hadn’t play the environment before, was particularly heartening. She’s a player that approaches challenges with a growth mindset and just wants to get better every day.”

“Internally, I was very nervous going into National Team camp, but coming off the national championship game gave me some extra confidence,” said Flynn. “Being in an environment like that for the first time, I didn’t know what to expect.  It was very intimidating, but a lot of that is just inside your head. Once you realize you’re just there to do the thing you love, and that making yourself nervous is only going to hurt you in the end, that shift in mentality helped me a lot.”

“Even in the France camp [which was held in June and was the last event before the World Cup roster was chosen], I was very much in my own head, super stressed and not performing so well. The coaches talked to me, and Tracey told me that I was going to make mistakes and that it was okay. I would make a mistake and shut down, but she said mistakes will happen and it’s more about how you react to them. It’s advice that is so much easier said than done, but you can get to that place with experience and maturity, and I’m in a good place now although I know I have a lot of room to grow.”

She impressed enough in the December camp to make the Concacaf qualifying team, played in six of the seven games in the Dominican Republic, was invited on the France trip and eventually was named to the World Cup roster.

How she found out she had reached the pinnacle of her sport for her age group is another story. 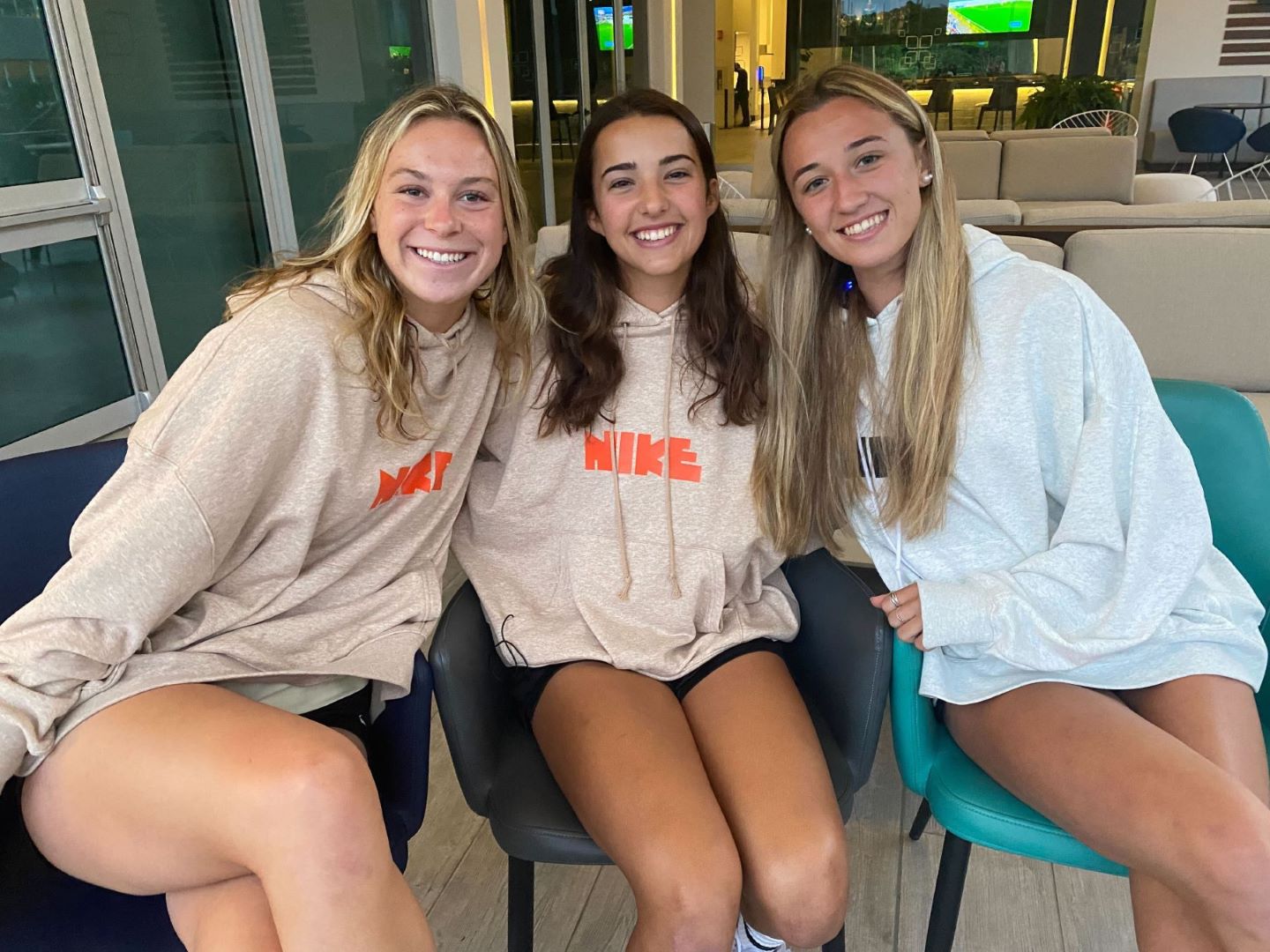 This summer, Flynn was training with Washington Spirit Reserves and in late July was playing with the Spirit’s First Team while their USWNT players were away at the Concacaf W Championship in Mexico. She was driving home from the Spirit’s training base in Leesburg, Va., a 40-minute trip back to Arlington, when her phone rang in the car. It was Kevins. Not wanting to give players good or bad news while they are driving, Kevins told her she had some news, but to not stress out, and call her back when she got home.

“Drive safe,” were her last words before they hung up.

Flynn is no dummy. She felt the good vibes on the call. Her mood soaring with the prospect that she’d made the World Cup Team, and with some great tunes on the radio, she headed home, but just as she exited the highway, the truck in front of her slammed on the brakes. So did Flynn, but not before she screeched to a halt and bumped the truck. It was a classic -- but ultimately very minor -- fender bender.

Fortunately, she was not hurt, and the truck barely had a scratch, but her mom’s car certainly suffered a few. She had one other problem: She had not told her mom she was taking her car – an electric vehicle -- to Spirit practice.

“It’s a long drive and I didn’t want to pay for gas!” said Flynn, mounting a defense that may not hold up in the Court of Mom.

One more problem: She would be delayed getting home to call Kevins to get confirmation on making the World Cup roster.

When she finally got home, called Kevins, and got the good news, it dawned upon her.

Is there a better day for a teenager to basically steal her mom’s car -- and then get in a “tiny” accident -- than on the day she makes the World Cup Team?

She then called her mom: “Mom, I’ve got some good news, and some bad news.”

“Bad news first,” said Debby Flynn. Lauren told her, and as she’d surmised, the good news more than smoothed over the bad. That said, Lauren is now banned from driving her mom’s car.

“After that, it was back to the stick shift,” said Flynn, who is now driving her soccer career to places she never thought they would go as a young player for her local club’s B-team.

It was quite an ascension from a reserve college freshman forward in the fall of 2020 to a starter at center back in the World Cup in the summer of 2022. And just as she promised her 12-year-old self, she’s enjoying the journey.