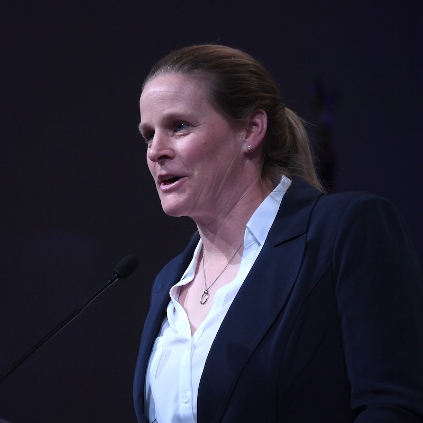 Cindy Parlow Cone is first female President of U.S. Soccer, the second sitting National Soccer Hall of Fame inductee and the first to hold the position who played for a senior U.S. National Team. Cone was elevated from Vice President to President of the U.S. Soccer Federation on March 12, 2020. She is also one of only seven female federation presidents across FIFA’s 211 member associations (as of March 15, 2022).

She was first elected Vice President of U.S. Soccer in February of 2019 at the U.S. Soccer Annual General Meeting and served in the position for a year, completing the term that was vacated. She then was re-elected to a full, four-year term at the 2020 AGM in February.

While leading the Federation back to resuming programming through the COVID-19 global pandemic, which began just a month after her being elevated to President, Cone’s priorities included focusing on improving U.S. Soccer’s efforts to take meaningful action in the diversity, equity, inclusion and belonging space, bringing commercial rights back in house, team building, and leading efforts to grow the game in all its forms.

Cone was then re-elected as U.S. Soccer’s President during the National Council Meeting at the Federation’s Annual General Meeting in Atlanta on March 5, 2022, after earning 52.9 percent of the weighted vote in a two-candidate race.

Cone is a title-winning coach at the grassroots, collegiate and professional levels and holds a USSF “A” coaching license. During the past 20 years, she has served on numerous committees, including the FIFA Steering Committee, the U.S. Soccer Medical Advisory Committee, Appeals Committee, and the Athletes’ Council.

The Memphis, Tennessee native was a star for the U.S. Women’s National Team during a career that spanned 1996-2004, earning 158 caps while scoring 75 goals, which still stands as 8th all-time on the USA’s all-time goals list. Her seven career hat tricks are still second all-time behind Mia Hamm and Carli Lloyd. She also had 35 career assists. In 1998, she won U.S. Soccer’s inaugural Young Female Player of the Year Award.

At 5-foot-11, she was a towering presence on the USA’s forward line. During her career she was a two-time Olympic gold medal winner (1996 & 2004) and a member of the historic 1999 Women’s World Cup winning side, scoring two goals in that tournament including a diving header against Nigeria in group play and the crucial opening score in the 2-0 semifinal victory against Brazil.

She played her last match for the U.S. WNT on Dec. 8, 2004, in a 5-0 win against Mexico at The Home Depot Center in Carson, Calif., in what was also the final match for Mia Hamm, Julie Foudy, Brandi Chastain and Joy Fawcett (who was on the bench but did not play).

She is the youngest player ever to win both an Olympic gold medal and a Women's World Cup title. In total, she played in nine Olympic matches and 11 World Cup matches. In 2000, she led the USA with 19 goals, which was her career high in a calendar year. She had four hat tricks that year, one shy of a U.S. record for a single year.

She also played for the USA’s youth National Teams and played three seasons in the WUSA, the USA’s first women’s pro league, advancing to two championship games with the Atlanta Beat.

Inducted into the National Soccer Hall of Fame in 2018, Cone was a four-time All-American at the University of North Carolina, score 68 goals and 53 assists in 103 games, and was on teams that won two NCAA titles. She won both the Hermann Trophy and the M.A.C. Player of the Year awards as the consensus college soccer player of the year as a junior and a senior, which at the time, paired her with Mia Hamm as the only two time winners of both awards. Cone was also pioneer of sorts for college soccer, entering UNC early after three years of high school. She majored in Education at UNC.

She also served as an assistant coach at UNC, winning four NCAA titles, including 2012 when she took coaching lead due to an illness to head coach Anson Dorrance’s wife.

She was also the first head coach to win a National Women's Soccer League championship, guiding Portland Thorns FC to the title in 2013 during the league's inaugural season.

Cone is on the board for the non-profit Goals for Girls, an organization that uses “soccer to teach leadership skills in young women and teach them how to be agents of change, in their own lives and in their communities.”

She is currently the Girls’ Director for NCFC Youth in the Durham-Chapel Hill area.

In the summer of 2007, she married John Cone in Chapel Hill. She has a street – Cindy Parlow Drive – named after her in her hometown of Memphis, Tenn.