Teams from MLS (21) join the #USOC2019 party this week with 16 Fourth Round games across the country on Tuesday and Wednesday.
Jonah FontelaJune 10 2019
Open Cup

The Fourth Round of the 2019 Lamar Hunt U.S. Open Cup marks the moment when most amateur dreams turn to dust. The entrance of 21 U.S.-based Major League Soccer (Division I) clubs usually spells doom for any remaining part-timers and many of the USL (Division II) pro sides who’ve done well to make it so far. Cupsets are not unheard of however, and a good number of lower division teams have made Quarter and Semifinal runs in recent editions of U.S. Soccer’s National Championship.

There are 16 games in total (eight on Tuesday, June 11 and eight more on Wednesday, June 12). Until the final whistle goes, anything is possible…

Amateur Dreams Alive in the OC

All eyes will be on Carson, California and the late game on Wednesday. Orange County FC – the lone remaining amateur side still kicking – face off against two-time tournament winners LA Galaxy [WATCH]. OCFC play their league games in the National Premier Soccer League (NPSL) and are coached by U.S. National Team legend Paul Caligiuri. So far, they’ve been relishing the role of giant-killer with a pair of wins over USL Championship sides Orange County SC and Eric Wynalda’s Las Vegas Lights, while on the road in the Third Round.

Few gave @NPSLSoccer amateurs @ocfcsoccer a chance against @USLChampionship pros @lvlightsfc, but that didn't stop the part-timers as they roared to a 5-3 win & a date with an @MLS team in the Fourth Round.


Blake Frischknecht, Cody Shelton and Dakota Collins have been outstanding for the California amateurs, who are hoping to add to their growing list of Cupsets with one more against Coach Caligiuri’s old team (he finished his pro career winning the Open Cup Final with the Galaxy in 2001). “The psychological preparation for an amateur side at this stage of the U.S. Open Cup is totally different than what’s going on with the pros,” said Caligiuri. “I’ve been a part of championships at home and abroad, but there just seems to be something so special about what we’re doing in the Cup with Orange County Football Club.”

There are nine Fourth Round contests that pit second division USL Championship teams against opposition from the top-of-the-heap Major League Soccer.

Columbus Crew hope to avoid a third straight loss in the Fourth Round when the Pittsburgh Riverhounds come to town [WATCH]. The visitors boast a well-balanced squad, bolstered by the recent development of 22-year-old home town midfielder Robbie Mertz, who recently scored his first goal for the club. “These games are intense and they need a winner,” said the former University of Michigan All-American. “Up against the Crew, we’re the underdogs so we can play free.”

Robbie Mertz recently got his first goal for the Riverhounds

READ MORE: No Place Like Home for Riverhound Mertz

The Charleston Battery is a famous name in the Open Cup as they’re last side from outside MLS to reach a Final (in 2008). Their coach now, as then, is Mike Anhaeuser and he believes his squad have a chance up against MLS’ Atlanta United for the second straight year at this stage of the competition (and third straight overall) [WATCH]. “The Open Cup is huge – it’s always that way at this club,” said the long-time Battery boss. “But we won’t get anything out of Atlanta United unless we’re hungry.”

READ MORE: Anhaeuser – “It Can Be Done”


Houston Dynamo started their MLS campaign well and, as last year’s Open Cup holders, they’ll have every confidence that they can get the better of their visitors in the Fourth Round: Austin Bold, a first-year USL Championship team out of the capital [WATCH]. The Dynamo’s DaMarcus Beasley is playing in his last season before retirement and he’ll want to go out with some more silverware under his arm. That said, the Bold’s Nigerian veteran Promise Isaac, who captained a team to Olympic silver in 2008, has his own ideas. “This is the Cup,” said the three times-capped Nigerian who played over a decade in Turkey. “What’s great about it is upsets can happen. We’ve got nothing to lose.”


Saint Louis FC (USL Championship) and Chicago Fire (MLS) meet in a clash of two cities with long histories in American soccer’s oldest tournament [WATCH]. The Fire – Semifinalists last year – are clear favorites, but the men from Missouri have looked sharp in their two Cup wins over Des Moines Menace and USL League One side Forward Madison.


Coach Simon Elliot leads Sacramento Republic (USL Championship) into action against the San Jose Earthquakes (one of his former MLS clubs) in hopes of pulling off a big upset [WATCH]. Elliot, a winner of the Open Cup in 2001 with LA Galaxy, knows what it takes to shock a favorite. “Playing an MLS team is always a challenge,” he said. “But it’s one game and, like they say, anything can happen.” 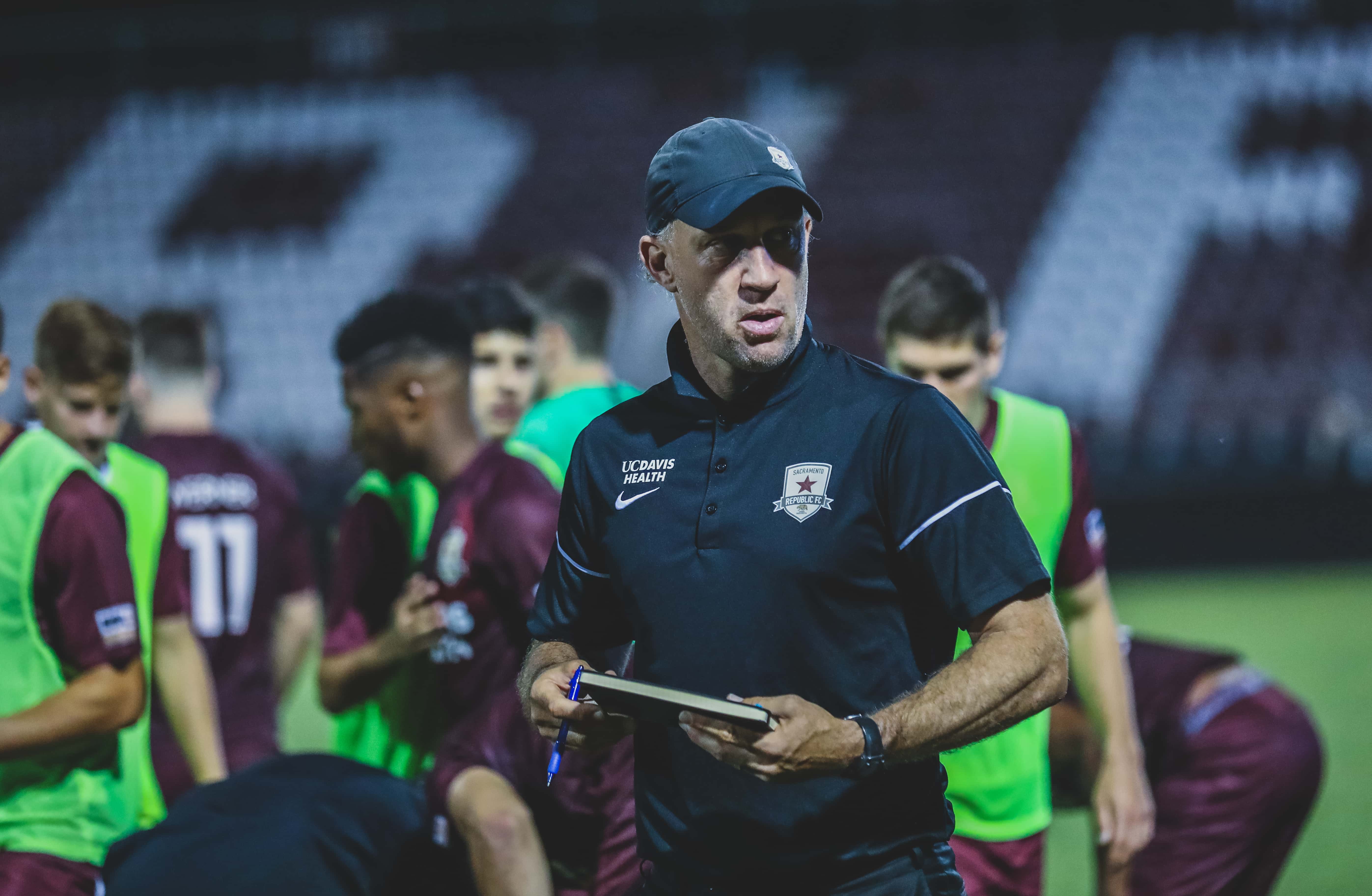 North Carolina FC head up to the Big Apple for a first-ever game against New York City FC [WATCH]. NCFC are coached by former U.S. National Team boss Dave Sarachan and welcome back midfield schemer Nazmi Albadawi from a stint away at FC Cincinnati. The men from Cary, NC are riding a wave of good vibes after handing USL Championship leaders Tampa Bay Rowdies their first league defeat of the year at the weekend.

“We need to be steady,” said local hero Albadawi, a part of the NCFC side that beat LA Galaxy in the 2014 Open Cup. “In the end, it’s another soccer game and we can’t put too much hype on it.

FC Cincinnati and Louisville City FC meet in a game once known as the River City Derby [WATCH]. It’s the first meeting of the two teams sine FC Cincy – Semifinalists in the 2017 Open Cup – graduated to Major League Soccer. Louisville City are back to back reigning champs of the USL Championship and last year their run to the Open Cup Quarterfinals was the best result for any team from the second division. 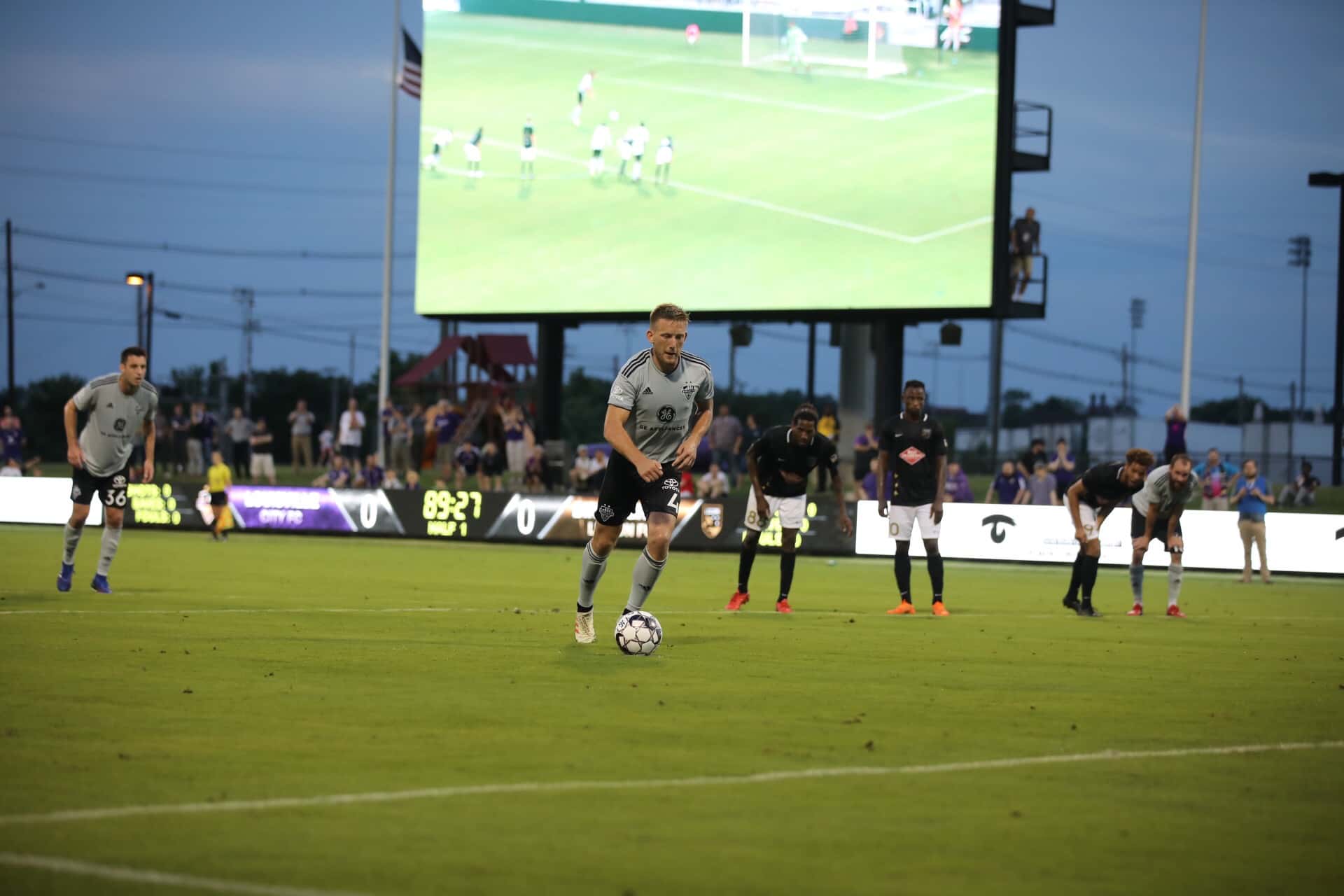 FC Dallas are always dangerous in Open Cup play and the 2016 champs welcome OKC Energy in their Fourth Round contest [WATCH]. The Oklahomans won’t be overly fearful as they knocked out heavy favorites Tampa Bay Rowdies in the last round in a game that produced seven goals (4-3). “It’s our plan to go to Dallas, win and advance,” said OKC – and former Dallas defender – Atiba Harris. “After it’s over, we can all be friends again.”

There will be five all Major League Soccer-affairs due to the large number of U.S.-based teams in the top flight (21). The New York Red Bulls – still aiming for a first major trophy after 23 years as a club – open at Montclair State University in New Jersey, playing hosts to the New England Revolution, whose 2007 Open Cup crown remains the Boston area’s club’s only major silverware in the Revs’ 23-year history [WATCH]. 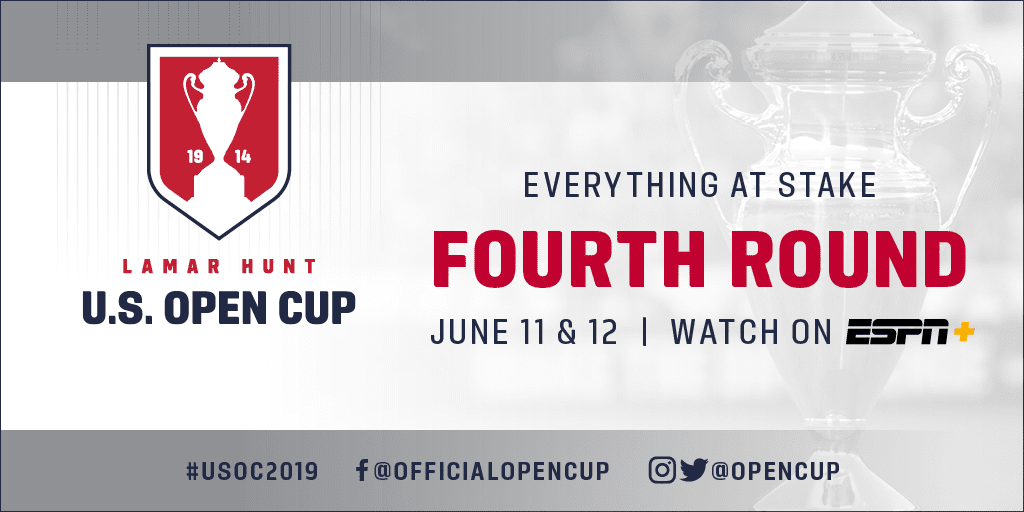 Minnesota United open the doors to their brand-new Allianz Field in Saint Paul to take on Sporting Kansas City [WATCH]. Since their founding in 2017, Minnesota have had precious little glory in the 106-year-old Open Cup. They tumbled out at the first hurdle in their inaugural 2017 campaign, before winning one and going out in the 2018 Round of 16. The draw didn’t do them any favors this year, as playing host to Peter Vermes’ SKC who’ve won two of their four Open Cups in the last four years. A big home crowd at the new ground might be just what the doctor ordered for the Minnesotans.

Real Salt Lake welcome an LAFC side that are out for glory this year after losing a heart-breaker to Houston Dynamo in the 2018 Semifinals that would have seen them host the Final had they advanced [WATCH]. LAFC boss Bob Bradley has two Open Cups to his name from his time at Chicago Fire and several members of his current team – like Latif Blessing and Walker Zimmerman – have recent experience hoisting the trophy for other clubs. “Everywhere I’ve been I’ve made it a point to take the Open Cup very, very seriously,” said Bradley. “LAFC’s no different and we’re going to really go after it.”

Last year’s runners-up Philadelphia Union travel to Audi Field to take on Wayne Rooney and three-time Open Cup winners D.C. United [WATCH]. The Union, led by two-time winner Jim Curtin, are desperate for the Cup this year, after playing so many years as bridesmaids. They lost the Final in 2014, 2015 and again last year on the road in Houston.

The fifth and final all-MLS derby is a clash of close rivals in the Pacific Northwest. Four-time Open Cup winners Seattle Sounders host 2015 MLS toppers Portland Timbers in Tacoma for a tie that has seen sparks fly on a number of occasions in recent Open Cup matches [WATCH].

All games of the 2019 Lamar Hunt U..S. Open Cup are broadcast at ESPN+. ussoccer.com is the official website of the Lamar Hunt U.S. Open Cup, and will provide a stream of all 16 games of the Fourth Round. Comprehensive video and written coverage of the tournament will also be available. You can follow the Open Cup on Twitter and Instagram @OpenCup and Facebook @OfficialOpenCup.