Watch USA-Canada from Exploria Stadium in Orlando on Friday, Nov. 15 at 7 p.m. ET on ESPN2, UniMás and TUDN
November 14 2019
On the Pitch

CHICAGO (Nov. 14, 2019) – Exactly one month to the day following the USMNT’s disappointing 2-0 defeat to Canada in Toronto, the side will get a chance at payback when it hosts Les Rouges in a Concacaf Nations League A, Group A rematch on Friday, Nov. 15 at Exploria Stadium in Orlando, Fla. Coverage of USA-Canada begins at 7 p.m. ET on ESPN2, UniMás and TUDN.

The USMNT has had a month to think about the 2-0 defeat to Canada in its second match of the Concacaf Nations League group stage. The result was the first blemish on the USA record against Les Rouges in more than 34 years and one the players will have in the back of their minds on Friday.

“It was a tough game and it’s time to respond,” 21-year-old defender Reggie Cannon said of the 2-0 defeat. “This is real. This is football. Things like that happen. These setbacks happen, but it’s how you respond to them that really shape your career and shape this team as a whole. I think this team is ready to respond.”

WIN TO GET IN

Holding its destiny in its own hands, the path for the United States to advance to the knockout stage of the inaugural Nations League is clear: win both remaining matches and achieve a superior goal differential. Canada is on top of the group with nine points and a plus-nine goal differential, largely on the strength of scoring seven times in two games against Cuba. The U.S. notched seven of their own the first time around against Cuba and will need to keep their foot on the gas. First up, however, is a massive rematch against the Canadian team that ignited their home crowd and support across the nation with a 2-0 win on Oct. 15 in Toronto, their first against the United States in more than three decades. The Canadians have been on a roll since the appointment of John Herdman as head coach in 2018, compiling a 10-2-0 record overall in that time and a 6-2-0 mark in 2019.

While this pool of players continues to gain international experience – seven of them played their first away match in Concacaf official competition last month in Toronto - the USMNT is no stranger to the away-home scenario in group play. In the semifinal round of qualifying for the 2014 FIFA World Cup, the U.S. played and lost in Jamaica before returning home four days later and collecting a 1-0 win in Columbus. Four years later, it was the same circumstance and the same outcome against Guatemala, only this time the Columbus faithful witnessed a 4-0 shutout.

While the Nations League isn’t exactly the same as the old semifinal round of World Cup qualifying, it does offer some insight into how teams deal with defeats at this stage of the process and their prospect of advancement. Going back to the 1998 World Cup Qualifying cycle, 14 of the 18 Concacaf teams that qualified for the World Cup lost at least one away game during the semifinal round, demonstrating that these are common bumps in the road on the way to earning a place at the FIFA World Cup.

While the Concacaf Nations League isn’t exactly World Cup Qualifying, with its timing and similar format, the group stage has essentially replaced Concacaf’s old semifinal round of the qualifying process. As the USMNT continues to build as a group and in its style of play, the relative youth of the squad is important to remember.

Since the formats and timing are similar, age and experience comparisons to previous World Cup Qualifying cycles back up that the current crop of USMNT talent is greener than earlier cycles. For instance, at 24 years, 350 days, the starting XI for last month’s 7-0 win against Cuba was the youngest for the USMNT in a competitive, group-stage match during the modern era. The average of 23 caps was also the second youngest of the modern era.

In the Oct. 15 match at Canada, the starting XI’s average 25 years, 219 days and 25 caps was the youngest for the USMNT in an away, competitive group-stage match where the team hadn’t already advanced to the next round. Additionally, seven of the 14 players who appeared for the USMNT in Canada were playing in their first competitive road match for the USMNT.

Originally set to be part of the roster for the November matches, attacker Christian Pulisic and veteran midfielder Michael Bradley were both forced to withdraw from the squad due to injuries suffered with their clubs during the weekend.

Scoring his fifth goal in as many matches for Chelsea in Saturday’s 2-0 win against Crystal Palace, Pulisic suffered a hip injury. The USMNT held out hopes that the 21-year-old would be able to join the team for this month’s games, but made a collaborative decision with the club to allow him to stay in England.

Bradley went the full 90 minutes in Toronto FC’s 3-1 defeat to Seattle Sounders FC in Sunday’s MLS Cup Final, but picked up a right ankle injury during the first half, leaving him unable to join the squad in Orlando.

Following conversations with Fortuna Düsseldorf, Steffen was left off the roster last week after experiencing ongoing tendonitis in his left knee. The issue had been a concern for several weeks and impacted him during the last international window. At this stage it doesn't prevent him from playing matches – Steffen played in the club’s 3-3 draw with Schalke at the weekend -- but the player has been limited in training. Like the Pulisic decision with Chelsea, the choice to allow Steffen to gain additional rest was made collaboratively with his club and done with the long-term health of the player in mind.

This will be the USA’s sixth visit to Orlando and the third since the opening of Exploria Stadium. A near 20-year gap began following a 1-0 win against Sweden in 1998. Then in 2017, the United States returned to overwhelm Panama in a 4-0 World Cup Qualifying win in front of a sellout crowd of 25,303 fans. Most recently, an 81st minute strike from Gyasi Zardes earned the United States a 1-0 shutout victory against Ecuador on March 21. With the win, Gregg Berhalter became the second USMNT head coach to begin his tenure with three straight victories.

Set to manage his 17th match on Friday against Canada, a win would see Gregg Berhalter become the second-fastest USMNT manager to achieve double-digit victories after only Bob Bradley, who achieved his 10th win in his 11th match as head coach in 2007.


LEAGUE A, GROUP A

Drawn into Nations League A, Group A, the USMNT closes out the year with home and away matches against Canada and Cuba. Those countries faced off during the September window, with Canada earning a 7-0 win on Sept. 7 in Toronto before a 1-0 victory in Cuba’s “home” match on Sept. 10 in Georgetown, Grand Cayman. With those results, the USMNT will have the goal of equaling Canada’s six points by the end of the October window. 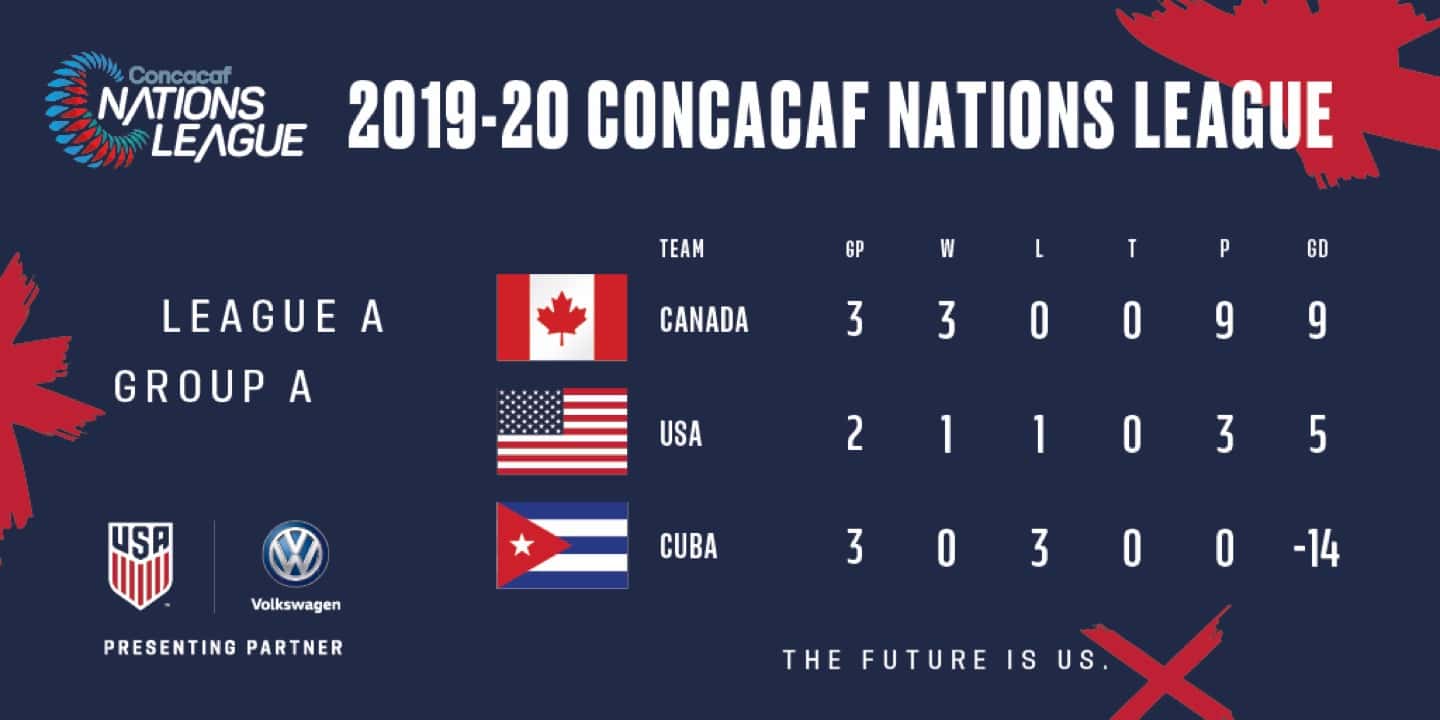 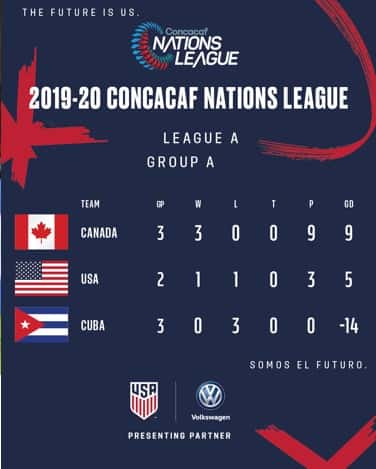 Another benefit of the Concacaf Nations League is the role it serves as a qualification tournament for the Concacaf Gold Cup. For the first time in tournament history, all 16 participants at the 2021 Concacaf Gold Cup will have gone through a qualification process that begins with the current edition of the Nations League. In League A, the top two teams from each group automatically qualify for the next edition of the confederation championship.

The USMNT can officially book its place to the 2021 Gold Cup with a win or draw on Friday against Canada.


WHAT IS THE NATIONS LEAGUE?

Similar to the recently launched UEFA Nations League, Concacaf’s version was created to maximize the quality, quantity and frequency of competitive matches for all of the confederation’s 41 Member Associations. Following a qualifying tournament that concluded earlier this year, teams were placed into one of three Leagues: A, B and C. From there, teams were drawn into groups within their specific leagues, with each group providing a home-and-away format which runs during the course of the September, October and November FIFA international dates in 2019. At the end of the round-robin competition, the League A and B teams which finish last in their groups will be relegated to the lower league, while the group winners in Leagues B and C will be promoted to the higher league for the next edition of the competition.

Additionally, the four group winners from League A will advance to the Knockout Round where a semifinal and final will be played during the June FIFA international dates to crown the 2019-20 Concacaf Nations League champion. The semifinal matchups will place the No. 1 seed vs. No. 4 and No. 2 seed vs. No. 3.

The tournament has major implication on future competitions as well. With Concacaf changing its World Cup qualifying format for the 2022 cycle, the top six teams in the FIFA World Rankings come June 2020 will advance straight to the region’s final round of qualifying, while those outside will have to play a longer, drawn out format for the chance to go to Qatar in 2022. The Nations League also will serve as qualifying for the 2021 Concacaf Gold Cup.