USA Stands First in the Octagonal Following 2-0 Win Vs. Jamaica in Austin, Texas; Kickoff from Estadio Rommel Fernandez in Panama City, Panama Set for 6 p.m. ET on Paramount+ and Universo
October 9 2021
On the Pitch

CHICAGO (Oct. 9, 2021)-- Following a strong 2-0 victory vs. Jamaica spearheaded by 18-year-old forward Ricardo Pepi’s two goals, the U.S. Men’s National Team will continue its World Cup qualifying campaign at Panama on Oct. 10 in Panama City. Entering the match undefeated and in first place in the Octagonal standings, USA-Panama is the USMNT’s second qualifying match in seven days this month and fifth match overall of 14 that will take place for Concacaf’s Final Round of World Cup qualifying.

Kickoff from Estadio Rommel Fernandez is set for 6 p.m. ET on Paramount+ and Unvierso. Fans can follow the USMNT during World Cup qualifying on Twitter (@USMNT), Instagram (@USMNT), Facebook and the official U.S. Soccer App.

Three players on the USMNT’s October roster did not travel with the team to Panama: goalkeeper Zack Steffen, defender Antonee Robinson and midfielder Weston McKennie. Robinson and Steffen did not travel due to the quarantine requirements for those returning to the United Kingdom, while McKennie experienced soreness in his right quadriceps and will focus on preparation for Wednesday’s USA-Costa Rica match, presented by Volkswagen. The USA closes its October stretch of three qualifiers in seven days vs. Los Ticos at Lower.com Field on Oct. 13 (ESPN2, ESPN+, UniMas, TUDN).

2-0 win against Jamaica on Thursday night. Playing its first World Cup qualifying match in Texas before a sell-out crowd at Austin’s Q2 Stadium, two second-half goals from Ricardo Pepi were the difference vs. the Reggae Boyz.

The U.S. dominated possession in the first half against Jamaica’s defensive low block while searching for a goal, and came out firing after the break. Pepi’s two goals came off otwo nice full-field attacking runs, the first sprung from goalkeeper Matt Turner and the back line before Sergino Dest teed Pepi up for the opener and when Brenden Aaronson provided the assist on the second.

After sparking the USMNT to a historic 4-1 win at Honduras last month with a goal and two assists, eighteen-year-old forward Ricardo Pepi continued his red-hot ways vs. Jamaica. The striker became the youngest player to score in back-to-back World Cup qualifying matches and the second-youngest to score multiple goals in a game behind only Christian Pulisic. Pepi’s 12 MLS goals also lead all U.S eligible players in the league this season.

Thursday’s match provided another opportunity for the young USMNT to gain valuable World Cup qualifying experience. The Starting XI was the second-youngest in team history at 23 years, 111 days, behind only last month’s match at Honduras. Pepi and midfielder Yunus Musah were the first 18-year-olds to start a qualifier together in team history.

Before this summer, goalkeeper Matt Turner and defender Miles Robinson each only had one appearance for the USMNT. Since then, they’ve played in 10 straight games for the USMNT, including every minute of World Cup qualifying, and have anchored the defense to seven clean sheets and just three goals allowed during an 8-0-2 run.

After making its first FIFA World Cup appearance last cycle, Los Canaleros enter Sunday’s match in fourth place in the Octagonal standings. Panama got off to an undefeated start in World Cup qualifying during the September window, kicking things off with a scoreless draw vs. Costa Rica before a nice 3-0 victory at Jamaica in Kingston and a 1-1 draw vs. Mexico.


Panama dropped its first World Cup qualifying match this cycle on Thursday night, falling 1-0 to El Salvador in San Salvador. After some nice early saves from goalkeeper Luis Mejia, Enrico Duenas netted the game’s only goal in the 37th minute off a rebound from Mejia and Los Canaleros were unable to respond. 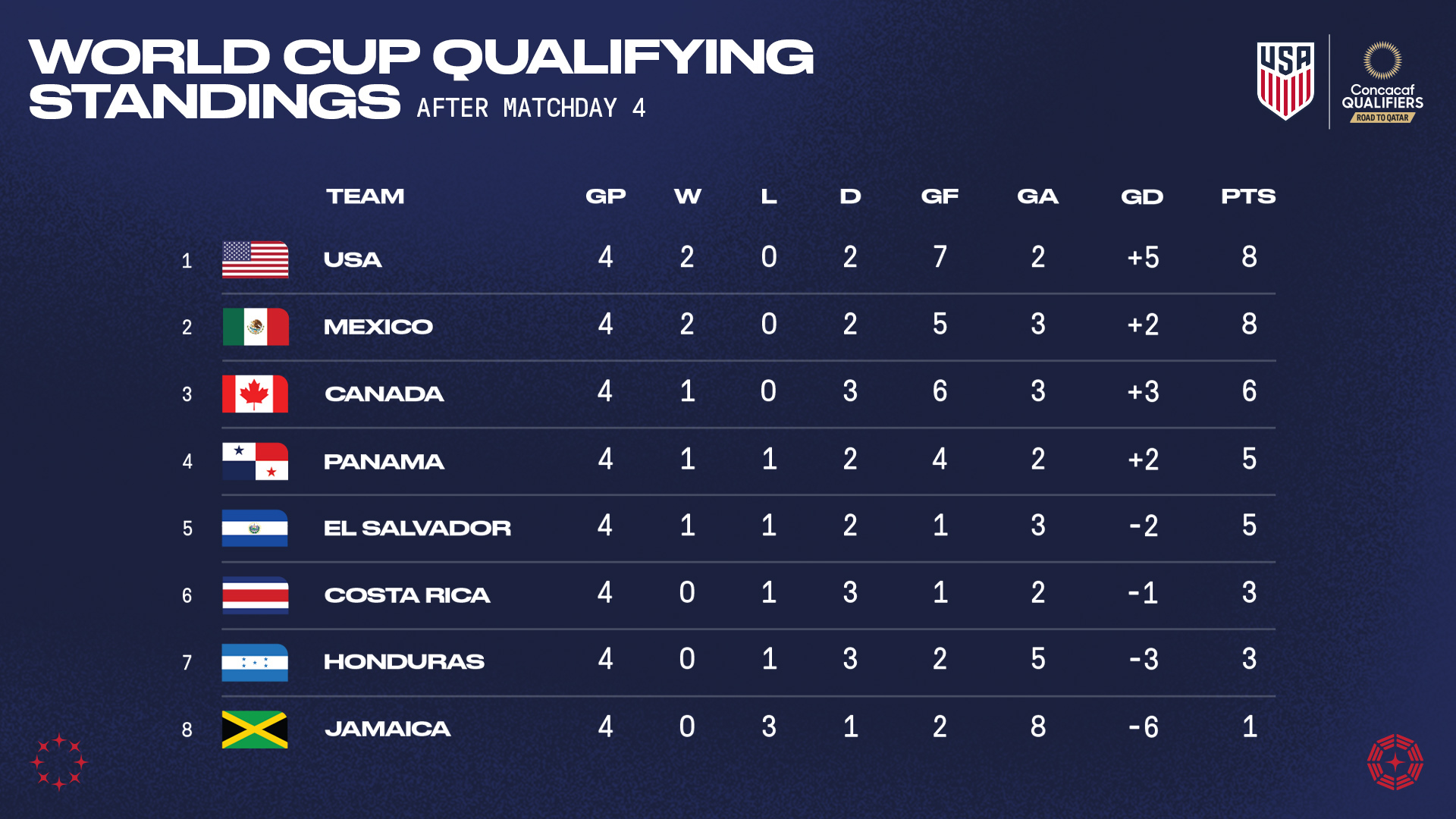