Then There Were Eight: #USOC2019 Quarterfinal Preview

ussoccer.com previews the Quarterfinal Round of the 2019 Lamar Hunt U.S. Open Cup, where Saint Louis FC and New Mexico United fly the flag for the underdogs, while LAFC and Portland Timbers meet in a heavyweight rematch.
Jonah FontelaJuly 8 2019
Open Cup
The four games of the 2019 Lamar Hunt U.S. Open Cup’s Quarterfinal Round will be played on Wednesday July 10 and decide who moves through to the penultimate Semifinal stage. Still alive are underdog darlings New Mexico United and Saint Louis FC of the USL Championship (Division II), and they’re both looking to become the first second-division team since FC Cincinnati in 2017 to reach the last four. Join us a for a closer look at this crucial clutch of games, where an LAFC-Portland Timbers heavyweight rematch is on the cards and Orlando City, New York City FC, Minnesota United and reigning 2018 MLS champs Atlanta United all try to reach new heights in the country’s oldest soccer tournament, now in its 106th edition. 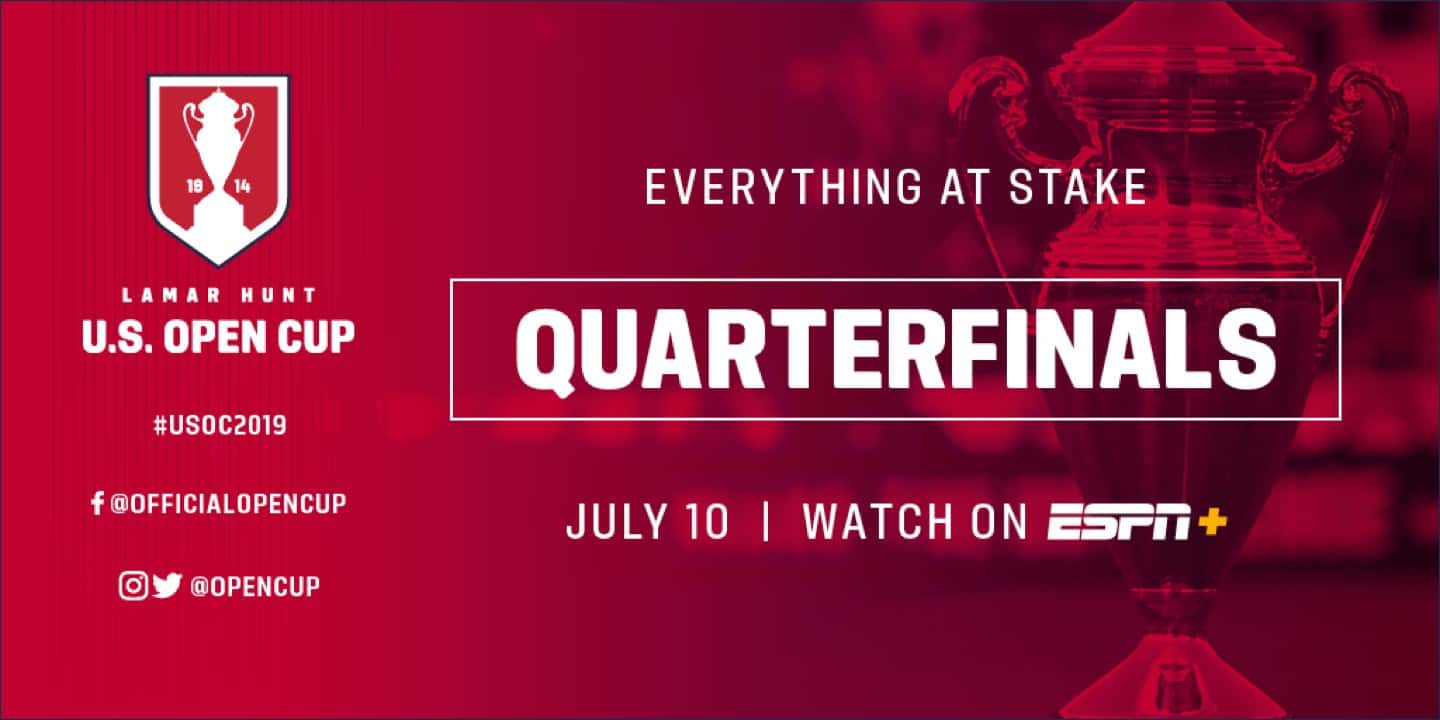 All Games live on ESPN+

One thing is certain: There will be a first-time winner of the U.S. Open Cup in 2019. None of the eight Quarterfinalists have reached a Semifinal before. The question remains: Who will it be? Join ussoccer.com for a look ahead at a quartet of interesting encounters in the Last Eight that will help clarify the matter.

Saint Louis FC hail from a city that’s produced six Open Cup winners through its rich soccer history. This, however, is the USL Championship club’s first trip to the tournament Quarterfinals. They bested MLS sides Chicago Fire in the Fourth Round and repeated the dose in the Round of 16 against FC Cincinnati. Now, this no-nonsense side led by coach Anthony Pulis and the likes of Russell Ciceroni and Guy Abend on the field, are up against the reigning champions of MLS – the formidable Atlanta United [WATCH]. The Georgia-based side have been led in the Cup by outstanding U.S. youth international Brandon Vazquez (with four goals in the last two rounds). 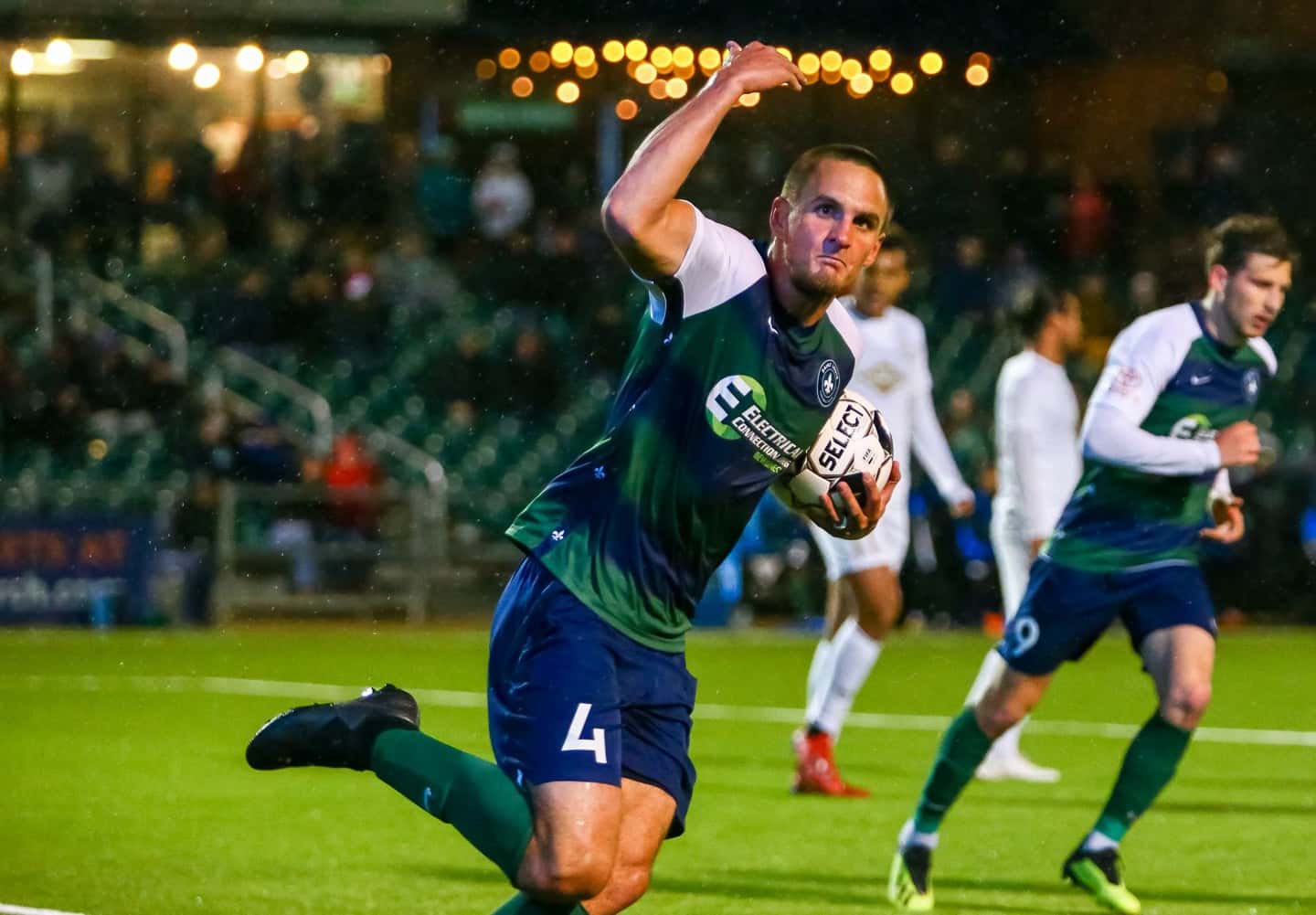 “Open Cup games are always intense – especially when you have a team going up against a team from a division above them,” said Sam Fink, Saint Louis FC’s inspirational captain and scorer of a late winner against FC Cincy in the last round. “That underdog is just going to keep coming at you and never let up because there’s something to prove.”

Elsewhere under the underdog banner is New Mexico United. Only a team for around six months, they’ve shown no signs of stage fright in the Open Cup. In the last two rounds they beat MLS opposition in the form of Colorado Rapids and 2016 Open Cup champions FC Dallas. The men from Albuquerque have played all four of their dramatic Cup encounters (three of them needed extra-time or a shootout) on the road and their army of traveling supporters has become the talk of the 2019 edition of the tournament. 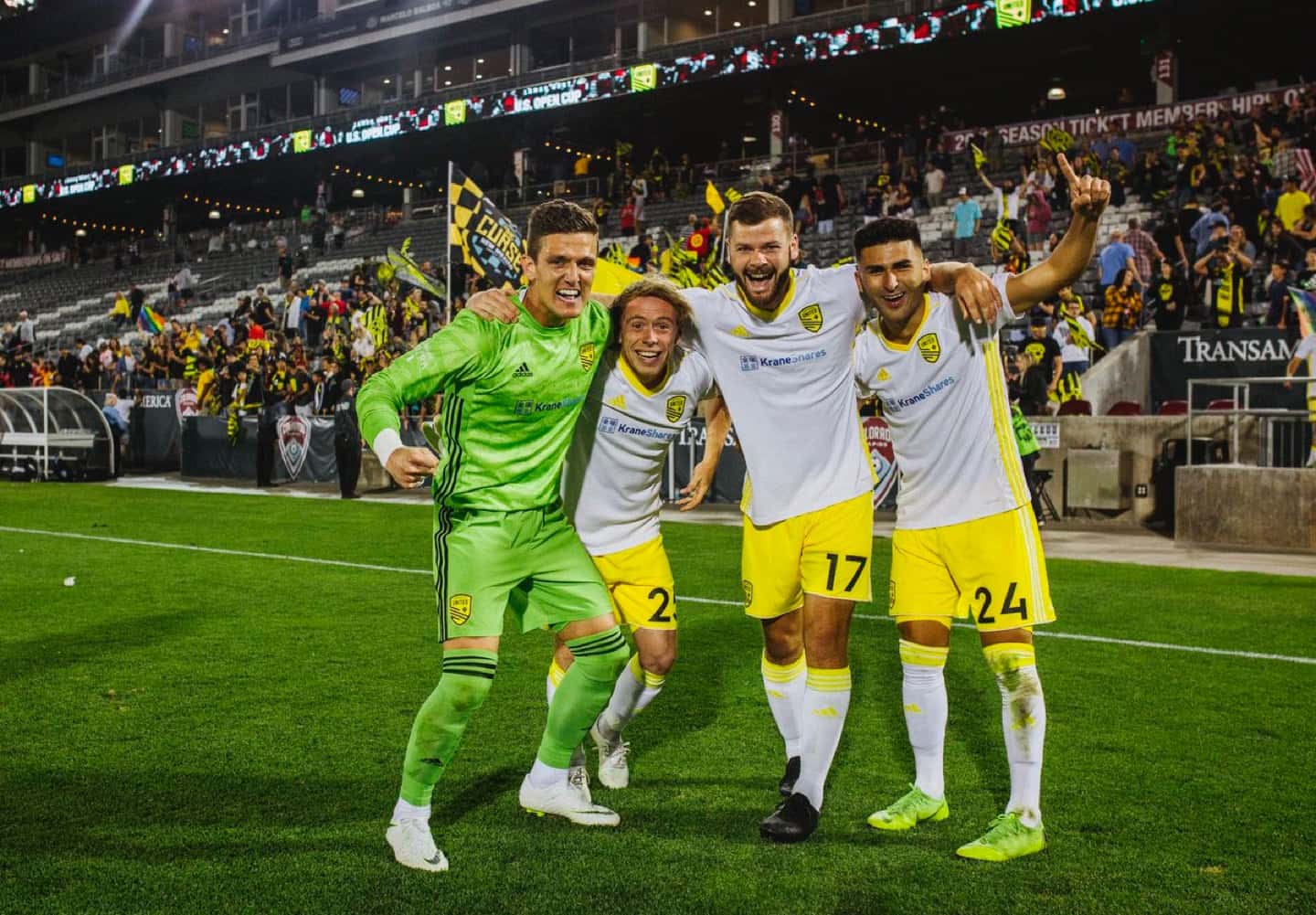 “It’s fun being the underdog,” said Devon Sandoval, striker and proud New Mexico local. “There may be some people out there dismissing us as just that team from New Mexico, but we’re going toe-to-toe with everyone and we’re seeing upsets happen. We’re leaving it all out on the field.”

In evidence that the party might be coming to an end, United haven’t won in their last five league games and, adding to their adversities, top attacker Kevaughn Frater – who scored crucial goals in their last two Cup games – is out after being issued a third yellow card of the competition. Minnesota United, playing at their brand-new Allianz Field in Saint Paul, are riding a wave of confidence after lopsided wins over 2017 champs Sporting Kansas City, 4-1, in the Fourth Round and then reigning champs Houston Dynamo last time out (3-2). Four goals in his last two games make Darwin Quintero the man to watch for MNUFC [WATCH]. 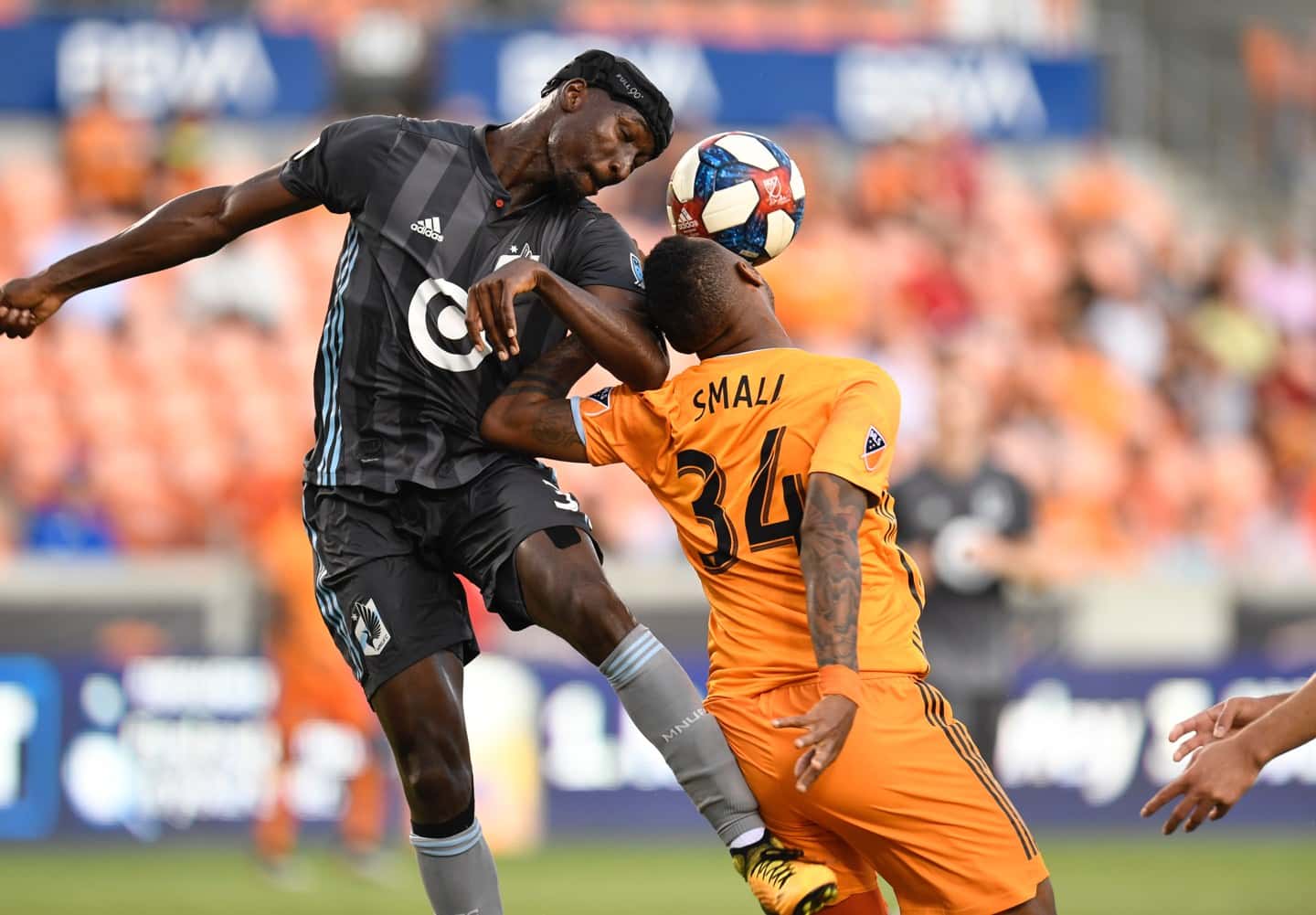 “It’s our goal to win the tournament,” said the Colombian creator, formerly of Club America and Santos Laguna south of the border. “So the games we’ve won are in the past and if we don’t win the Cup, they won’t matter at all.”

Orlando City are mired third from bottom in the MLS Eastern Conference standings and might see the 2019 Open Cup as a welcome diversion for their fans. They open the doors of their newly titled Exploria Stadium to New York City FC, who won their first Open Cup game in club history this very year. The crew from the Big Apple might be smelling silverware in the air [WATCH].

Orlando’s Sacha Kljestan – who went to a Final two years ago with NYCFC’s rivals New York Red Bulls – has been in fine form with two goals in the side’s last two Open Cup games. But the men from the Bronx have also been banging in the goals in the 2019 Open Cup, besting North Carolina FC and Wayne Rooney’s D.C. United so far with six goals in the scored column and just one conceded.

Out west, in Downtown LA, you’ll find the marquis match-up of the round, with hosts LAFC opening the doors of their Banc of California Stadium to the Portland Timbers. Both sides are flying high in the Cup and the game will be a rematch of the testy 2018 Open Cup Quarterfinal that LAFC edged 3-2 [WATCH]. 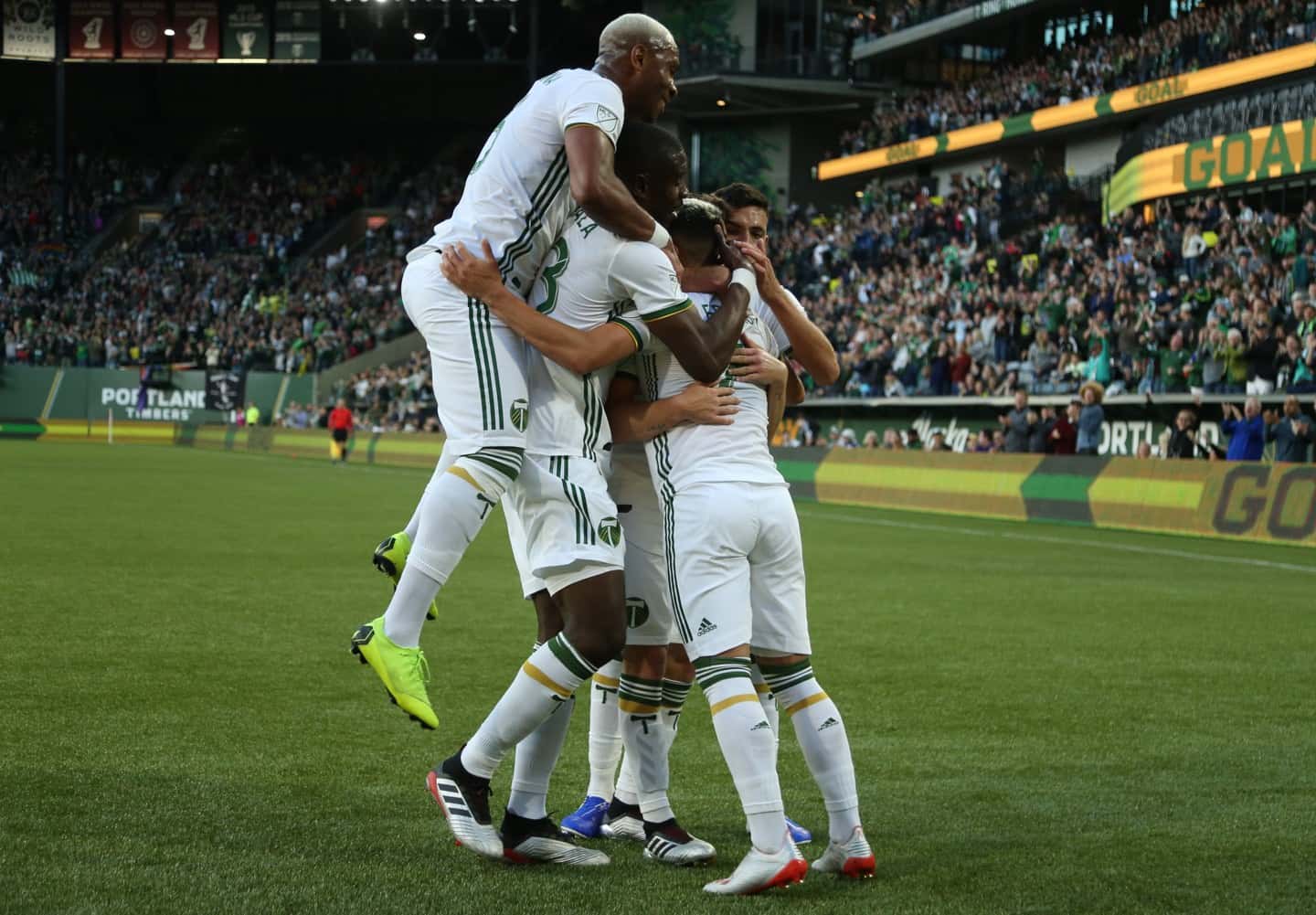 Portland Timbers are catching fire in the 2019 Open Cup

With Carlos Vela scoring for fun for LAFC and Brian Fernandez banging them in for Portland, we may just have a slugfest on our hands with a place in the Semifinals on the line for these two ambitious teams (neither of whom have ever lifted the Open Cup).

“We’ve already talked about how we’re going to really go after the Open Cup here at LAFC in a very real way,” said Bob Bradley, twice an Open Cup winner as coach of Chicago Fire. On the other side, Timbers boss Gio Savarese has his own hunger for the Cup: “We want to be a team that goes into every game with a mind to win it. If you don’t, you’re not respecting yourself, you’re not respecting your opponent or the competition you’re in.”


All games of the 2019 Lamar Hunt U.S. Open Cup are broadcast live on ESPN+. ussoccer.com is the official website of the U.S. Open Cup providing comprehensive video and written coverage of the tournament. You can follow the Open Cup on Twitter and Instagram @OpenCup and Facebook @OfficialOpenCup.