PREVIEW: USMNT Heads to Nashville for USA-Canada, Presented by Volkswagen

CHICAGO (Sept. 4, 2021)-- After fighting to earn a valuable road point in the challenging conditions of El Salvador, the U.S. Men’s National Team heads to Nashville, Tenn. for its first home World Cup qualifying match of the campaign. USA-Canada, presented by Volkswagen, marks the second of three qualifiers during the September international window as the U.S. sets off on the road to Qatar, a 14-match, seven-month journey through the rigors of Concacaf for a berth in the 2022 FIFA World Cup.

Kickoff from Nissan Stadium is set for 8 p.m. ET on FS1, UniMas and TUDN. Fans can follow the USMNT during the tournament on Twitter (@USMNT), Instagram (@USMNT), Facebook and the official U.S. Soccer App.

The USMNT started its World Cup qualifying campaign with a tough 0-0 draw vs. El Salvador in front of a raucous, sellout crowd of 29,000 at San Salvador’s Estadio Cuscatlán. It proved to be a back-and-forth affair, as both sides struggled to establish rhythm on a choppy and spongy playing surface.

The U.S. and El Salvador both showed some flashes in attack on set plays, nearly scoring on headers from their respective center backs in the opening 15 minutes. Second-half substitutes for the USA made a difference late, and Weston McKennie factored into two of the USMNT’s best chances in the 73rd and 75th, sending a header just wide and sending in a cross for Kellyn Acosta that forced the Salvadoran goalkeeper into action.

Goalkeeper Matt Turner recorded his seventh shutout in eight starts with the USMNT. After winning his first seven appearances, Turner is undefeated in his first eight games with the USA, conceding just one goal- a penalty kick in a 6-1 win against Martinique in the 2021 Gold Cup group stage.

The starting line-up carried an average age of 23 years, 282 days, the fourth-youngest WCQ line-up in the modern era and third-youngest in matches where the team had not already qualified or advanced to the next round. The only lineups that were younger came in April 1989 from the first two matches of qualifying for the 1990 FIFA World Cup. 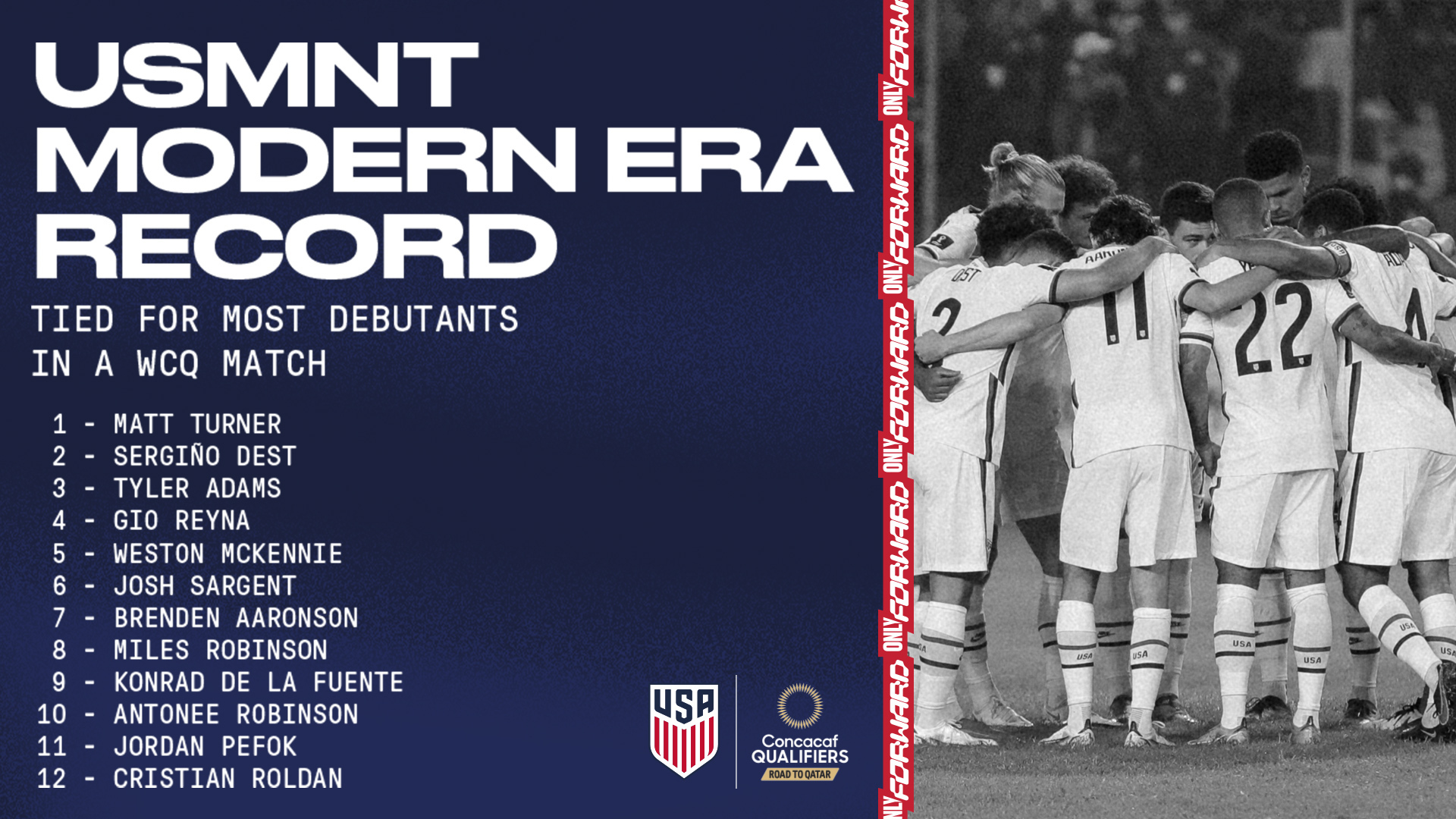 After nearly a two-year layoff from USMNT call-ups, midfielder Kellyn Acosta returned to the USMNT fold for the first time in Dec. 2020. Since then, he’s established himself as a consistent, key part of the squad as he was one of two players to lift both trophies with the USA this summer. With his appearance vs. El Salvador on Thursday, Acosta has now taken the field for the USA in 15 straight games, the first player since DaMarcus Beasley did so in 2003-04. The Colorado Rapids midfielder is just the fourth player to make 15 consecutive appearances in this millennium, joining Beasley, Landon Donovan (2002-03) and Jeff Agoos (2001-02) 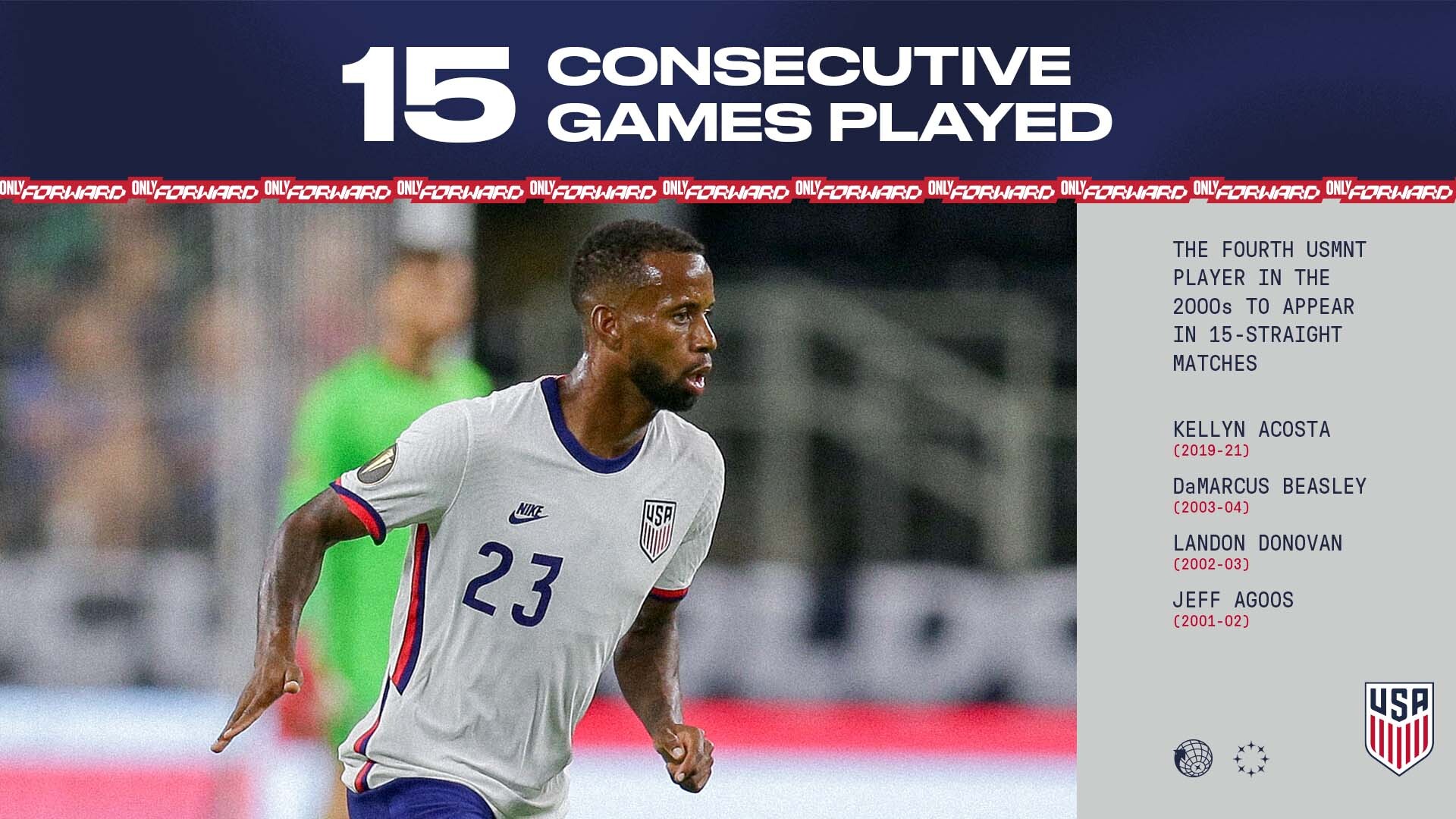 Playing in the final round of Concacaf World Cup qualifying for the first time since 1998, Canada drew Honduras 1-1 in Toronto to kick off the road to Qatar. Just before halftime, Honduras converted a penalty off of a foul by Canada forward Tajon Buchanan. Forward Cyle Larin was able to draw Les Rouges even in the 66th with his eighth goal across three rounds of World Cup qualifying, the most of the competition so far.

Ahead of USA-Canada on Sunday night, U.S. Soccer events will take place all around Nashville this weekend. Highlights include the U.S. Soccer x Budweiser Kickoff Party, which will take place on Saturday night at the Assembly Food Hall and the Fan HQ pregame party outside Nissan Stadium on Sunday night. Country artist Lindsay Ell and American pop/rock singer-songwriter Ben Rector, both Nashville locals, will perform live at Fan HQ. Rector recorded a special unreleased song for the USMNT called “New Day,” which captures the optimistic spirit of the team as it kicks off World Cup qualifying.

U.S. Soccer kicked off its “Countdown to World Cup Qualifying” with the launch of “Only Forward,” / “Solo Pa’lante,” the USMNT’s new creative campaign focused on uniting fans and the team in a collective journey to qualify for the 2022 FIFA World Cup in Qatar. 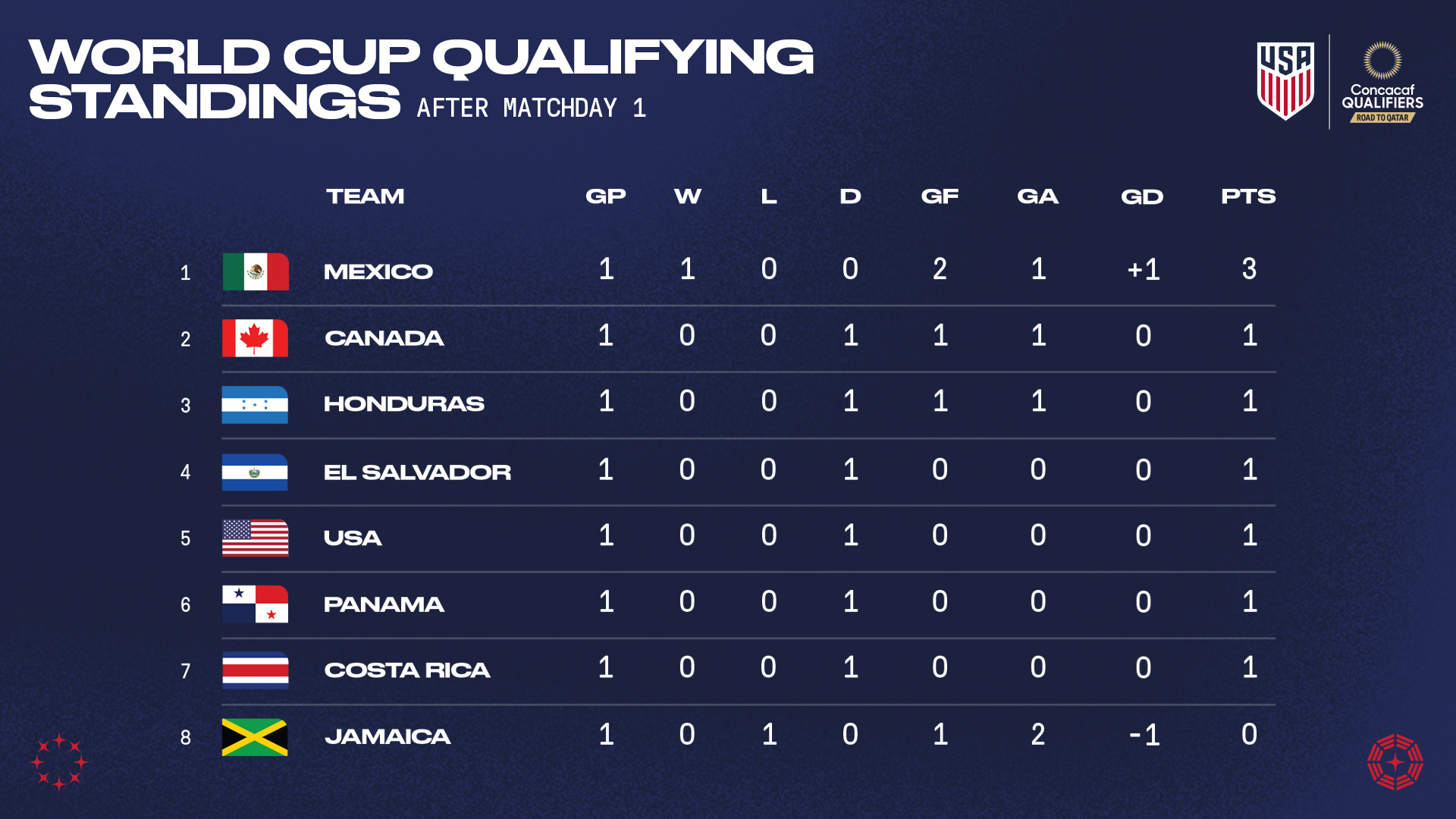 Teams qualify for the World Cup through their regional confederations, and the USMNT will have to run the gauntlet of Concacaf (North America, Central America and the Caribbean) to reach Qatar 2022. For the first time, eight teams will contest the final round of World Cup qualifying for Concacaf from September to March. The nations will play a 14-match round-robin, home and away against each of the seven other teams.

Due to the global COVID-19 pandemic, the World Cup qualifying schedule has been condensed from 18 months to seven. To accommodate the new schedule, the USMNT will play three matches during four of the five international windows rather than the usual two matches.

The USA will be challenged from the very outset in the September window. Following the difficult trip to El Salvador, there’s Sunday’s meeting with an on-the-rise Canada squad and another tough away date at Honduras.