Due to the global health pandemic, the U.S. Men’s National Team was limited to only four matches played in 2020. Even with the abbreviated international calendar, USMNT players turned in some fantastic performances for club and country and produced plenty of interesting figures for our annual By The Numbers article…

42 players were capped by the USMNT in the four games in 2020. It’s the same number that appeared for the team during 18 matches in 2019.

30 players capped during 2020 are products of the U.S. Soccer Development Academy.

28 of the players who appeared for the senior team are also eligible to participate in the 2021 Summer Olympics in Tokyo.

A record 26 combined appearances were made by U.S. players in the group stage of the 2020-21 UEFA Champions League, already the most games by U.S. players in any edition of the prestigious club competition. The previous best was 22 set in 2004-05. 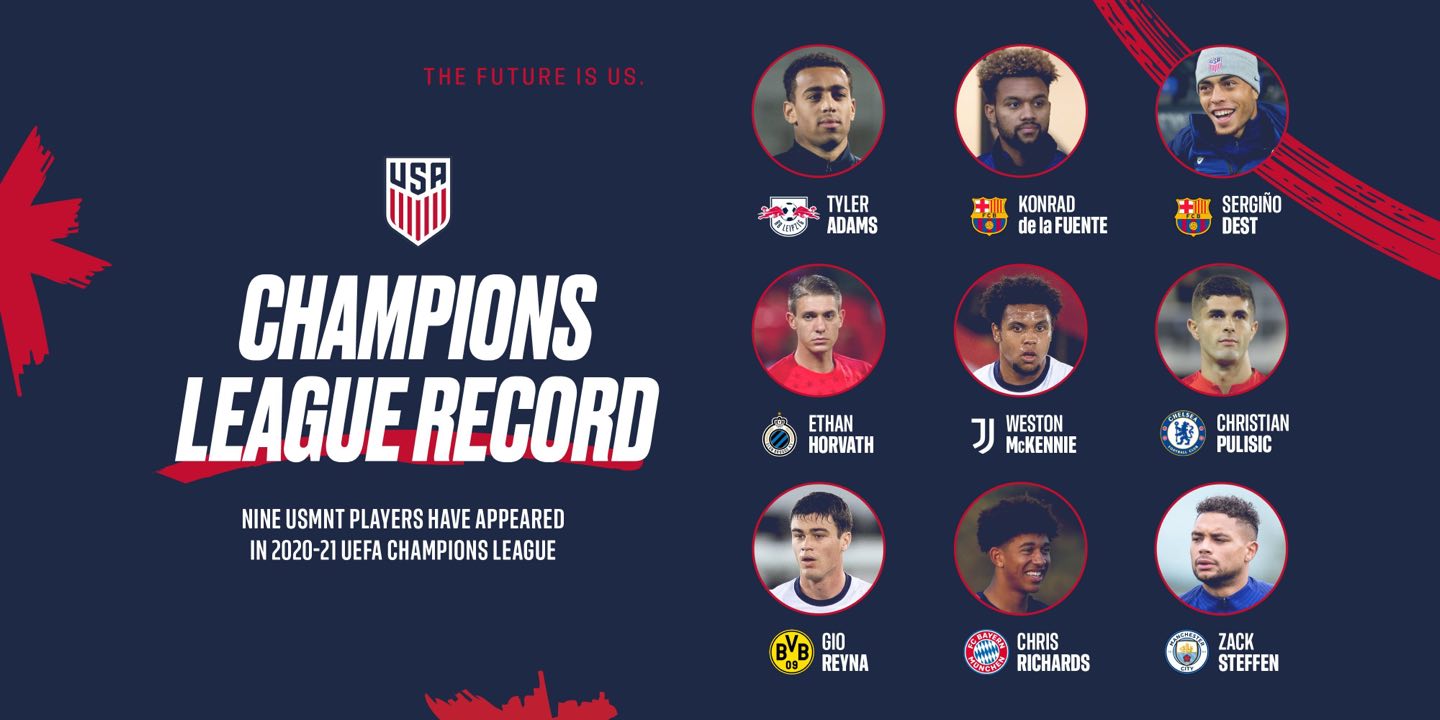 21 different players who have earned caps under Gregg Berhalter made league appearances in the top-flight of Belgium, England, France, Germany, Italy, Netherlands, Portugal or Spain in 2020:

21 players debuted for the USMNT in 2020. It’s one shy of the highest debut total in a calendar year after only 2007 (22 players). That year, the USMNT participated in back-to-back summer tournaments – Concacaf Gold Cup and Copa America – forcing head coach Bob Bradley to rely on a large pool of players (you’ll see this theme continue further down).

Of the 2020 debutants, 11 were based in Major League Soccer, nine in Europe and one – Johnny Cardoso – is based in Brazil.

57 is out of order here, but placed to emphasize the record number of players to debut in the 34 games during the current World Cup cycle. While the cycle did start earlier than normal this time (November 2017), it’s already smashed the previous record for most debuts in a cycle – 48 in the build-up to the 1994 FIFA World Cup.

18 players capped this year were part of a final U.S. roster at a Youth World Cup.

7 of the team’s 12 goals this year came from players finding the back of the net for the first time in their international career: Brenden Aaronson, Ayo Akinola, Nicholas Gioacchini, Uly Llanez, Chris Mueller, Gio Reyna and Sebastian Soto.

Occurring in just four games, it’s still tied for the second-most first-time goal scorers in a calendar year since 2009. That year, Bob Bradley relied heavily on the depth of his player pool as he managed the USMNT through a 24-game schedule featuring the final round of World Cup Qualifying, along with the FIFA Confederations Cup and Concacaf Gold Cup which were played back-to-back that summer.

6 different players age 20 and under found the back of the net in 2020, beating the previous team record set just last year. Those players accounted for eight of the team’s 12 goals, tied for the most total goals scored by players 20 and under in a calendar year (2002 and 2019).

A record 4 different players scored UEFA Champions League goals during the calendar year. Tyler Adams kicked things off with his late game-winner in RB Leipzig’s 2-1 victory against Atlético Madrid in the 2019-20 quarterfinal on Aug. 13.

Sergiño Dest, Christian Pulisic and Weston McKennie have each tallied in the current edition.